If it’s not children testing new toys, teenagers watching other teenagers playing computer games or cats falling off roofs, in my mind the next most popular offering of YouTube entertainment is motorcycling videos. And over the last couple of years since the beginning of April 2018 we’ve published almost 300 videos on our YouTube channel which have accumulated over 16 million views with our subscriber base growing by 52k up to almost 75k.

So, what better ways to spend the next few hours than looking over the mixture of bike launch reviews, group test analysis, product testing and interviews, or you can take a look over our top 10 most popular motorcycle videos in terms of views over the last two years. Click on any of the below links to be taken to the video and description:

1. How much faster is a professional motorcycle racer?

5. Tight & Low-speed U-turns on a motorcycle

7. How much should you pay for a motorcycle helmet? | Cheap vs Expensive 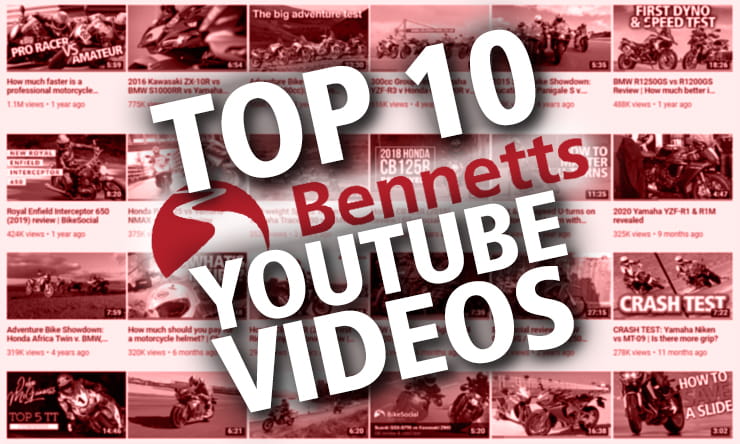 1. How much faster is a professional motorcycle racer?

At Cadwell Park in September 2018, the 2016 British Superstock Champion and current TAS Racing BMW BSB racer, Taylor Mackenzie, was equipped with the same completely standard BMW S1000RR and datalogger as BikeSocial's Michael Mann who represented the average Track Day Fast Group rider. But how much faster is the pro, where and how? For the full data analysis and lap times head, click here. Otherwise, here’s the video:

How much faster is a professional motorcycle racer?

Also in September 2018, around the world adventure rider, Nathan Millward, joined BikeSocial regular contributor Simon Hargreaves, photo-rider, David ‘Chippy’ Wood and our very own Michael Mann in a Top Gear-style trip where, with a hypothetical £13k budget each rider had to choose one of the latest on/off-road adventure bikes under 1100cc and meet up in Wales. Here are the individual reviews and below them is the video of the trip:

BMW’s R1250GS was the most important bike of 2019. It’s likely to be might be the most important bike of the next ten years too. Its predecessor, the R1200GS, is the most popular bike of the last decade by some margin; BMW have sold hundreds of thousands around the world since 2004, and owners have ridden them round the world too. So, BikeSocial contributor, Simon Hargreaves joined Michael Mann to performance test the two back-to-back on the dyno, with a datalogger plus explain how the Shiftcam system works. Click here for the full review and analysis but for the video, well that’s just here:

One of the company’s first twin cylinder bikes in 50 years has made a significant mark on the sales charts since it was launched in Q3 of 2018. Starting at a very attractive £5500, the 47bhp A2-licence friendly and 100mph machine was an instant hit, mainly because of its build quality too. Off we trotted to the press launch on the West Coast of the USA, and below are our first riding impressions but here’s the link to the full review:

5. Tight & Low-speed U-turns on a motorcycle | Learn with MotoGymkhana

It really doesn’t matter what you ride – from Harley to adventure bike or Grom to Hayabusa – MotoGymkhana is all about low-speed skills. But that’s not to say it’s slow, dull or boring; navigating the tight array of cones takes huge levels of skill and concentration. Born in Japan, but now with competitions across 15 countries, MotoGymkhana events – be they practice days or competitions – are usually carried out on a closed tarmac area, like a section of Donington Park race circuit, where John Milbank had his first go at the sport. For his review click here, or for the video… well, that’s right here:

Tight & Low-speed U-turns on a motorcycle | Learn with MotoGymkhana

BikeSocial takes a closer look at Yamaha’s all new 2020 YZF-R1 and YZF-R1M. Featuring all-new MotoGP-inspired bodywork, the new YZF-R1 comes with its most impressive specification to date. Refined suspension as well as several new electronic rider controls. And for 2020 the YZF-R1M features new NPX gas forks, as well as ultra-light carbon bodywork and updated electronics. Prices have also been revealed for the new models with the YZF-R1 costing £16,799 and the exclusive YZF-R1M coming in at £21,999. Full test and review now live, click here.

7. How much should you pay for a motorcycle helmet? | Cheap vs Expensive

With brands like LS2, MT, Box and others offering motorbike lids for as little as £50, is it worth spending £200, £400 or even £700 and up on an expensive brand like Arai, Shoei, Schuberth or others?

What is the safest helmet? Why are some more expensive than others? What is the best? In this video, we'll show you why some helmets cost more than others by cutting them open and looking at the materials and technology that go into them. To read our honest, unbiased and in-depth reviews of all the leading motorcycle helmets, from £50 to £1,000, click here.

How much should you pay for a motorcycle helmet? | Cheap vs Expensive

Back in 2008 Honda told the motorcycling world about their CB900F Hornet replacement, yep you’ve guessed it, the CB1000. Back in the day it was powered by a 998cc, liquid-cooled, 4-cylinder detuned 2006 Fireblade engine making 109.44bhp.

Fast forward to 2018 and the evolution created a revelation. Still using the same old motor as its base but with some key updates, the CB1000R and ‘+’ sized model offer 143.5bhp for under £12,500. Since this press launch video (click here for the accompanying review), we ran one as a long term loan bike and the reviews are in this folder.

Ducati’s revolutionary Panigale V4 was ridden in anger in early 2018 and ever since the fans have been calling out for a naked version. Well, their dreams became a reality when in October 2019, Ducati unveiled the Streetfighter V4 via a few select journalists in Rimini and the rest of the world via livestream. Our roving reporter, Adam Child, was on in Italy reporting and his video has made it into our Top 10. Since then, we’ve been able to ride one of the first bikes in the UK, just a matter of hours before the COVID-19 lockdown. Here’s the full review including its own video.

With two wheels on the front and claims of an 80% greater contact patch, can you crash the Yamaha Niken? Short answer… yes, you can. So what’s the point in it?

CRASH TEST: Yamaha Niken vs MT-09 | Is there more grip?

Next four most popular