Where are the Diesel Bikes?

Diesel isn't exactly flavour of the month is it? VW is still reeling from its emissions scandal,  while the price of fuel has tumbled (though for how long is anyone's guess). So the prospect of a diesel motorcycle looks further away than ever. And the concept has always had its sceptics – why would anyone remotely interested in performance pay extra for a heavier, slower and less responsive bike? 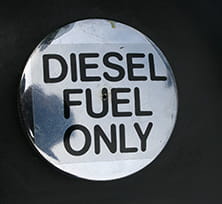 It's a fair point, but over the years there have been plenty of attempts to build a diesel bike, some with car engines, others with off-the-shelf singles; some were the result of burning midnight oil in a garden shed, others were serious commercial prospects.

Welcome to the strange history of the diesel-powered motorcycle.

The first ever diesel bike was  the Lohmann, a clip-on engine designed to bolt onto bicycles. Built in a war ravaged Germany from 1950, it was an intriguing little device of just 18cc, but quite high revving and capable of pushing a cycle along at 20mph. Weirdest aspect of all was the moveable cylinder barrel, which enabled you to adjust the compression ratio on the move. I've ridden one, and it works, but I can't vouch for the official claim of 350mpg.

The diesel bike story then moves to the UK, where in the early 1950s a Mr Freeman Saunders converted an ex-WD side-valve Norton to diesel, no doubt with very similar power characteristics to the original. Mr Saunders reckoned it would top 65mph solo, and manage 140mpg with a sidecar attached. Alas, as the age of rip-snorting British twins took over, a diesel bike had even less appeal, and Mr Saunders' Norton disappeared without trace.

Fast forward 40 years or so, and something called the Boccardo Aero Diesel was being developed in France. It was a big, slab-sided thing, with a barn door fairing and power from a Citroen 1.4 litre diesel engine, running through a BMW gearbox and shaft drive. As a truly European tourer, it all look promising, but somehow it all fell apart. And Louis Boccardo, the man behind it all, disappeared, allegedly along with some government funding... 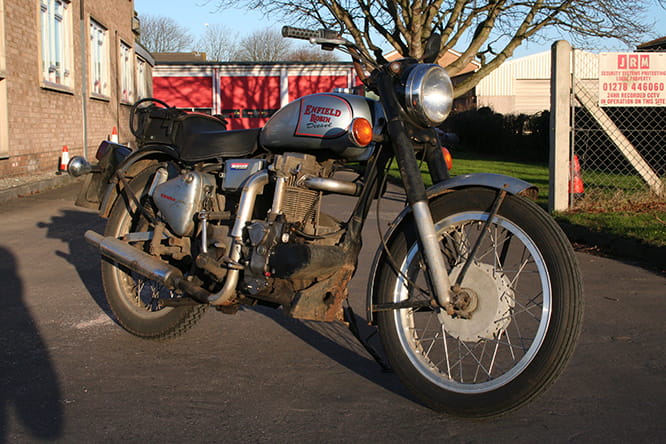 However, the diesel motorcycle was about to find its niche, and it was far less grandiose then the Boccardo. The Indians had been building diesel-powered Enfield Bullets for years, and Telford-based engineer Ernie Dorsett came up with the UK-assembled Enfield DR400. The Enfield Bullet's pre-unit gearbox meant a single cylinder diesel could be bolted in without disturbing the transmission – intended to run at a constant speed all day powering generators or water pumps, these engines proved ideal, if a little short on power. The DR400's 412cc single mustered 8.5bhp, enough for a 50-55mph and sixty-five flat out. But it could also manage 180mpg and had a very relaxed feel to it. Other Enfield diesel conversions followed, and it turned into the most successful diesel bike of all – you can still buy a new one, from Price Part Motorcycles near Bristol.

That's all very well, but even the Enfield diesel's best friends would admit that it's slower than a very slow thing, lovely on a quiet B road but not able to keep up with modern traffic. But a modern diesel bike, with a purpose-designed engine, was about to break cover. Two engineers at Cranfield University developed a four-valve single of 670cc and 33bhp. Mounted in a Kawasaki KLR chassis, it had decent acceleration, reached 75-80mph, and still gave nearly 100mpg. It was intended as a military bike, and a batch were eventually built in the States for the US Marines. 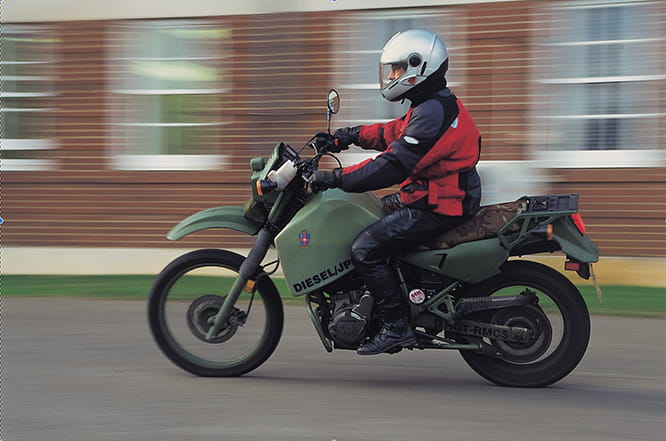 Back in Europe, the Neander power cruiser was unveiled in 2005. This was different again, with a turbocharged 1430cc twin offering 129lb ft at just 2600rpm, and twin crankshafts which were claimed to eliminate vibration. They also claimed a top speed of 138mph and 0-62mph in 4.5 seconds, plus a price tag of around £50,000. It worked, but there were few takers, and Neander is currently developing the motor as an upmarket outboard.

The Track T-800 looked like a more practical proposition. Built in Holland from 2010, it used the little Smart car diesel, an 800cc turbo-intercooled triple that was lighter and more compact than any other car diesel engine (important for a bike). The Track looked good on paper, claiming 100mph and 80mpg. Built as an adventure tourer with shaft drive and CVT transmission it should have been a true diesel alternative to BMW's GS, but the £16,000 list price put off buyers. 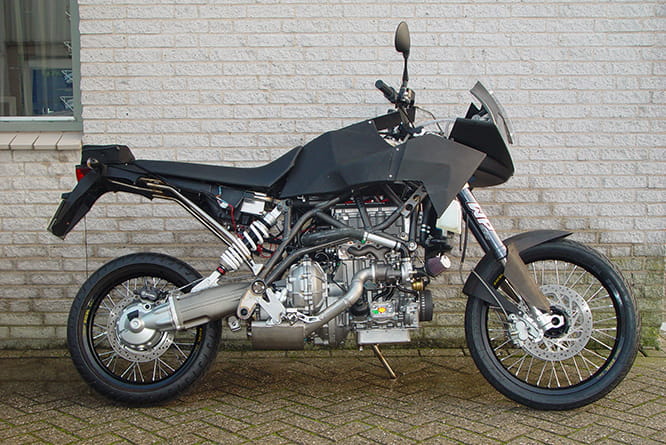 The year after, Belfast software engineer Neil Laughlin fitted the same Smart engine to his Triumph Tiger, mated to a Harley gearbox, and (get this) rode it to Nepal and back to prove the concept. When he was back, I test rode it. The Tiger diesel was heavy, but easy to ride, fairly quick, and a day blatting around Northern Ireland returned 99.6mpg. 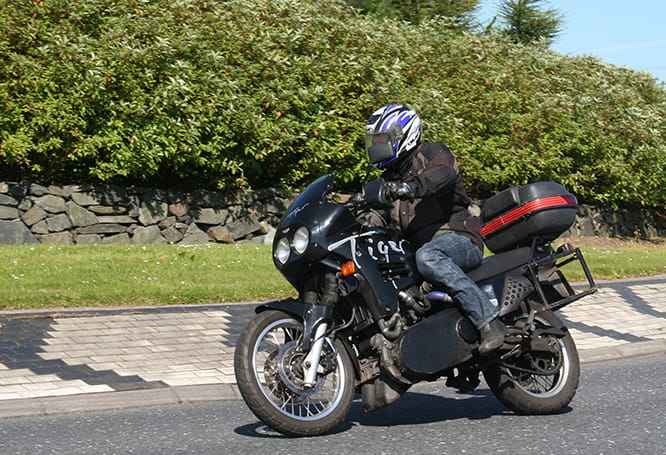 None of these bikes reached production, though rumours persist that the Cranfield/US Marine bike will be built in India. Reborn as the Altius Scimitar 670  in civilian form, the would-be maker claims it would cost only £2500 or so in the sub-continent. There's no sign of this happening any time soon, but at that sort of price, with a 400-mile range, it would certainly make sense, especially for overlanders.

In the meantime, there's no sign of a diesel bike from BMW, Honda or any of the major players, and it's not hard to see why. We all love torque, which diesel certainly delivers, but most of us still worship horsepower and acceleration times, which it doesn't. You get better mpg from a diesel, but that's not a big issue for most riders buying what for them is a leisure toy. As for the commuters, a simple 125 can already offer over 100mpg, so a diesel equivalent doesn't have much appeal for them either.

But could the diesel motorcycle still have its day? Given the way that oil prices have pogo'd up and down in the past few years, in an increasingly uncertain world, I'd say yes.

Have you ever ridden a diesel bike? Tell us about it.  or