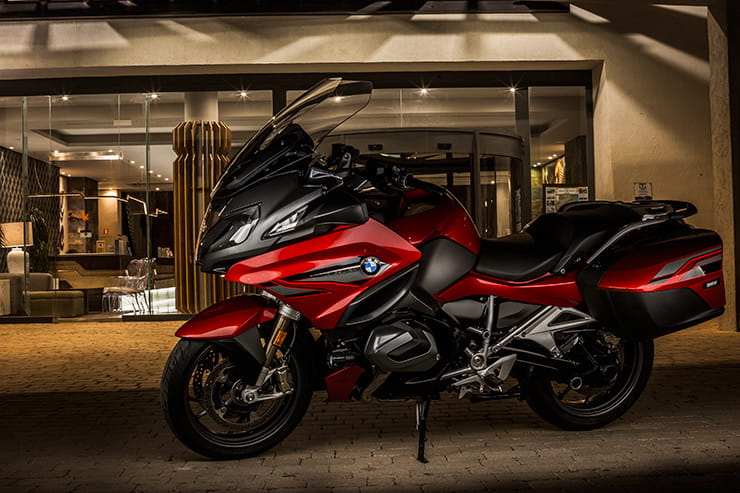 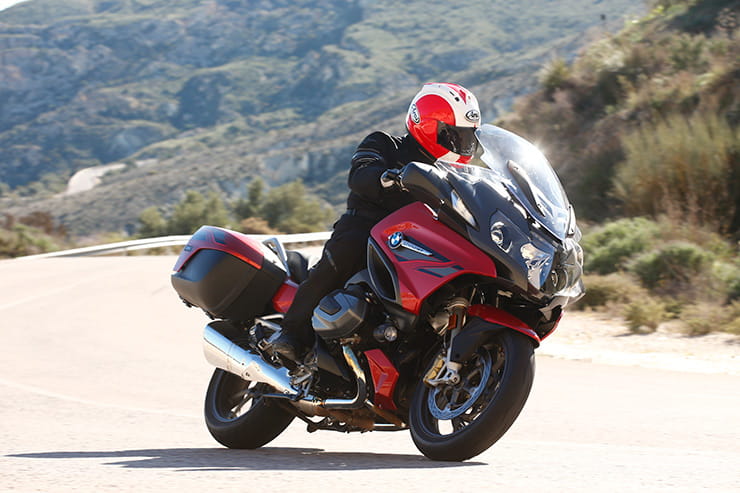 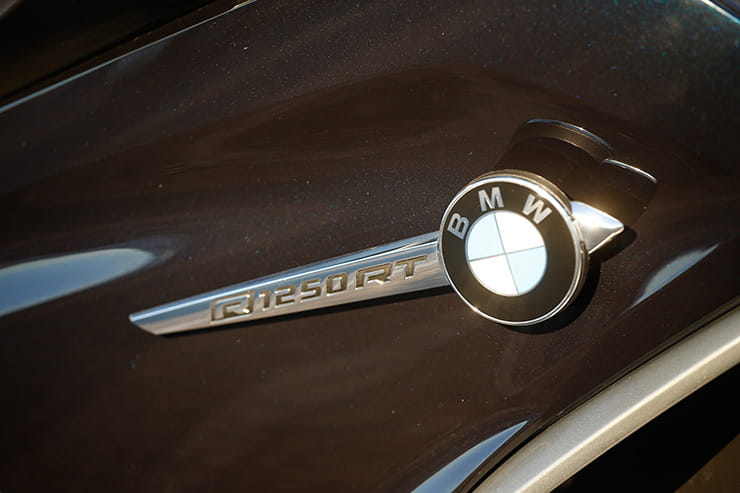 BMW’s boxer story, across virtually its whole range of adventure bikes, roadsters, tourers and so on, in the form of the GS, R, RS and, here, the RT, is all about one thing – the new ‘1250 ‘ShiftCam’ engine. Elsewhere they’re little different, but the power and torque boost the new engines deliver is a radical and welcome improvement – and that’s especially true of the RT. 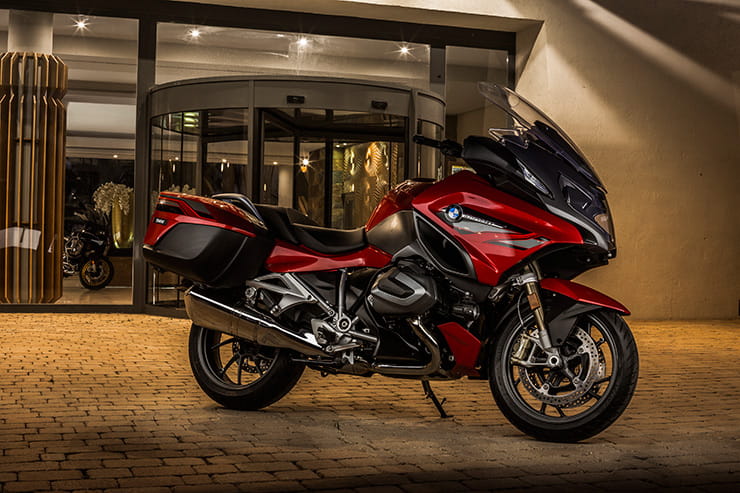 At a glance, BMW’s new-for-2019 RT is little different – but the changes they’ve made are significant

With the outgoing 1200RT starting at £13,350 while the new 1250 begins at £14,415, it’s a fairly hefty lump added onto the price even before you start talking about spec and options – but we think it’s worth it for the improvement the new engine brings. Beyond that, ‘you pays your money…’ The RT being a premium tourer, more than most Beemers, benefits from having the options catalogue thrown at it, and BM’s ‘Dynamic ESA’, onboard computer, audio system and more are definitely attractive options. Trouble is, to snag them all you could easily be paying £18K+… 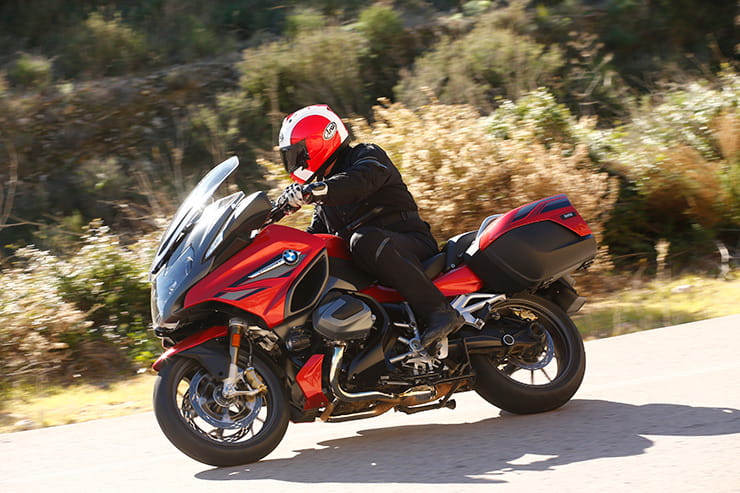 If the old RT could be criticised at all (and that wasn’t easy, it was so far ahead of its rivals), it was probably in terms of performance, with the outgoing 1154cc twin a little lacking both for top end performance and sheer grunt, especially when fully loaded. Which is why this ‘ShiftCam’ performance boost, of 14% in peak torque and 9% in power, up to 134bhp, is so welcome. Sure, it’s still no GTR1400 missile or K1600GT jet, but no longer does it feel a little lacking or leave you wanting for more. 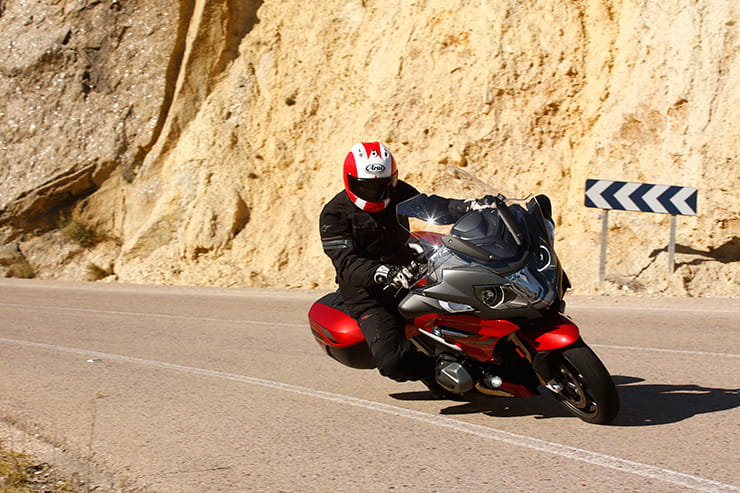 A tourer it may be, but the boosted RT now has enough performance to deliver genuine thrills

It’s been talked about, seemingly endlessly before, but ‘ShiftCam’ is remarkable system. Apart from the additional 84cc, the boxer twin gets an all-new head, which now has two cam lobes per valve rather than the traditional one. The first, softer profile is for grunty, low-down performance, the second, pointier one, to maximise peak power at higher rpms. In other words, no longer is the one profile a necessary compromise between low and high rpm performance. The really clever bit, though, is the seamlessly slick shifting mechanism, which slides between the two lobes at either 5000 or according to throttle load. It works brilliantly so much so that not only is it gruntier and more powerful, the new boxer is also smoother than ever as well. 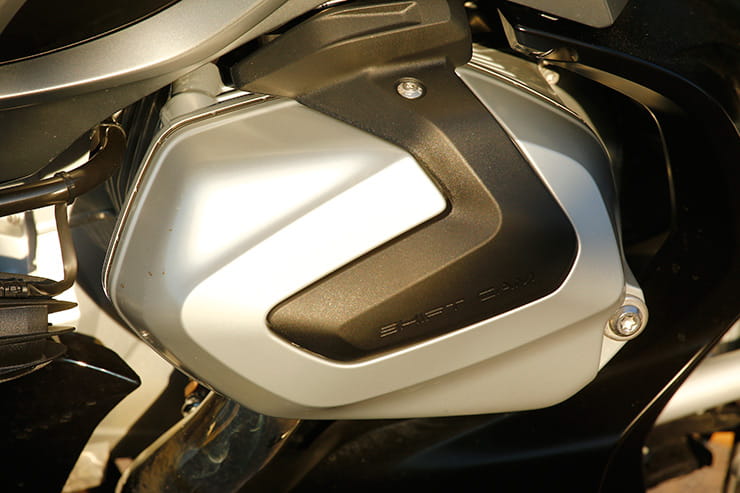 Like the new GS (and forthcoming R and RS), the RT’s boxer is now 85cc bigger and, most importantly, boasts a ‘ShiftCam’ head

BMW claim around 59mpg for their new boxer, but that’s on a somewhat artificial cycle. During our test, which admittedly saw the bikes being ridden far harder than you’d normally expect in order to fully explore the performance of the new power unit, the on-board computer displayed figures as low as 39mpg. Overall, though, in normal use, and considering the type of riding most RT owners do, well over 50mpg – with a 300+-mile range to match – should be achievable. 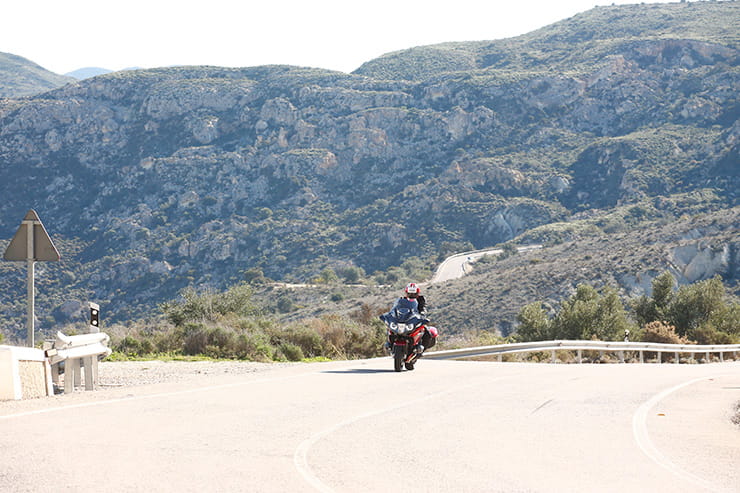 There’s no changes here whatsoever for 2019 so the RT’s handling characteristics and ride are unchanged, too – but that’s really no bad thing. The RT may appear big and heavy but from the saddle has always proved to be a remarkably lithe, nimble and engaging handler with a sumptuous, stable ride, light, precise steering and thoroughly intuitive manners. It might not look it, but the RT isn’t just built for comfort, it can truly hustle as well, especially one-up. Dial in the extra ease and options of the Dynamic ESA electronic system and you can also flick between cruise and ‘scratch’ modes at the press of a button. 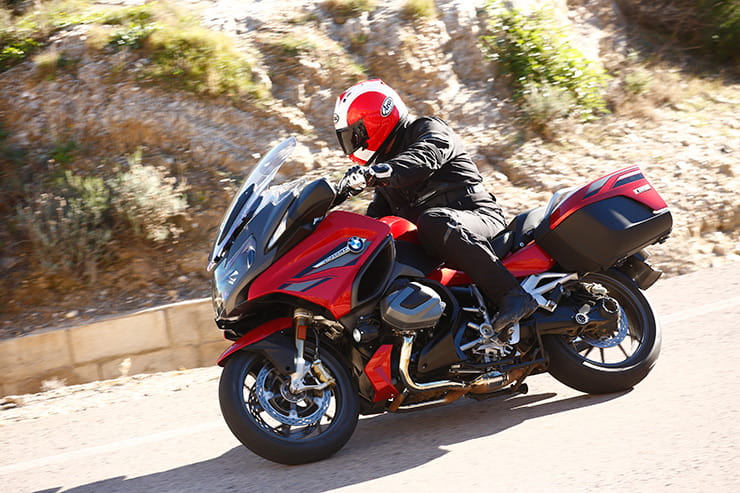 Chassis-wise little is different – but that’s no bad thing: the big RT has always defied its bulk to prove nimble and engaging

Engine apart, this is one of the few areas where there’s another significant changes with the 2019 RT. Presumably to cut costs (and BMW’s representative couldn’t give any other explanation) the new 1250 has switched from the coveted Brembo radial four-piston caliper set-up at the front, to a virtually identical system, but for the first time with calipers branded ‘BMW’ but actually made by American newcomers Hayes. In truth, for 99% of the time, you can’t tell the difference (although one side-by-side test did reveal the new brakes were slightly outperformed by the old). Even so, there’s no getting away from the fact that, especially for a supposedly premium tourer, it’s a disappointing move. 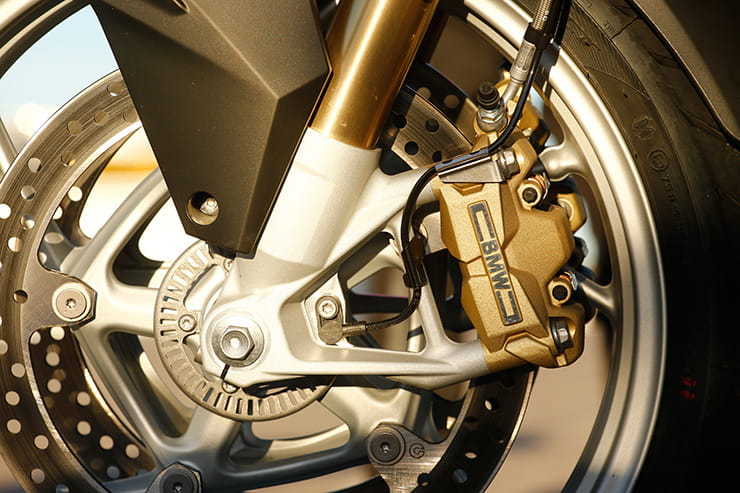 Cost-cutting move from Brembo to Hayes (but BMW branded) front calipers is undeniably retrograde, but only the keenest brakers will notice any difference

OK, there may be no changes here, either, for 2019 – but who cares? Tourers simply don’t get more sorted or comfortable. As before, the RT’s seat is sumptuous, height-adjustable (with further height variants available as options) while it’s ergonomics are beyond reproach. What’s more the enormous, electrically-adjustable screen makes you feel like you’re riding in a Plexiglass cocoon while, if you want to pay the extra (and most do), heated grips and seat are available as options. Long-distance comfort simply doesn’t get any better. 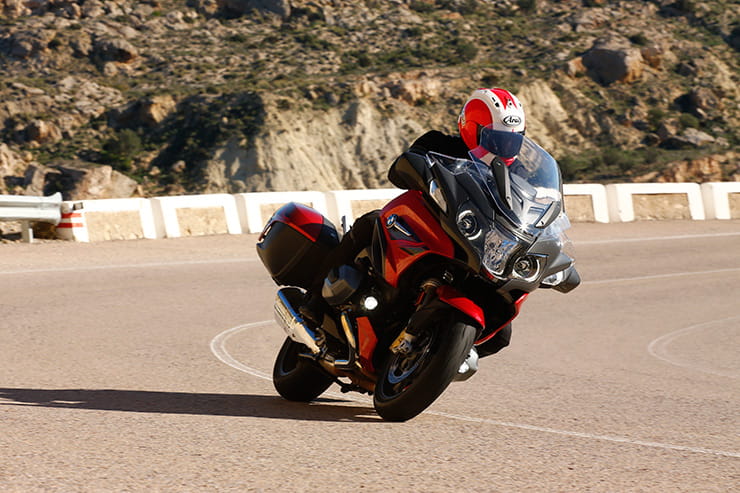 If you’re covering serious miles, the sumptuous seat, great ergonomics and barn door fairing makes the RT a blissfully comfortable place to be

As with nearly all BMWs, the question of equipment is a bit like asking ‘How long is a piece of string?’ There’s as much as you want or are willing to pay for. And most do. Yes, the base RT costs £14,415 and you get, naturally, the new engine, two riding modes (Rain and Road), ASC, hill start and ABS Pro for that. All in plain white paint. But virtually no-one will go for that. At the other extreme, though (from £18,480), the LE version has metallic paint, ESA, extra riding modes, keyless ignition, audio system and more. Other variants with varying spec are available in between and we’d certainly recommend getting the extra modes and ESA as a minimum. 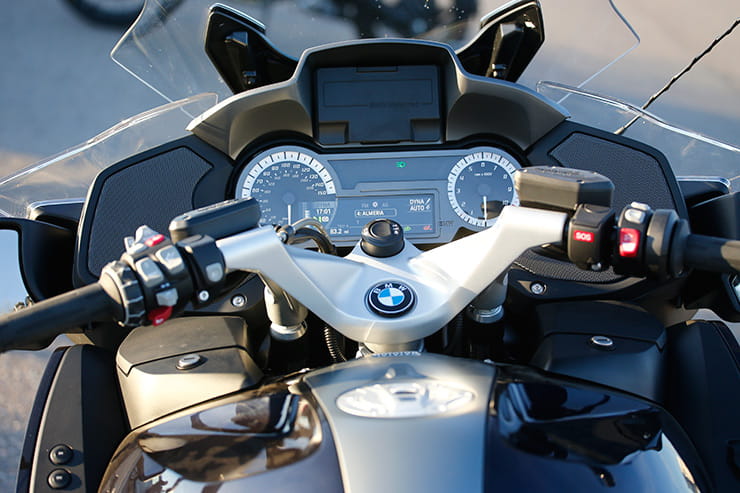 Not much change here, either – and again, it all depends on spec. On board computer and ESA really make themselves felt on this kind of bike, though 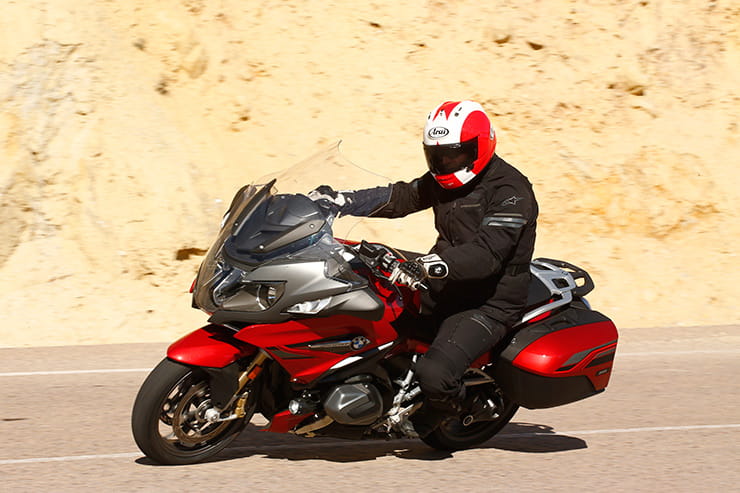 The RT was always a brilliantly competent, superbly able bike – possibly BMW’s best – and the performance boost makes it better than ever

BMW’s 1200 boxer RT has been virtually unchallenged as a superlative tourer ever since it was first unveiled in 1200cc form in 2005. After an update in 2013 it received a major redesign into its current form in 2013 and, despite an initial glitch requiring a clutch recall, it has remained head and shoulders above the rest ever since, so much so that it wasn’t just the best tourer around it was arguably BMW’s best bike, period. The only reason it didn’t get the recognition and sales that suggests it deserves was due a drab image and the more limited appeal of tourers compared to, say, adventure bikes. But if it could be criticised at all it was in its peak performance. Now that’s changed. Dramatically so. Those changes may not be enough to convert you from your GS (especially as its adventure stablemate gets the same ShiftCam power unit for 2019), but they do make the RT better than it has ever been.

Three things I loved about the BMW R1250RT… 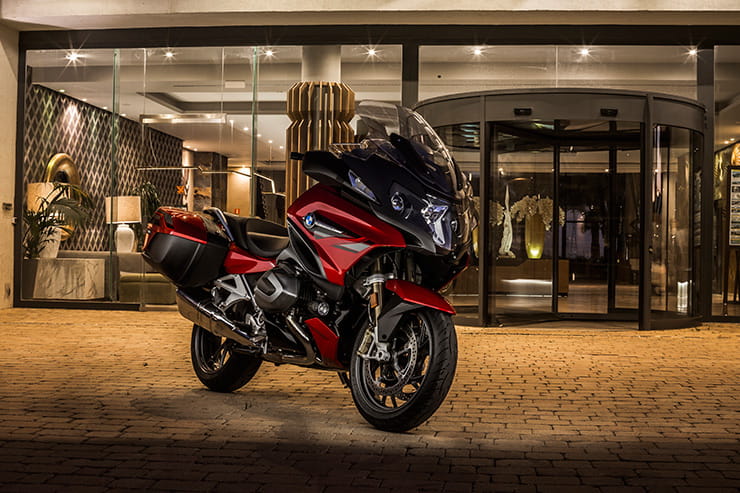 The RT has few true rivals as a pure tourer – especially with the demise of Triumph’s Trophy. Now it’s even more clearly head and shoulders above the rest