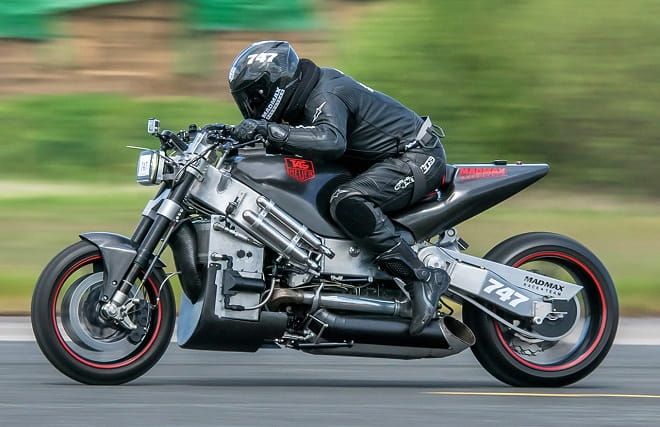 Kawasaki’s Ninja H2R has rarely been out of the headlines for its rather epic supercharged 326bhp rocket ship of a bike and kudos to the Japanese firm’s engineering and Public Relations departments for creating the hoopla. However as we know it’s not road legal, emits vast amounts of noise and requires regular engine rebuilds.

Meanwhile, on a 1.9 mile long airfield runway in Yorkshire last weekend a Street-fighter with indicators, a mud guard, registration plate holder, high and low beam and the other necessary requirements to make it road legal hit 233.7mph – setting two world records along the way: Fastest Turbine Bike and Fastest Streetfighter. It was powered by a turbine engine from an Augusta 109A 6-seater helicopter, called the Rolls Royce 250-C20B.

Watch the on-board from the record-breaking run:

You don’t ride a turbine-powered bike, you pilot it apparently. And even then you need a gadget to keep your head attached to your body given that it’s a Streetfighter style i.e. naked machine producing 542bhp at the rear wheel.

Two days later and I’m sitting in a lock-up on the Silverstone grounds belonging to the Spyder Club, the specialist member club where riders can hire all sorts of high-end motorcycles, with the man who designed, engineered, built and piloted the bike to its new records. It’s pouring with rain outside but Zef Eisenberg is beaming from ear-to-ear. 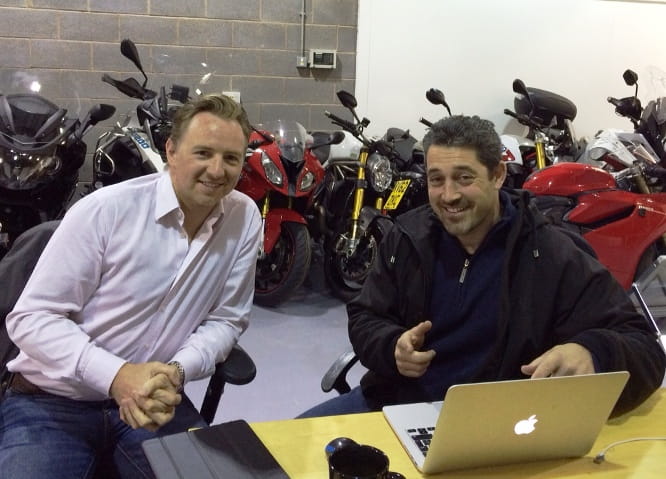 He’s the 42-year old former bodybuilder who founded the sports food company MaxiMuscle. Having sold it to GlaxoSmithKline in 2011 for a tidy sum he needed a new challenge. He told me: “When you wake up in the morning you need a purpose. So I woke up one day and decided that a turbine-powered motorcycle was a sensible idea.”

The team got to a stage where everything was completely redesigned from the gearbox to the front end. The costs were escalating towards £200,000, a figure that prevented the finished article becoming a Europe-wide customer bike, not helped by EU type approval tests becoming increasingly stringent. So Eisenberg's engineering company, Maxicorp Autosport, and MTT went their separate ways with the Guernsey-based team focused on building a very powerful, high-end Land Speed Record and show bike. The MADMAX Race team was formed to demonstrate its capabilities. The MADMAX name is actually trademarked and owned by Zef, with Warner Bros being allowed to use the name for the film.

Eisenberg continues the story: “Since those early days we’ve pushed and developed every area, allowing us to build and perfect the bike to be incredibly powerful and reliable. It’s taken four years of trial, error and frustration and far more money that we ever expected. There is no manual for this kind of thing!”

The turbine is a 250-C20B Turbine from Rolls Royce, with a few hundred hours left on it, making them too expensive to overhaul, but perfect for land use. The turbine and its fuelling system is then modified to run in an upside Position. A brand new C20B would cost in excess of £350,000 but because the team are professionally trained on the 250-C20B turbines and the relationship with Rolls Royce is good, access to low life Turbines are possible.

The turbine is capable of reaching 540bhp by adding more fuel, which in turn makes more power. However in such circumstances the turbine would overheat which would melt the blades so a sophisticated water/methanol mixture is injected directly into the inlet to keep the turbine cool and stop it overheating. The team have a remarkable 60 sensors operated via  a bespoke ECU computer they have developed, which monitors all turbine parameters brake pressures, and so on allowing the ECU to shut down the turbine if anything goes wrong within a hundred of a second. 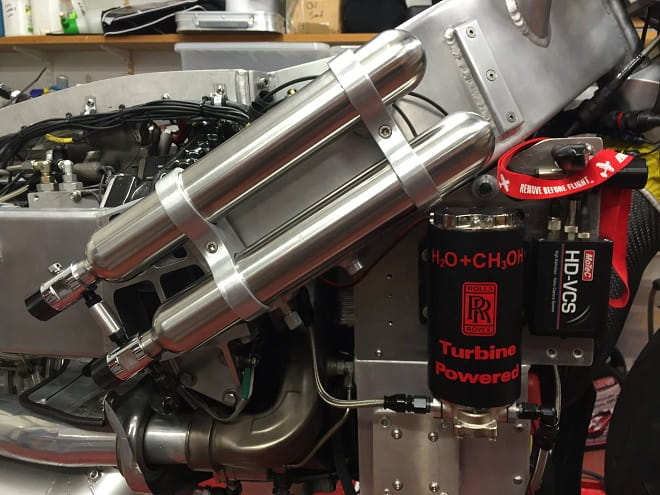 Importantly the turbine is a shaft turbine not a thrust turbine. Thrust is what you associate with an F-16 fighter jet propelling itself via thrust with a large blue flame. The thrust in a shaft turbine directs itself to an impeller, called a Power Turbine Wheel, which turns the helicopter blades. The MADMAX men have created their own clutch and gearbox which converts the turbine output shaft into a conventional small sprocket and rear sprocket which makes its wheel-driven.

Eisenberg confirms, “That makes the bike road legal because there are no flames!”

Should you find yourself on a turbine bike on the road here’s some advice; you only have one gear and ’idle’ will see you doing 80mph. Turbines make so much torque there’s no requirement for a conventional gearbox, you only need one speed.

This particular turbine can produce in excess of 1000 ft-lb of torque at the rear wheel at full power (a new GL1800 Goldwing makes 123ft-lb). You can’t accelerate aggressively from take-off otherwise it would spin the wheel and you wouldn’t go anywhere! In fact when tested on the dyno the team found that the wheel just spins up even with full straps and dyno braking. The bike runs on standard Continental Race Attack rubber because they are the only ones that offer a 240 rear size and have coped with such high speeds. After every run they are inspected vigorously for any irregulaties to ensure they are still safe to use 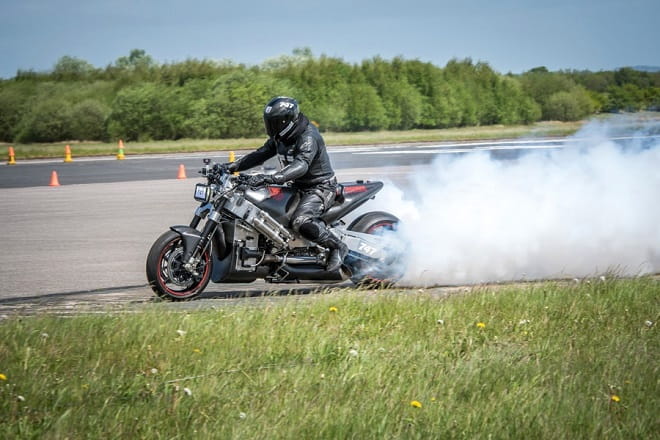 At full chat the bike covers 340 feet per second so it covers plenty of ground when the throttle is rolled off and there’s no engine braking. In fact the power keeps surging for another 1-2 seconds.

Eisenberg explains: “The problem we have is that the rear wheel is connected to the power turbine wheel so the rear wheel is in essence the same as the helicopter blades. It means you have no engine braking when you roll off the throttle. So we require massive amounts of braking to slow the momentum and inertia of the rear wheel/turbine meaning you’re relying on the rear brake more so than ever.”

Its fuel economy isn’t great either! It’s been modified to run on straight pump diesel but when the team are on a high speed run and are looking for the cleanest burn and no soot Kerosene is the preferred source.  Eisenberg said: “It’s basically like a giant advance oil burner so anything you stick in it will burn so you can chuck-in petrol, whiskey, Drambuie, chip fat, anything!”

During the development phase the team concentrated on weight saving by manufacturing many of their own parts including the ECU, sensor pads, fuel control unit and all the wiring. Even the fuel tank is carbon/Kevlar which contributes a mere 2kg in weight to the original 220kg. That became an issue when equipped with 500+bhp, so recently extra weight was added to stop it flipping!

A concentric swing arm design means the chain has a consistent tension because the swingarm and small sprocket share the same pivot point. This allow us to run a standard 530 (Non-0 ring) drag chain,aiding weight loss and minimal horsepower loss.

Last August the team ran into trouble at 190mph.

Eisenberg was at the helm and struggled to keep his helmet in place such was the wind resistance, eventually the chin guard almost covered his eyes which is less than safe of course. Eisenberg continues the story: “We ended up strapping the bottom of the helmet to a climbing harness wrapped around my waist to keep it in position. Then, at 220mph there was so much force on the helmet that it was compressing the vertebrae and pushing a disc out which felt like a stabbing pain in my neck. So now we’ve made a neck brace too. These things are the kind of things you can’t pick up along the way, not on the dyno at least.
And that’s part of the reason why we have so many sensors on the bike where we download every bit of information after every run.”

With the vibrations and turbulence at 220mph+ on a naked bike (no fairing) the pilot can’t read the display on the dashboard easily, as the eyes can’t focus from the turbulence and the brain can’t register quickly enough, particularly when covering 340 feet per second. So what was the solution?

“We developed a race dashboard, with all the information blocked out except for lights. Blue LED’s indicate speed and red for warnings. When I cross the finish line the whole dash flashes red because it would be easy to brake too late, at that speed. There’s only a tiny amount above the dash that I can see out of my visor while I force my helmet into the foam pad on the top of the tank.”

After the first runs last Saturday the team had only achieved 225.6mph, a fraction over what they’d managed last August (224.9mph). They worked out for an increase of 8mph, an extra 100bhp was required. Saturday evening was spent tweaking the turbine for maximum power by increasing the fuel flow and water/methanol injection to stop the turbine from over heating. The team managed to eek out what was required to achieve 231mph on the first run. Job done, with the best speed of the day being increased to 233.7mph. 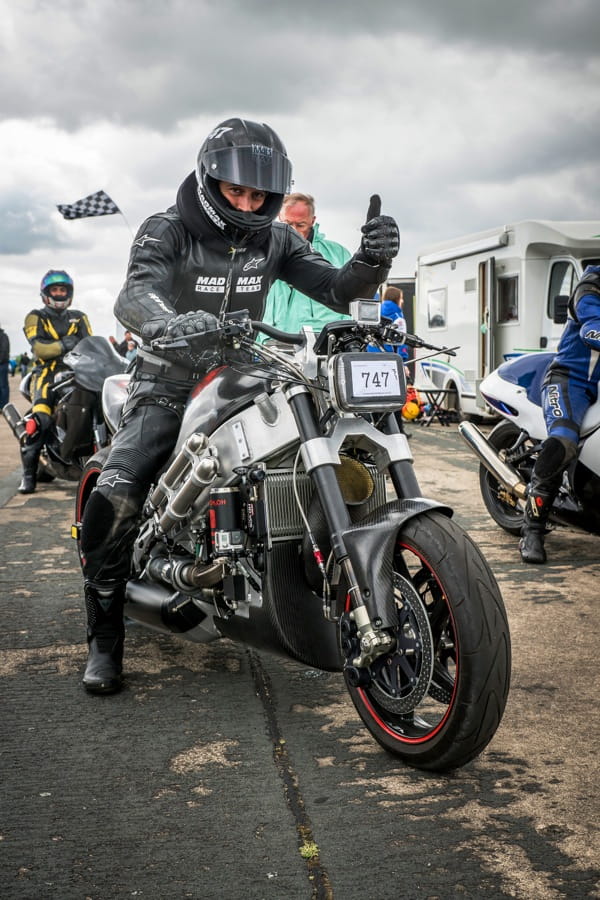 As an exercise in motorcycle engineering this is a step beyond any normal realm. Some may quaff at its relevance to everyday or even weekend riding but as a base on which to produce a chassis and components in the future which will handle great power then Eisenberg and his team have demonstrated great swathes of passion and dedication for their project alongside extreme technical know-how for themselves, Rolls-Royce, TAG Heuer and his next V8-related project. Stay tuned to Bike Social for more on that soon.

The MADMAX Turbine Bike will be riding the hill at the Goodwood Festival of Speed, 25-28 June, and will be on the TAG-Heuer stand, where Eisenberg will be also launching a very special limited edition TAG Heuer watch, the ‘Turbina LSR’. Only 10 will be available and will be sold by invitation only for £12,000.

With thanks to Spyder Club.