Of all the different types of bikes none is more ‘on trend’ or popular right now than the ‘scrambler’.

Born out of the nostalgia-fuelled fashion for all things retro, scramblers, historically, were road bikes from the 1950s and ‘60s that were adapted for the dirt to be fun all-rounders, with common mods being chopped down mudguards and bodywork, raised up exhausts and ‘bars and the addition of knobbly tyres. As such they were specials adapted for the dirt in a similar way that café racers were specials adapted for street racing.

Today’s production versions, of course, deliver all that fresh out of the box and appeal for their retro style, decent, modern performance, on/off-road versatility (although few profess to be serious off-roaders), upright ease of riding and middle-ground value – while still offering plenty of customising potential.

A typical example is Triumph’s original Scrambler introduced in 2006, which popularised the whole genre. That bike was based on the British firm’s retro, novice-friendly, 865cc Bonneville roadster twin but with upswept pipes, high trail bars, semi-knobbly tyres and more not only gave a touch of Steve McQueen/The Great Escape off-road style but set the template for all production scramblers to come.

And boy have they come. Triumph themselves have introduced two new scramblers for 2019; Ducati have a whole Scrambler family that’s just been updated, plus there’s newcomers from Norton, Moto Guzzi, Fantic and more. Here’s our current 10 of the best, in ascending price order… 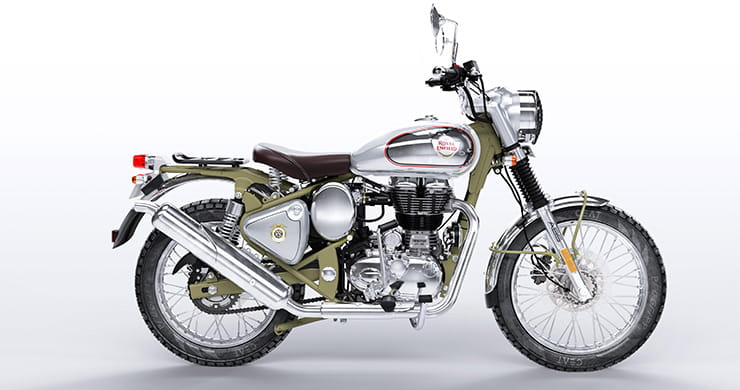 Maybe we’re pushing the strict definition of the ‘scrambler’ concept here, especially as the bike’s name uses the word ‘trials’ rather than scrambler per se, but as a new-for-2019, off-road inspired and undeniably retro machine, we have to include it here. Resurgent Indian owned Royal Enfield’s all-new 650 twins may be the firm’s biggest news for 2019, but this new limited edition version of its long-established Bullet 500cc single is a welcome addition. Inspired by the works 1949 Bullet trials bike ridden to victory in that year’s International Six Days Trial (ISDT) it shares much of the standard 27bhp Bullet’s mechanicals but with a revised subframe, raised trials ‘bars, single seat, mesh headlamp guard, semi-knobbly tyres an replica paintjob. If you want a retro off-roader it might not be the quickest or most sophisticated, but it’s definitely amongst the most authentic and affordable. 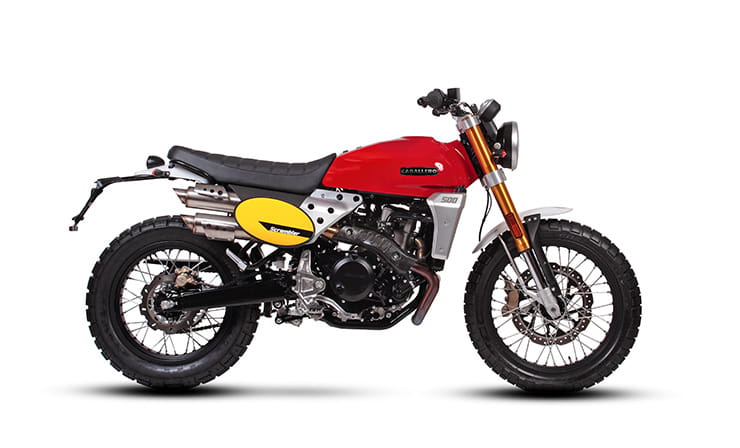 Fantic may be a revived Italian brand few have heard of and fewer still knew you could still buy – UK dealers are still fairly few and far between – but it’s new-for-2019 Caballero family of scramblers, which has been inspired by the firm’s classic 1970s trail bikes and off-roaders, is not only one of the better and purer examples of the retro scrambler breed but is also one of the best ‘feel good’ bikes of the year. Available in 125, 250 and 500cc single cylinder forms, all using liquid-cooled, Chinese-built engines, their mix of Italian style, quality components (suppliers include Brembo, Pirelli and Arrow), easy yet perky performance (the 500 version, though hardly earth-shattering delivers a fruity, useful 43bhp), plenty of neat, quality styling touches and, in the context of the other bikes here, brilliant value, all add up to, arguably, the most perfect new scrambler of all. 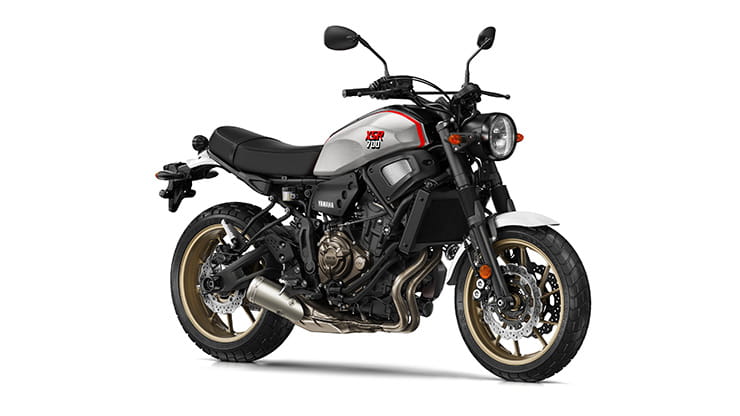 Some bikes are born as pure scramblers – Ducati’s Scrambler family, being the obvious example – while others have scrambler style thrust upon them. And the new-for-2019 XTribute version of Yamaha’s popular and stylish XSR 700 is definitely one of the latter. Inspired by Yamaha’s classic XT500 trail bike from the mid-‘70s, hence the name, the XTribute is essentially a subtle styling variation of bike (the XSR700) which itself was a restyled version of the MT-07 budget twin cylinder roadster. Unless you’re a complete purist, though, there’s nothing much wrong with that. The base 75bhp MT-07 was already brilliant and a Europe-wide best seller by virtue of great value, peppy performance and engaging handling. The XSR added to that with a retro-inspired restyle, although it’s a little budget and lack the authenticity of some. While this new XTribute version goes further still and adds more than a touch of scrambler with its XT touches, trail style bars, fork gaiters, new seat, gold rims and more although, at £700 more than the XSR, it’s questionable whether it’s actually worth it. It is, however, significantly cheaper and better performing than many of its rivals here.

The Icon was the first Scrambler model when Ducati introduced its original four-strong, 800cc Scrambler family back in 2015. As such it’s their most pure, benchmark take on the scrambler theme where other variants such as the Full Throttle (with added flat tracker style), Desert Sled (more trail style) and Sixty2 (smaller-engined, 400cc A2 version) all go off on different tangents. As such, Sixty2 apart, the Icon has always been the simplest and most affordable version, too, thanks to low, easy ergonomics, flexible and easy 75bhp performance and adequate, if a little basic, equipment. For 2019, like the Desert Sled, all have been updated. With the Icon that means a fancy new LED headlight with new LED indicators to match, updated switchgear, revised instruments including music connectivity, Bosch cornering ABS, new 10-spoke alloys from the Scrambler 1100 and a more ergonomic seat. If you like your scramblers Italian and affordable, it’s definitely worth a look.

Read our full review of the 2019 Ducati Scrambler Icon here. 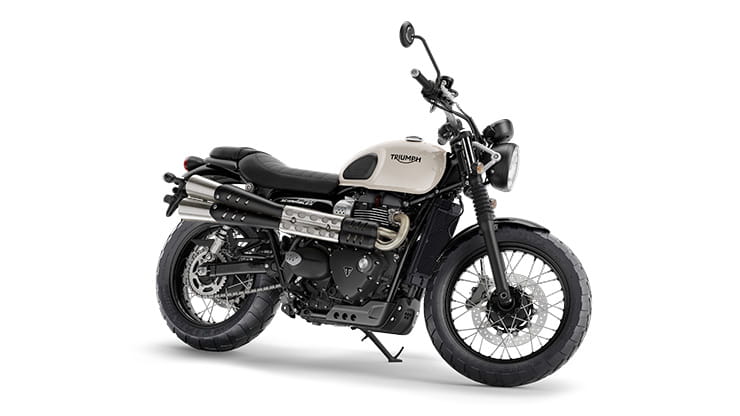 After Triumph completely overhauled its popular Bonneville retro roadster family in 2016 with 900 and 1200cc versions of its updated parallel twin, the 900 being the softer, more novice-friendly version, it brought out the first Street Scrambler in 2017. That bike was a scrambler version of the new, entry-level 54bhp 900 Street Twin with larger 19in wire front wheel, trail bars and upswept pipes but while stylish and pleasant wasn’t exactly exciting. Now, for 2019, it’s had a significant makeover with an 18% boost in power to 64bhp, new switchable riding modes (including an off-road mode), a Brembo front caliper in place of the previous Nissin, new instruments and improved detailing and style – all for just a £300 hike. The result is performance that now keeps up with most rivals without losing any of its novice appeal, great looks and specification (although much of the really good stuff are optional extras), impressive versatility and a relaxing, evocative ride.

Read our full review of the 2019 Triumph Street Scrambler here. 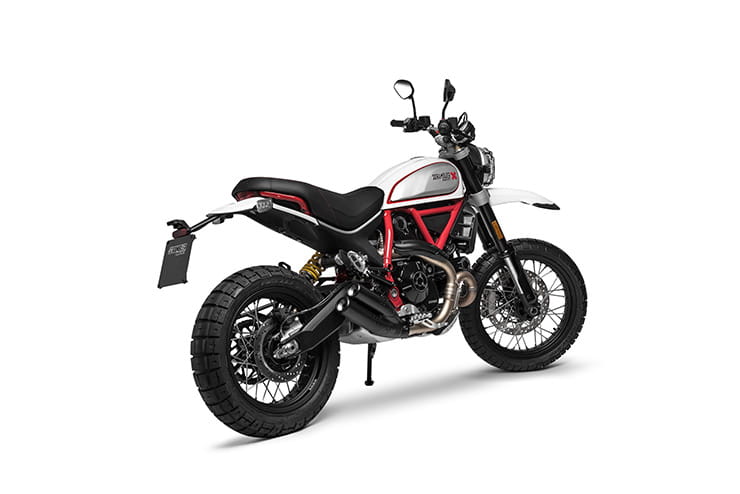 When Ducati introduced not just a bike but a whole scrambler family in 2015, as inspired by Ducati’s original 1960s single-cylinder Scrambler, it proved a big hit with biking first-timers looking for a stylish, affordable Italian V-twin. But although delivering a useful 75bhp and decent handling it wasn’t until the arrival of the Desert Sled version in 2017 which, with its taller, trail bike styling including chunkier, longer-travel, fully-adjustable suspension, extended swingarm and bigger, off-road wire wheels, that it became a credible off-roader and a serious option for more experienced riders. For 2019 it’s better yet thanks to a first major update which includes: stylish new red-finished frame; LED lights; an extra off-road riding mode; new switchgear and revised clocks, a new seat and even knobblier Pirelli Scorpion Rally ST tyres. The old Sled was already arguably the most stylish and capable of Ducati’s Scramblers, especially for more experienced riders, now it’s better still. 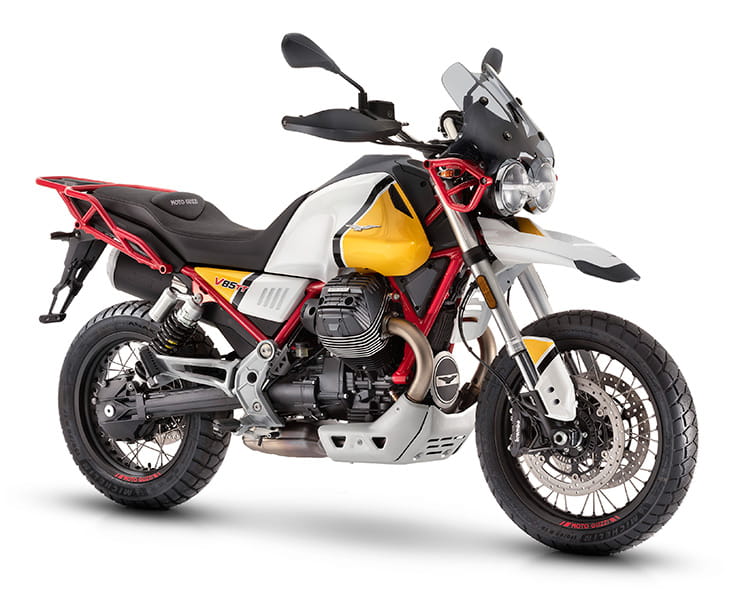 Arguably more ‘retro adventure’ than true scrambler, but Moto Guzzi’s main newcomer for 2019 tocks so many of the same boxes it’s surely worth including here. At its heart is a reworked version of Guzzi’s signature 90-degree transverse V-twin from its V9 range producing 79bhp. Grunty, flexible and, thanks to shaft drive, relatively maintenance free, its mated to a lazy, comfortable and reasonably competent – if not exactly sharp – chassis, then sprinkled with a mix of retro scrambler styling touches and modern adventure luxuries such as a colour TFT screen, Bluetooth connectivity, big 23-litre touring tank plus big screen, crash protection and plenty of luggage options. Hardcore scrambler ‘fashionistas’ main turn their noses up but the V85TT has plenty of classic dirt style yet is a versatile and comfortable all-rounder, too. 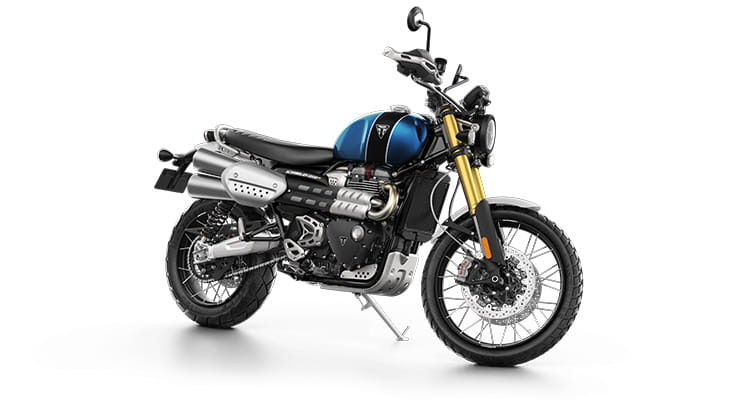 If you thought all scramblers were soft and ‘more show than go’ off-road – think again. Triumph’s all-new for 2019 Scrambler 1200 takes the scrambler style and, thanks to full-bore, 90bhp 1200 Thruxton power plus a genuinely capable off-road chassis including big wheels and quality suspension, turns it into a genuinely potent performer, both off-road and on. As with the Hinckley marque’s Tiger adventure bikes, two versions are available: the more road-orientated, affordable XC, although it’s still more capable off-road than many scramblers, and the full-monty XE which has beefier, longer-travel suspension, more sophisticated electronics including an ‘Off-road Pro’ mode, wider bars and more. The end result, it has to be said, remains a little odd. What other bike, after all, combines a small-ish 16-litre tank, retro ‘Monza’ filler cap, Brembo M50 radial brakes and 90bhp, but it’s also a unique thrill as well. 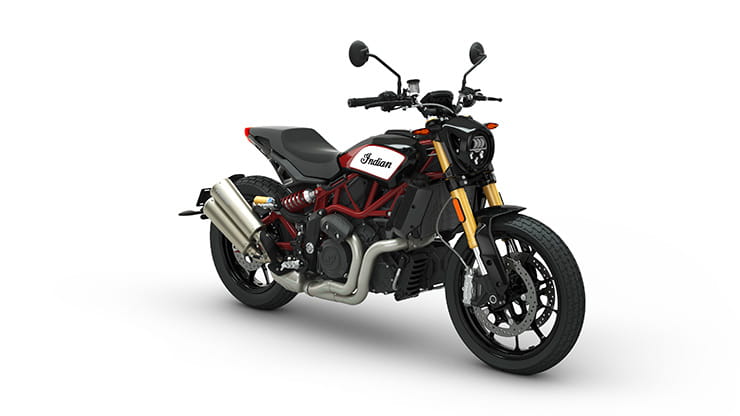 Upstart US firm Indian, owned by Polaris since 2011 and completely reinvigorated to rival Harley since its first all-new ‘big twins’ in 2014, then supplemented by its smaller 1200cc Scout family the following year, is going places. And with 2019’s all-new FTR1200 it’s come up with one of the surprise best bikes of the year. Being American, the FTR is more flat-tracker than scrambler, but the experience is so similar we’re not splitting hairs. Based on the 100bhp Scout 1133cc V-twin it’s been tuned to 120bhp by Polaris-owned Swissauto, put in an all-new, Ducati-alike tubular steel frame with proper Brembo brakes and adjustable sports suspension and sprinkled with riding modes and attitude. The result is a Monster-rivalling backroads hoot with masses of grunt, ultra-sweet steering and more comfort and versatility than you’d expect. And, if you want more, there’s also an S version with slick colour TFT screen and matching switchgear, three switchable rider modes and uprated cosmetics. 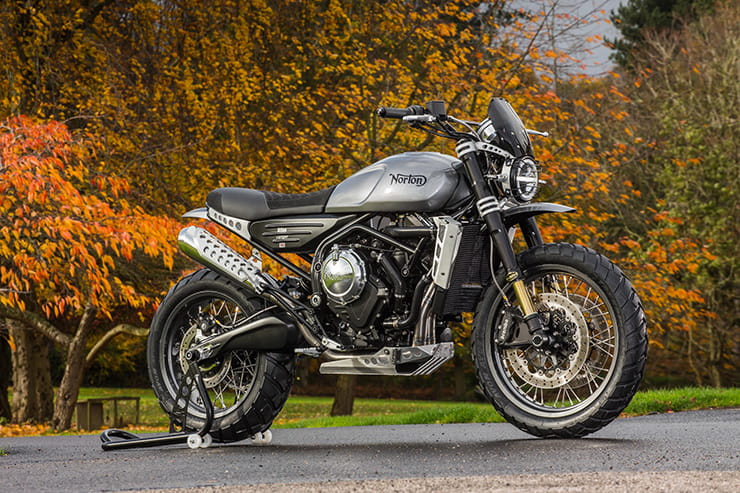 So new customer deliveries are still, as we write, yet to begin, but the scrambler version of Norton’s all new 650 Atlas twins – the other is the more street-targetted Nomad – is still so eagerly-anticipated it’d be criminal to exclude it from this list. Both are based around an all-new, liquid-cooled, 649cc parallel twin that shares much of its architecture with Norton’s 1200cc V4 superbike. The frame is a tubular steel trellis, wheels are wires with alloy rims and the Brembo brakes and ‘Roadholder’ suspension should be decent, too. The Ranger, meanwhile, gets the full-on scrambler treatment with a larger 19in front wheel, wider, braced bars, small screen, bash plate, raised front mudguard and semi-knobbly Avon tyres.

Check out our exclusive first look and interview with Norton owner, Stuart Garner, at the official unveiling, right here.