Of all the categories of different motorcycles available none is more misunderstood than that of the ‘touring’ bike.

But while the old adage that ‘you can tour on any type of machine’ is undoubtedly true it’s also undeniable that bikes which prioritize long distance comfort, effortless mile-eating ability and have some provision for luggage and pillion carrying require fewer compromises and sacrifices from their riders and potentially make for a more comfortable, enjoyable holiday experience.

It’s also true that many modern touring bikes have come a long way from the wobbly, overweight leviathans of yore. The days of tall, overladen tourers yawing and weaving through the bends are long gone while even the latest ‘full-dressers’, such as Honda’s latest Goldwing and Harley’s new Glides, although still cumbersome, now handle well enough to surprise many a sportsbike owners.

And it’s also true that, after a few years of neglect by the major manufacturers, there’s now a wider choice of fully kitted touring machines, either in standard trim or by optioning touring luggage accessory ‘packs’ than ever before.

But which is the best? Ultimately, that depends on your specific needs and budget. But to help you choose, here’s BikeSocial’s current pick of 10 of the best, in price ascending order… 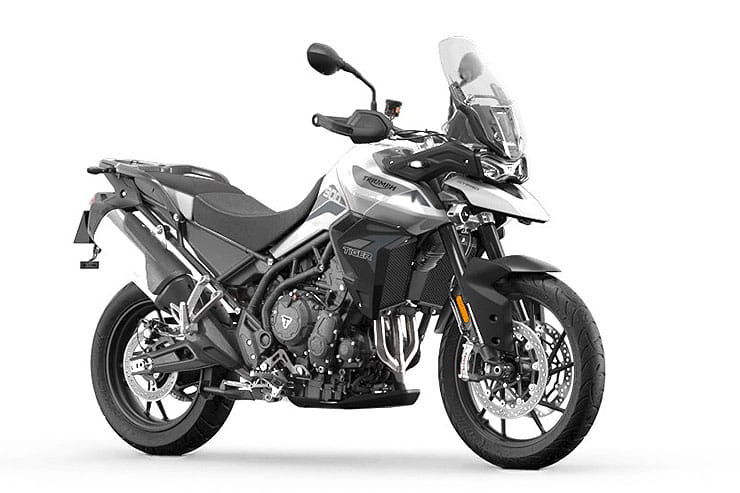 Triumph’s already brilliant Tiger 800 triple received a total makeover for 2020 elevating an adventure-style machine, which was already a great road all-rounder, especially in XR trim, into a brilliant one. And if you get it in the new, road-orientated GT trim with slick TFT dash and cruise and the Pro’s electrically adjustable suspension with quick shifter and add some Triumph luggage, it’s probably the best 900cc tourer out there, too. Elsewhere, the 900 got a boosted, enlarged version of the classy, characterful Hinckley triple, revised chassis including new Brembo brakes, smarter bodywork with adjustable screen and big 20-litre tank, plus more comfortable ergonomics and LED lights. Not cheap in top spec form (the base 900 GT is £11,400) but enough to make you wonder why anyone needs anything bigger. 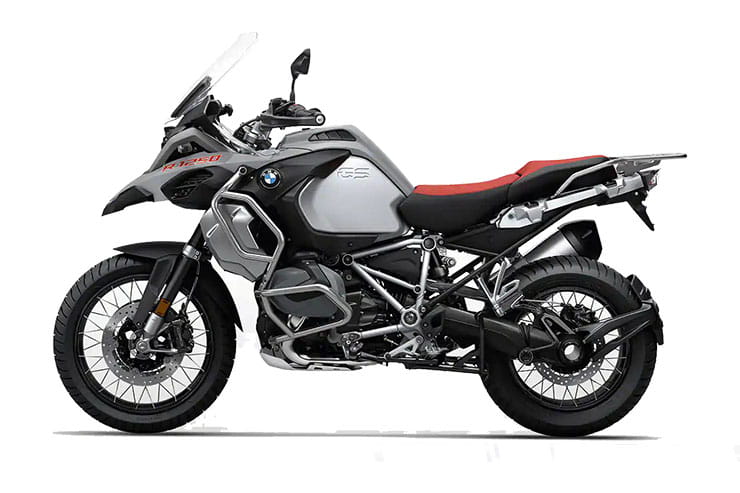 You might expect a company with such a strong touring tradition as BMW to have more than one credible offering in the sector and they’ve certainly delivered just that. So, in addition to the sports-tourer RS and pure touring RT, BMW’s class-leading, boxer-powered adventure, the R1250GSA, which has more touring ability than many pure tourers, is more than worth a mention here. While the standard R1250GS is already a good enough all-rounder to remain a British best-seller, the adventure version with its extra distance appeal thanks to its larger fairing and fuel tank, not to mention more off-road ability, too, gives those who prefer the adventure bike style a virtually peerless touring machine into the bargain. Yes, it’s tall, thanks to that overlong suspension – and something of a handful at low speed, too, especially when fully laden. But the same, flexible ‘ShiftCam’ boxer and shaft drive, impressive road manners and comfort, great long-distance ability (try 300-miles+ to a tankful) and more luggage options than you can shake a very large stick at, it’s also, still, one of the best touring machines you can buy – especially if you want to venture off the beaten track once in a while. 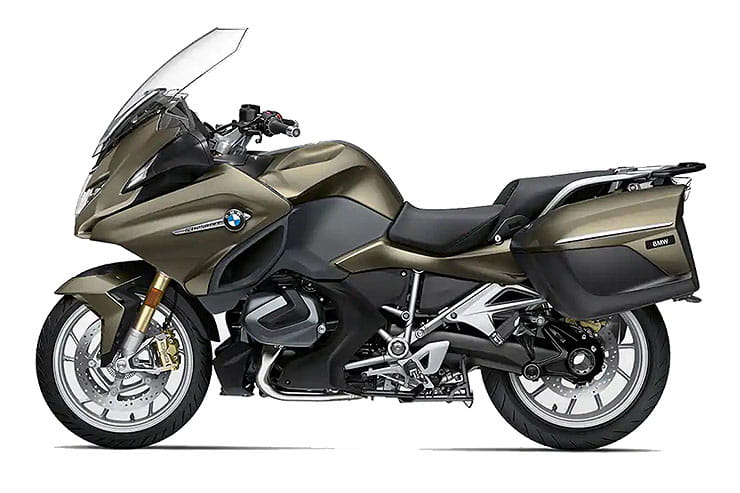 If the revived RS model has returned BMW to the top of the sports-tourer class (see elsewhere) it’s sister bike, the similarly boxer-powered RT has never been away when it comes to full-blown tourers. Since first being introduced in the late 1970s, the RT has maintained the German marque’s peerless touring tradition, defined by their cossetting tall screen fairings, sumptuous comfort, quality luggage options and durable build including shaft drive, and the latest 1250 ‘ShiftCam’ boxer RT, introduced last year, easily maintains its dominance. Although only the engine differs from the latest R1200RT, which came in in 2014, that bike, with its monster fairing, lavish comfort and equipment and yet easy manner and decent handling, was so far ahead of the rest extra power was all it needed. For all day comfort and class for two, without the imposing bulk and weight of a multi-cylinder full-dresser such as BMW’s own K1600 or Honda’s GoldWing, nothing comes close. And, as with all BMs, if you tick all the options boxes or go for the top-of-the-range models, complete with heated seats and grips, electronic suspension and quality luggage, you’ll quite literally be wanting for nothing. 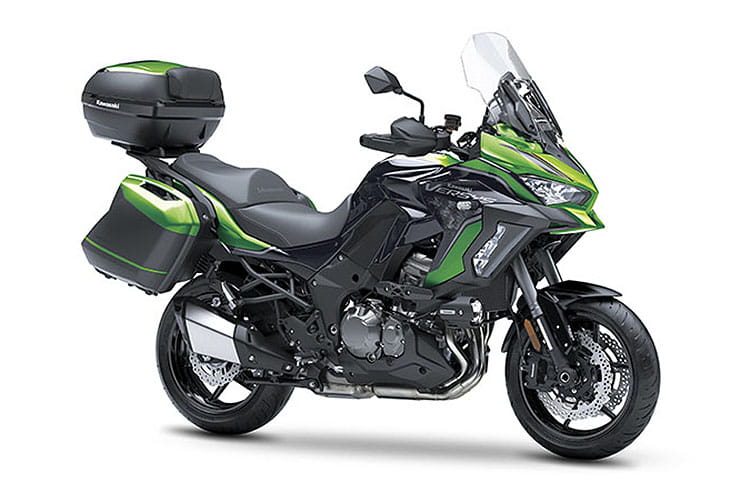 Kawasaki’s initially ugly duckling Versys 1000 may have been one of the most unusual adventure bikes when the four-cylinder, Z1000SX-based machine debuted way back in 2012 but it’s since evolved into a star tourer. That first bike may have had zero off-road ability but its grunty, detuned 116bhp performance, roomy upright comfort and sub-£10K price singled it out as a bargain tourer. In 2015 it gained a welcome facelift to match its 650cc little brother plus a host of spec updates while in 2019 it was improved again and gained a higher spec ‘SE’ variant complete with semi-active suspension and colour TFT dash. For 2021 it has also been revised again to comply with Euro5. The result may no longer be the bargain it once was and now has even fewer aspirations to be any sort of adventure bike. But as a well-equipped, comfortable, smooth tourer the big Kawasaki has a lot going for it while Kawasaki’s own accessory packs enhance it further still. The Grand Tourer pack includes 56-litre panniers and 47-litre top box, all with inner bags, LED fog lights, gel tank pad, frame protectors and sat-nav mount and is about as well-equipped a tourer as you can get for £16K. 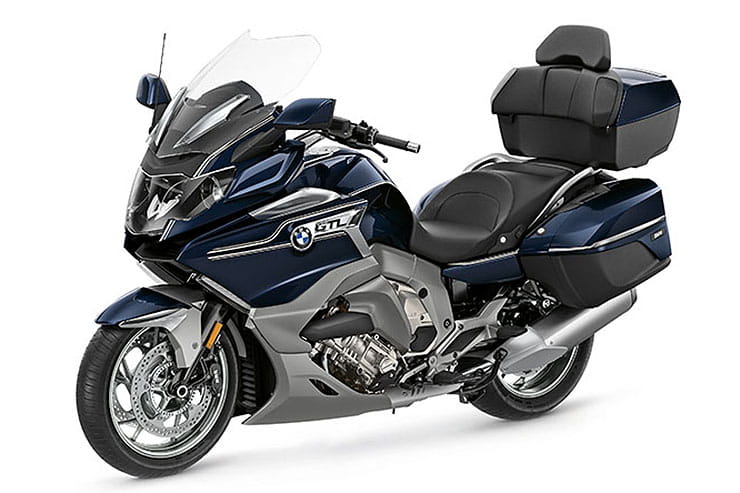 Kawasaki’s Versys SE Grand Tourer may now come with virtually everything, but if your budget can stretch to £20K+ you’re really entering ‘full-dress tourer’ territory. BMW’s ‘no-holds barred’ take on the theme was launched in 2011 and was a massive step up from what had previously been available. Its astonishing six-cylinder engine produced a whistlingly-fast 160bhp; its chassis was equally able even though the whole bike seemed to be the size of a house and its equipment, comfort and luggage capacity, including things like heated seats, central locking, fancy stereos and electric screen, was second to none. Since then, the GTL’s started to seem a little dated, but it has received some useful updates and its magic carpet ride and sheer supersonic ability has to be experienced to be believed. 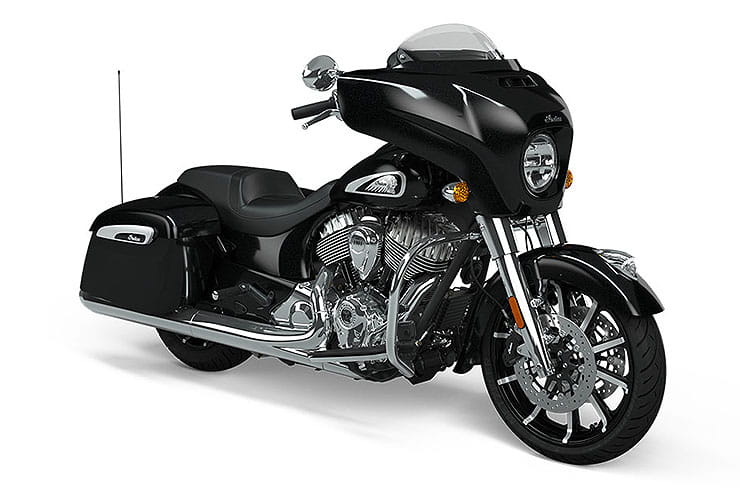 Baggers are a very particular, American take on the whole ‘tourer’ theme but their popularity globally has become such they shouldn’t be ignored on this side of ‘the pond’. Basically chopped down full-dressers designed to have most of the practicality and comfort of the donor bike but with some of the style of a chopper, the first production version was Harley’s Street Glide in 2006, a bike which was essentially a chopped down ElectraGlide and a model which has been so successful it remains one of the biggest sellers in its range. Revived Harley rivals Indian came up with its own version, the Chieftain, in 2014 and the Limited is its latest version. It’s powered by an even bigger V-twin than the Harley pushing out 100bhp it’s beautifully built, feature retro Indian touches such as the flared front ‘fender’ and ‘war bonnet’ light, has a plush, comfortable ride and reeks quality and class. Whether it’s actually better than the Harley is a moot point, but it’s definitely a quality, different alternative. 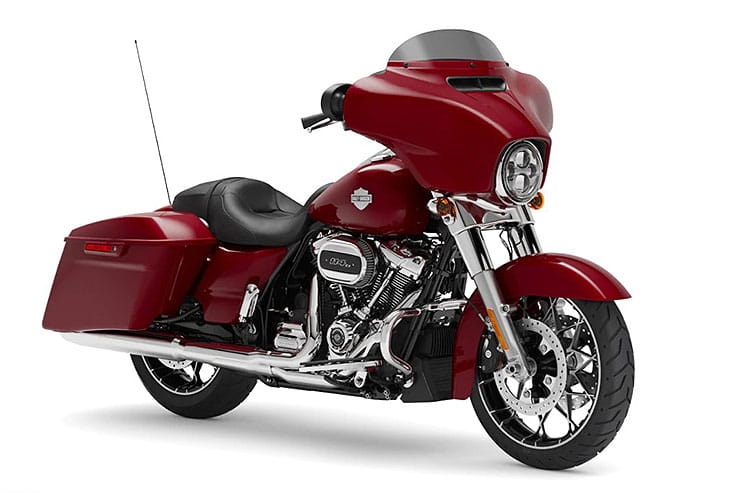 If the Indian Chieftain is the upstart, less commonplace rival to the definitive ‘bagger, Harley’s Street Glide, then the latest Street Glide Special is the latest and greatest example of that original – and if you like your touring bike bagger shaped is probably irresistible. Harleys have moved on a lot since that original 2006 Street Glide in 2006 and this latest Special is no exception. Now powered by a bigger, more powerful ‘Milwaukee Eight’ 114 cubic inch (1868cc) V-twin it produces a healthy 89bhp, brakes are now four-piston Brembos, there’s a slick ‘Infotainment’ touch screen system and quality and style, partly due to its new ‘Prodigy’ wheels, is better than ever. If you want to go far in comfort AND style few bikes do it better than the Street Glide. 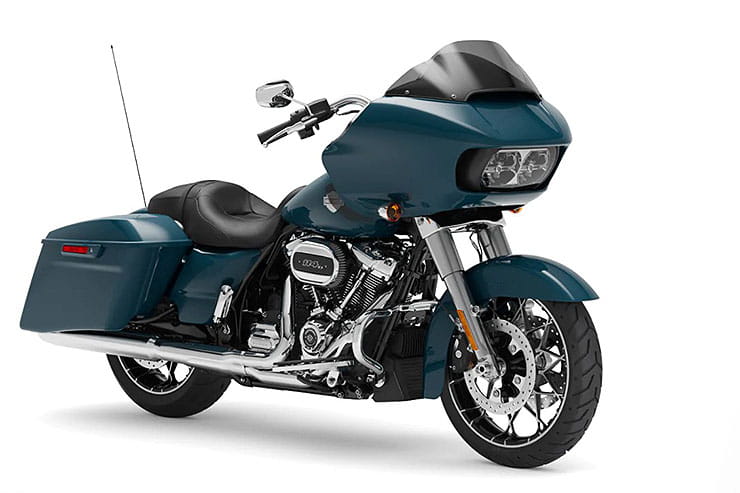 And who also said giant US retro specialist Harley didn’t do new bikes? The Milwaukee-based firm’s latest tourer is this, arguably its grandest tourer yet. Less celebrated than the iconic ElectraGlide, the RoadGlide shares all the basics of that bike, namely retro ‘full dresser’, three box touring style and latest 114 cubic inch ‘Milwaukee Eight’ V-twin, but with a bigger, frame-mounted fairing instead of the Electra’s iconic forks-mounted ‘Batwing’. As such it offers, arguably, even more touring weather protection and comfort and with lighter steering, too. But this latest ‘Limited’ version goes even further with Harley’s latest ‘Boombox’ infotainment system, larger front wheel and mini ape-hanger bars, uprated Brembo brakes, heated grips and new paint finishes. The result is Harley’s most lavish, best performing but also most sophisticated touring machine yet. Don’t be swayed by those old school looks, the latest RoadGlide tourer has as much sophistication and comfort as any, but still with the characterful American V-twin rumble that sets it apart. 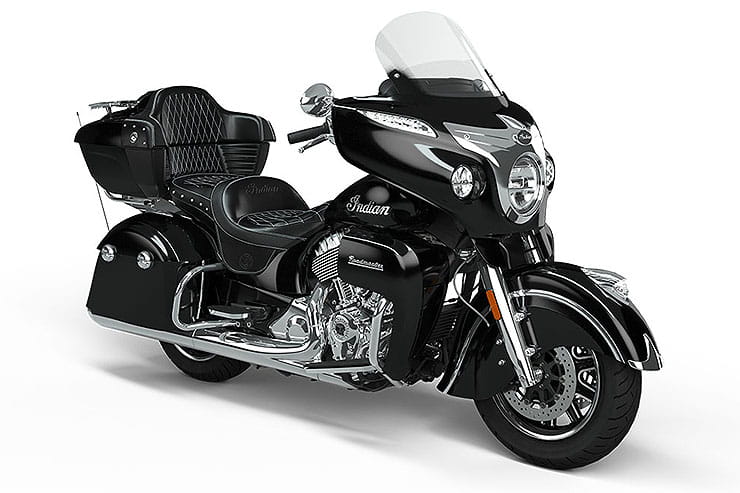 Anything Harley can do, Indian can do better… well, that’s what H-D’s American rivals would have you believe. Thing is, when it comes to full-dress tourers, they’re probably right. Indian’s range-topper is the full-dress Roadmaster – and it’s bigger and, arguably, better than Harley’s ElectraGlide in virtually every way, and more expensive, too. Hugely flamboyant, lavishly equipped and a decent performer, the Roadmaster is also a mountain of a motorcycle. At its heart is Indian’s massive 1811cc ‘Thunderstroke’ V-twin which pushes out an impressive 100bhp (10 more than the Hsrley). It’s proportions are all-round larger, too, yet it still handles impressively. There’s simply masses of luggage space, sumptuous leather seats, an electric screen, vast infotainment system, two tone paint, lashings of chrome, in fact, pretty much everything you can think of. Yes it’s expensive, ungainly, unsophisticated and somewhat garish, too. But motorcycle tourers don’t come with much ‘more’ than this… 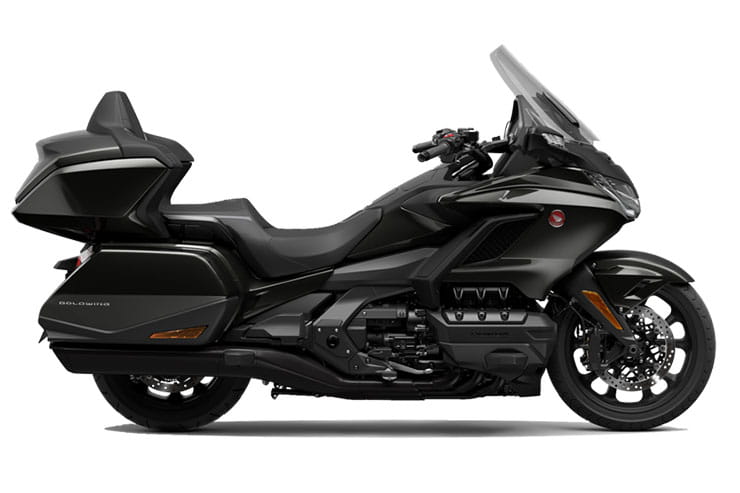 An update to the old 1800 Gold Wing, which first came out in 2001, had been a long time coming but when it arrived in 2018 it proved it was more than worth the wait. Although the characteristic ‘flat six’ engine layout remained, the creamy smooth motor and everything else was all new. Performance was boosted from 116 to 125bhp (although the Wing is more about creamy, effortless torque) and now came with the option of Honda’s brilliant, semi-automatic ‘DCT’ transmission. The chassis, featuring a twin spar aluminium frame with novel ‘Hossack-style’ front end in place of forks, was all-new, too, helped reduce weight considerably and delivers size-defying handling. While, best of all, the level of luxury, sophistication and pampered comfort takes full-dress tourers up another level entirely. The large screen is now fully adjustable; there’s electronics and rider modes aplenty, a dash that wouldn’t look out of place in a luxury limo, masses of luggage space, armchair-like comfort – you name it, the new Wing has got it. Sure, it’s not cheap either (a more basic, top box-less version is available for around £23K), but when you’re talking about the touring bike with the most, who’s counting?