How it works: Fuel Injectors 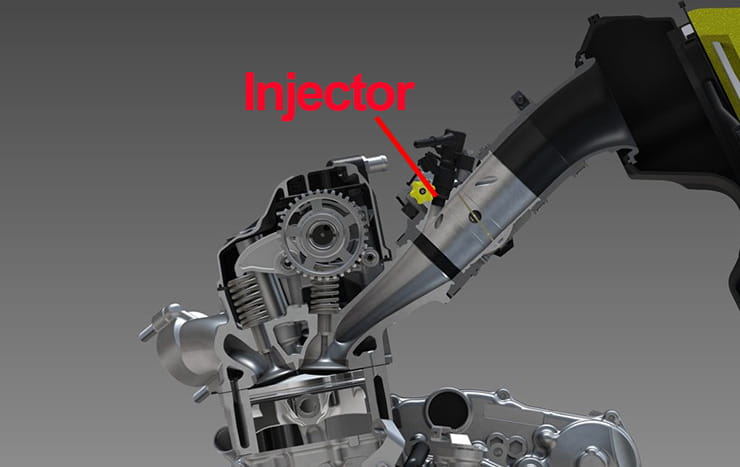 This cross section shows a typical position for an injector (in this case on a Honda CRF450). You can see the throttle butterfly further upstream

It’s very simple: spray the right amount of fuel into the air which is heading into the combustion chamber. Essentially, fuel injectors are basic pieces of kit – a nozzle with a valve that can be opened and closed very precisely.

Correct. The difficult bit is working out how much fuel to squirt, because there are so many variations in circumstances, and getting it exactly right is essential with bikes - far more so than with cars.

Because bikes are light (and therefore responsive), very powerful relative to their weight, and inherently unstable (ie, they can fall over). So get the fuelling wrong and the bike might hesitate then lurch forward half way round a slippery corner, potentially causing a crash. Make the same error with a car system and the driver probably wouldn’t even notice.

Why is getting it right so difficult?

Because the combustion chamber is fussy – it requires a mix of 14.7 parts air, to 1 part fuel for perfect combustion, and if you stray too far from that there will be problems. Too much fuel (called ‘running rich’) will hit your mpg, make the bike feel sluggish and create fumes. Too little fuel (running lean) and will also cause you to lose power, but also make the engine run hot, which ultimately could melt a piston. It’s a tricky one, because it’s safer to run a bit rich (and most bikes do), but all the emissions regulations are forcing manufacturers to run as lean as possible. Then you have to add in the all the variables – a different amount of fuel will be needed if the engine is hot or cold, or if you’re at sea level or up an Alp (thinner air, so less fuel needed), or if you’re accelerating or decelerating… 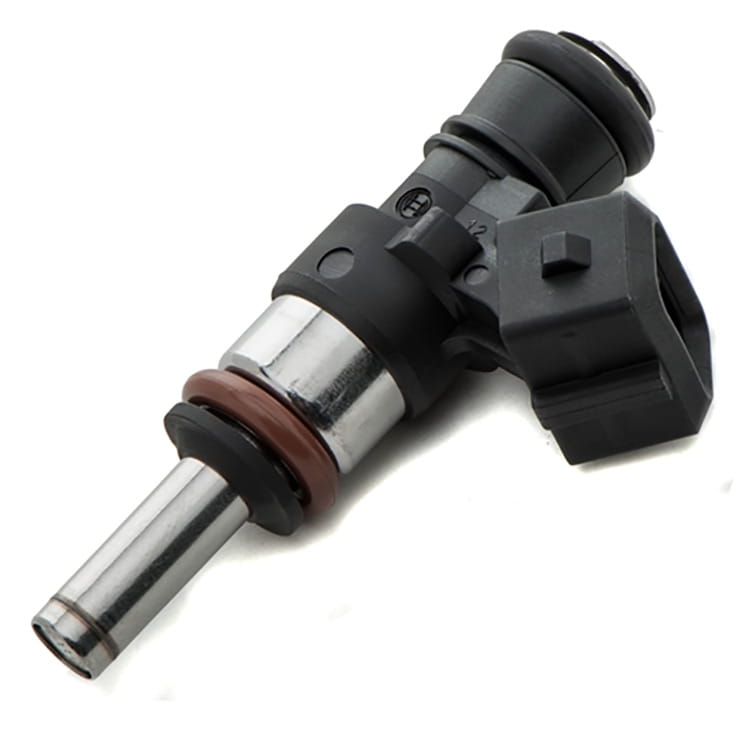 A Bosch injector from an R-series BMW. The offset block at the top is where the electronic connector plugs in

How is that all worked out?

The calculations are done by a computer called an ECU (electronic control unit), a black box not much bigger than a pack of fags that often lives under one of the seats. It receives information from sensors around the bike and decides on the amount of fuel.

What sort of sensors?

Crank position, throttle position, atmospheric pressure, intake air pressure, air temperature, engine (or coolant) temperature and lean angle if you’ve got an IMU (inertial measurement unit). Stored in the ECU are tables (called a map) with thousands of combinations of those variables and the correct fuel amount, all input by the engineers. So, for example, if the crank is at 180 degrees, the throttle is at 25%, atmospheric pressure is 1020mb, intake pressure is 900mb, air temperature is 15C, engine temperature is 76C and lean angle is 10 degrees, the ECU finds that combination and looks up how much fuel the engineers said should be squirted in. Then it does it. 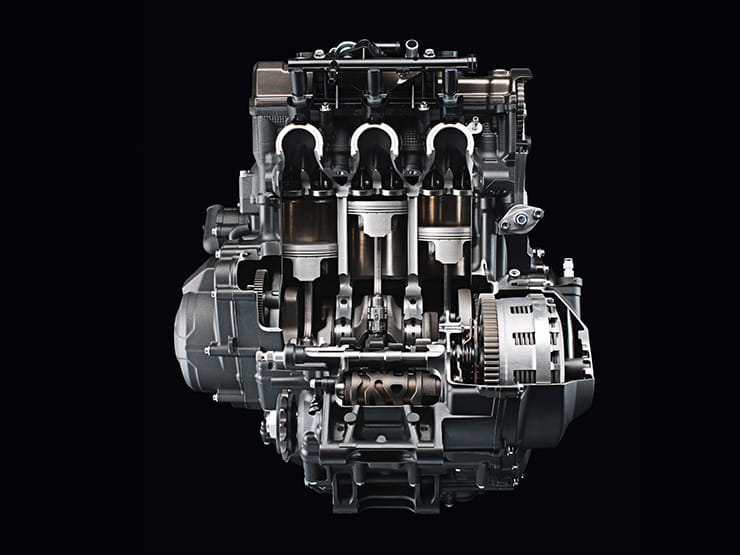 That’s some set of tables…

Well, yes, in reality not every possible combination is listed, so the ECU finds the one above the number it’s got and the one below and halves the difference. But you get the picture of how complicated it is to get every set of conditions right…

Indeed. So this is why early fuel injected bikes often felt jerkier than the models they replaced?

Yes, they had less powerful ECUs, fewer sensors to work out what was going on, and the engineers were often trying to adapt car technology. Nowadays any problems with throttle feel are usually due to emissions regs forcing engineers to apply settings they’d rather not. Hence how many KTMs, for example, have been remapped by specialist experts.

So are fuel injectors better than carbs?