How Royal Enfield built its own custom bike 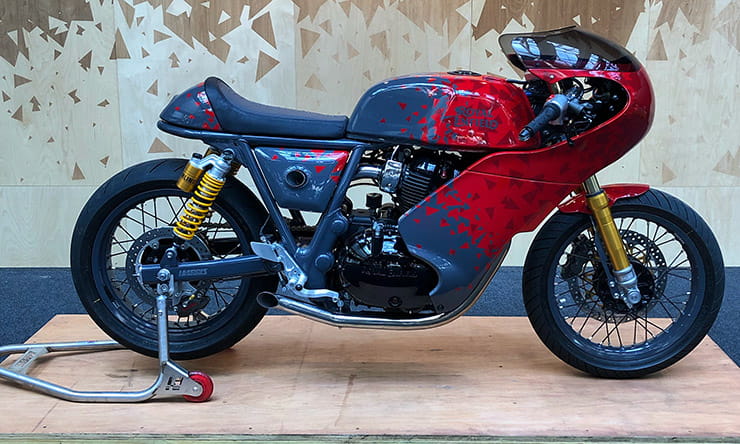 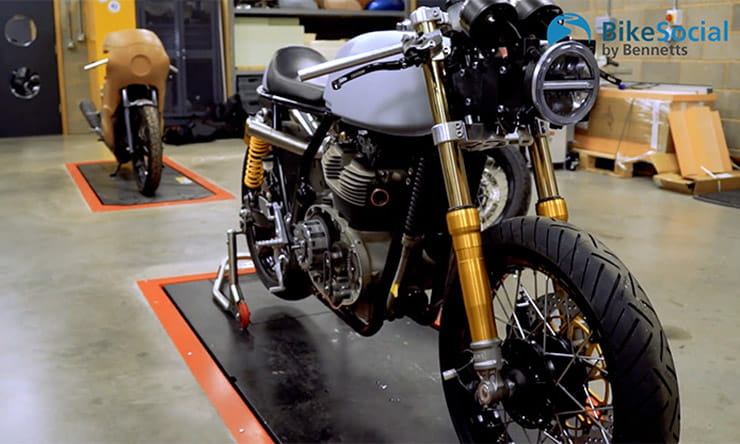 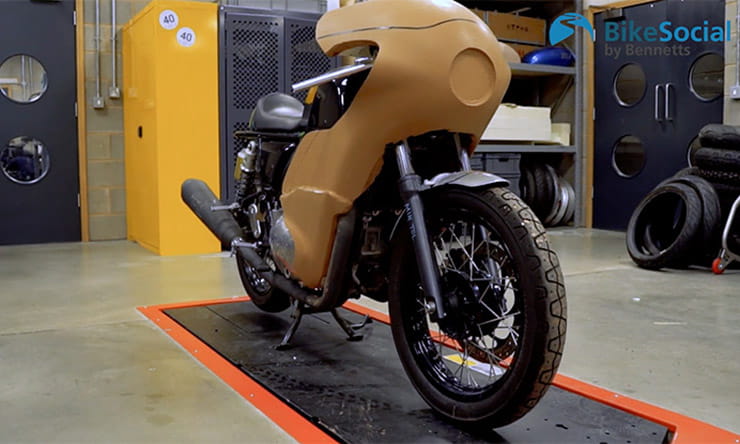 “We try to approach all of our builds with a bit of humour, motorcycling’s about having fun,” says a beaming Adrian Sellers, Group Manager (Industrial Design), Royal Enfield. Beaming because I’ve just asked how proud he is about the motorcycle sitting in front of us having just been unveiled at The Bike Shed London Show back in May 2019.

“Lester Harris loves his tea,” adds Sellers, talking about the name of the bike. But it’s been more than just a labour of love for the team involved in the project. “We want to show what we can do with our 650GT without having to conform with homologation and emission regulations, that customers can take it to another level”

Siddhartha Lal, MD of Royal Enfield owners, Eicher Motors, says of the brand which has been under his stewardship since 2000, “it’s a company with British roots, Indian soul and global reach.” He’s not wrong, the company has gone from producing 50,000 motorbikes in 2010, to 890,000 in 2018, that’s some growth primarily courtesy of parent company investment, larger production facilities and of course growing desire for the marque’s motorbikes the world over, especially across Asia.

The brand has been re-born and during that time the Technology Centre was opened in 2017 and is now the working home for 148 employees, a core of whom were pulled together to work on the Nought Tea GT project, lead by Sellers who, when we first visited the project HQ back in April 2019, said, “It’s nice to step back from a usual 3-year lead time and working on things that we can’t show to people for a long time.”

This is the story of how the project came together from concept and first clay models to Harris Performance’s input, testing and the model unveil.

Lester Harris said: “Our function with Royal Enfield these days is to work with the design engineers, the styling guys and the test team and help them develop a better motorcycle. We’ve been involved in racing for 40 years developing bikes, suspension and chassis and we looked at every little feature of this bike to improve it a little bit from the tyres, wheels, forks and we even made our own adjustable triple clamps which allow you to move the forks backwards and forewords allowing you to adjust the trail where the bike either turns easily or is stable and we’ve been trying to find a balance. Unless you’ve actually done this (customising a bike) you can’t appreciate how much work goes into it!”

When on the workbench at Harris Performance, the original Continental 650 GT had its front forks, calliper, brakes and triple clamps replaced with the likes of Ohlins and Brembo components, as well as new rims laced on to the hubs and different tyres. The team then had to calculate the dimensions for the fork yokes which are adjustable for off-set and enabled the team to go testing and, if required, change the steering characteristics by changing the inserts that fit into the top and bottom yoke.

Directly underneath the seat unit are the eye-catching inlet tubes going onto the throttle bodies. The team removed the stock pipes and gave them a new radius, bend angle and even a typically custom-style slash cut exit. The ergonomics of the bike were altered too with different handlebars so the crew could fine tune the riding position as well as new foot plates that are further back than the standard bike, with three positions for the pegs. The seat was amended and the sub-frame cut to match the shape of the seat. Finally, they laced a wider rim onto the stock hub allowing for to run a bigger tyre and also CNC machined a component to change the wheel adjusting mechanism, with a new axle.

“It’s what we do. Taking a stock bike, analysing the bike and looking at areas to improve it,” said Harris. 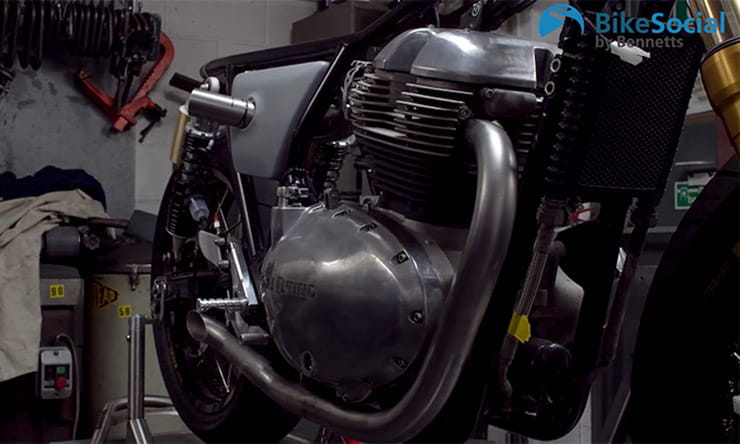 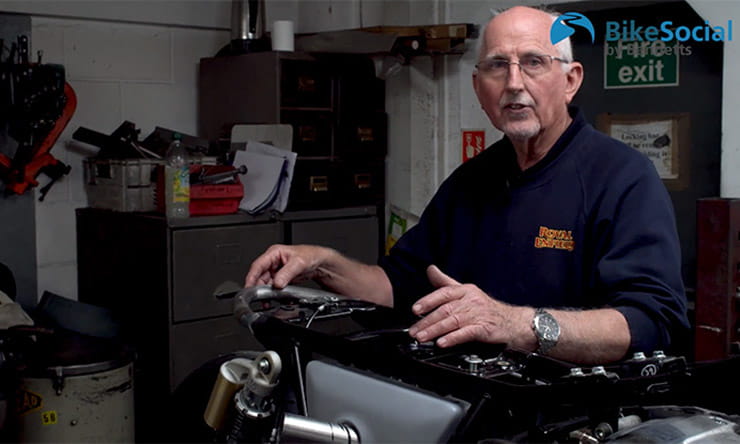 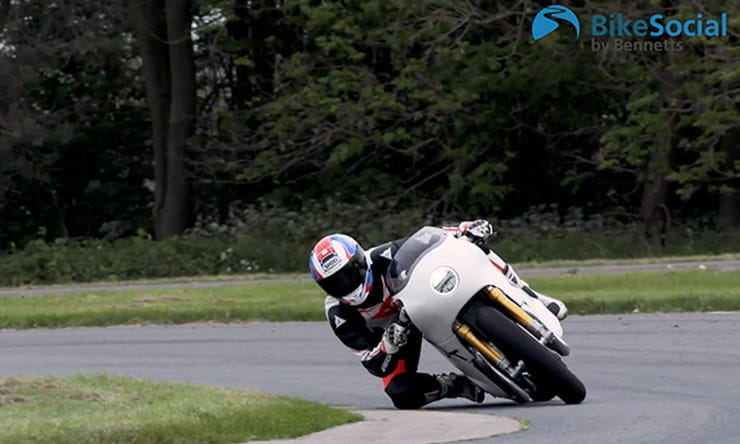 Above: the project bike at Harris Performance with Lester Harris casting his eye over it while Curtis Wright tests the machine

After the first run at the Bruntingthorpe Proving Ground, on the doorstep of the project HQ, Curtis Wright, Royal Enfield Product Manager by day and official Nought Tea GT test rider…er, later that same day, said, “The very first shake-down went really well, it’s really stable but we can still improve the balance and how flickable it can be. The brakes are sublime and the bike is a lot lighter which makes it a great little toy.”

At the project’s official unveil at The Bike Shed London Show, Sellers said, “It’s been nipped, tucked, tweaked and run around and now we have something that takes what we started with to the next level.”

“For version two will allow us to go racing with it, we’ll be a little bit more restrained in some areas with more of a focus on performance. When you look at them next to each other there’ll be a strong relationship but with different purposes. We have already discovered from other projects that the engine is very flexible. We can really get a lot more power out of it, it’s got a lot of metal and there’s a very well designed crankcase that allows us to add power without having to modify too much. So, we’ll have a play with it and find the right balance of power for the chassis then see how we go on the race track with it!”

And it’s Wright who’ll be racing a more performance oriented version of the Nought Tea GT at The Bike Shed Festival at Lyddon Hill in October.

Sellers added, “For that person who wants the pure cafe racer experience we now have a bike that we could offer our customers but that depends on the kind of response we get from this.”

If this floats your boat then make yourself heard but in the meantime, Royal Enfield should be congratulated for allowing its finest brains to create something so interesting and unconforming with one eye on future development. 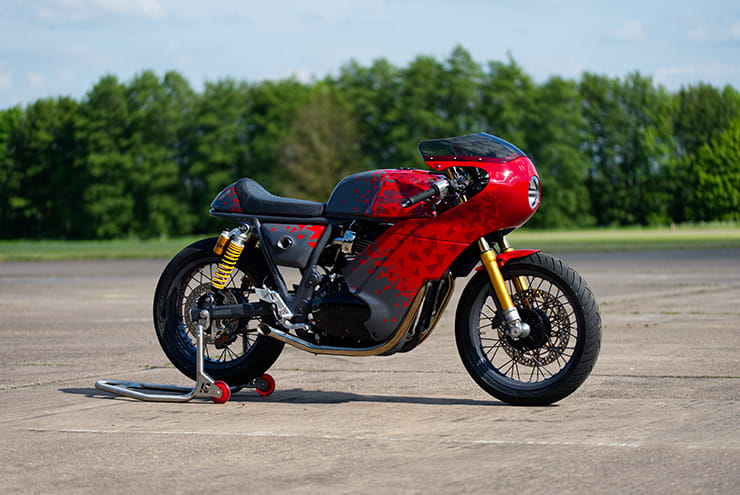 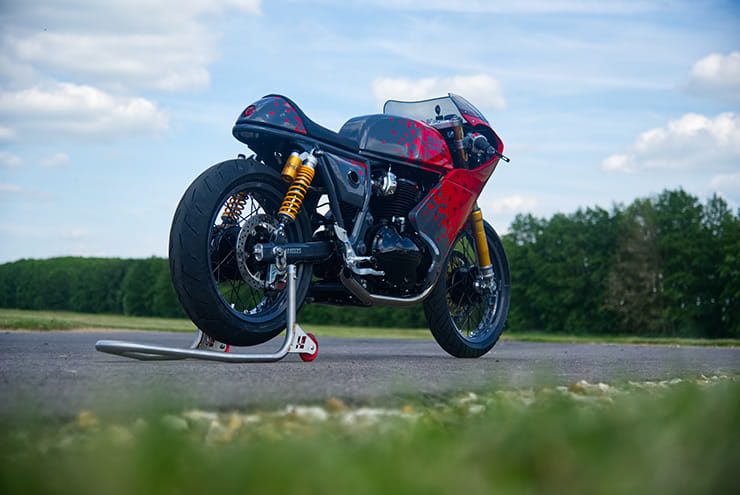 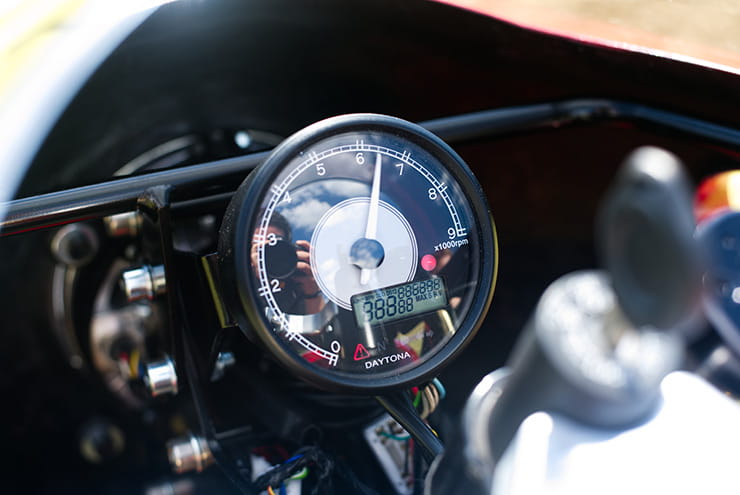 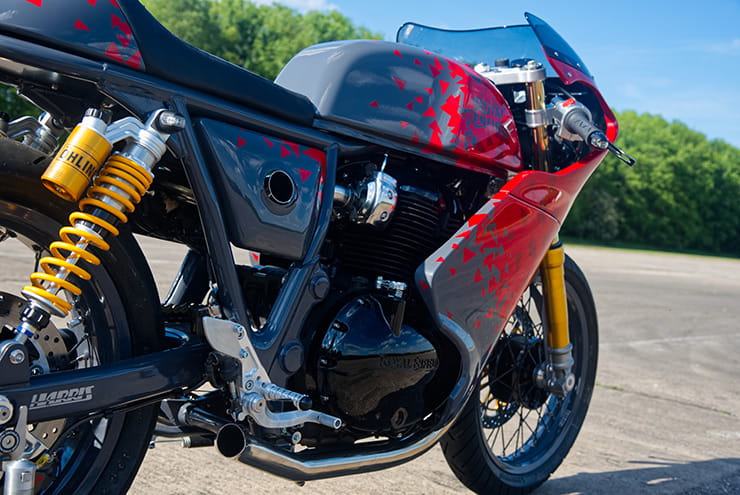 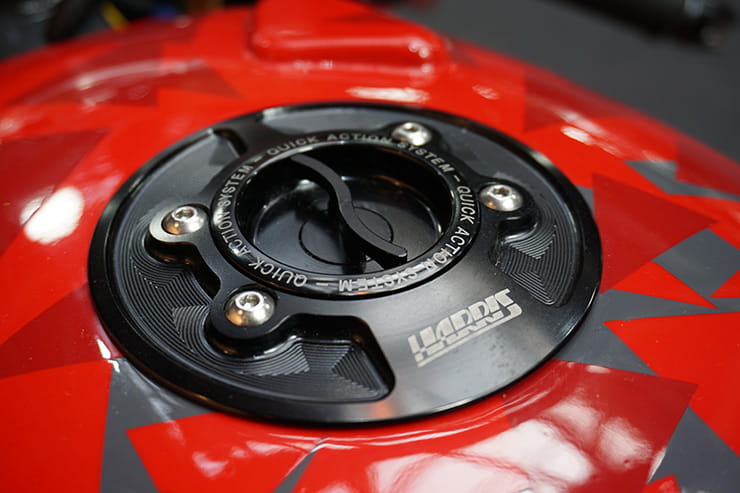