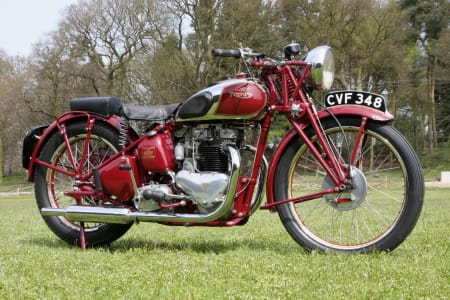 Ironically, it was also the poisoned pill for Triumph and the rest of the British bike industry. The Speedtwin’s creator, Edward Turner, enjoyed so much success with his bike, and its later siblings, that he was allowed to run Triumph in an utterly autocratic, not to say narcissistic, manner. This was bad management practice and, later, Triumph were to pay a terrible price.

The Speedtwin also inculcated the idea in British manufacturers that if you were smart, or what appeared to be smart, you could avoid investment on R&D and new models. This mind set too, was to cost the British dear in the 1960s.

Conceptually, the Speedtwin was quintessentially Japanese in that it was a user friendly product which had mass market appeal. Had the British remembered the lessons of the first Speedtwin then it is highly likely that the Japanese manufacturers would still be confined to the Far East. In short, the Speedtwin is a keystone in the history of motorcycling.

This is a rather long preamble so let’s look at the bike and the fascinating history surrounding the Speedtwin.

First, we need to think of the historical context in which the Speedtwin made its appearance in 1937. This was the era following the Great Depression, which had killed off so much of the nascent motorcycle manufacturing industry in Britain - and the rest of the world. Having committed commercial suicide through excessive diversification, Triumph had been bought out of bankruptcy by John “Jack” Sangster who owned Ariel Motorcycles. Sangster only managed to pull off this deal through some very cute manoeuvring at asset disposal sales plus being very well connected in the Midlands motor parts industry.

In the late 1930s, there were some very fine motorcycles in production but the market leaders were predominantly sporting singles. A high performance single is still a wonderful animal for the hard core, sporting rider and there were some excellent bikes on sale. Excelsior had the Manxman, Rudge their iconic Ulster - with its fabulously exotic bronze cylinder head - and Norton would, subject to the factory’s erratic production, sell you a Norton International with a genuine 100mph performance.

The problem was that these cutting edge bikes were suitable only for the enthusiast. They were all expensive to make and demanded a lot of maintenance: they were even challenging to start! Everyone in the Pub claimed that they wanted a Norton “Inter” - but few spent their precious wage packets on buying a bike.

Move down a level to more affordable machines and the prospective purchasers were faced with a wall to wall selection of worthy, but dull, bikes. Black was the standard colour and machines like the Matchless G90, whilst sound enough motorcycles, did nothing to get the blood racing.

So that is the stage on to which the Speedtwin is about to make its debut. Now, what of the bike’s creator? Bert Hopwood, a contemporary of Turner’s, and later to be head of BSA, referred to him thus: “He was quite definitely the most egotistical man I have ever met...”

Hopwood, himself one of Britain’s leading, if not most successful, designers then went on to say: “As an engineer, Edward Turner seemed to lack the technical knowledge which must be embraced if engineering design is to be anything but guesswork. Indeed, he dismissed as ‘academics’ most of the people whose job it was to make sure, by mathematics, that the company’s (Triumph) products had reasonable factors of safety. However, he was an inventive genius and had a flair for pleasing shapes and an uncanny ability to ‘smell out’ what the buying public would readily accept.”

Hopwood’s summary was a very fair representation of all that was good, and bad, about Turner.

When Edward Turner joined Triumph in 1935 as, in his own words: “Works Manager,” “Sales Manager”, “General Manager” and “Chief Buyer” the company was seriously short of cash. However, it did have a range of well designed, and modestly successful, single cylinder machines which Turner promptly re-branded with the snappy titles of “Tiger 70”, Tiger “80” and “Tiger 90” - the number indicating the bike’s supposed top speed.

Admittedly, a 500cc “Tiger 90” would only manage a genuine 90 mph on the very best of good days - but there are not many owners of Fireblades or R1s which have seen a true 187mph from their bikes either! Truly a case of: “Plus ca change - plus c’est la meme chose.”

Turner had always been a fan of parallel twins. In fact his “Square 4” was actually a pair of conjoined parallel twins. It was no surprise then, that when he arrived at Triumph, the factory absolutely were going to have a twin. This was a fortunate set of circumstances because Triumph did in fact own an extremely clever, well designed and attractive twin which could have immediately been utilised. There was, however, a five star problem - at least in Turner’s eyes. Triumph’s existing twin was a product of the fertile brain of Val Page, who was unquestionably the finest British motorcycle designer of all time - and Turner actively loathed Page.

The first job was not to work on the new engine but rather to get rid of Page who was a genuine genius. With Page bundled off to Ariel, which was also owned by the Sangster family, Turner could get let his ego, and ability, get to work in equal proportions. At this point, just how perceptive Turner was becomes readily apparent.

Throughout his working life, Turner was blessed with an uncanny knack of knowing exactly what made motorcyclists buy bikes. This is easy to write but incredibly hard to achieve. First, Turner knew that mass sales would not come from a product which was too great a step from the known. Innovators are wonderful - but they never make any money. So, Turner’s Speedtwin engine looked very much like the Triumph’s existing twin port single - and many of its competitors too.

The new engine was actually narrower than the single it replaced and it was lighter too. However, it was vastly smoother and made more torque lower down the rev range than its single cylinder competitors. It was also easier to start than the singles and much less demanding to ride.

With clean external lines and fully enclosed, oil tight valve gear, the Speedtwin was ultra modern for 1937 - and in every respect a sophisticated motor. Yet, by having simple push-rod operated valve gear, the new engine used well known, and solidly proven, engineering so development time was minimal.

Turner also made the twin cheap and easy to manufacture so that from Day One, the Speedtwin generated profit for Triumph. A key part of the new bike’s commercial success was that Turner cunningly employed virtually the whole of the Tiger 90 chassis. The new engine simply slotted into the old single’s chassis using nothing more complex than different engine plates.

The four-speed Tiger 90 gearbox was a gem and the clutch light and efficient. All the single’s electrics were well proven so the Speedtwin simply went in to the Tiger 90’s bedroom and emptied the cupboard. It was no more complex than that.

Finally came the sprinkling of magic dust which Turner, at least at this stage of his career, carried round in his pocket. First, he refused to have the steering head angle at the optimum rake for precise handling. To do so would have cramped the lines of the new bike and Turner wanted it to look lithe, muscular and feline. Finally, he decided on what was to become the world’s most famous colour for a motorcycle: Triumph Amaranth Red - set off with hand painted gold lining.

This choice was utterly gifted. At a time when black was the standard colour for most of the world’s motorcycles here was a bike which was daring, adventurous and bold whilst avoiding being avant garde and so discomforting potential buyers. The message was brilliant: “Buy and Triumph and be different and edgy - but still stay safe.”

The result was a bike so instantly popular that only the most favoured customers were allowed to buy a Speedtwin from their Triumph dealer: Turner’s brand new baby was that popular!

So this brings us to the present day and a very interesting situation. On the one hand there are a lot of better 1930s bikes than a Speedtwin no matter what criteria are applied - whether it be speed, sophistication or build quality. Critics of the Speedtwin justifiably argue that it is the most over rated motorcycle in the world.

Then you see the deep, Amaranth red glowing softly in the sun and truthfully, you would have to loathe bikes not to go weak at the knees. Walk round the Speedtwin, examine it from any angle, lie on the floor even and try to find a flaw. Even from beneath, the bike is majestically flawless: not merely outstanding but 100%, utterly perfect.

Gently spin the engine into life and the twin burbles quietly and eagerly. Ease away and the torque is effortless belying the fact that the Speedtwin produced only 27 bhp - some third less power than the hot supersports singles of the day.

Cruise at 55 - 60mph - the sort of speed where the bike would have spent most of its life - and the ride is sublime. Is the Speedtwin something magical? Yes, it is the best.

And now for the bad news. Pre-War Speedtwins are now ridiculously, horrendously expensive for what is a very simple motorcycle with a sprinkling of magic dust. Expect a really nice one to fetch a solid £12,000 plus - and that’s lot of money even in these inflationary times.

Our thanks to Ben Walker of Bonhams for the loan of this bike.