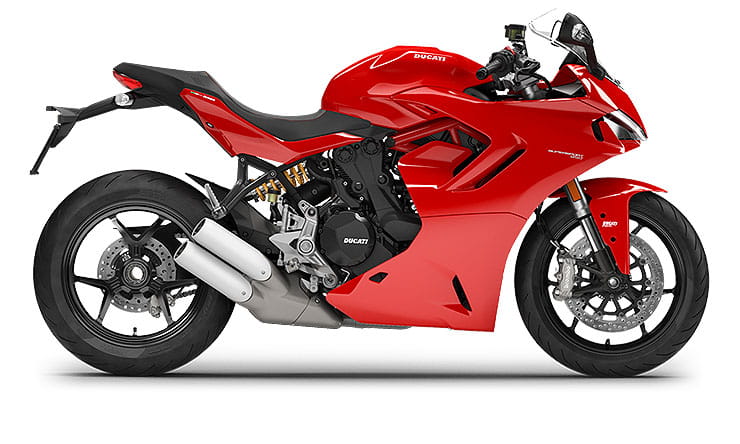 Which bikes are best for shorter riders? It’s been a perennial issue for shorter male or, particularly, women riders, of which there are more as every year goes by. And it’s a problem exacerbated on the one hand by the continuing popularity of both adventure bikes, which routinely have seat heights only giants and can master plus the upsurge in sports machines which, with their ‘bum-up, nose-down’ postures can be sometimes equally off-putting.

At the same time, however, an increasing number of mainstream manufacturers are commendably tackling the high seat height ‘problem’ by offering more and more bikes not just with adjustable saddles but also extra-low options as standard.

As a result, no longer are those looking for low-seated motorcycles restricted to traditionally low-slung customs and cruisers – although by their very nature they still make a good option – and there is now plenty of variety, across all types of bike, available. But which is best? We’ve analysed all the offerings, studied the spec and options and come up with this guide to 10 of the best, across all categories. 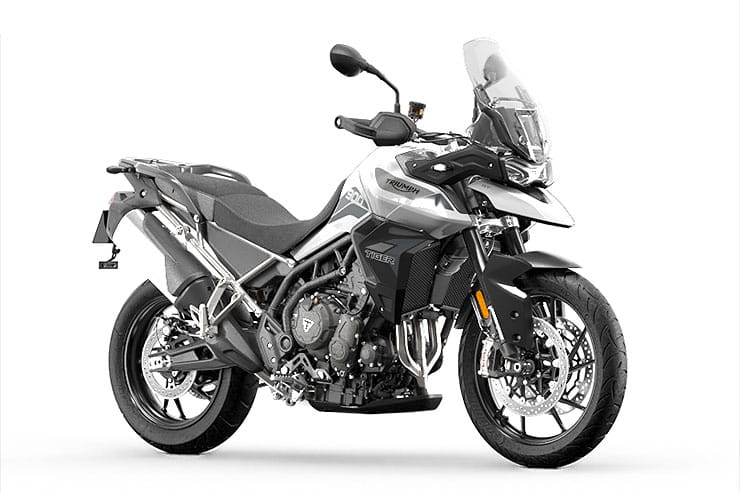 Although adventure bikes with their long-travel, off-road suspension and big wheels are usually among the tallest of bikes, the huge popularity and competitive nature of the class means that, increasingly, accessible ‘low seat’ variants are being offered, too. BMW led the way with its versatile and effective F750GS, which is available with both a 790mm low seat and 770mm suspension lowering kit as standard which, combined with its slim saddle and light twin cylinder engine makes it manageable for most. But one bike stands out: Triumph’s complete 2020 overhaul of its already popular Tiger 800 to create the new Tiger 900 resulted in improved performance (94bhp and 87Nm), Euro5 compliance, a new, sweeter handling chassis, TFT clocks and styling a choice of standard, GT and off-road Rally versions. Best of all, a GT Low version, which features a saddle a full 50mm lower than standard yet is still adjustable between 760 and 780mm, is significantly lower than not only the BMW but also rivals like Suzuki’s VStrom 650 (840mm) and Kawasaki’s Versys 650 (840mm). Who said adventure bikes were out of reach? 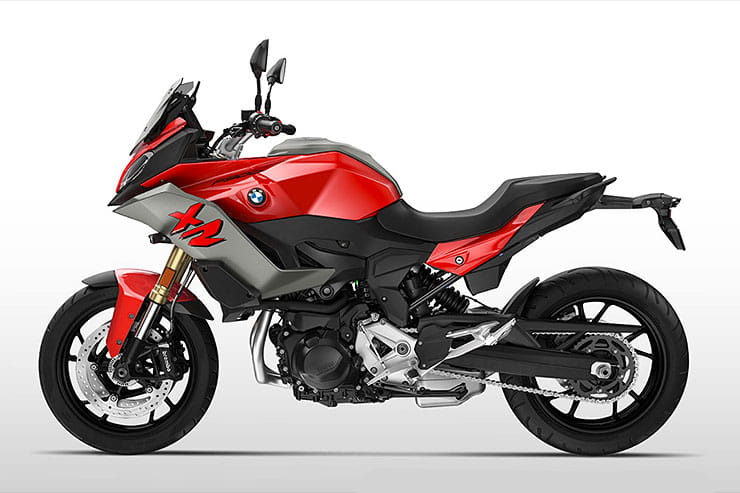 The German marque’s F900XR, as launched in 2020, is effectively a ‘junior’ version of the impressive S1000XR four-cylinder ‘adventure sport’ bike, but this time derived from the F850 parallel twin. The enlarged engine is good for 105bhp, which is right up there with Yamaha’s hugely popular Tracer 900; there’s a bespoke, road-orientated chassis, quality Brembo brakes, is comfortable, natural and versatile, has an easily-adjustable screen and comes with neat touches such as a colour TFT screen, with classy extras like heated grips and ESA available as extras. Better still is the fact that, priced from under £10K it actually undercuts the GT version of the Tracer 900. But best of all, surely, and especially in this context, is the fact that, like many BMWs, although its standard seat height is a fairly usual 825mm, a no-cost 795mm low seat version is available and if you want to go further still, as with the F750GS and others, a lowered suspension version, taking the seat height down to just 775mm, is also an option. 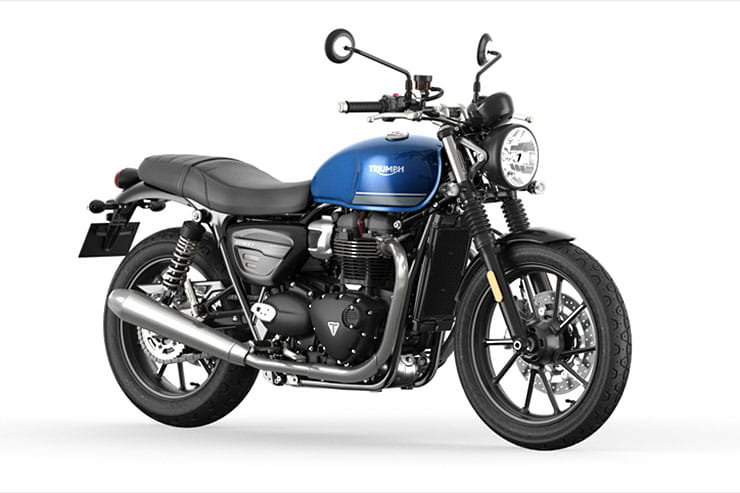 Retro roadster style bikes, modern machines with classic 1960s or ‘70s styling and, usually, the twin cylinder engines, tubular steel twin shock frames, bench seats and so on that goes with it, are naturally disposed towards having lower seat heights than average and generally this is compounded by the fact that the manufacturers of such bikes usually aim them at novice bikes. The result is the cute, recently revived Kawasaki W800 has a seat height of just 790mm, Royal Enfield’s Continental GT 650, has a saddle height of just 793mm while Moto Guzzi’s perennial V7 beats both with a seat height of just 770mm. All, being twins, are also relatively light, straightforward to ride and very novice-friendly. But besting them all is retro experts Triumph’s updated got 2021 entry-level Bonneville – the Street Twin. With an improved 64bhp, lithe and low manners and a saddle height of just 765mm it’s sure to be a big hit as an entry-level retro, both with men and women. 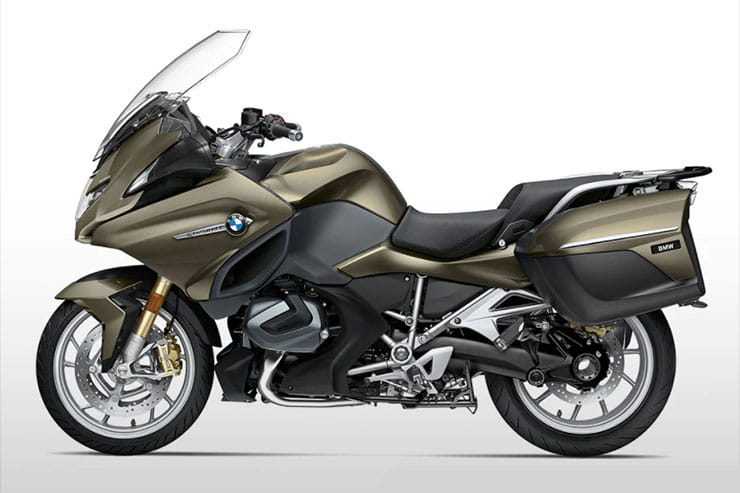 You wouldn’t expect any kind of touring bike to be easily accessible to shorter riders or those otherwise looking for a low seat machine – and with good reason. After all, being designed to offer easy, meaty performance, long distance comfort for two, having the ability to lug luggage and being fitted with all kinds of luxuries usually adds up to a big, heavyweight bike such as Yamaha’s FJR1300. But there are exceptions worth thinking about. BMW are not just habitual offerers of low seat options, the German firm’s specialty is also touring machines.  And although the middleweight, reasonably novice-friendly F800GT is now no more, its range-topping R1250RT, as updated for 2021 with new bodywork including radar-guide adaptive cruise control, new TFT dash and better electronics, shouldn’t be dismissed. Admittedly, it’s no lightweight, but being a twin it’s far better than you might expect. Manageability is fairly decent; comfort and touring prowess peerless, there are as many luxuries as you choose to option and it handles impressively well, too. Best of all, though, its seat height is a pretty impressive 805mm (and is adjustable to 825mm) which combined with the boxer twin’s relatively slim girth, means it’s far easier for shorter types to ride, too. 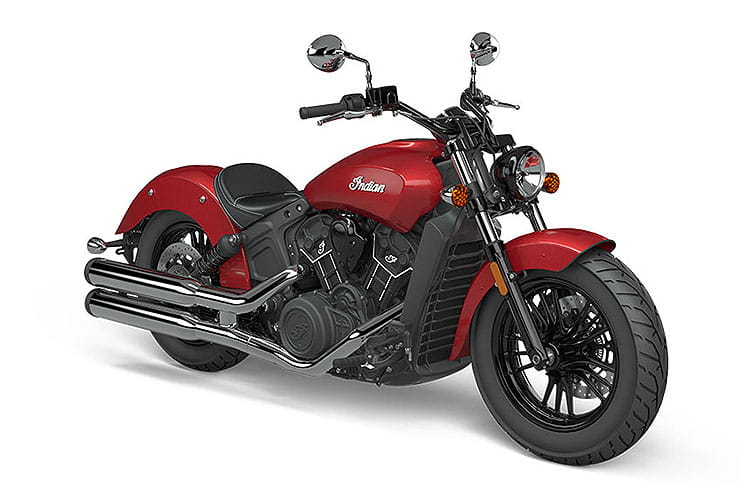 By their very nature in being ‘chopped down’, laid back cruisers, custom-styled machines are traditionally the most likely to have ultra-low seats and that’s still just as true today. In the past, the combination of a low saddle and slim V-twin engine made machines such as Yamaha’s XV535 Virago or, for those who could afford it, Harley’s Hugger hugely attractive, both for shorter chaps and, particularly, women. Today there’ s more choice than ever and it doesn’t mean you’re saddled (sic) with an under-performing, old-fashioned bike, either. Harley-Davidson’s offerings are plentiful, as you might expect, ranging from the novice-friendly 883 Superlow (with a 695mm seat height) to its ‘Big Twin’ Street Bob (675mm) and the even lower Softail Slim (660mm). At the other extreme Ducati’s hugely sophisticated X Diavel offers superbike-like performance but with a seat height of just 755mm. Then there’s Honda’s brilliantly accessible, A2-friendly Rebel 500 (690mm) and Triumph’s fine handling and uber-chic Triumph Bobber Black (690mm). But our pick of the bunch for being a great compromise of entry-level and full-bore cruiser, having a striking US style all its own and actually having the lowest saddle of the lot at just 649mm is Indian’s 78bhp Scout Sixty. 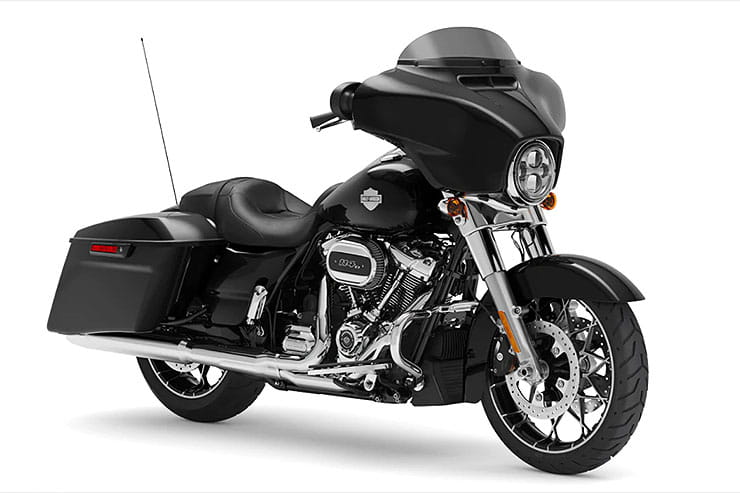 After tourers and cruisers, it seems only natural to next include baggers – US-style bikes which, basically, are a combination of the two. Harley’s Willie G. Davidson invented the breed when he chopped down a touring Electra-Glide to come up with the first Street Glide in 2008, a bike which has cruiser style but tourer comfort and luggage carrying ability and one which has proved so popular (it remains the USA’s best seller) that it’s now spawned a whole new class. By virtue of those two influences, the ‘bagger’ also usually has an ultra-low seat but also plenty of comfort and style. And although there’s now plenty of rivals, including the updated Indian Chieftain (650mm) and BMW’s own monster six-cylinder K1600B (750-780mm), the latest Harley Street Glide Special, now with the latest ‘Milwaukee-Eight’ engine, Brembo brakes, slick ‘Infotainment’ system and bags of inimitable style, remains top dog. And, with a saddle height of just 690mm anyone can ride it, too. 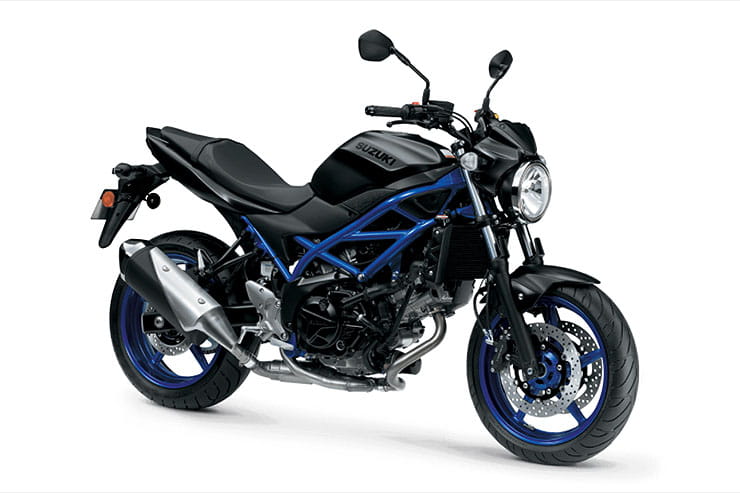 Conventional, ‘no-frills’ roadsters, unfaired bikes with few compromises for style or ambitions to ride anywhere other than on the road, might be expected to naturally offer fairly low seats as well. The truth, however, is slightly different. Many ‘nakeds’ are derived from sports bikes with their jacked-up rear suspension and aggressive riding position and even those that aren’t invariably employ monoshock rears, which have some of the same effect. Some, however, are designed for novices so make an attempt at being manageable and low. Yamaha’s hugely popular MT-07 has a reasonable 805mm saddle height; the rival Kawasaki Z650 is a step lower at 790mm and Honda’s A2-licence-friendly CB500F is slightly better still at 789mm. But our pick of the bunch is Suzuki’s SV650, a novice-friendly middleweight with a charming and eager (and slim) V-twin motor (that’s now also been updated for 2021 to meet Euro5), straightforward styling and manners, a very affordable sub-£7K price and, best of all, a seat that’s just 785mm off terra firma. 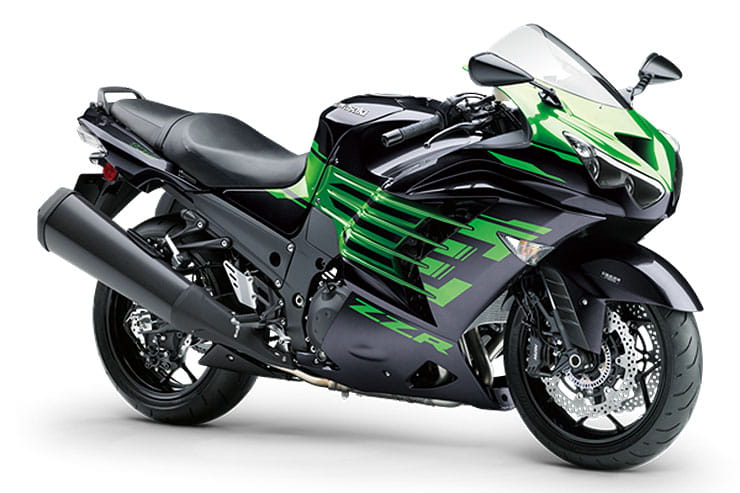 OK, we’ll keep this short and sweet for two reasons: 1, we don’t seriously expect many of those in the hunt for a short-seated bike would genuinely contemplate heavyweight, 190mph rocketships such as the ZZR1400 and Suzuki’s new Hayabusa, and, 2, the Kawasaki is likely soon to be no longer available due to Euro5. That said, it’s still worth knowing that hyperbikes such as the Hayabusa and ZZR14, while also having huge, 180bhp+ plus engines; heavyweight, low-slung chassis and lavish specifications also, because of their drag racing DNA, have impressively low seats – although this is counteracted somewhat by their bulky girth and hefty weight. Both are ballistic missiles among motorcycles and not for novices or the faint-hearted, but it is also worth remembering that their saddle heights are actually far more welcoming than most realize. The ZZ-R14’s, for example, is a meagre 800mm. 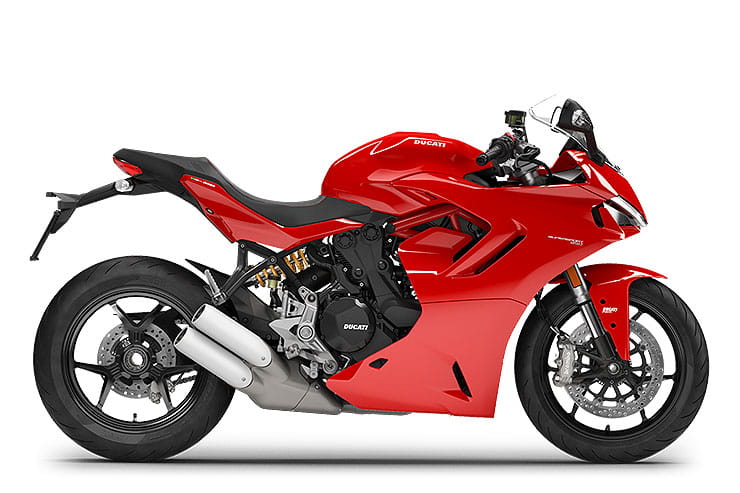 Similar to hyperbikes and adventure machines, the very character of today’s sports bikes, with their back-ends jacked up high and their fronts tipped down low, doesn’t sit comfortably with any desire to have a low-seated bike. The latest generation of 1000cc superbikes, for example, on top of having around 200bhp, the most sophisticated rider electronic aids and cycle parts known to motorcycling, also invariably have fairly lofty saddle heights around the 840mm mark. So, not only are they daunting to ride, they’re daunting to get on in the first place. Tallest is the latest Yamaha R1 (855mm) followed by the Ducati Panigale V2 (840mm), Kawasaki ZX-10R (835mm), Suzuki’s GSX-R1000 (825mm) and BMW’s S1000RR (824mm) with the best being the Honda Fireblade, at 820mm. But if you’re prepared to settle for something a little softer and less extreme – and we’re not talking about going all the way down to the Honda CBR650R, at 810mm, here – you can get something with a reasonable saddle height. Ducati’s Supersport is the prime example: Updated for 2021 to meet Euro5 while also gaining revised styling including a new LED headlight, it has a real world 110bhp V-twin, a typically fine-handling Italian chassis, fabulous looks and, at 810mm, a seat height that’s within reach of most riders too. 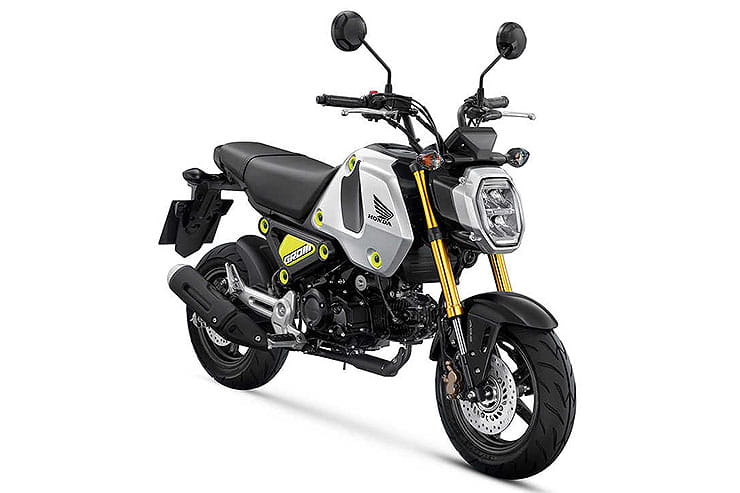 You’d expect 125 learner bikes to be manageable and have low seats – that’s what they’re designed for, after all: to be unintimidating and easy to ride for novice riders. But some are better than others. And while Honda’s cute commuter CB125F, has an ultra-low saddle height to go with its easy-going, single cylinder engine, ultralight weight and idiot-proof manners, there are others that are better still. We expected Honda’s recent Monkey 125 to come out top – it is a fun, minibike after all, but its saddle is actually a touch higher than the CB’s. Instead, apart from AJS’s stretched-out custom Daytona 125, whose seat is just 640mm off the ground, it’s the bike the Monkey is based on, the hugely-cute, small-wheeled minibike, the MSX125 ‘Grom’, which is so easy to ride and so fashionable it’s become something of a cult machine, that comes out best of all. Significantly updated and restyled for 2021 and with an even lower seat height of just 761mm we defy any short rider to require anything lower.

Fancy a used option? Here’s our five of the best:

Entry-level GS is most affordable and accessible BMW adventure bike.