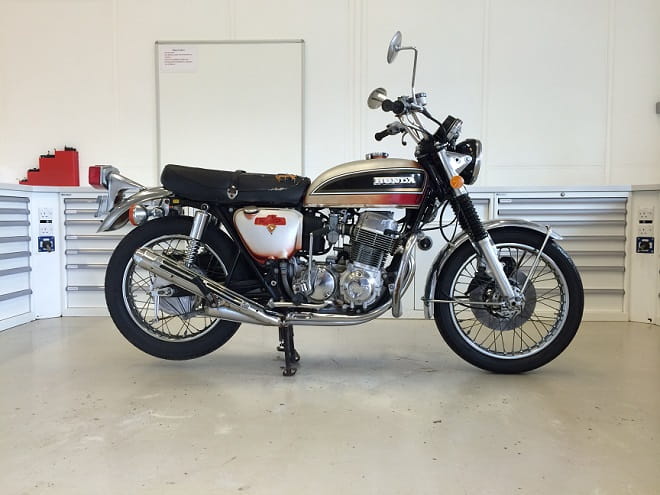 Rescued from a life rusting away in Colorado, with 150+ hours of work going in to a full rebuild, our Honda CB750 has been transformed into a unique road rocket ready for its appearance at Motorcycle Live, and a life on the road with the Bike Social team. Above is what we bought - a bike way past its best. Below, is what we created.

But dip your brogue or check shirt in the scene and hang around any of the brilliant BikeShed.cc events and you’ll soon work out that their ‘built, not bought’ philosophy stretches to anything goes. From humble Honda CG125s to big ass air-cooled Ducatis, anything is welcome, everyone of any shape, size, or girth of wallet. It’s not about how you look, what you wear, or where you live. It’s about bikes and the love of a simpler life. Stick on a leather jacket and a pair of jeans and just ride.

We’re big fans of the whole scene and cool websites like BikeEXIF and BikeShed.cc. 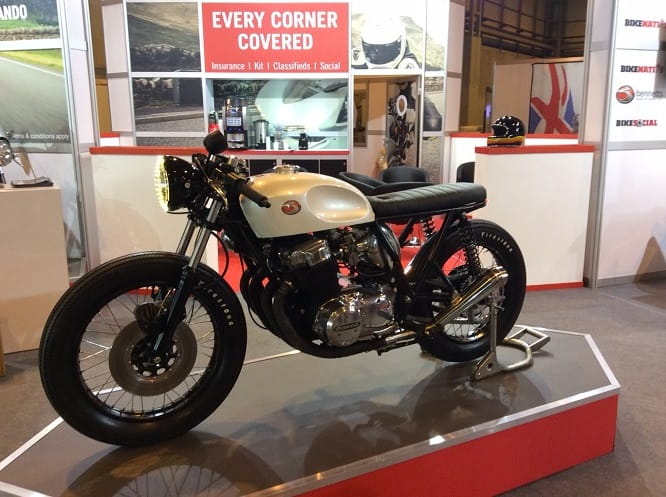 The BikeShed.cc is a website that the team at Bike Social obsessively check to drool over some of the creations from the mind of men who build, not buy their bikes.

We wanted something special to use as a bit of eye candy for Bike Social events. Something with a heart, and a soul that would be unique to us.

Undecided if we wanted a Cafe Racer, or a Brat style bike, we just knew that somehow felt like it had more attitude than just a regular classic bike, something that we could truly say was a one-off. Ours. To keep. To ride. To tinker.

We needed a bike that we could enjoy riding to events up and down the country for Bike Social, but that would draw a crowd when parked on our stand.

For years we’ve been getting our bikes fixed-up and hanging round the workshops of IDP Custom Moto watching owner Daryll Young’s creations come off the work bench. In fact, as a teenage boy I raced in Daryll’s team with some kid called James Toseland, he never came to anything, me, well  that’s a whole  different story…

But over the last few years Daryll’s ideas, talent and vision for one-off custom specials has developed.

From the Dominator-based street tracker creation for Pata Honda WSB PR man and friend of Bike Social, Steve Booth, to a host of CB550s including a bike for WSB hero Jonathan Rea, and a Dominator Street Tracker built for Carl ‘I’m a Celebrity, Get me Out of Here’  Fogarty, we’ve been seriously impressed with IDP’s custom division creations in the last 12-months. Also, you may have seen the Ducati 916SPS they recently restored as a cover bike in MCN.

So when it came down to building a bike for Bike Social, we knew where to turn, and the Bike Social CB750 you see here is the result of that work.

After weeks of debating what we should use as a base bike, ranging from GS550s, to more modern nineties CB750s, and even a cheap KTM RC8 that had been crashed, we finally decided on a donor bike.

Rescued from a life of neglect and abandonment in Colorado, the 1974 Honda CB750K4 was shipped over to the UK. A deal was done and we were the proud new owners. However, we’d barely got it into the workshops and kicked the (flat) tyres before the bike was disassembled and in a million pieces over IDP Custom Moto’s workshop floor. 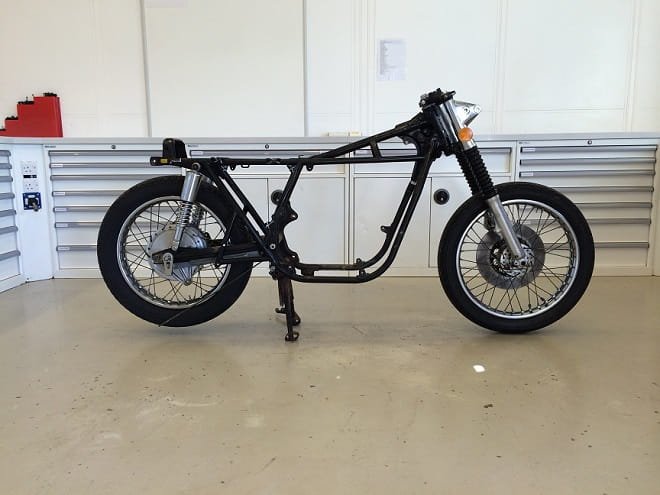 The clock was ticking towards the deadline of the bike’s debut at Motorcycle Live on the Bennetts and Bike Social stand, and the IDP boys were keen to get on.

Inspired by some of IDP’s previous builds, and with a view that we actually wanted to use this bike, so it couldn’t be too radical, we devised a plan based on Daryl’s experience.

His vision was to keep it simple. Make the most of that gorgeous oil and air-cooled lump of a motor, but strip it back, leaving only the bare essentials that the bike needs. It’s exactly what we’ve got. The CB750 has taken on a new lease of life. It’s a bike with a beating heart. It’s stripped back and beautiful yet with loads of attitude coming from the blacked-out look and that lowered stance.

IDP Moto took on a full rebuild with some 160+ hours involved. It was taken down to every single nut and bolt.

The motor had only done 22,000 miles and after compression tests and some inspections with the top-end was taken off, the motor was deemed fine. Rough around the edges, the engine was stripped and painted black, and the engine cases polished as a contrast. Inside is standard and the finest Honda offered in 1974, but the open bell mouth carbs and free-flowing exhaust system free up a few more horses. 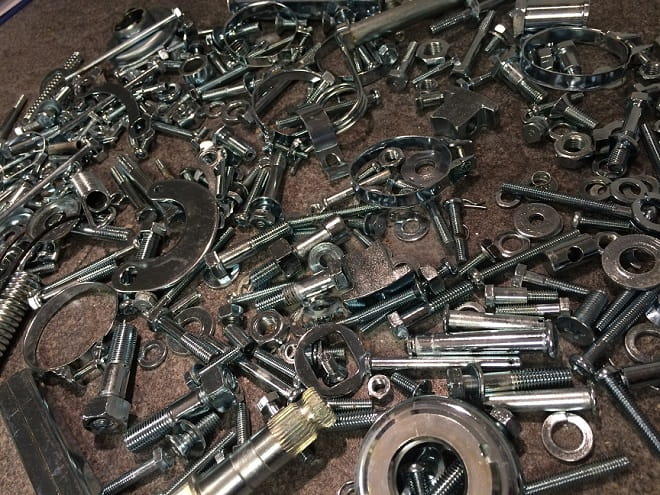 At the rear we decided on two hand-made MotoGP style exhausts made in Northampton, and the frame was angle-grinded down and shortened for one seat and then powder-coated black.

Where possible any cables are routed out of sight, and a new oil tank was made to give us that see-through looks where the oil tank and the side panels should ordinarily sit. 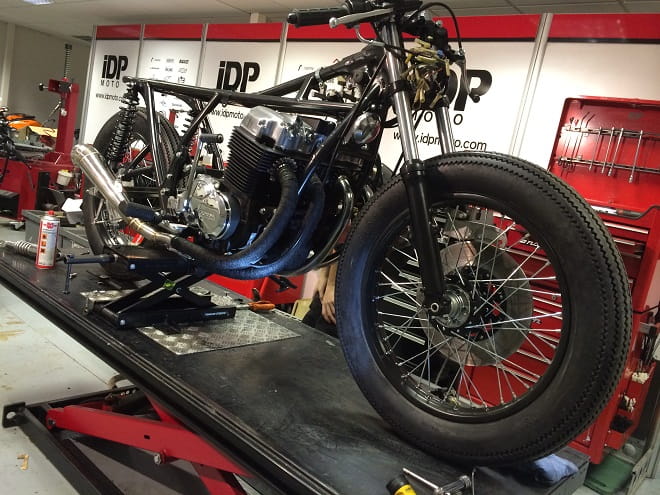 Any brackets inside the frame triangle have been cut-out, and a handmade oil tank sits behind the engine. The battery is hidden in a box at the back of the engine. It gives the bike that feeling of lightness at the rear, leading your eye to that massive four-cylinder engine, and those gorgeous deeply polished engine cases.

New black rims were laced up on polished standard hubs. The swingarm too was dipped, stripped and powder coated.

Every nut, bolt, bracket, and spring or washer on the bike has either been dipped and plated, or replaced if it really wasn’t worth re-using.

So essentially we have an all-new bike, even though it’s fourty years old.

We wanted to use the standard petrol tank but as they’re not quite as pretty as the CB550 tank the guys at IDP cut and shaped it with knee cut-outs to give it more of a shapely look. Paint is done in-house with a pearlescent base and the subtle Bennetts logo made into tank badges. The lines are hand-painted.

The forks are standard with Bitubo internals to stiffen up the front-end, and fat Firestone tyres are fitted, in Daryl’s words: “To give it the impression that that big front wheel is dragging the bike along.” There’s no front mudguard, that would just ruin the vibe.

At the rear we fitted adjustable Bitubo shocks to bring the bike’s rear-end up to date and bring the seventies relic right into the here and now. Up front is a black LED headlamp, and the area around the yokes have been cleaned up with a new bracket made and a set of Acewell digital clocks with a needle rev-counter and LED speedo. Clip-on handlebars fit around the standard forks and had to be spaced-out to clear the master cylinder and its new brake lines.

At the rear-end we’ve brought the bike bang up-to-date with a MotoGP-style strip light tucked under the handmade seat.

The leather seat itself is hand-stitched by a guy who does seats for Aston Martin (IDP are keeping his identity secret!), and the seat unit is handmade. That hole in the seat is designed to be able to clip your helmet on the side and perfect for my new Biltwell Bullit. It may cool your bum down in the summer too!

THE RIDE (to be continued):

The whole effect is exactly what myself and Daryll had in our minds and the guys have done a grade-A job. It’s not radical – it was never meant to be. It’s biking made simpler. Stripped back, with a whole load of new style and a stance that means business. We can’t wait to get on and ride it, but as the bike was only finished on the eve of Motorcycle Live’s opening day we’re yet to get in the saddle. But believe me when we say it does sound absolutely fantastic. The two MotoGP exhaust ‘silencers’ aren’t illegally loud, but you can definitely hear it coming.

Remember, this ain’t no show pony. It’s built to be ridden. We’ll update the story with riding impressions and a video of it in action soon.

Come and see  the Bike Social CB750 on the Bennetts stand at Motorcycle Live from November 22 to 29. And if you don’t like it, tough, we do.

Fancy some of the same, give the guys at IDP Moto a shout or pop in to their Silverstone HQ for a chat. 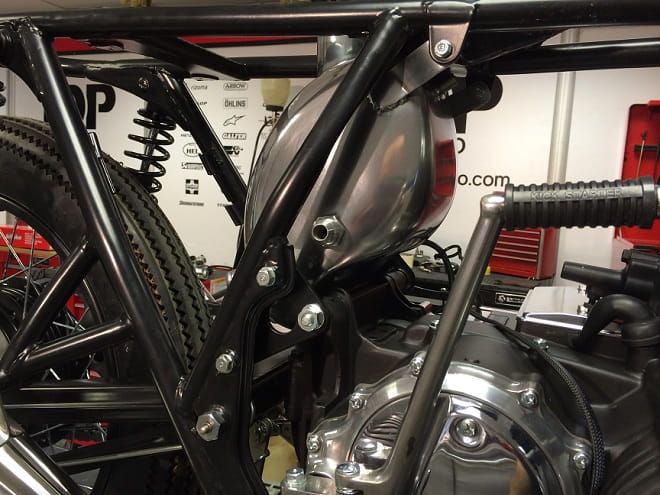