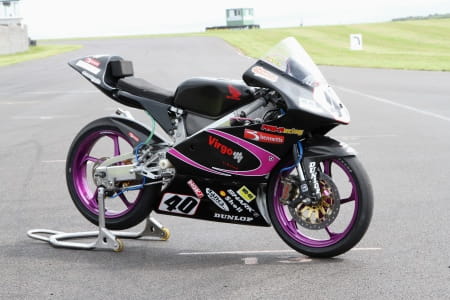 There is a very apposite saying amongst racers when they hear armchair experts giving their opinions. It’s this: “The track looks very different on the action side of the Armco.” Truly putting the racing world to rights, whilst watching TV, is a heck of a lot easier than pitching a bike into a corner at 100mph.

I must confess to being guilty as charged in this respect because I never was a fan of modern 125 GP racing with its identical single cylinder, six speed two-strokes which all looked and sounded almost the same.

Having now ridden a 125 GP bike, I understand why Grand Prix insiders always considered the 125s to be an ideal feeder class for MotoGP before the advent of Moto 3. In short, these tiny race bikes are miniature versions of full on Grand Prix machines and mimic the behaviour of what the very best riders would later go on to achieve. 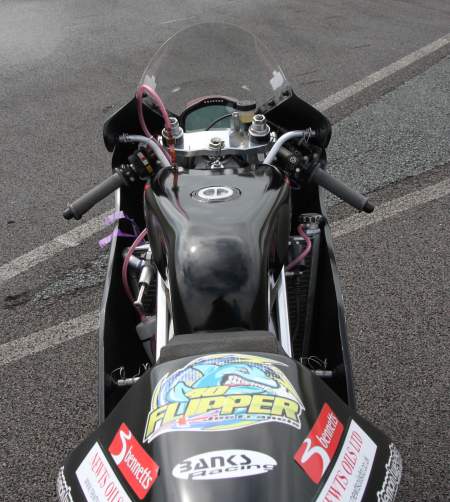 The difference between a GP bike and a conventional race bike is difficult to overstate and this begins right at the core of the motorcycle. The Honda RS125R was sold as a serious, over the counter race bike and wasn’t cheap at a shade over £8,500. However, the price tag really only bought the would-be GP racer the right to spend a lot more money in making the bike competitive. To get an RS125 to race winning standard, around a further £13,000 is needed. Now the price tag is over £20,000 - which is a long way from entry level racing.

Racing at this level requires a lot of money and Joe is fortunate in having the backing of Bennetts who have made a long term commitment to a rider they see becoming a truly world class rider in future years.

Our test bike was the sister of the one used by teenage superstar Joe Francis, in the 125cc Motostar class of British Superbike Championship, and to compete at this level the basic bike has to be very heavily modified.

The heart of the motorcycle is a 54mm x 54.5mm single cylinder, six speed, two-stroke engine which, on paper at least, looks deceptively simple. Induction is through a crankcase mounted reed valve and the pre-mix fuel is fed through an old fashioned 40mm carburettor. However, the only parts of Joe’s bike which remain standard are the crankcase and dry clutch. The cylinder barrel, cylinder head and exhaust are all “A” kit, top specification. The radiator is also a GP level item – the importance of this will become apparent shortly.

The result of this package is an incredible 44hp at 13,750 rpm – vastly more power per cc than a MotoGP bike makes.

Although on paper a very simple machine, the reality is that Joe’s Honda is an extremely sophisticated piece of kit. The BPS ignition has full data logging, including a detonation counter without which it would be almost impossible to race the bike.

If most of the engine ends up on e-bay, then the rest of the bike isn’t far behind. The alloy spar frame is of massive proportions for such a small, and feather light, bike and the swinging arm is built to the same standards. The frame, swinging arm and rear brake are the only things which are retained from the original Honda. The Honda front forks are completely re-worked internally by British suspension experts, Maxton Engineering, and the rear shock is now an Ohlin TTX unit.

A special seat and tank unit large enough to accommodate Joe, who is heading towards six feet tall, are used and at the front a Brembo XA3 Radial Calliper and Brembo Floating Disk stop the bike. And, truly, stop is the accurate word.

Total weight, on the start line, is a startling 70kgs (154lbs). This is a bike which you don’t so much run up a ramp into the back of the van but merely lift in!

Before I am allowed to ride the bike I need the essential briefing from Joe’s Dad, Troy. If I ride too slowly, and don’t keep the temperature above 50 degrees Celsius I will cold seize the bike. I would also hot seize it, should I run the bike too hard at low speeds. If the detonation counter registers repeated hits I will blow the engine up.

The detonation counter is the golden key to performance on 125s. The carburation and ignition timing are set as close to the point of seizing as is possible and the det counter gives a warning of pre-ignition. The closer the tuner can run the bike to the point of seizure the more power it will make - but the slightest error will mean a wrecked engine. It’s not slot machine stupid gambling but a sophisticated game of poker against the weather, fuel, track conditions and rider style on any given lap.

Joe then joins in the fun by warning me about the dangers of trail braking into the corner. To (mis) quote the Holy Beach Boys of California. “We’re going to have fun, fun, fun until Troy takes the GP bike away.”

Having spent a life-time racing, and riding, race bikes I am hyper sensitive to the body language of a race bike and the staccato crackle which emanates from the tiny stinger of the Honda tells me all I need to know: this is a serious race bike.

Because of Joe’s height, there is plenty of room – a surprising amount in view of the tiny overall size of the bike – but there is no debate that this is a full-on GP riding position with the footrests set high, and well to the rear of the bike, and the ‘bars low and narrow.

With the engine warmed up, I am given permission to coax the little Honda on to the fabulous Anglesey race track. The conditions are good – cool but sunny and dry – and, as far as I am concerned, just a normal Anglesey sea breeze.

The motor is sweet and eager. It picks up easily from zero rpm but getting the bike to move is a rather inelegant series of hops as the dry clutch bites viciously and the power dies instantly.

The Anglesey track is wide, ultra grippy - and empty. I am grateful for all three as I tip toe out feeling very stressed. The problem is that the Honda can only be ridden one way: hard. There’s no hiding place and nowhere to learn gently: the bike simply demands to be mastered.

Once the motor clears the excess oil from being warmed up, it jumps into the power band in half a blink of an eye. Joe tells me to change gear at 13,000 rpm but the digital tachometer is almost impossible to see so I rely on the Formula 1 type rpm indicator. Five red lights, the lightest of touches on the gear lever and the quickshifter engages the next higher gear and the process starts all over again.

It’s relentless, exhausting and a galaxy away from a classic race bike or even the road bike derived Superbikes I have ridden in the past. Rev. Change. Rev. Change. The process is infinite.

Not that I have much of a problem with the power. 44hp is well within my comfort zone in terms of acceleration and top end speed – the real culture shock is stopping. With the latest Dunlop slicks, it is difficult to articulate just how fast this bike stops. 100mph to 30mph in a blink – every single corner. The Brembo calipers will simply lock the front wheel solid at 120mph – with one finger pressure and this means that the rider workload is immense.

After ten laps I am aching with the effort of locking my arms and trying to hold up nearly 200lbs of rider. This is why GP riders are light, small and ultra-athletic.

The brakes are also another reason why GP gurus like 125s. Joe has warned that the wheel will lock in an instant when the point of no return is reached. The young rider who can trail brake right up to 99.999% - and not crash – is going to be the MotoGP star of the future.

I am fit for my age and, in particular, have good aerobic performance. Braking apart, it’s not so much the physical effort of riding the Honda which is exhausting but the mental commitment the bike demands.

Every inch of the circuit has to be ridden. There is no downtime, nowhere to relax or take a break – just thought and effort. The chassis is taut beyond belief and so willing to obey commands. You want to tip in hard – no problem. Change line – available in an instant. Tighten a racing line: yes sir. But all at a cost – and the price is constant rider input. Every fraction of a second you need to be giving commands to the bike. 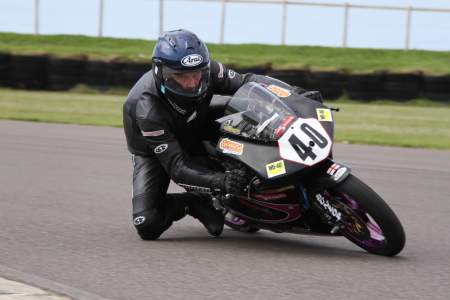 It’s a busy ride too. The little Honda wheelies out of corners so you move your weight forward and what I thought was no more than a mild sea breeze blows the bike all over the track.

I brought the bike back to the Francis family a changed rider – full of admiration for Joe and his racing compatriots and delighted that Troy had his beloved bike returned without any scratches! And I’m also deeply grateful that I race such a lovely, soppy Labrador puppy of a race bike which is my classic Seeley Suzuki.

My thanks to the Francis family and to the Anglesey Race Circuit for allowing us to use their wonderful track. 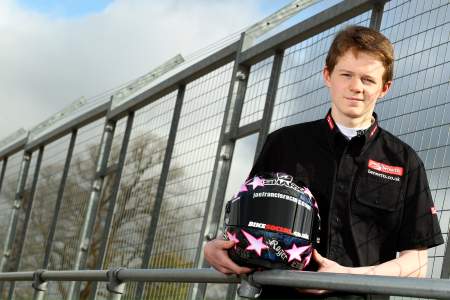 What makes Joe special is not only his speed on the track but his willingness to learn and be more than just another quick rider. He wants to know everything about what it takes to be a champion and this is refreshing. Equally unusual is that Joe is polite, modest, charming, articulate and intelligent – and these are adjectives you don’t automatically apply to bike racers – young or old.

He is also fanatically determined not merely to ride quickly – there are a lot of young men, and women who are fast on the track – but also to learn what it takes to be a professional athlete and so be treated the same as other sports stars.

In many ways, Joe is the best possible face of motorcycling’s future and I wouldn’t bet against you seeing him on a GP start line before too long.

It’s not only me who sees him like this. For the last three years, Joe has enjoyed the support of Bennetts. Here’s what Michael Mann, from Bennetts’ Bike Social, thinks of Joe.

“Joe was just 13 when he came to our attention as a shy and polite young man but with the potential to be a future World Champion.  When the visor goes down and the lights go off he demonstrates a fabulous fighting spirit making calculated and decisive moves on his opponents yet off the track he is already turning into a fine young man, a sponsors favourite.  We are proud to support a genuine young British talent and predict good things for him.”