If you’re between the ages of 19 and 24, get your provisional licence, take your CBT and pass your theory and practical tests, you qualify for the A2 licence category which, in simple terms, is restricted to bikes of up to 47bhp.

Some models have fallen by the wayside due to failure to comply with Euro5 regulations, Kawasaki’s Ninja 400 among them, but with more and more A2-specific bikes coming onto the market, not to mention increasing options for larger, A2-restricted machines (which we’re not dealing with here), which should you go for? Here’s our pick of the latest and best purpose-built A2 bikes, in price ascending order… Prestigious German marque BMW were latecomers to the A2 category with this all-new, Indian-built, single-cylinder roadster only being introduced in 2016, but it’s since been joined by a GS version (currently £5435) and for 2021 both have been updated to comply with Euro5 and get a raft of other updates, too, with slightly revised styling, slipper clutch, LED lights and ride-by-wire. Sure, the 34bhp from its novel reverse-cylinder, 313cc single isn’t much to get excited about, but the 310R is very novice-friendly and flexible; the upright ergonomics are good; it’s easily manageable and the revised S1000R-esque styling, complete with sporty nose cowling and inverted forks is eye-catching. It’s not bad value, either. As an entry into the world of BMW it’s tempting indeed. Austrian manufacturer KTM has its roots in off-road and supermoto and its lightweight road singles reflect that heritage with an emphasis on perky performance, lairy style and lively handling. In the A2 category, its 390 Duke is the fun-packed joker in the A2 pack. It’s powered by a liquid-cooled, 373cc single that has been updated for 2021 to comply with Euro5, puts out a respectable 43bhp and is a hoot to ride, especially around town. Its diminutive size, light weight and slimness counts against it over distance or for larger riders but the orange Austrian is still a very tempting buy. 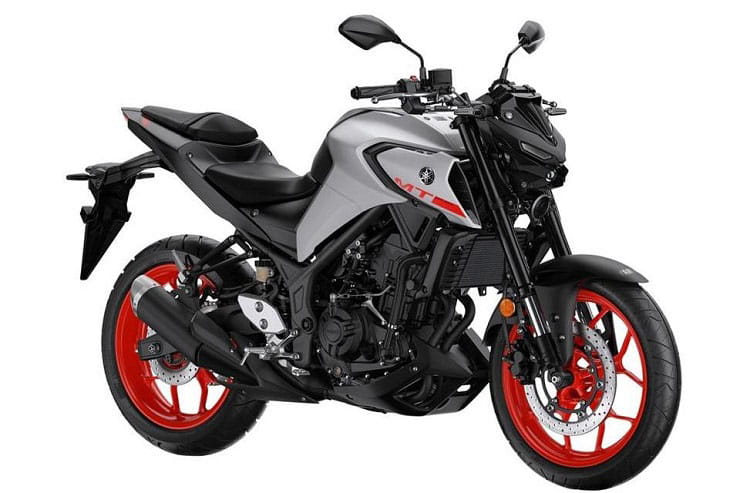 Following the lead of its sportster sister bike, the R3, as significantly updated in 2019, the roadster version of Yamaha’s 321cc A2 twin also received a major makeover in 2020. Although the perky, 41bhp powertrain is largely the same, the MT got new, more aggressive styling, improved front forks, a new LCD dash and tweaked rear shock. But although more aggressive-looking, the MT-03’s riding position is comfortable and upright, but now places you more over the front end for a more engaging experience. Better looking and classier, the MT-03 is one of the better A2 roadster options – but it also faces still competition from the likes of Honda’s CB500F. 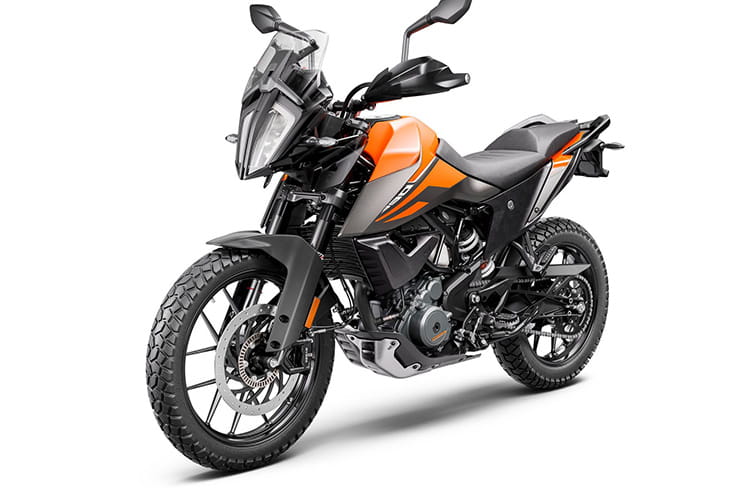 The most junior adventure bike offering yet from Austrian off-road and adventure bike specialists KTM, first landed in 2020 based on the perky Duke 390 single-cylinder powertrain and like that bike is fully A2 and now also Euro5 compliant. Unusually for KTM, however, the 390, unlike its bigger 790, 890 and 1290 Adventure brothers, is very much a novice-targeted road bike, with road wheels, although it is capable of gentle trails. With longer suspension than the Duke plus upright bars and a touring screen, it’s better suited to taller riders and longer distances than the Duke while still offering plenty of perky fun from its 43bhp engine and lightweight, nimble chassis. Like most manufacturers, Yamaha offers a dedicated, A2-compliant bike in both sports and naked roadster variants. In Yamaha’s case these take the form of the sportster R3, as first introduced in 2015 and then called the YZF-R3, and the naked, more upright MT-03, which followed a year later. Both are built in Indonesia to keep costs low and are based around the same, perky, 321cc, 41bhp parallel twin motor. The R3 received a major update in 2019 which much sharper, R1-alike styling to bring it into line with the rest of Yamaha’s sportsters, improved suspension, new LCD dash and more. The result is one of the sportiest-looking (and handling) of A2 sportsters, even if its engine hasn’t quite as much go as Honda’s CBR, yet its riding position and practicality is actually friendlier and more novice-suited than ever. Indian-owned Royal Enfield’s all-new, retro-style 650cc twins, the roadster Interceptor and café racer style Continental GT have been a revelation since they were launched in 2018 becoming not only best sellers for their combination of credible, accessible retro-roadster style and Triumph Bonneville beating value, but also, by producing 47bhp, for conveniently falling within the A2 licence classification. As such, they’re by far the most tempting A2 retros available. Both are mechanically virtually identical, with an air-cooled twin producing smooth, pleasing performance and a twin loop chassis that, while a little budget, is sufficient and entertaining. The more upright, different tanked Interceptor is the more conventional, and £200 cheaper. The Continental, although being café racer style, is barely more extreme, although it’s difficult to argue for as a better buy. They may lack the crisp quality, extra performance and refinement of Triumph’s more established Bonneville family, but both tick nearly all of the retro boxes, are A2 compliant and are undeniable value. 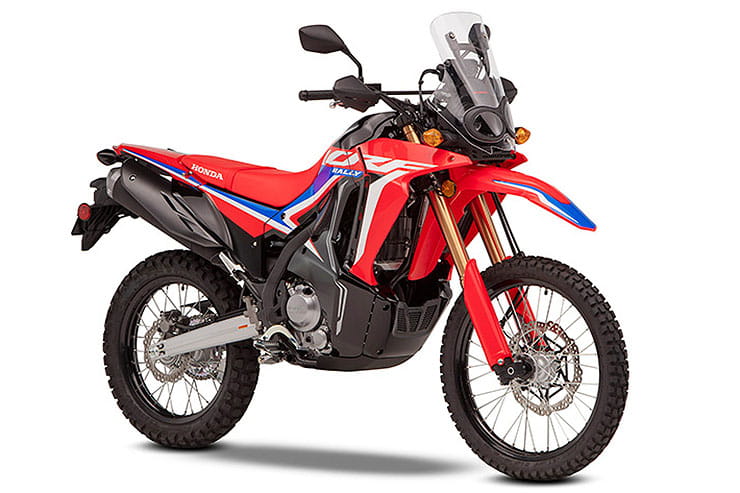 Originally introduced as the CRF250 Rally in 2017, the Rally is a semi-adventure or Dakar Rally-style version of Honda’s CRF, single-cylinder trail bike. With a larger (10.1litre in place of 7.7litre) fuel tank plus wind-cheating screen and bodywork it’s longer-legged and better over distance than the trail bike L, making it a better all-round road machine. While the move from 250 to 300cc for 2021 brings with a worthwhile boost in power from 23 to 27bhp. It’s still a fairly specialist A2 offering and should only appeal if you’re serious about off-roading (if not, Honda’s CB500X is a far better option), but the Rally is unquestionably stylish, decent around town, reasonable over distance and one of the best off-road. 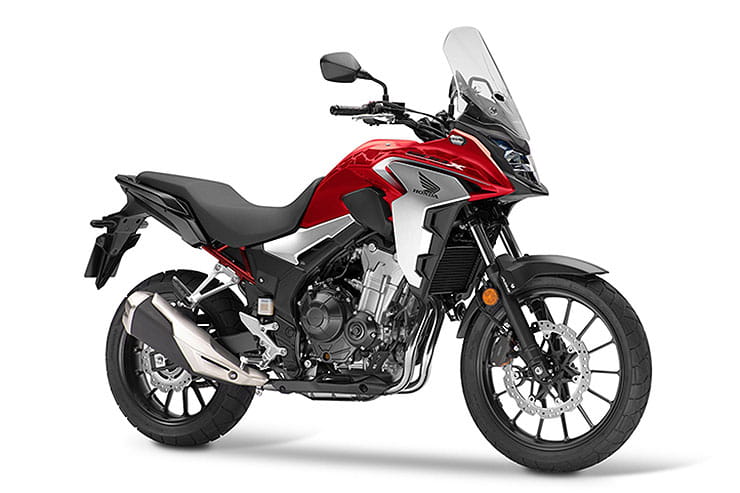 Honda’s adventure variant of its A2-licence specific, 47bhp, CB500 twin family, which also includes the CMX500 Rebel cruiser, CB500F roadster and CBR500R sportster, as also picked out here, is one of the most popular A2-compliant bikes of all – and with good reason. First introduced in 2013 it was an instant hit for its combination of smooth, flexible twin cylinder performance in a class otherwise dominated by lumpier, lower-powered singles while its roomy, upright performance and reasonable weather protection both suited larger riders and made it a great all-rounder. Updated repeatedly since its most significant refresh so far came in 2019 when it received a larger, more adventure-style 19inch front wheel, longer travel suspension and res-style ≠ although it’s still pleasingly unintimidating and a doddle to ride. 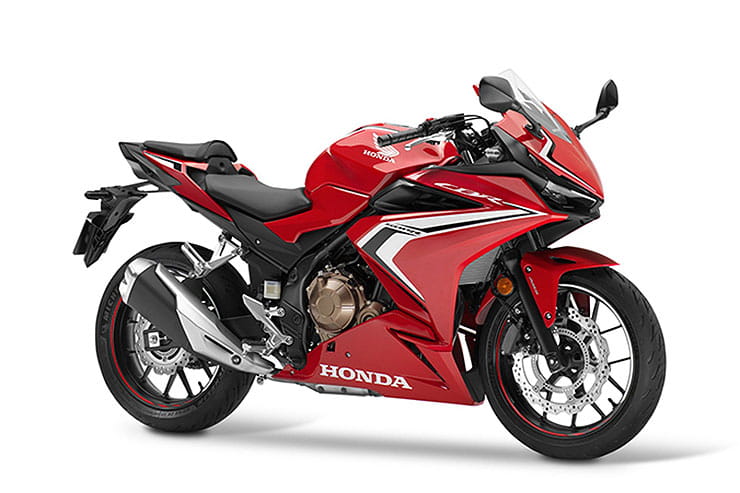 Introduced in 2014 as the sports variant of Honda’s purpose-built, three-strong, A2-compliant 47bhp, 500cc twin family, the CBR was designed to fully exploit the new regulations in terms of performance but also, in typical Honda vein, be a quality, affordable machine in its own right. It succeeds on all counts. As a full, 471cc, 47bhp, parallel twin it’s substantial yet in no way intimidating. The chassis is nimble, manageable and comfortable. It’s decently equipped and stylish (especially since its latest 2019 update which brought sharper styling, engine revisions and further improved suspension) and yet, due to its fairly basic components, modular approach and the fact it’s built in Malaysia, it remains impressively affordable, too. The Street Triple S, however, still has bags of appeal for being a genuine, full-size Street Triple that complies with the A2 classification. Yes, it’s 50-odd bhp down on its siblings and its spec is more basic, but this is a far bigger, meatier proposition than most other A2s – with the more substantial price to match.