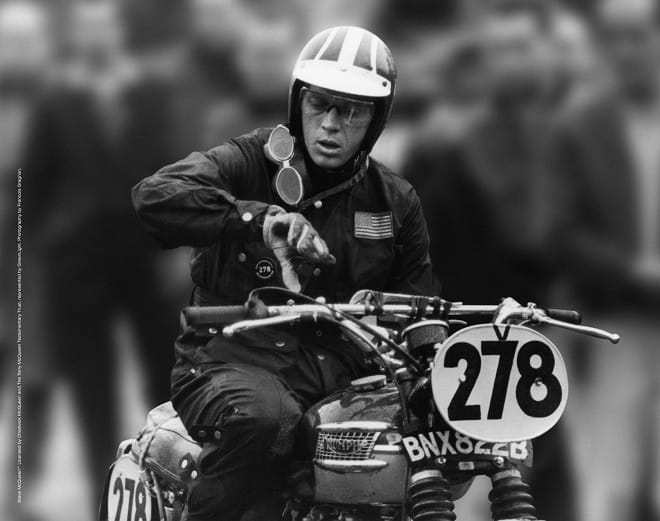 Hollywood’s most famous biker has been regularly celebrated for not only his riding in The Great Escape (as both escapee Hilts AND pursuing Germans, aboard, not Wermacht BMWs but Bud Ekins-prepared TR5 Triumphs), but also simply because he was a damn good rider – so good he and a bunch of mates were allowed to be the first team to represent the USA at the International Six Days Trial (ISDT) in 1964, in East Germany. Less well known is that, en-route, the team visited the Triumph factory at Meriden to pick up their bikes, which is why his famous machine, no. 278, bears a British registration plate. 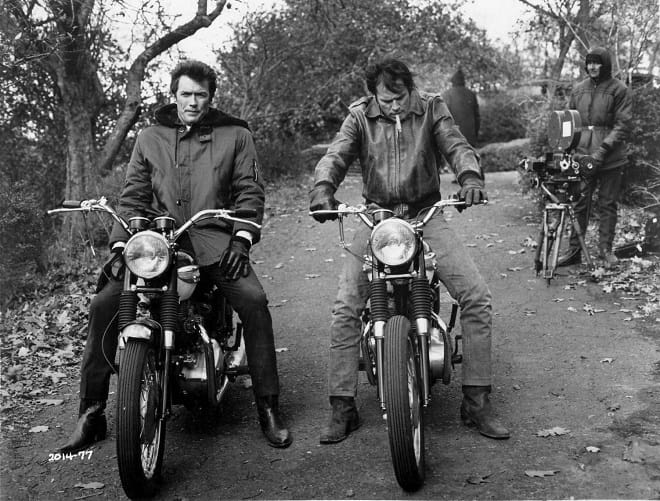 Arguably more of a Norton man, having fallen for a Norton Ranger he bought for sightseeing in London while filming Where Eagles Dare in 1968 not to mention a Commando S (the scrambler version) he used during the filming of Kelly’s Heroes in Yugoslavia in 1969. He also later kept an S at his Carmel, California home which is shown in a Superstar Profile filmed in 1978. In the movies, however, he was mostly seen on Triumphs, most notably a 650 TR6 during a famous bike chase scene through Central Park, New York, for Coogan’s Bluff. 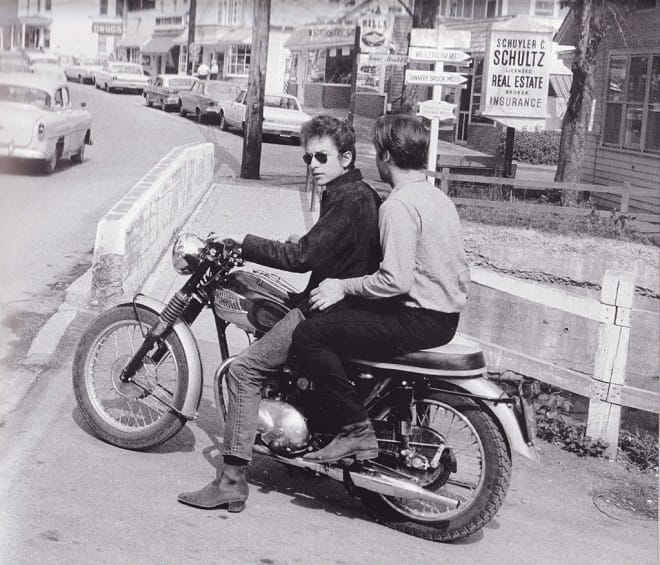 A long-time bike nut who bought his first, a Harley 45, in his teens. In 1964, after moving from Greenwich Village to Woodstock, he bought this Triumph T100 Daytona 500 which became his main form of transport. That all changed on July 29 1966 when a crash, which remains shrouded in secrecy, left him with a cracked vertebrae, forced the cancelation of an upcoming tour and led to Dylan becoming something of a recluse. In his memoir Chronicles, he wrote: “I’d been in a motorcycle accident and I'd been hurt, but I recovered. Truth was that I wanted to get out of the rat race.” It’s not known if he ever rode again. 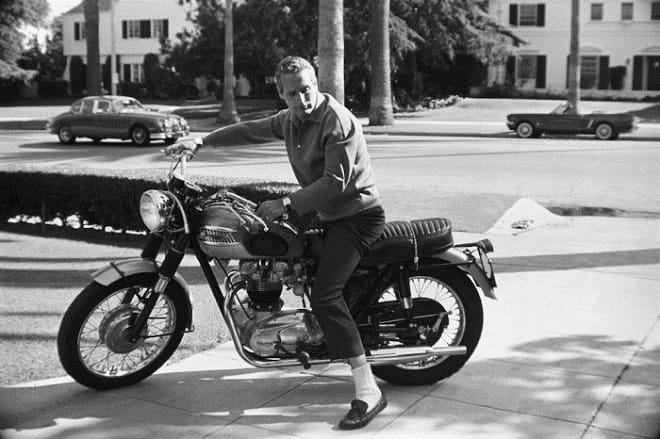 Arguably as much of a petrolhead as McQueen, although probably more focused towards cars and car racing in particular, a passion sparked through starring in Indianapolis epic ‘Winning’ in 1969 and which a hiatus through his Newman/Haas Indycar racing team from 1983-2011. But although little is reported it’s known Newman was into bikes, and particularly Triumphs, too. Rehearsals for Hitchcock’s Torn Curtain, for example, in 1965, had to be skipped, one biography records, after a bike crash left him needing skin grafts to his left hand… 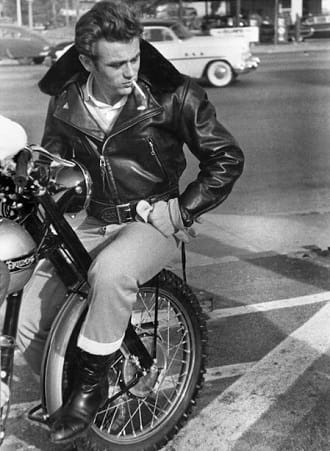 Rebel Without a Cause star and teen icon is mostly known for the fatal accident in the Porsche 550 Spyder he called ‘Little Bastard’. Less well known is he was into bikes, as well. He got his first, a CZ 125, at 15. Then, after dropping out of college to pursue acting, swapped it for a Royal Enfield 500 twin. Once, while home in Indiana on break from a play in New York, he decided to ride all the way back to the Big Apple (around 600 miles). When the Enfield broke down en-route, he promptly traded it in for an Indian. He later bought this Triumph TR5 Trophy, the last bike he rode before he died. 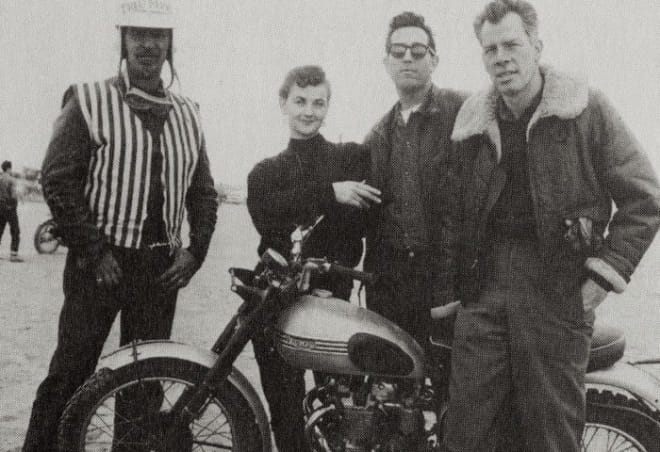 Marlon Brando may be the most celebrated ‘biker star’ of the iconic movie ‘The Wild One’, but it was actually his co-star, Lee Marvin, who played rival ‘Chino’ who was the true biker. Marvin was a lifelong two-wheeler who hooked up with equally passionate Keenan Wynn (pictured on the left here, the two starred together in ‘Point Blank’ in 1969) in LA and regularly went dirt bike racing together. Wynn was even in 1951 a guest tester (of a BMW R51/2) for American motorcycle magazine Cycle. 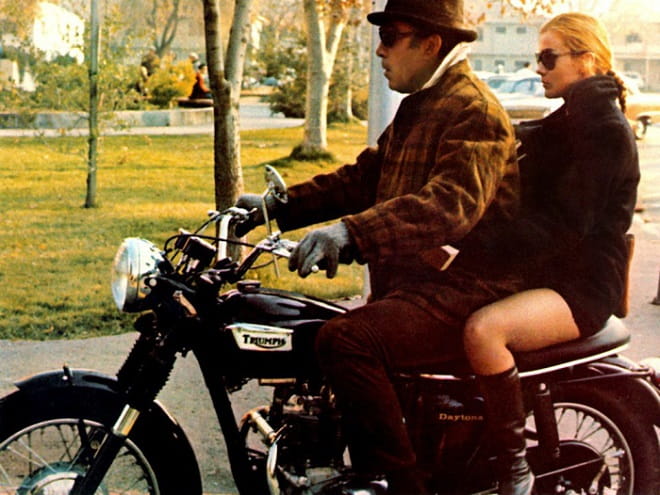 You’d be forgiven for thinking movie icon Anthony Quinn, pictured here at the controls of a Triumph 500 Daytona, was a bigger biker than his passenger, Ann-Margret. In truth, the opposite was true. Taken during the filming of ‘RPM’ in 1969 the film, like many others, adopted some of the biker/hippie culture of the hugely successful Easy Rider, hence Quinn’s character ‘Paco’ rides a Triumph and takes girlfriend ‘Rhoda’ (Ann-Margret) on the pillion. In real life, however, it was Margret who was the bike nut having two-wheelers throughout her life and starring riding a Guzzi V7 in the 1968 flick ‘The Prophet’. 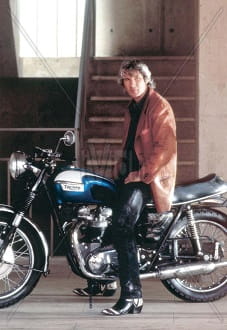 It’s well known that heartthrob Gere rode a 1978 Bonneville T140E in ‘An Officer And A Gentleman’. In fact the bike was one of the stars of the movie. Producers Paramount did a deal with Meriden (by then on its last legs) whereby two bikes were supplied by Seattle dealer Dewey’s Cycle Shop. In return Triumph were allowed to display bikes in the foyers of showing cinemas. Less well known is that Gere also rode a T120 Bonneville in the 1993 flick ‘Mr Jones’ (pictured), which can’t be a coincidence… 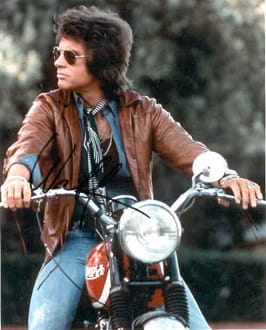 Urban legend has it that, while at university, Beatty once rode a motorcycle into his European history class, did a rendition of ‘Good Golly Miss Molly’ then rode out never to be seen again. This can’t be substantiated. What we ARE sure of, though, is that the ‘70s lothario definitely rode a 500cc Triumph Tiger 100, complete with custom paintjob, in the 1975 rom-com Shampoo, in which HE stars alongside Julie Christie and Goldie Hawn. Must admit that he doesn’t look very comfortable on it, though… 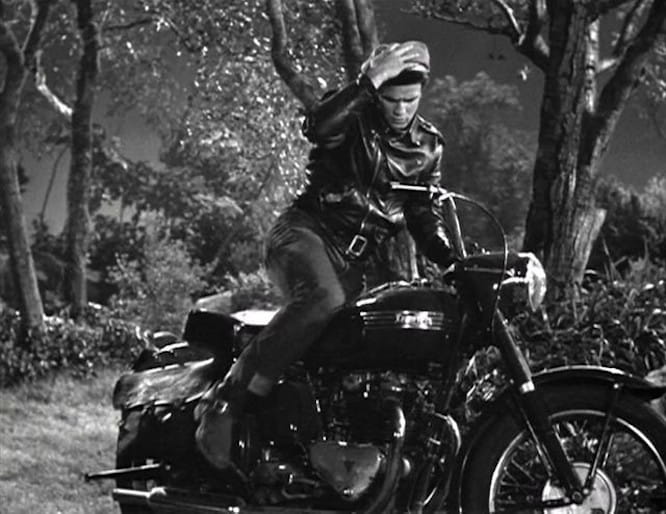 Considered one of the greatest actors of all-time, Marlon Brando’s leading role in the 1953 movie The Wild One, saw him portray Johnny Strabler, leader of the Black Rebels Motorcycle Club.

The iconic movie was X-rated in the UK and banned for 14 years. It examined motorcycle gang violence and created a legend of Triumph’s Thunderbird 6T. Despite the movie’s negative image of motorcycling, and Triumph’s initial objections to their bike being used, the film hit a chord with America’s youth and played a major part in establishing the British brand as the epitome of cool.

Even today, the image of Brando and the Thunderbird remains enduring, with Triumph even issuing a ‘Brando’ replica leather jacket a few years back.

Have you seen any superstars or celebrities on bikes?