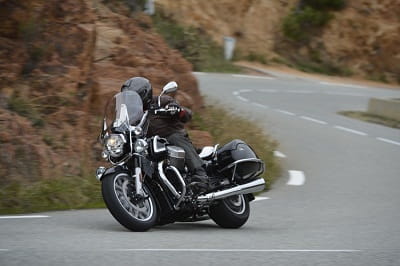 Moto Guzzi has finally renewed its best selling model of the last 40 years, the California. There are two versions, the 1400 Custom and the one I rode, the 1400 Touring.

It's the best looking California ever, with huge presence, very clean, low slung lines, clear traditional styling cues blended with cool modern touches like various LED lights, and the size of the V-twin exaggerated by the cut-outs in the fuel tank to accommodate its big air-cooled cylinders.

It feels good too. The torque peaks at just 2,750rpm, allowing the engine to thud and shake with lazy muscularity to the unique Guzzi sound and still respond powerfully to the throttle. The capacity increase to 1380cc from the old 1200 motor is thanks to bigger pistons, and to tame the vibes the engine is rubber mounted - previous ones were stressed components of the frame. 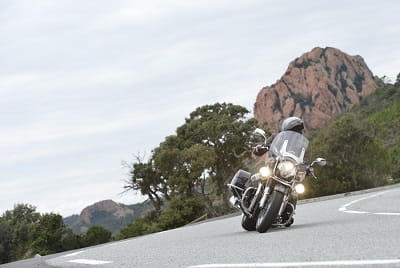 This has added some weight, but it's still at least 20kg lighter than an equivalent Harley-Davidson, and it's very smooth now at all engine speeds other than idle, when the bike shakes and rocks as you'd want it to.

It's a cruiser but it's also a touring bike, hence the decent sized panniers and screen, and it should do this job well, with one proviso. Comfort is very good, although there's some turbulence from the top of the screen above 75mph which vibrates your helmet, and the overdrive top gear makes for relaxed motorway riding, but the economy doesn't appear to be good, dropping to 30mpg around town on my ride. Guzzi claims 42mpg in everyday riding, but that seems a little optimistic, in which case the range will be only 170 miles or so, not enough for a tourer.

There's even traction control if things get slippery but most typical riders will rarely remember it's there. The three engine maps are used more, in particular it's worth switching to Pioggia (wet) for town riding as the throttle response can be too sudden in the other two modes, Turismo and Veloce. But how refreshing for a manufacturer not to default to English for this kind of thing - this is an Italian bike after all.

Quirks aside, the California's an impressive beast. It handles well, the steering is perfectly neutral and the bike changes direction with astonishing agility considering its size, making it a real pleasure on twisty mountain roads where it ought to be a handful.

Not perfect, but still seductive... 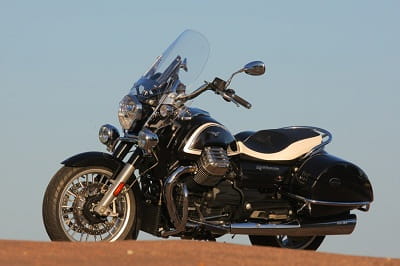