More than just a bike dealer... 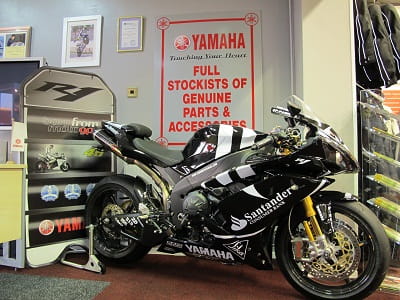 “The only members of staff who aren’t family are our three technicians, my wife Lisa is a co-director and does the clothing while my sons Ashley and Nathan both work for the business,” says Tamworth Yamaha’s owner Jonathan King. “That’s what sets us aside. We pride ourselves on our customer service, we know most customers by first name and they know us in the same way, it’s a family run business. People buy off people and our ethos is that we have to be the best we can doing what we love – being in the bike industry.”

Having been in the bike industry for 30 years, Jonathan set up Tamworth Yamaha ten years ago as a purely Yamaha franchise, a brave move considering the current economic climate.

“I’ve always been a Yamaha fan, I used to run Yamahas when I was working for multi-franchises and I race a Yamaha motocross bike so I guess it was in part a sentimental decision. Also the build quality is superb and I have a good relationship with the Yamaha UK guys. Like anything we have had some cracking years but at the moment we are going through a tough patch, however there is light on the horizon. I can’t say much, but the 2014 range means that will be a big year for us. Running a dealership is like a marriage, you have to work at it and there are bad times as well as good but we’re in it for the long run.” 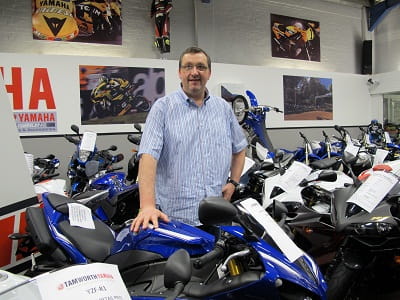 Looking around the Tamworth shop you can miss the whole team’s passion for motorcycles. As well as huge Yamaha posters on the wall there are some very special touches that are down to Jonathan and his eye for collecting memorabilia…

“The thing that kicked it off was when we helped Billy McConnell in the R6 Cup,” remembers Jonathan. “He was over from Australia and came into the shop because we stock Spidi leathers who were sponsoring him. Anyway, Billy asked if he could do a few days a week working for us to stop him getting bored. One thing led to another and after he had a few sponsor issues Billy ended up living with us for two years! We sponsored him and he won the 2005 title with our name on his leathers, which is why we have them on one wall. That inspired me to start collecting and it spiraled from there.”

By spiraled, what Jonathan actually means is he has created a mini-museum with leathers from Cal Crutchlow (who Lisa helped get a Spidi deal), Leon Camier, James Ellison and even, randomly enough, Andrea Dovizioso! 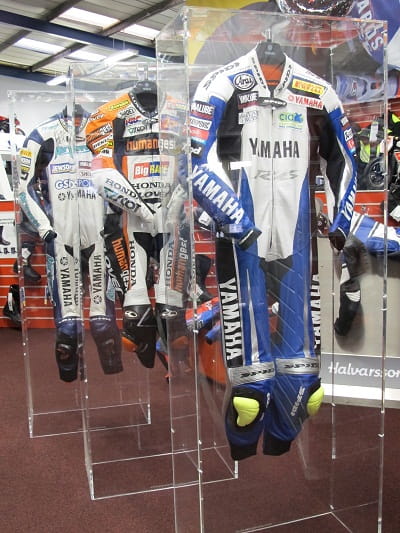 “We had Colin Edwards at the store in 2008 and we helped a friend of Colin’s out with some leathers and he turned out to be best friends with Dovi,” said Jonathan. “He is sending us a set of Yamaha leathers soon.”

In another room of the store there is a ‘Rossi shrine’ with various signed bits and bobs as well as a Jorge Lorenzo ‘spaceman’ helmet. However if you are a bike nut then the real treasures can be seen above the workshop.

Jonathan keeps his special Yamaha models on a ledge for all to see. Alongside a 13-mile red/white 1998 R1 stands a 0-mile 2002 R1 (the first fuel injected model). 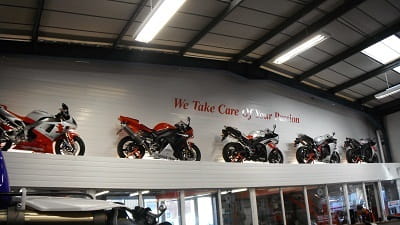 There aren’t many dealerships in the UK with such a collection of iconic motorcycles and memorabilia, not to mention a pool table in the showroom, so if you are in the Tamworth area pop in and say hello to the King family – a true family dealership.