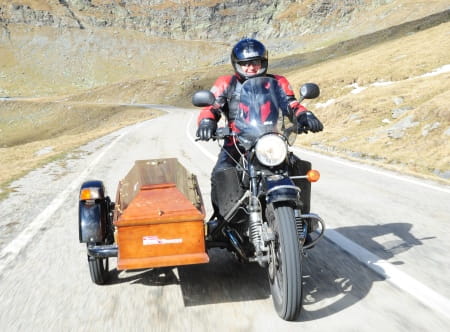 As you may know, Nick Cunningham’s Halloween-themed Bennetts Biking Dream recently came true as he rode through Transylvania dressed as Dracula on a motorcycle with a coffin sidecar (pictured).  This peculiar dream intrigued us at Bike Social and of all the questions that pop into your head while reading about Nick’s adventures in Transylvania, the one we’ve chosen to look into is “What on earth was he riding?”

The answer is a Ural Ranger, obviously modified a little for the coffin... Ural – a Russian brand – has a fascinating history dating back to the Second World War. Wanting to be as prepared as possible for a Nazi invasion, the Soviet Union decided to come up with a motorcycle that would be most suitable for the Red Army.

Official accounts suggest the base for this motorcycle was to be the BMW R71 and five units were purchased through some Swedish intermediaries. Soviet engineers took these bikes and reverse engineers the BMW design in every detail in order to produce their own engines and gearboxes in Moscow. After receiving Stalin’s approval, the motorcycle, named the M-72 entered mass production. A factory was set up in Moscow and began producing the M-72 although Soviet strategists became worried it would become an easy target for Nazi bombers, therefore it was decided to move the factory further east, out of bombing range into the Ural mountain region. In During the war, almost ten thousand motorcycles were delivered for reconnaissance detachments and mobile troops. By 1950, well after the war, the factory had expended and had produced in excess of 30,000 motorcycles.

Until the fifties, URAL motorcycles were only available for military use but this soon changed with the factory producing more and more bikes for non-military use. In 1953 the export history of URAL began, mainly to developing countries. In the seventies, Ural was one of the makes marketed in the United Kingdom as Cossack Motorcycles.

Ural do now source many components pre-made, such as Brembo brakes but the company still make the frame, the engine and the body parts. The motorcycles are mainly exported to Australia, the United Kingdom, France, Netherlands, Belgium, Spain, Greece, Norway, Finland, Iceland, Sweden, Germany, Egypt, Iran, South Africa, Brazil, Uruguay, Paraguay, and the United States. The total number of sales since the factory was founded has been over 3.2 million. IMZ-Ural is the only Russian manufacturer of large capacity motorcycles and one of few manufacturers of sidecar motorcycles in the world.