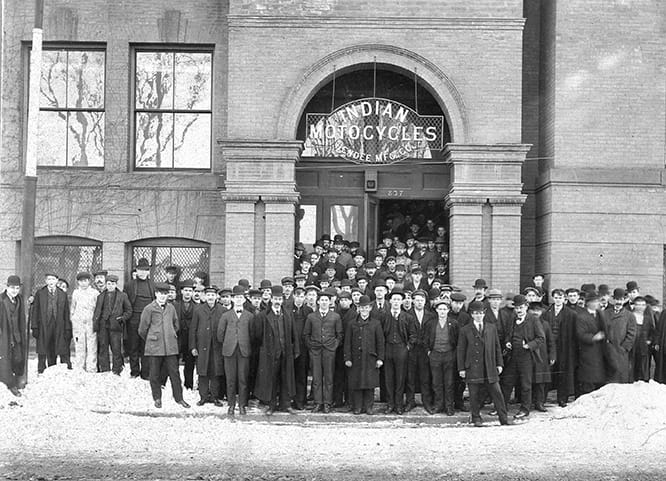 With Indian’s new ‘bagger’ being called the Springfield, after the town in Massachusetts, USA, where the first Indian motorcycles were built in 1901, we thought now as good a time as any to explore some of the other stories behind the names of the world’s most famous motorcycles.

Indian, incidentally, wasn’t the American company’s first name. Instead, former bicycle racer George M. Hendee founded, in 1897, the Hendee Manufacturing Company to make bicycles including the Silver King, Silver Queen and American Indian, the latter of which was later shortened to become the company’s main brand name. In 1901 the first motorized versions were produced in a new factory in Worthington Street… 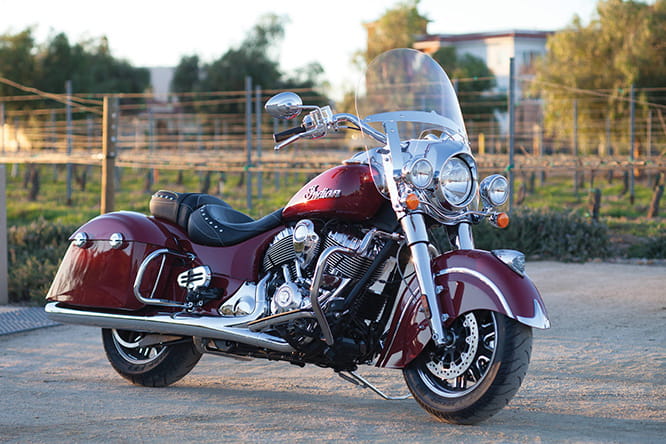 Although Thunderbird is a name still used by Triumph on its 1700cc cruisers and before that was applied by the Hinckley marque to the 1995 retro roadster based on its 885cc Trident triple, the name actually dates back to 1949 when it was applied to old Meriden Triumph’s new, over-bored, 650cc version of the 500cc Speed Twin which was aimed primarily at the American market. 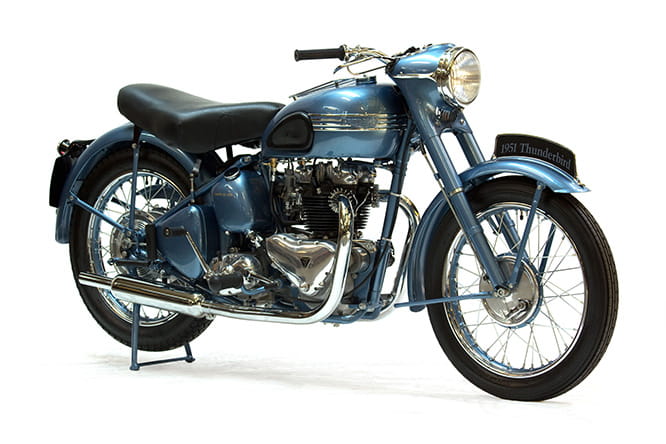 It was a huge success, too, being ridden by Marlon Brando in ‘The Wild One’ in 1953 and surviving as the firm’s flagship model throughout the ‘50s. And the name? Legend has it Triumph supremo Edward Turner was travelling back from Daytona to New York in the spring of 1949 when he chanced upon the Thunderbird Inn in South Carolina… It’s still there today. 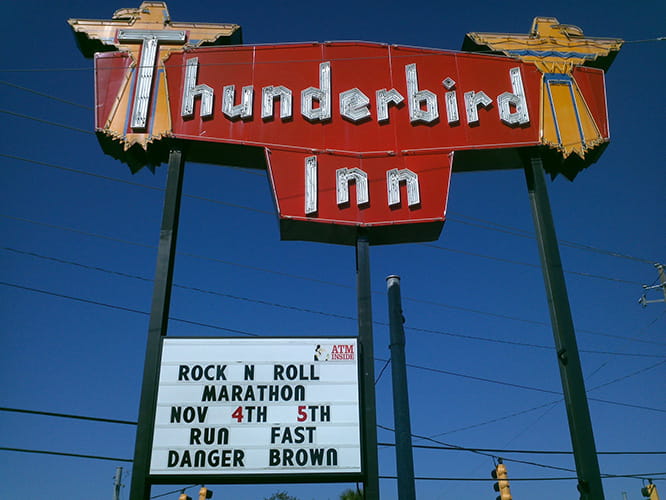 One of the most famous British – if not world – motorcycles of all time is surely the BSA Gold Star. Built from 1938 to 1963 they were a range of high performance single-cylinder four-strokes produced in both 350 and 500cc forms and used in everything from road racing to trails and scrambles. Today they’re among the most desirable and valuable British classics of all. 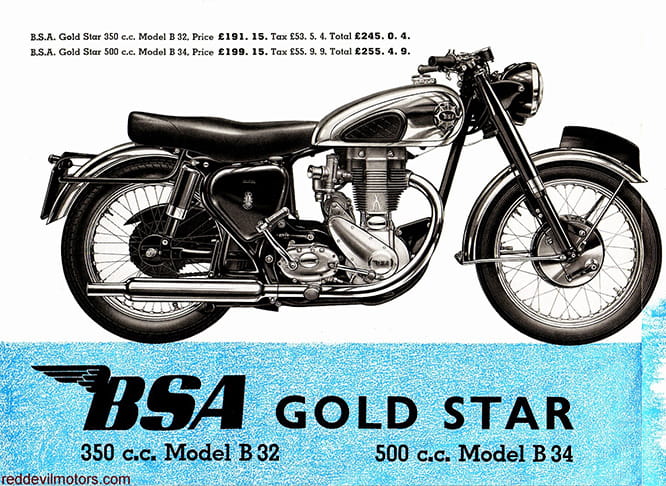 Their catalyst – and name – comes from 1937 when racer Wal Handley lapped the Brooklands circuit in Weybridge aboard a BSA Empire Star 499cc single (itself derived from the BSA Blue Star) at an average of over 100mph and was awarded the traditional ‘Gold Star pin’ for the feat. This inspired BSA’s production of a modified version, dubbed the ‘Gold Star’ the following year which proved so successful a series of derivatives, many hand-built with top spec components and options, continued to be produced up to 1963. 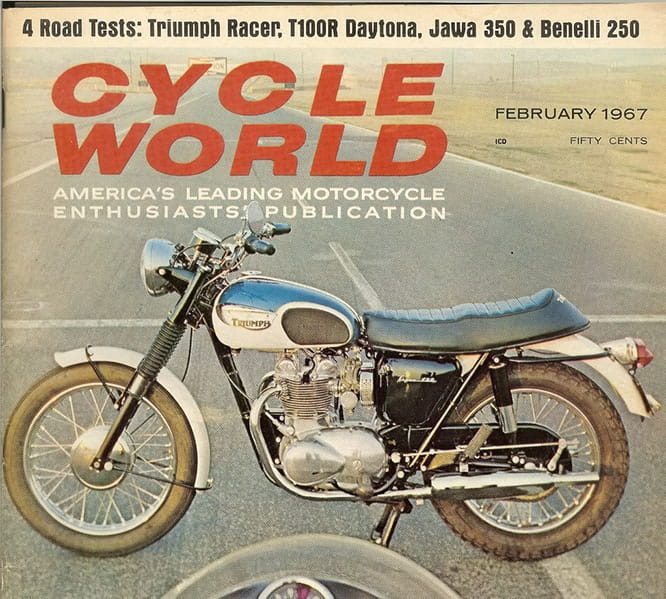 Most people know the Triumph Bonneville is named after Johnny’s Allen’s record breaking land speed run aboard the ‘Texas Cee-gar’ streamliner in 1956 which was powered by a pair of twin carb-ed, 650cc Triumph Thunderbird engines. But the story behind the British marque’s use of the name Daytona on its sportsters is just as evocative. In 1966 American racer Buddy Elmore won the Daytona 200 – Triumph’s first – aboard a factory-tuned version of the 500cc Triumph Tiger 100 which featured a different head, twin carbs and more – effectively it was a ‘junior’ Bonneville.

The following year, 1967, a production, road version was released using, naturally enough, the Daytona name. It repeated its Daytona win the same year, this time in the hands of Gary Nixon. 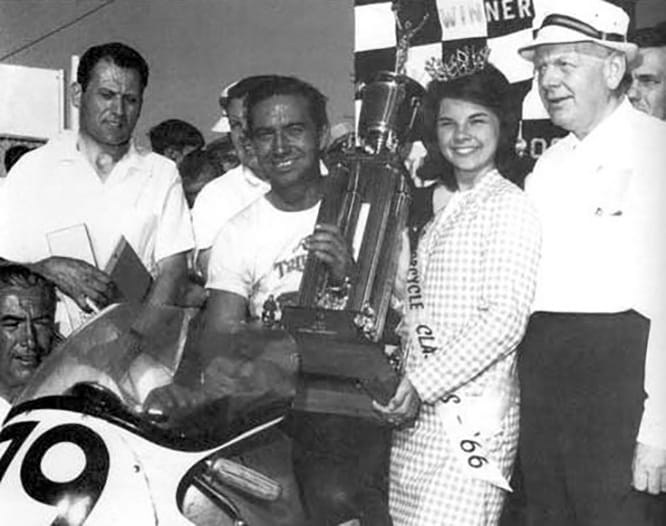 Triumph and BSA aren’t the only classic British motorcycle manufacturers with a long tradition of evocative model names. Norton, too, founded in 1898 by James Lansdowne ‘Pa’ Norton, originally as a manufacturer of ‘fittings and parts for the two-wheel trade’ and producing motorcycles from 1902, has more than its fair share, as well. Although the Commando remains its most famous model, its predecessors arguably have even more interesting histories. The 1958 Jubilee, for example, was named to celebrate the diamond (60th) anniversary of the company. 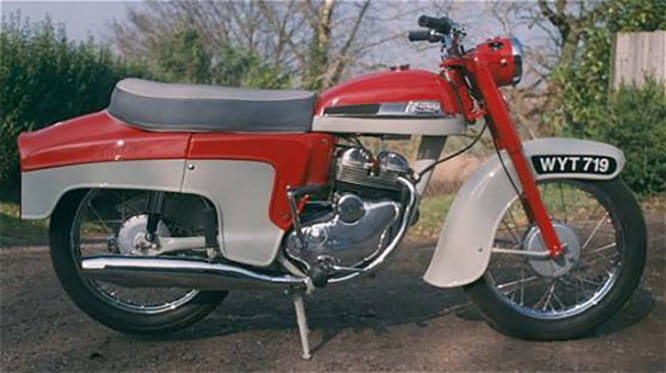 Famously the machine that not just saved Ducati in the early 1990s but also helped spawn the whole fashion for the ‘super naked’, the Italian roadster twin very nearly didn’t exist at all – and certainly not with the name we’re so familiar with today. It was the pet project of young Argentinean designer Miguel Galuzzi, then working for Ducati owners Cagiva, and the result of a desire to build a very ‘pure’ machine. “All a bike needs is a saddle, engine, two wheels, handlebars and a tank to fill with fuel…” he’s famously reported as saying. His boss, Massimo Bordi, steered Galuzzi towards an aggressive look inspired by Marlon Brando in ‘The Wild One’ while economic constraints forced a ‘parts-bin’ approach and, ultimately, an 851 frame, 900SS engine and 750SS front end. Originally destined to be a Cagiva rather than Ducati until a last minute change of heart, the ‘Il Mostro’ name, meanwhile, later translated into English, was factory nickname for the project that stuck. 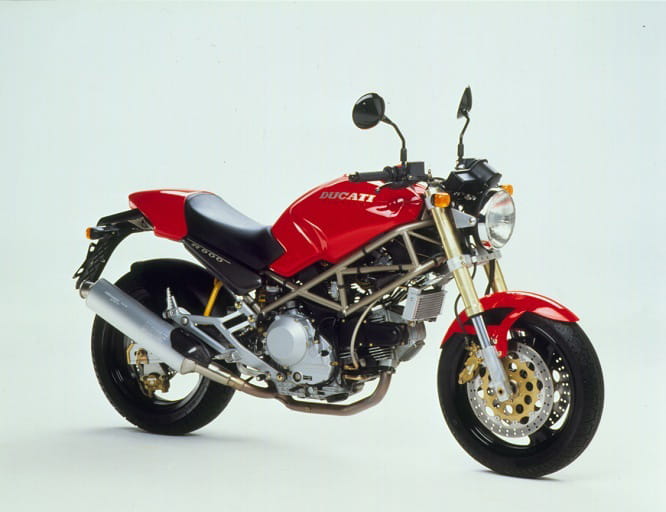 Historic Italian marque Moto Guzzi, which this year celebrates its 95th anniversary, has a long history of evocative model names, not just with the recently revived California cruiser but with machines like the Le Mans, Monza and more. But perhaps the most evocative of all is that of the ‘Norge’ tourer. It was taken from that of the original GT ‘Norge’ model of 1928, the world’s first motorcycle with swinging arm rear suspension and a feature Guzzi decided to demonstrate by taking a 4000-mile test ride from the factory in Italy to Nordkapp in Norway, just inside the Arctic Circle. The ‘Norge’ name stuck, and was revived in 2005 on the modern 1200cc tourer. 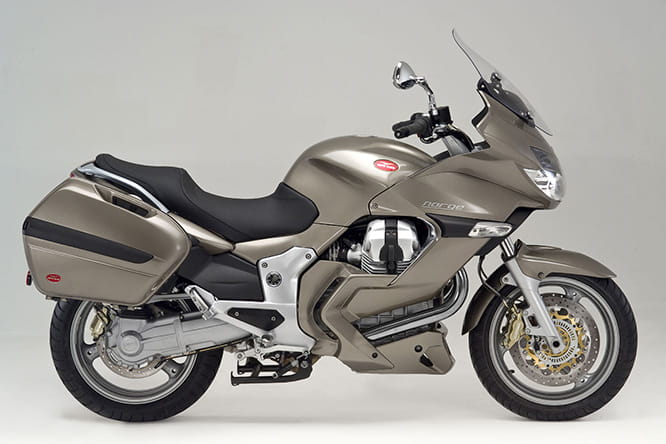 Few bikes have as chequered a history as the Ducati Paso. In many ways the strikingly-styled 750 sports tourer is one the Italian marque’s most significant models of all: intended, by new owners Cagiva, as a range-topping ‘marquee’ machine it was designed by the legendary Massimo Tamburini and bristled with high quality components. 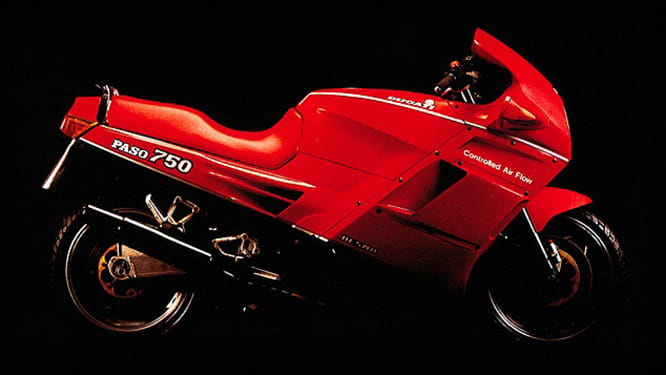 Its name, meanwhile, was no less grand and was in honour of popular Italian racer Renzo ‘Paso’ Pasolini who died at Monza in the 1973 Italian GP. Unfortunately, however, it wasn’t a success due to a combination of high price, underwhelming performance and a few reliability issues. An update into the Paso 906 came in 1989, followed by the 907IE in 1991 (which dropped the Paso name completely) but, despite decent performance, sales were still slow and production ceased in 1992. 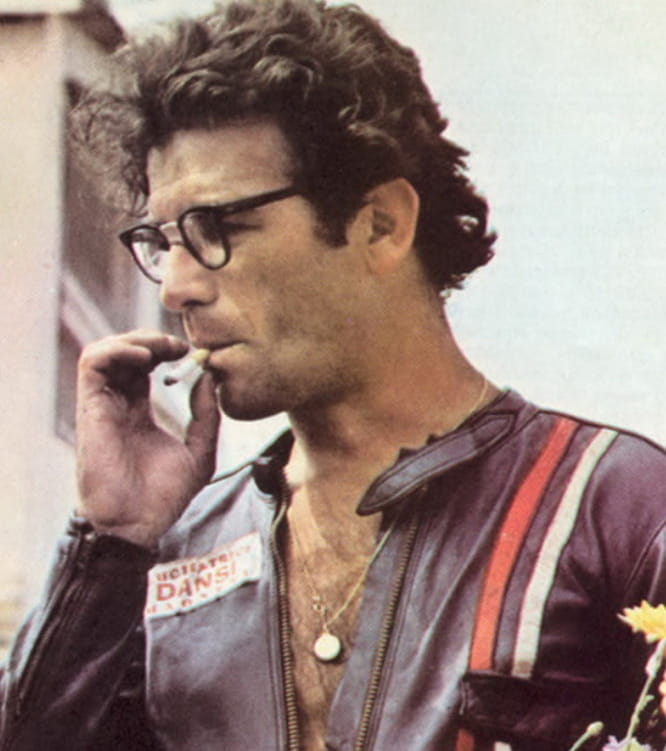 Launched originally way back in 1965, the Harley ElectraGlide remains not only the definitive ‘full-dress’ American tourer, as defined by its lazy V-twin engine and sumptuous comfort courtesy of a full touring fairing, panniers and topbox, but also arguably THE most famous model name in motorcycling. In truth, however, ‘ElectraGlide’ was merely the latest variant of a model name that dated back to 1949. That bike was Harley’s ‘HydraGlide’, a ‘Panhead’ V-twin-powered cruiser developed from the 1941 Harley FL which was given the evocative new name (the first Harley to have a name rather than lettered designation) to reflect its new hydraulically-damped telescopic front forks in place of the previous leading-link units. In 1958, when it got new rear suspension to match comprising a twin-shock swinging arm, it was renamed ‘DuoGlide’ to match. In 1965 it then received an electric starter and the rest, as they say, is history… (The ‘Batwing’ fairing, incidentally, didn’t come until 1969). 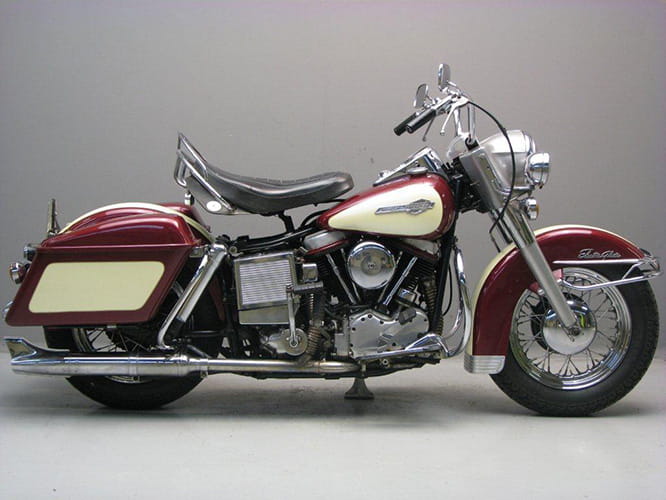 The legendary Italian ‘70s superbike, which was produced from 1976 through to 1982, has an interesting story in its own right. Based on the Laverda 3C triple, British importer Slater Bros of Herefordshire suggested an uprated version using racing parts fitted by the factory – enough to produce 90bhp from the 1000cc engine making the Jota the fastest production motorcycle of its day. The name, meanwhile is that of a Spanish dance in, appropriately enough, triple time… 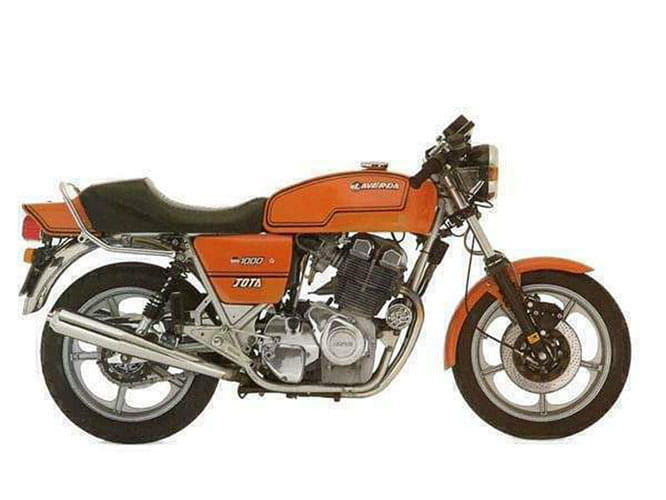 Got any others?  or