Scooters may still not be for everyone, but with an ever-widening choice, increasing sophistication and performance, improving comfort and even luxury, that day may one day come. And in no sector of scootering is there now, even more choice and variety than in ‘mid-scoots’.

As the name implies, ‘mid-scoots’ are middle-range offerings between the traditional, small-capacity (but limited ability) 50 and 125cc machines you can ride on L plates at 16 or 17 years of age, and the full-bore, big capacity, luxury ‘maxi’ or ‘super’ scoots. The latter, with capacities of up to 800cc, price tags sometimes in excess of £10,000, more luxuries, gadgets and bulk than many full-size touring motorcycles and their sometime requirement for full motorcycle licences can put them out of reach of those a more long-legged scooter – hence the growing appeal of ‘mid’ sized ones.

‘Midi’ scooters, therefore, are usually machines of between 250 and 500cc, easily capable of cruising at motorway speeds and yet are also A2 licence compatible, are not too big as to be intimidating or awkward yet are still roomy enough for two with plenty of comfort as well – the best of both worlds in fact. No wonder they’re becoming so popular.

At the same time, however, there’s no more varied examples to choose from than ever, ranging from retro-styled urban runarounds to hi-tech, leaning three-wheelers; and from premium brands such as BMW to new brands from south-east Asia such as Kymco. To help you choose – here’s our pick of the 10 best mid-scoots. 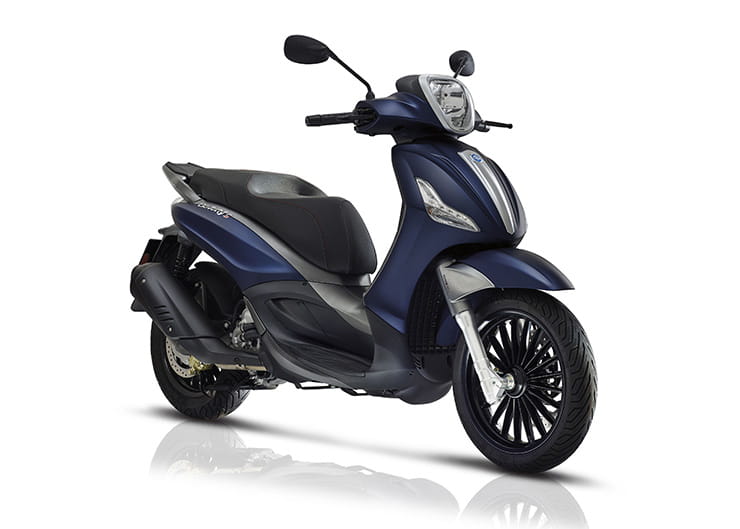 Launched in 2001 and updated in 2017, the Beverley (ignore the name for a moment) is the Italian scooter specialists’ medium-engined, larger-wheeled scoot. Aimed more at female riders (hence the name), its stylish, an adequate performer thanks to its 278cc single cylinder motor producing 21bhp, offers secure and stable handling thanks to its larger wheels and yet is well-equipped, comfortable and with the usual classy detail touches we’ve come to expect from Piaggio as well. On top of all that it’s easy to ride and has space for the usual two (small) helmets under the seat and has a USB port.

In 2017 it received updated LED lights and a new LCD dash while that year it was also joined by an addition variant, the Sport Touring 350 ABS version for £4999, which boasts a larger, 330cc, 30bho engine, stylish new black wheels and extended top fairing or screen to aid longer distance comfort. 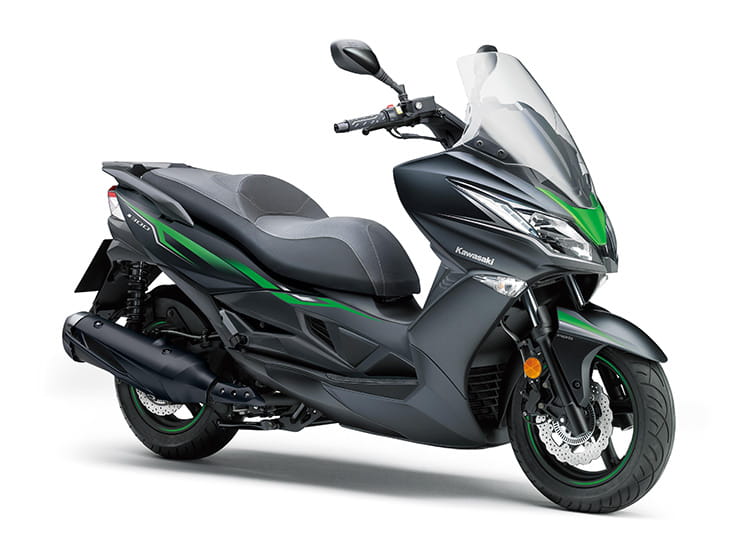 OK, we all know by now that Kawasaki’s scooters (they also offered a 125 version until recently) are basically restyled/rebadged Kymcos, in the 300’s case being a ‘green’ version of the Taiwanese manufacturer’s Downtown, but that’s no reason in itself to put you off. Introduced in 2014, the J300 is actually a decent, affordable all-rounder ‘midi’ scoot. The 27bhp single is perfectly adequate and will cruise at 80mph with little complaint; the chassis is a good mix of comfort and nimble handling and there’s a lockable glovebox, storage space under the seat for one decent helmet and a 12v socket, too. On the downside, yes, it’s adequate, but it doesn’t particularly impress in any way, either. That said, at a fairly tempting price, with good looks, adequate ability and a price far more tempting to some than, say, Kymco or Piaggio, maybe that’s enough… 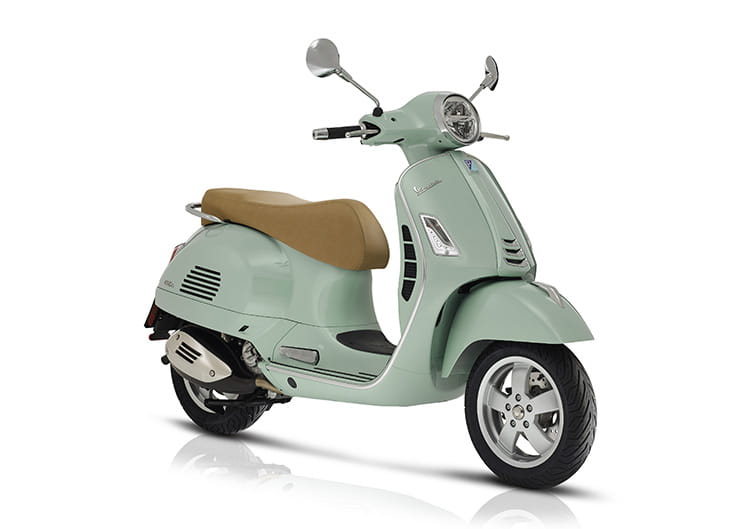 If you ask most laymen to ‘think scooter’, the machine they’ll come up with is the classic, Italian-styled Vespa – and this popular, stylish, best-seller has been improved again for 2019.

Originally introduced in 1946 by Piaggio, updated successively ever since, a ‘Mod’ style icon in the 1960s and today, with its retro-styling first introduced in 2004 as the GT but with classy, lavish quality, that’s hugely appealing to urban ‘fashionistas’, it remains a benchmark machine. Now available in both 125 and 300cc forms, the cute GTS has been updated further for 2019 with slicker-still styling, improved riding position, new colour TFT screen instruments and, most significantly of all, an uprated ‘HPE’ (High Performance Engine” motor with impressive increases in both power and torque making it the most powerful Vespa ever. It’s available in a variety of style and trim options, is a small and light enough to be a doddle to ride, is über cool and decently practical. On the slight downside, it’s pricey, its storage space is smaller than some, it’s smaller wheels and proportions make it less adept over distance (although it’s great around town) and its 24bhp is still not much to get excited about. But if it comes down to style, there’s none better. 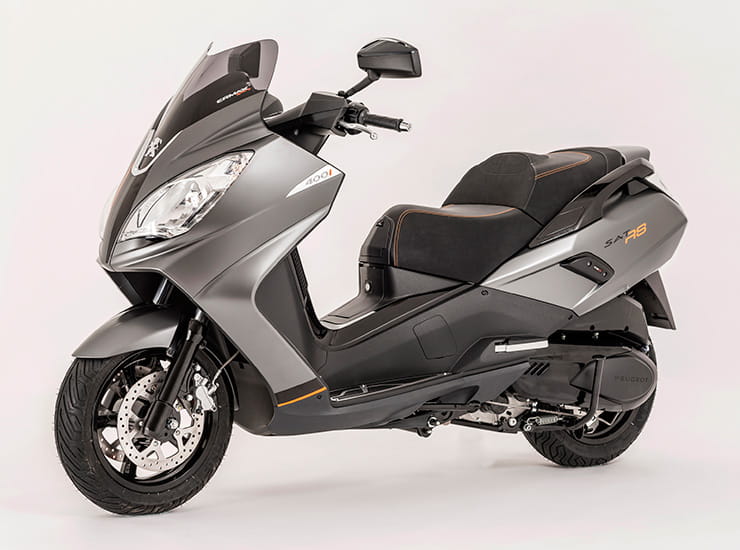 French scooter specialists Peugeot (although now 51% owned by Indian manufacturer Mahindra) have long had a good reputation for two-wheels, dating back to its first motorcycle in 1901 while in the 1970s and ‘80s its mopeds were hugely popular. The maxi-scooter Satelis was first introduced as 125 in 2006 before being reinvented as the Satelis 2 400 in 2015. Today it remains its largest two-wheeled scooter (they also produce the 500cc, three-wheeler Metropolis) and remains one of the most versatile and affordable. Its 36bhp single-cylinder motor is punchy enough, it’s nimble and reasonable handling and it’s comfortable, too. But on the slight downside, as you might expect from its price and age, its spec now lags behind some rivals, too. 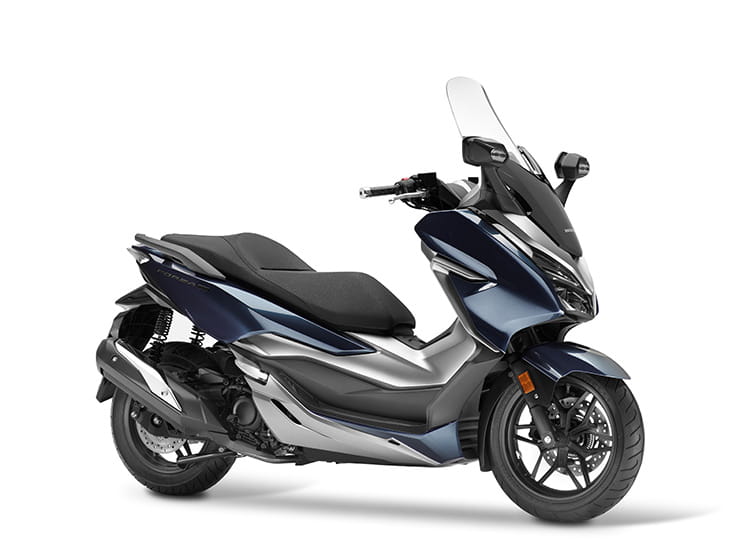 The Forza 300 is pretty much the benchmark ‘midi-scooter’ and has been a Europe-wide best seller for4 years – and with good reason. Better still it received a significant makeover in 2018. An all-new, tubular steel frame means it’s now a little lighter, shorter and with a more ‘forward’ riding position, the Forza is sportier than ever but also more nimble and easier to manage. The familiar, SOHC, 279cc engine produces a healthy 25bhp but now features ‘HSTC’ (Honda Selectable Torque Control) a kind of traction control, plus there’s now uprated styling, full LED lighting throughout, a useful, electrically adjustable screen and a stylish new digital/analogue instrument display. To ride, as before, it’s a great mix of sportiness and practicality, has all the functions and space you need, quality is typically Honda – brilliant – and it’s easy to ride as well – no wonder it’s so popular. 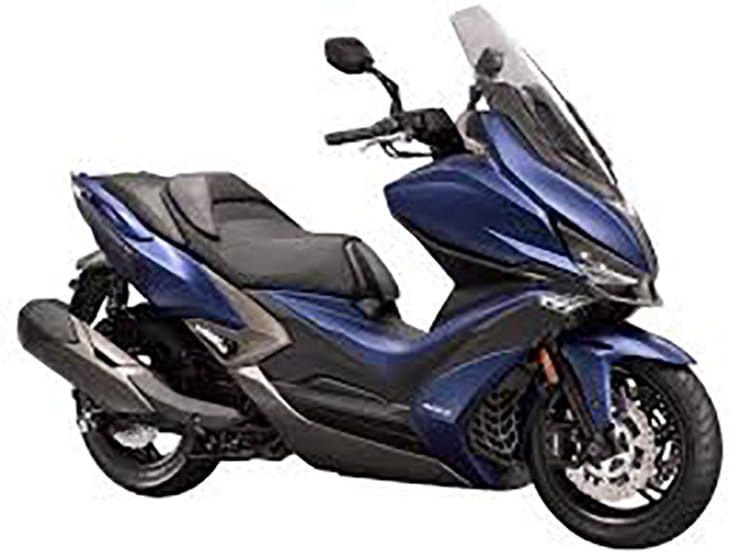 Rising Taiwanese brand Kymco are carving out a decent reputation as a scooter and small machine manufacturer and its uprated-for-2019 XCiting kid-range machine is one of its best. An improved version of the old touring/commuting XCiting 400, the S now comes with sharper looks, LED lights and clever Bluetooth phone connectivity that displays satnav functions directly on its dashboard. On top of that there’s an adjustable screen, parking brake, luxury seat including rider backrest, adjustable suspension and plenty of luggage space including two glove boxes and a large underseat space. It’s larger and more ‘maxi’ than most of the machines here but its 400cc single cylinder motor produces a decent 35bhp, comfort is great, handling decent and quality and equipment good, too. It might seem a little pricey for a ‘midi’ scoot, but compared to the larger ‘maxi’ scoots most of its spec and ability is closest to, it’s something of a bargain. 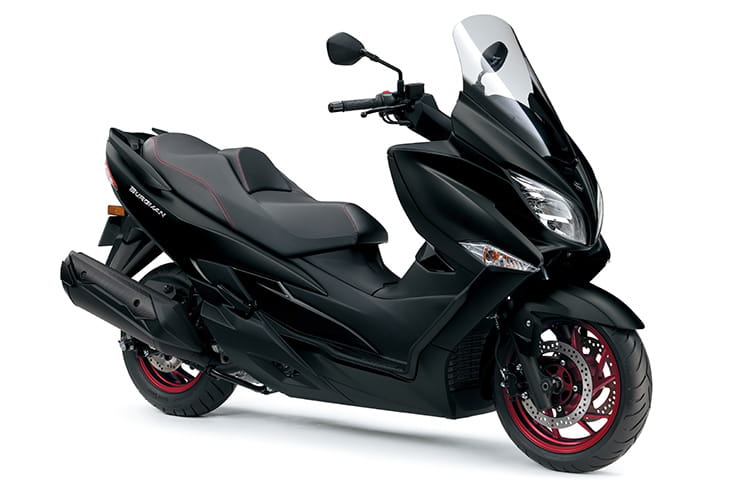 Suzuki top-of the range Burgman 650 has long been considered by many as the ultimate maxi scooter due to its substantial size, virtually unrivalled luxury and comfort and big, motorway-consuming 54bhp performance. But that also means the now £9199 machine is only an option to those with a full category A licence – which is where the ‘midi’, 30bhp and under £6500 400 version comes in. Admittedly slightly less plush, substantial and luxurious than the 650, Suzuki’s 400 is still a classy, long-distance option, arguably more practical (as it’s also more manageable) and a respectable performer thanks to its DOHC four-valve engine as well. There’s plenty of storage space under the seat, a decent dash and a 12v socket to keep your phone charged under the seat as well. 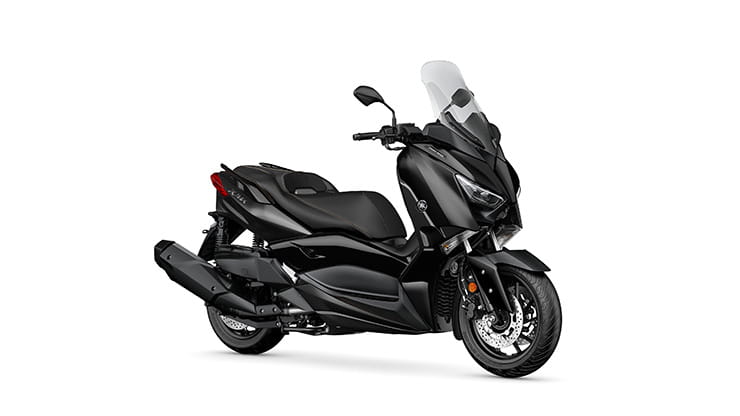 Yamaha pretty much invented the sports maxi scooter with its first TMAX 500 in 2001 but, now 530cc and £9999 It’s beyond our scope here. Its smaller bother, though, the XMAX, has grown to become a viable, smaller, more affordable option. Available as a 250 from 2009, the 400cc version was introduced in 2015 before being significantly updated in 2017. While this premium finis ‘Iron Max’ version is new for 2019.

The XMAX’s dohc, 395cc single cylinder engine produces 33bhp which, although not quite the 45bhp of the twin-cylinder TMAX is still decent, there’s twin front discs, good handling, plenty of practicality and this new ‘Iron Max’ trim means it comes in an exclusive ‘Sword Grey’ paint scheme with a luxurious dual seat, leather interior pads and aluminium footrests. And when you consider you get all that for £3500 less than the TMAX, it’s tempting indeed. 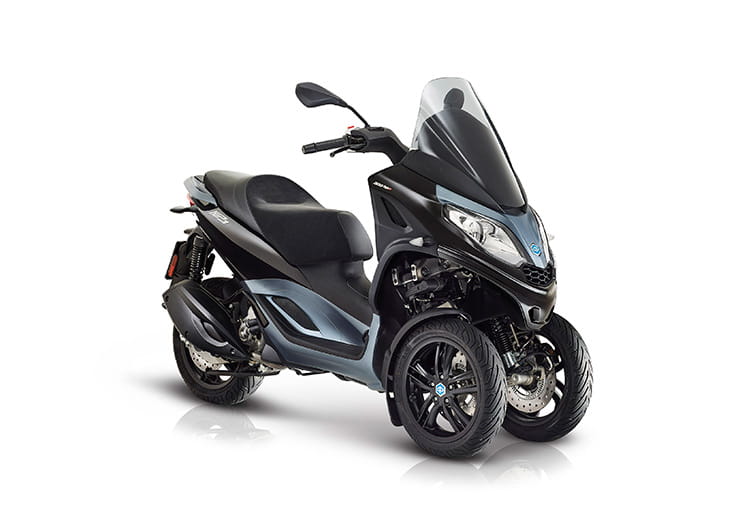 Piaggio’s radical, if not revolutionary, ‘leaning three-wheeled’ scooter has set the bar in this oddball class ever since it was first launched in 2007 and, thanks to impressive sales, constant updates and a wide model range of models varying from 125 to 500cc, the MP3’s retained its leadership in the category ever since. (For those that don’t know, the leaning twin front wheels offer incredible extra security and grip, which is particularly welcomed in slippery or poor-surfaced city streets and can also be ridden on just a car licence, the downside is extra width, complexity, weight and price).

The big news for 2019 is that it’s mid-range 300cc version, like the Vespa GTS300, now gets the new, higher performance, 26bhp ‘HPE’ engine while other updates this year include: new LED lights, revised styling, new TFT instrument display (again like the Vespa) and improved ergonomics. Not cheap, but for proven, three-wheel security, there’s none better… 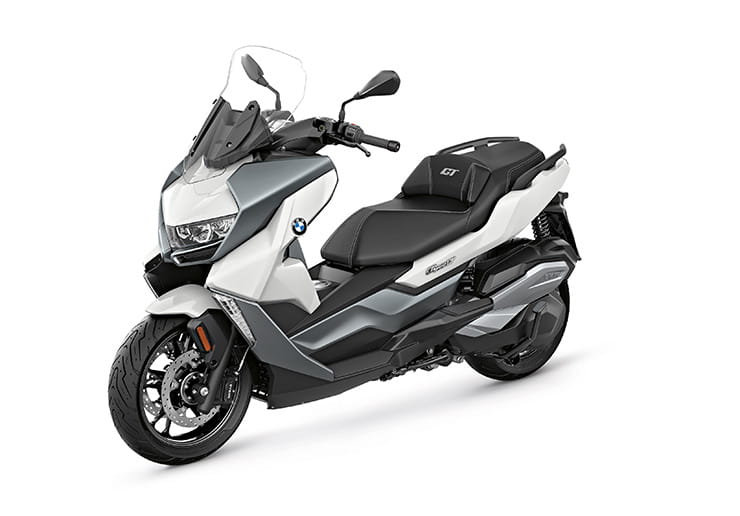 Also new for 2019, the GT was unveiled last November and is based upon BMW’s earlier C 400 X but is intended as more touring, long-distance machine compared to the minimal urban chic of the X. As such it uses the same 350cc, single cylinder engine producing a healthy but still A2-compliant 34bhp but has all-new bodywork designed for added comfort, weather protection and luggage capacity. As such, while the X’s storage space was a little limited, the GT gets two glove boxes and an under seat ‘flex-case’ capable of absorbing two helmets and also neat touches like ‘on-trend’ LED headlights with a daytime riding mode, ABS and keyless ignition. And if all that’s not enough, for an extra 1000, an SE version also gets a heated seat, heated grips and full multimedia connectivity with its TFT display. Not the cheapest, naturally, but the new BMW is effective and classy.