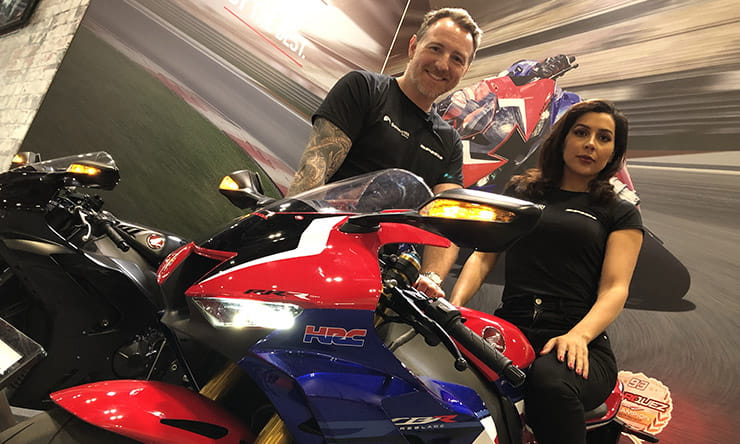 With a whopping 97 bikes either upgraded or introduced as new for this model year, there are plenty of options for those keen on a new bike. Over the last month, you’ve been voting for your favourite new bikes of 2020 and, at the risk of sounding like Ant, Dec or Dermot, now that those votes have been counted and verified, our special guest, Instagram blogger, _RubyRides_ and I scooted to The London Motorcycle Show to take a look around each of them… 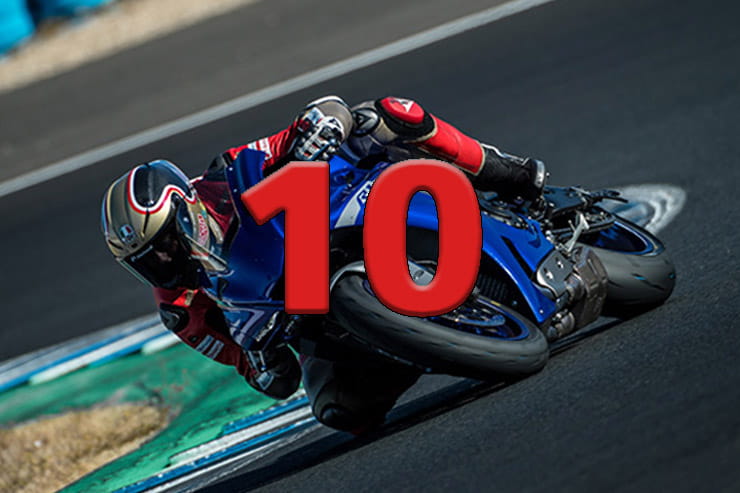 In at number 10 is the beautiful Yamaha YZF-R1. It’s been updated to comply with Euro 5 emission regulations which has meant plenty of work to the engine to make it cleaner and more efficient but Yamaha has managed that without any loss to its peak power figure which is still up there at 197bhp @ 13,500rpm.

The R1 and R1M were the first 2020 models to be announced and released. Yamaha told the world about them back in the summer and I then got to ride them at the press launch at Jerez in September. It’s typical Yamaha characteristics shone through; easy to ride, it’s flatteringly fast, quick to turn and with a very compliant chassis. The updates to the engine thankfully didn’t affect the gorgeous crossplane crank feel and noise either. It’ll do well in BSB this year, I’m sure.

Other than the engine where intake and the cylinder head are among the upgrades, the electronics have been improved and so has the suspension. And, almost every panel of bodywork has been changed. 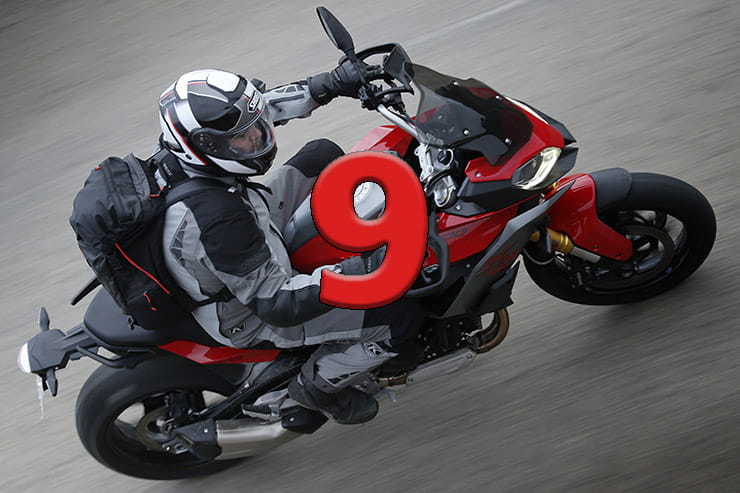 According to your votes, the ninth most popular bike is the BMW F900XR which has a new engine platform that has been used in two models; the F900R and F900XR. The XR is the taller and more touring focussed bike. Its parallel twin cylinder that makes 103bhp at 8500rpm.

Prices start at £9825 but the TE model comes with a host of electronic extras like cruise control and heated grips, and that’s another £900 on top. It’s got some competition in this pretty fierce adventure touring market. You could easily slot it alongside Yamaha’s Tracer 900, the new Triumph Tiger 900 and Suzuki VStrom 1050.

My colleague John went on the press launch and called it “brilliant”, and “one of the most easy to recommend motorcycles that I’ve ridden in a long time”. 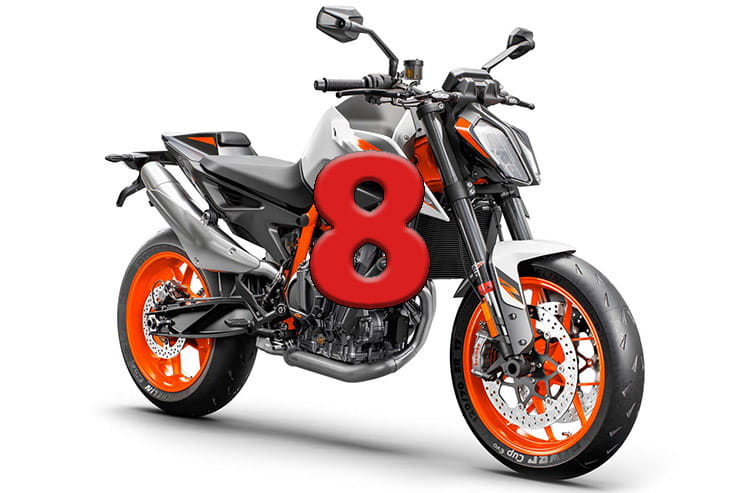 In at eight, it’s the KTM 890 DUKE R. The Austrian firm called the 790 DUKE, ‘The Scalpel’ when it was unveiled a couple of years ago, so this version is ‘The Super Scalpel’ – alluding to its razor-sharp handling.

This Euro 5 friendly naked middle weight makes more power and torque from its parallel twin motor; a very strong 119bhp, which is 16bhp more than the 790 and even more poignant given that the 890 is 3kg lighter than the 790. It also comes with better brakes, with the recently fashionable Brembo Stylema, plus fully-adjustable WP suspension.

At £10,399, and with its slick styling and popularity of the 790 DUKE, this one could be a dark horse as a serious top 10 sales chart competitor. 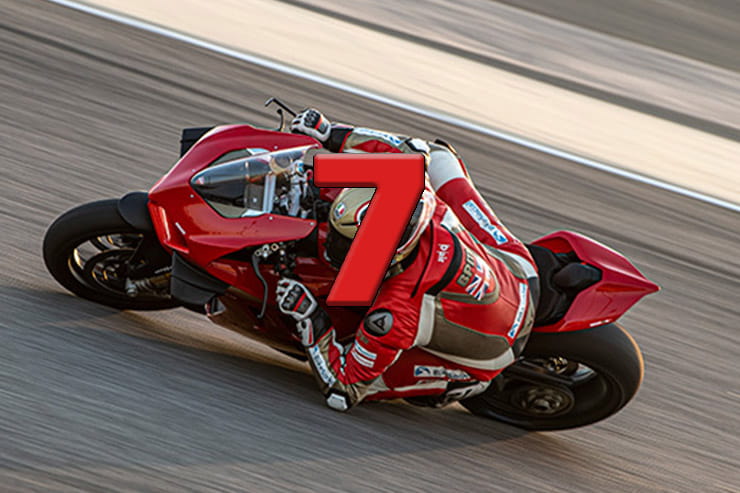 Ducati’s Panigale V4S comes in number seven, and the Italian’s know how to make a good looker. This updated Panigale uses the same 1103cc V4 engine that was introduced in 2018 but for 2020 the bike gets a host of upgrades, most notably with the addition of the wings to bring its appearance closer in line with the 1000cc V4R – homolgated for BSB and WSB.

The overall objective was to make the bike faster by enhancing performance but being easier to ride therefore opening it up to more customers. The aerodynamics have changed around the front and side fairings while the front frame is now the same as the V4R’s. The quickshifter and traction control have been improved, the centre of gravity is higher and the engine mapping has been revised.

There’s a standard version of the 2020 Ducati Panigale V4 available at a shade under £20,000 while the ‘S’ is a lofty £24,795. I got to ride it recently in Bahrain; it’s assertive and so powerful but graceful at the same time, it feels less violent than yet the Panigale-essence hasn’t been taken away. It definitely is easier to ride and the electronic options are plentiful so it’ll make riders of any capability look good. 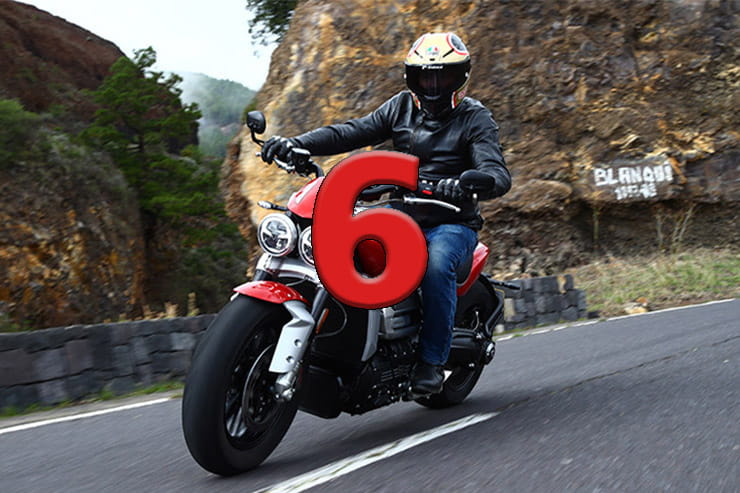 Triumph took us to Tenerife last November for spin on the new duo and I was mightily impressed with how well the bike handles. Even though its kerb weight is over 300kg, it’s surprisingly lithe. The GT is more comfortable of the two but you get a lot of bike and lot of high standard components for your money. The engineering to put this thing together is first class, even down to the way the leads and cables around the handlebars are well hidden plus the detailing like the pillion pegs. 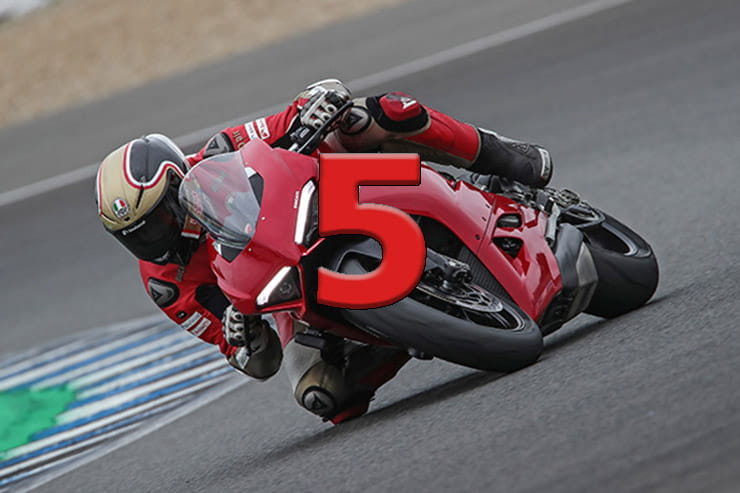 Into the top five now and we find ourselves back at the Ducati stand because next up is the Ducati Panigale V2 – the only twin cylinder sports bike left in Ducati’s ranks. Some might call it the ‘baby Panigale’ but this little minx still has plenty of power.

It replaces the Panigale 959 and the updates have transformed the bike. The styling matches the V4 with new side panels and a redesigned tail a section. There’s a single-sided swing arm now plus updated engine and new stubby exhaust design.

At 200kg with 155bhp, an accommodating chassis and fantastic spec of electronics to keep everything in check, away from the £20k + superbikes available right now, this £15-grand version is terrific value. It’s predictable handling and quick turning and great brakes will have a capable rider scaring the big boys on a track day. 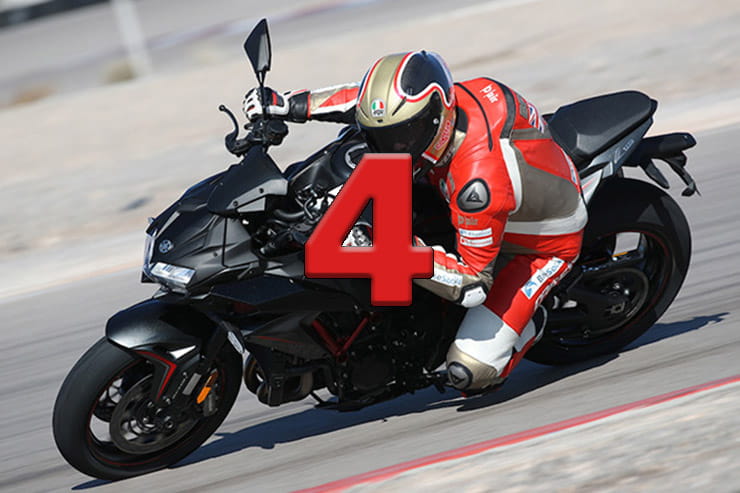 The ‘Supercharged Supernaked’ Kawasaki Z H2 is in fourth spot.

The popularity of powerful naked bikes have been on the rise, it’s one of the most popular categories and Kawasaki have set the bar very high with the 197bhp peak performance figure from the supercharged four-cylinder engine. At just over £15,000 there’s tremendous value for money here – the mid-range burst on this is awesome, anything from 4-8000rpm and a quick twist of the throttle gives you a lovely tingly feeling. Then, off the throttle and the chirp of the excess air is dumped through a blow-off valve.

It’s heavy though; 239kg is the claimed kerb weight though on the press ride, I can’t say that it impacted too much on the handling performance. 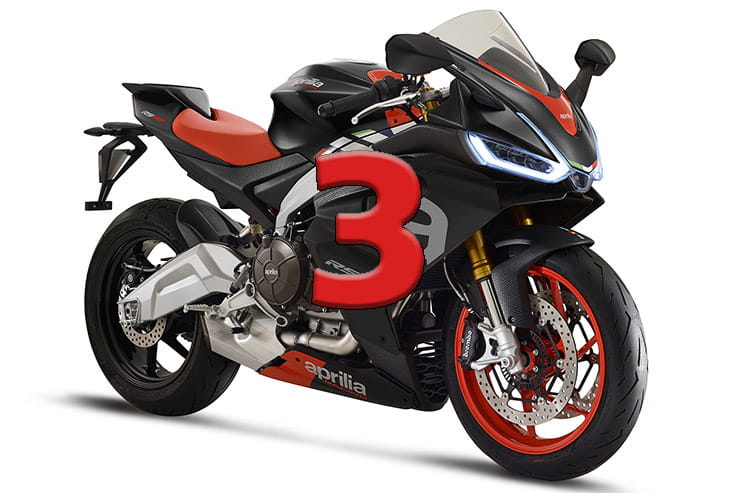 Well, unfortunately despite its popularity, the Aprilia RS660, ranked as the third most popular, was not at the show. Unveiled as a concept at the Milan show in 2018, the bike was confirmed as a full production model at the 2019 show. The Italian company calls it “the first in a range that will use the newly-developed engine platform” with a Tuono 660 concept already unveiled and a Tuareg 660 teased.

The forward-facing 660cc, euro 5 friendly parallel twin with a 270-degree crank makes 100hp, a very handy amount for a twin of this capacity There’s also going to be an A2 compliant version, also with a high spec; aluminium chassis, asymmetric swingarm and a mass of electronics including a 6-axis IMU, quickshifter, riding modes, cruise control and the all-important wheelie control.

It’s still going through the homologation process and wasn’t at Motorcycle Live either because there was only one show bike and that was in the USA at the time. A Piaggio representative said, “we expect it to be enormously popular for us and we expect to see it in dealers later this year.” I expect that means October time. 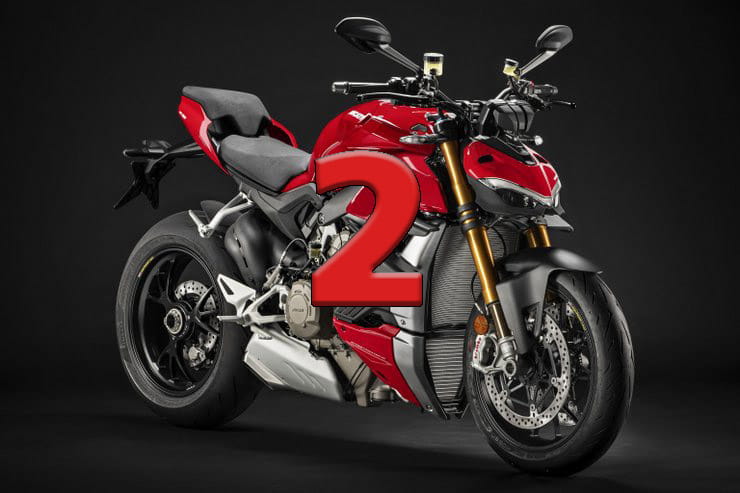 The runner-up, and it was very close between the top two, is the Ducati Streetfighter V4. With a claimed 208 hp and an approximate kerb weight of under 200kg, there’s no wonder this bike has wings, it’ll probably take off otherwise. We’ve yet to ride the Streetfighter V4 but there’s been so much buzz around this bike which has had its 1103cc V4 engine from the Panigale tuned and in fact makes it peak torque figure higher in the rev range though its gearing focusses on acceleration rather than top speed.

There are two models in the range, the standard bike is priced at £17,595 with the higher spec ‘S’ at £19,795, which gets lighter weight forged aluminium wheels and electronically controlled Ohlins forks and shock. 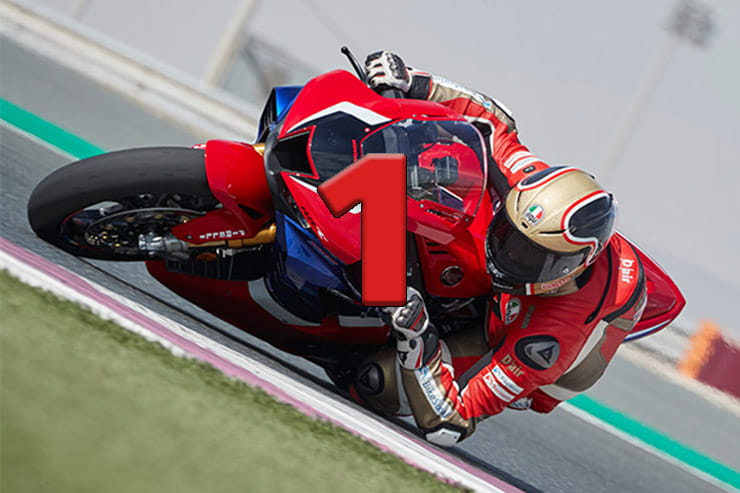 Gathering the most votes was the stunning 2020 Honda Fireblade. Or to give it its full title, this is the Honda CBR1000RR-R Fireblade SP.

There are two models in the range; the standard bike costs £19,995 and isn’t equipped with the up and down quickshifter, but it is equipped with Showa suspension and Nissin brakes instead of the Brembo Stylema brakes and electronically adjustable Ohlins front and rear suspension on the SP, which also has a lightweight lithium-ion battery. It also costs £23,495.

This bike is completely new for 2020 and has probably been the most eagerly anticipated because of the very un-Honda-like 214.56bhp peak power figure coupled with a new frame, enhanced electronics and a thirst for race wins. The press launch took place a few weeks ago at the Losail circuit in Qatar which demonstrated the Fireblade’s incredible ability. Make no bones about it, this is a race winning machine. Honda aren’t even dressing it up as a highly able road bike. After riding it, I can categorically confirm that all the performance comes at the top of the rev range which of course means it’ll be at home on the track instead of the roads, while the riding position is so race-oriented with your knees tucked up around your ears. It’s a fantastic bike to ride, incredibly easy to go fast with a highly-sophisticated suite of electronics, all of which is adjustable to suit any ride or rider.

Are there any bikes you think should have made the top 10? Let us know in the comments section below. 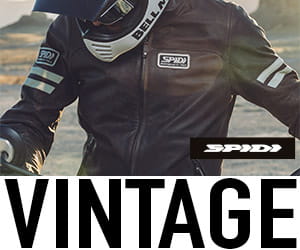