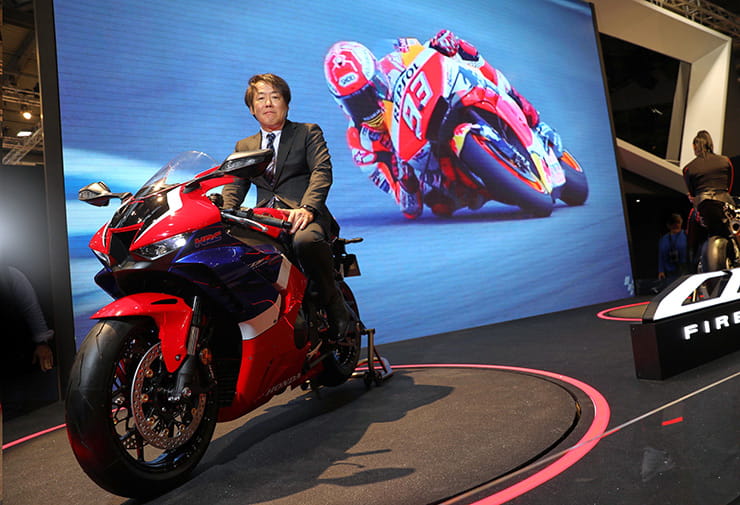 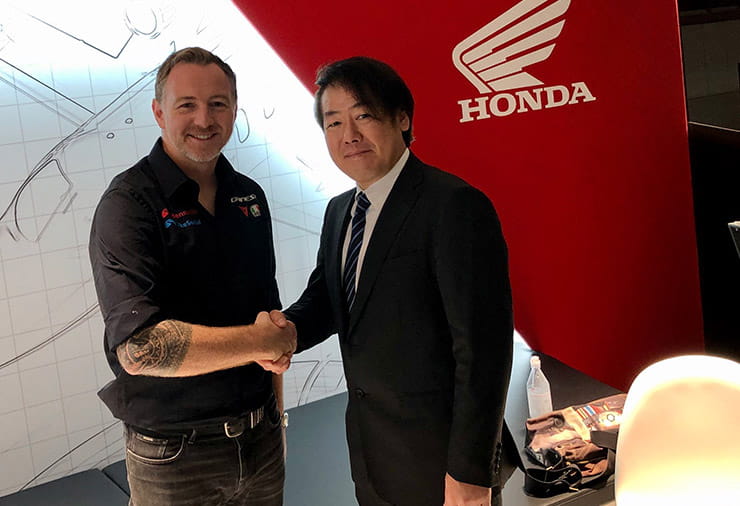 He might as well be called St. Nicholas, Father Christmas or even ‘Santa san’ because Yuzuru Ishikawa, the man behind the new 215bhp supersports motorcycle from Honda, has certainly delivered his package to the expectant dads, mums and even teenagers with wall space to fill, if that’s what they still do.

The 2020 CBR1000RR-R and SP versions were revealed to the world on Monday evening but Ishikawa, also known as the Large Project Leader, was not resting on his laurels. The projects infancy can be dated back to before the 2017 model even came to market and even though the Large Project Leader, who has also been responsible for the ’02 RC211V, ’16 RC213V-S and ’18 CB125R, was “extremely happy about the reaction but my next thought was, ‘ok, we need to win some races next year now’”.

We’d met on the first floor of the vast Honda promotional stand at the annual Milan-based motorcycle show known as EICMA, which was filled with new and existing models in all sorts of guises and colours. The small café area played host to journalists and dealers from around the world, as well as boss of the Honda Racing BSB team, Havier Beltran, who I’d spoke to at the Fireblade’s unveiling. Having enjoyed limited success with the outgoing bike (A. Irwin’s win at Thruxton and a handful of podiums for Fores at Donington), he was understandably buoyant about the new machine and couldn’t wait to get his hands on it – paying particular attention to the shortened seat unit and longer swinging arm.

According to Ishikawa, winning races is the “number one priority” with the 2020 Fireblade, a competitor in production-based series such as World Superbikes, British Superbikes and the Endurance World Championship which includes the oh-so important to all Japanese manufacturers, Suzuka 8 hours. Race winning wasn’t necessarily the primary focus of the bikes development in the first place. That’s down to the age-old reason behind all consumerism of customer demand. “It wasn’t the case that because the SP2 wasn’t winning that we had to make a bike like this in order to win, it was more the case that we’re seeing the number of customers taking their bikes on track days is just increasing, increasing and increasing so the bike needed to change to meet the demands of that type of customer which brings along with it the horsepower which can then be used in racing to improve the race performance as well,” the ‘blade boss. 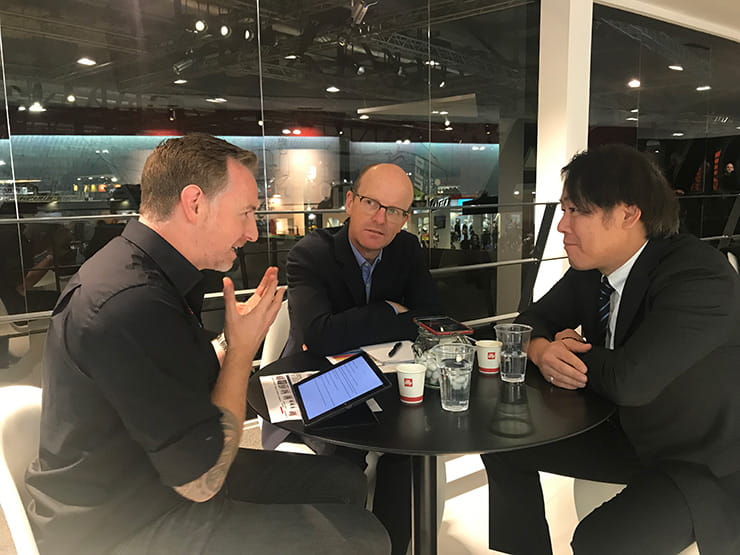 Above: (l-r) Mann, translator and Head of PR for Honda Europe, Paul Nowers plus Yuzuru Ishikawa

Back in 2017, the new Fireblade was heralded at its launch because of its light kerb weight, small dimensions and resulting excellent poise on track which transferred into a fine road bike too. Results and a couple of high profile incidents unfairly, in some opinions, wrecked the Honda’s reputation with social media commentators writing the bike off without even ridding it.

Before that model had even been unveiled, the team at Honda had begun work on its replacement, “we’d already started considering what direction we wanted to take the bike,” Ishikawa told me. “Nothing was set in stone (back then) but we were seeing the number of customers taking their bikes on track days is just increasing, increasing and increasing so the bike needed to change to meet the demands of that type of customer, which brings along with it the horsepower which can then be used in racing to improve the race performance as well.”

And if you are in Honda’s R&D team with the target of race performance from a road-biased machine that must comply with certain homologation-based regulations in mind, then why not call up your colleagues from down the hallway in HRC (Honda Racing Corporation). They know a bit about winning MotoGP World Championships, after all Marc Marquez has won six of the last seven world titles.

“The involvement has been very strong especially on the engine technology. So, getting this new power figure from the engine is all thanks to the cooperation with the HRC guys, so that has been a big impact on the development,” said Ishikawa.

He continued to explain the association, “For the engine and the electronics, the HRC and Honda development team worked hand-in-hand. Similar for the electronics, there are a lot of electronic engineers working on the HRC and the CBR and they are also working very closely together. When it comes to the aerodynamics, it’s more the case that all the masses of data that HRC produce, they give that to our guys to learn from and take the Fireblade where we wanted to. And then in terms of the chassis there’s a huge amount of data about chassis rigidity and flexibility that comes from HRC that we can then translate into what we want with the CBR.

“If you’ve got a frame and a chassis that is stiff in all directions then it’s not going to be easy to ride on the road but even in MotoGP the chassis must have flexibility in the right places, so it’s really a question of sharing with them which parts of the frame are needed to flex in order to get the performance. So, in that respect there’s a similar requirement for the CBR as there is with MotoGP bike, about which parts of the chassis need to flex in order to give the best feedback to the rider from the track or the road.” 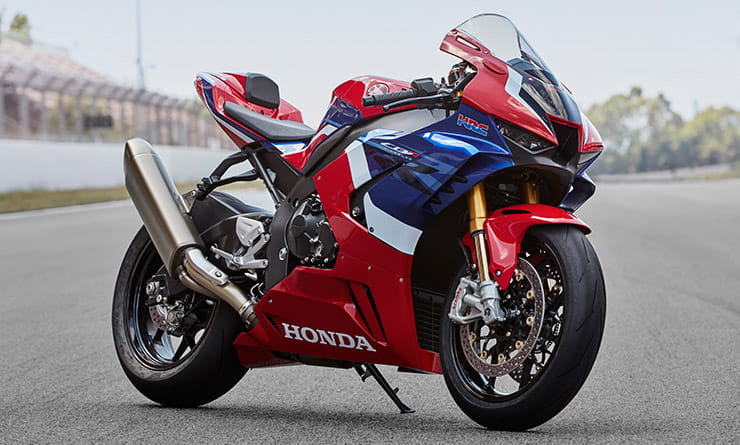 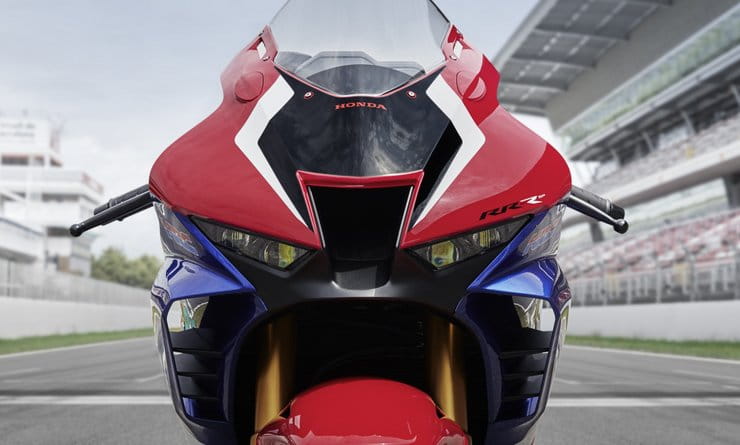 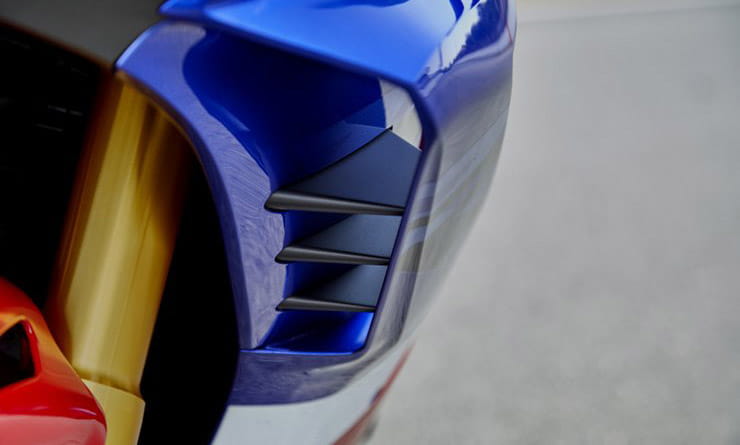 Interestingly, despite the power figure dominating all competitors, it wasn’t Honda’s original intention, with the Fireblade boss stating, “We did have a number at the start which is less than the number we ended up with!”

So then it was a case of working on getting the power could be down onto the track or the road. “That is critical, all the dimensions of the bike and the packaging of the bike has been completely reconsidered and rethought to make sure the power can be used. So certain parts of the frame are really quite flexible so we’ve not lost the handling of the Fireblade. You’re right, it’s all about it’s all about the overall balance of the package.”

And on the subject of balance and handling, Honda’s new supersports bike comes with Winglets. These aero achieving appendages have become customary in MotoGP for a fair few years now, and more so latterly on road machines with the Ducati Panigale V4R springing to mind. But drawing on design comparisons with the Bologna-born missile would see a Japanese victory because the Fireblade’s are more discreet and part of the overall design instead of an afterthought.

Ishikawa explains, “Because they’re such normal practice in MotoGP now we felt that in our supersports bike it would make perfect sense to have winglets so it wasn’t a question of whether we were going to have winglets, it was a question of what kind and shape of aerodynamic aids we should have on the overall package, so they were in from the start.”

I knew he’d not be drawn on the possibilities of using an alternative four–cylinder layout for his smart new motorcycle. A new V4 sportsbike from Honda is not something we’ve not seen since the homologation special RC45 back in 1994 and despite the patents filed for a V4 superbike over the last few years leading to all sorts of speculation, even by us - though back up with good reason, the man responsible for this new chapter in the Fireblade’s long and distinguished history kept his cards close to his chest when I asked if a V4 had been considered. He said, “Yes, we did a test using the RC213V-S engine. We did a research project into how that 213V-S engine might work in a Supersports bike.

From an earlier story, we know that Honda has been working on a V4 superbike, potentially to be called ‘RVF1000’, it’s a completely separate project and at the moment we still don’t know for certain whether it’s been green-lit for production. Patents filed for the new V4 over the last couple of years have shown it to use a semi-monocoque-framed design, similar to Ducati’s Panigale, allied to a version of the RC213V-S’s MotoGP-derived engine. Those patents explain that the new chassis – made of cast aluminium – would radically ease mass production and reduce costs compared to the original, painfully expensive RC213V-S.

But for now, let’s bask in the glory of the new-for-2020 Honda CBR1000RR-R Fireblade. A bike that we should get to ride early in the new year, so keep your eyes on BikeSocial for the first review.