Yesterday we bought you the news of Suter securing an entry at this year's Isle of Man TT with their MMX 500 2-stroke GP bike, so we pulled together our top 10 GP replicas, in no particular order:

New, full-on, 500GP style two-stroke V4 track bike is arguably one of the most exciting motorcycles ever to go on sale. The brainchild of GP engineer Eskil Suter of Switzerland’s Suter Racing it’s an all-new, 576cc V4 stroker producing 195bhp held in a bespoke, CNC, fully adjustable twin spar frame adorned with GP-spec Ohlins and Brembos plus OZ wheels. Track legal only just 99 will be built with prices starting at $123,500 (£85,777). 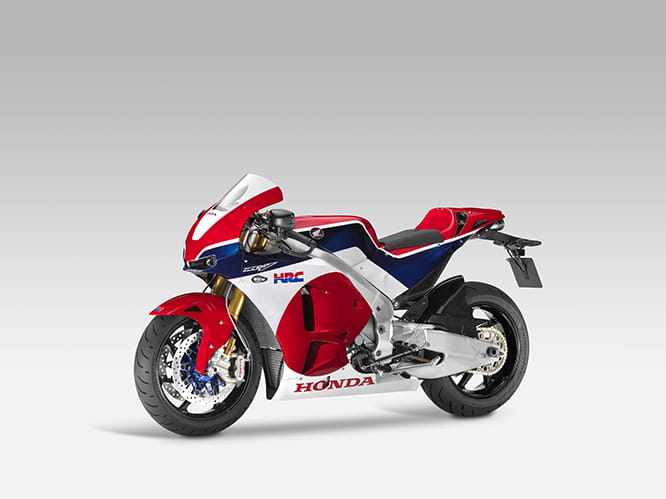 Honda’s stupendous MotoGP replica for the road as launched at the end of last year had been long-rumoured but no-one dared to quite believe it until it was unveiled at the Milan Show in November 2014. It’s based on the 1000cc RC213 V4 of 2012, bristles with Ohlins and Marchesinis and, in stock trim, produces 159bhp which is slightly disappointing the €188,000 (£138,000) price. A full ‘Sports kit’, which shaves 10kg off the weight and boosts power to 215bhp etc, however, is available for €12,000 extra. 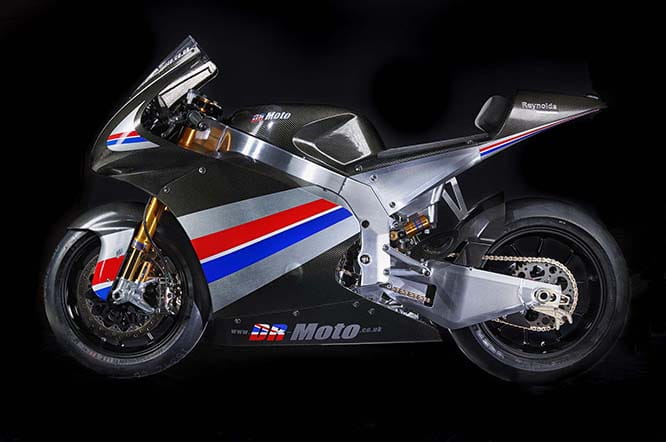 Brand new, bespoke, British-made track bike created by former members of the Team Roberts GP team and intended to deliver, as closely as possible, the MotoGP bike experience. As such it features a machined-from-billet aluminium twin spar frame with adjustable everything, top spec cycle parts such as Ohlins suspension, Brembo brakes and Marchesini wheels, carbon bodywork all powered by a superbike spec R1 engine boasting 200bhp+. Prices start at £89,500 depending on spec. 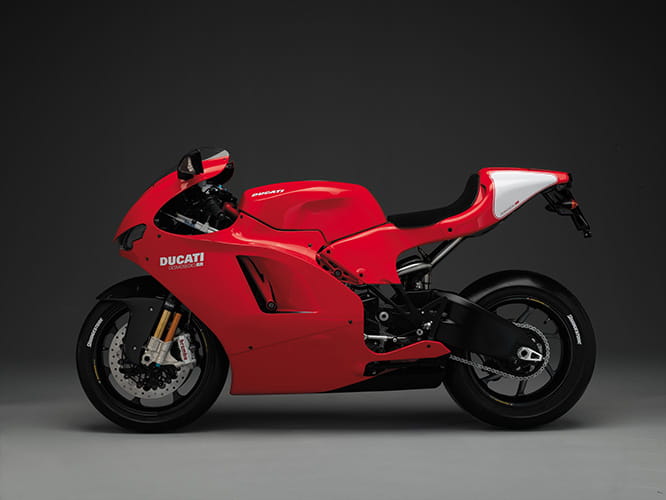 The original ‘MotoGP bike replica’ was produced in limited numbers by Ducati between 2007 and 2009, modeled on Loris Capirossi’s 2006 GP6 and produced 200bhp from its 989cc V4. So stiff and extreme that, in reality, most would be better off on a 1098R, especially on the road, for half the price but it’s still one of the most desirable and collectable of all Ducatis which keeps used values above £40,000. 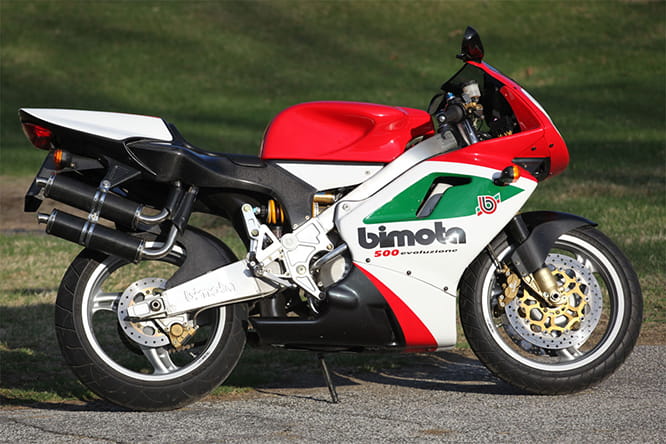 Ambitious but flawed GP-style 500cc two-stroke twin was a mouth-watering idea but proved so troublesome it almost sank the Italian company completely. A 110bhp engine in a lightweight, fine-handling chassis could have been delicious, but engine problems, particularly with the fuelling, disappointed while a new breed of mainstream superbikes, led by Yamaha’s new R1, stole its thunder. Sorted ones (and there are a few) still tempting, though… 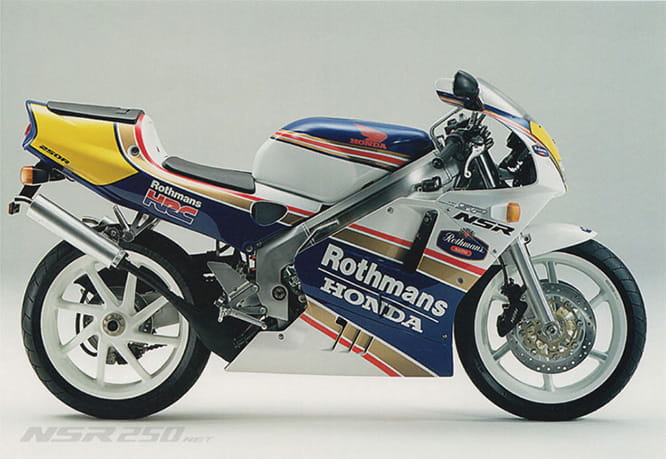 OK, so it’s a 250 twin rather than a 500-4, but Japanese GP replicas (RCV aside) don’t get any closer or more mouth-watering than Honda’s exquisite NSR. This ultimate, final incarnation of the Japan-only (although many made it to the UK as grey imports) V-twin GP-alike featured single-sided ‘Pro-Arm’ rear suspension and ‘Smart Card’ ignition to go with its screaming performance and knife-edge handling. SP versions, in Rothmans, HRC or Repsol colours, are the most desirable of all. 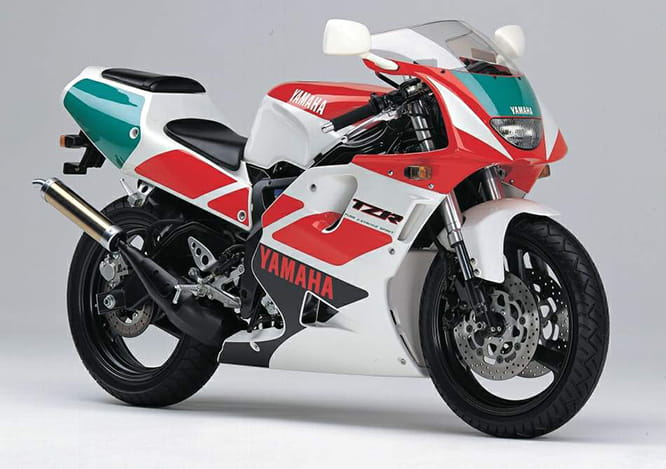 Arguably the nearest any of Honda’s Japanese rivals came to competing with the NSR, the 3XV was the ultimate version of Yamaha’s similar, road-going (but also Japan-only), two-stroke 250GP replica and also its first to be a V-twin (previous versions were parallel twins). The result is beautiful, screamingly addictive and fab-handling. Best of all is the SP version with multi-adjustable suspension, dry clutch and close-ratiogearbox. 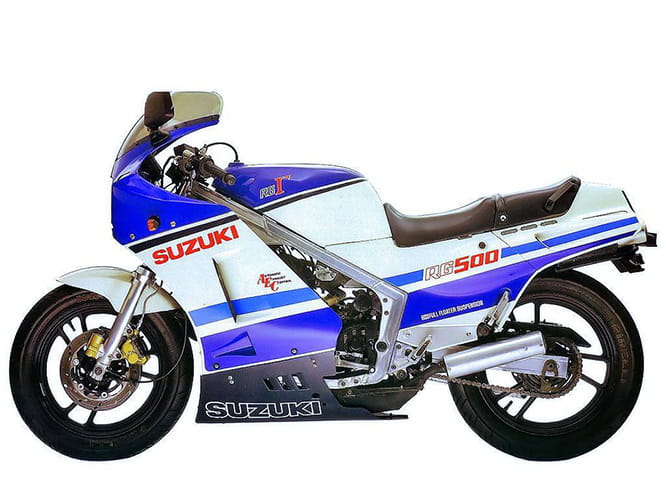 Legendary, road-going GP500 replica built during the brief, mid-‘80s fashion for such bikes (along with the Yamaha RD500 and Honda NS400 below) and, arguably, the best of the breed. Inspired by the 1984 RG500 ‘Gamma’ GP machine, it’s a twin crank, liquid-cooled two-stroke ‘square four’ held in an tubular box-section aluminium frame and wrapped up in GP replica bodywork. It looked great, with 95bhp went (for its time) like stink, quite literally. Today they’re extremely collectable, regularly fetching £10,000+ and rising. A 400 version was also produced for Asian markets with some coming to the UK as grey imports. 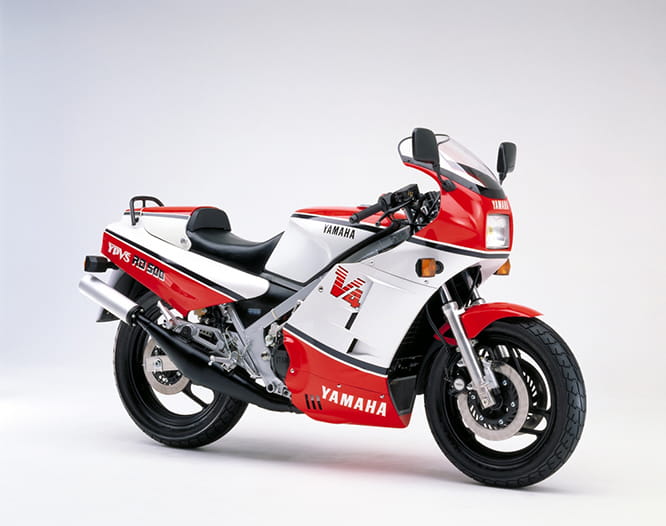 First to arrive of the ‘80s GP replicas was, like Suzuki’s subsequent RG, a faithful replica of Yamaha’s then works GP500 contender, the OW61 and like that bike featured a liquid-cooled two-stroke V4. Although arguably more sophisticated than the Suzuki, with ‘just’ 85bhp and a steel frame (although the overseas RZ500 version featured an aluminium version), it couldn’t quite match its later rival. Even so, great looks and an even stronger pedigree linked to Kenny Roberts and Eddie Lawson means it’s equally prized today.

Being ‘just’ a 400 (to comply with domestic Japanese licensing laws), plus having an NS/RS-alike triple configuration meant that Honda’s attempt at a GP replica stroker in the mid-‘80s never quite grabbed the attention as much as its Yamaha and Suzuki four-cylinder rivals. Its slightly softer performance, with ‘just’ 72bhp, didn’t help either. On the plus side, it was arguably more refined and easier to ride and more durable, too. Today it’s significantly cheaper than an RD/RG as well…