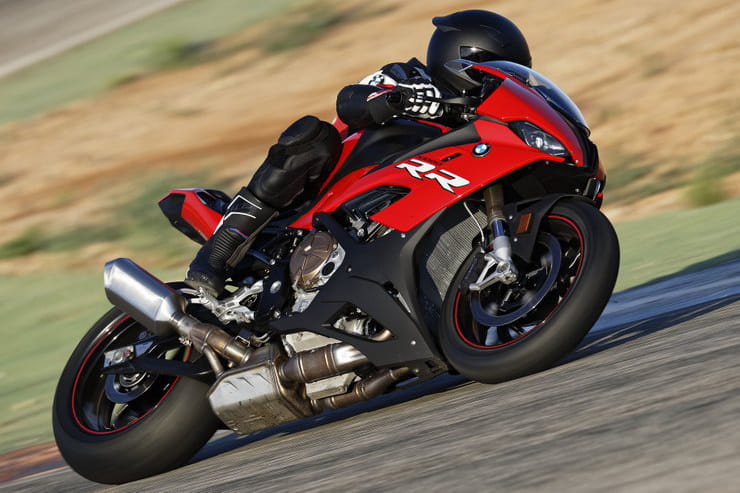 The 21st century has seen a remarkable transformation for BMW’s Motorrad arm. Back in the days of Millennium Bug scares the Bavarian firm’s machines were regarded as a staid and sensible cliché for fluorescent-clad, safety-conscious touring riders. Middle aged middle managers with flip-up lids and RoSPA stickers on their tent-packed panniers. Few could have suspected that just nine years later the same company would be dominating the sales charts and launching a superbike that would instantly manage to rival – and beat –  established Japanese and Italian rivals with decades of experience in the field.

Now that bike, the S1000RR, is into its second generation and has spawned a whole array of derivatives and spin-offs, and while top-level racing success is still frustratingly eluding its grasp it’s hard to even recall a time when BMW wasn’t a serious superbike maker. 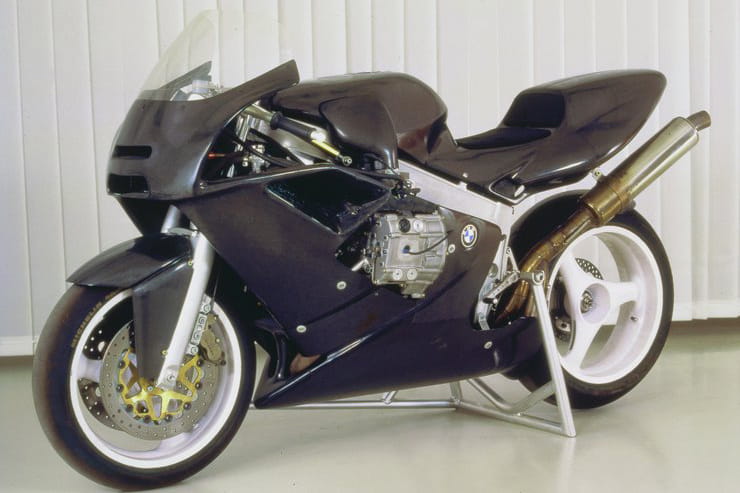 The BMW S1000RR might have been an instant hit when it was launched in 2009 but its path to production was far from smooth. In fact it very nearly didn’t happen at all, and even once the firm had decided on building it, the firm’s traditional tendency to apply alternative technology nearly sentenced it to an oddball design direction that it’s hard to imagine being a success.

But let’s go back a little further. Even as far back as the 1990s there was an emerging interest within the firm in reviving BMW’s long-ignored racing heritage. The earliest sign appeared with BMW’s prototype R1 (yes, they beat Yamaha to that name). Four were built between 1989 and 1992 to explore the possibility of entering the then-new WSB class. A radical design with a water-cooled, 996cc DOHC boxer twin with Ducati-style Desmo valves, it offered promising performance but the insistence of following BMW tradition with the boxer layout and a shaft final drive meant it would probably not have been a racing success.

Later we saw the R1100S and the one-make BoxerCup race series, eventually developing into the 2008 HP2 Sport, but by then BMW had already decided that boxers weren’t the solution. 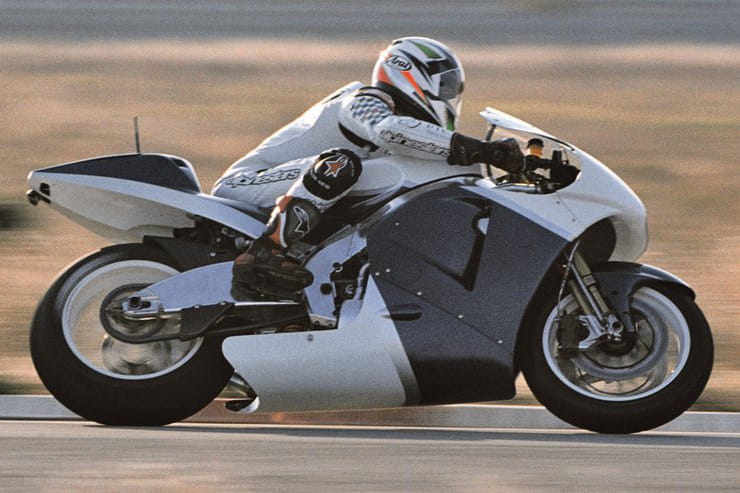 This is BMW’s stillborn MotoGP bike, later used as a technology testbed to develop the S1000RR

MotoGP’s switch from largely irrelevant two-stroke technology to 990cc four strokes in 2002 was arguably the trigger that started the development of the S1000RR. But initially BMW’s interest was entering MotoGP itself rather than developing a new road bike.

The firm’s prototype MotoGP bike went through several iterations, all using a three-cylinder 990 engine. Like Aprilia at the time, BMW took its inspiration from Formula One, where its car arm was already competing with a screaming 3000cc V10. Just as Aprilia’s ill-fated RS Cube used an engine developed from Cosworth’s F1 expertise, the BMW prototype used big chunks of the firm’s own F1 experience as a basis. In its initial form the prototype proved heavy and slow, but it was improved over time and eventually BMW had to make a call: was it really going to go ahead with a MotoGP entry?

The firm commissioned a study into the potential PR benefits and risks involved with MotoGP and WSB, and on the back of that information made the call to ditch its GP project and put its efforts into creating a WSB-legal road bike. 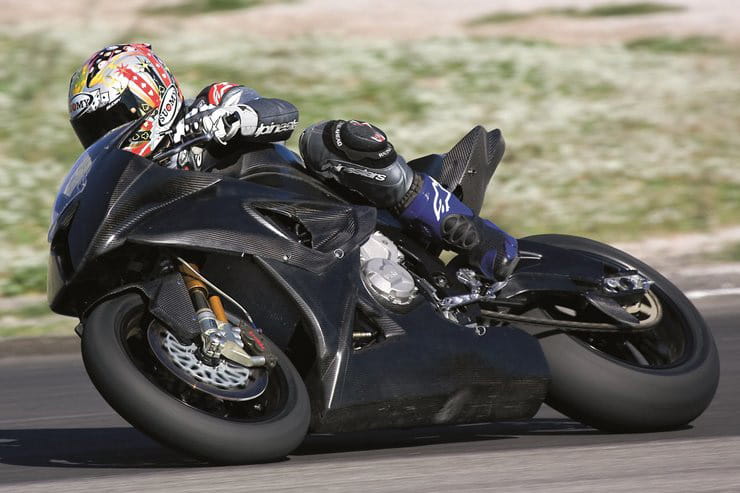 The original BMW S1000RR prototypes went under the codename ‘K46’. Race version was developed alongside the road bike

With a clean sheet of paper to develop its new road and race bike, BMW’s initial reaction was to see what else was on the market. At this point – the mid ’00s – Suzuki’s GSX-R1000 was the best option out there, becoming a touchstone for BMW’s development.

At first the company struggled to supress its urge to be weird. Development riders were spotted testing Frankenstein machines using based on GSX-R1000 K5s that had the front of their frames hacked off to allow the fitment of a race-spec version of BMW’s Duolever girder-style front suspension. Machined from billet aluminium, that front suspension looked spectacularly strange on the otherwise-familiar GSX-R, but the swift decision to use conventional telescopic forks on the production S1000RR suggests it didn’t work as well as hoped.

The first true prototypes for the project – simply called ‘K46’ at the time – were immediately impressive, not least because they initially used Yamaha R6 bodywork as a disguise. The target of 1000cc performance in a 600cc-sized package was clearly being hit. Later on, race-style versions of the true S1000RR bodywork replaced the R6 panels, but some onlookers still believed BMW was developing a 600cc bike rather than a 1000cc superbike.

A history of the S1000RR with Product Manager, Josef Machler 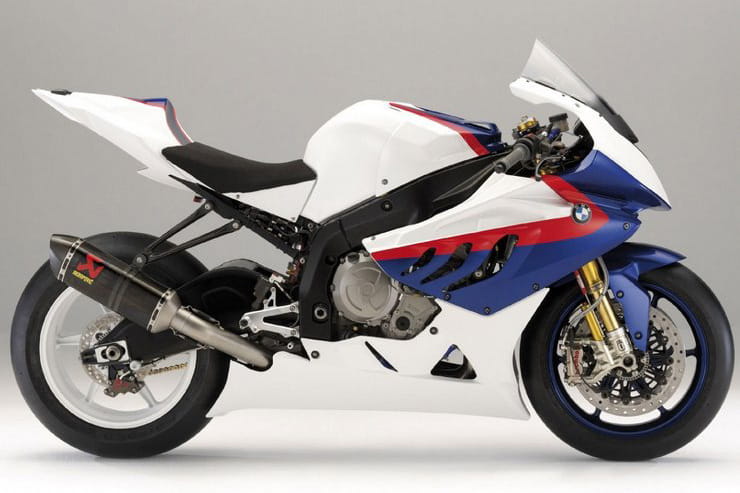 The S1000RR made its public debut at the end of 2008 in race-spec form, sporting the firm’s famous ‘Motorsports’ colours of white, red and blue. At that stage, with no sign of the lopsided headlights that would become a first-gen S1000RR signature, the immediate impression was that BMW had gone Japanese. Yes, it was a spectacularly compact package, but the recipe was the same that Honda, Yamaha, Suzuki and Kawasaki had been following for years, albeit with the addition of European Brembo and Ohlins components. Aprilia’s RSV4 – launched a few months earlier – looked the much more ambitious project with its V4 engine and Gigi Dall’Igna-designed chassis.

Indeed, WSB results in 2009 when both the Aprilia and the BMW made their debuts, backed up that appearance. Aprilia achieved several podiums and a race win with Max Biaggi, while BMW’s ace team of Troy Corser and Rueben Xaus rarely broke into the top 10. The chasm remained over the next few years, with Aprilia grabbing the title in 2010, 2012, 2013 and 2014 while BMW initially scrabbled to the occasional podium before Marco Melandri could mount a genuine title challenge in 2012 (he finished third eventually, but with six race wins - the most of anyone that year). Further wins for Melandri and Chas Davies in 2013, on the way to fourth and fifth in the title chase, couldn’t persuade BMW to continue its factory effort the following year. While private and satellite S1000RRs remained, they rarely troubled they scoreboard over the following few years, although a revived factory-backed effort with the all-new S1000RR in 2019 shows a that the desire for WSB glory remains at BMW. 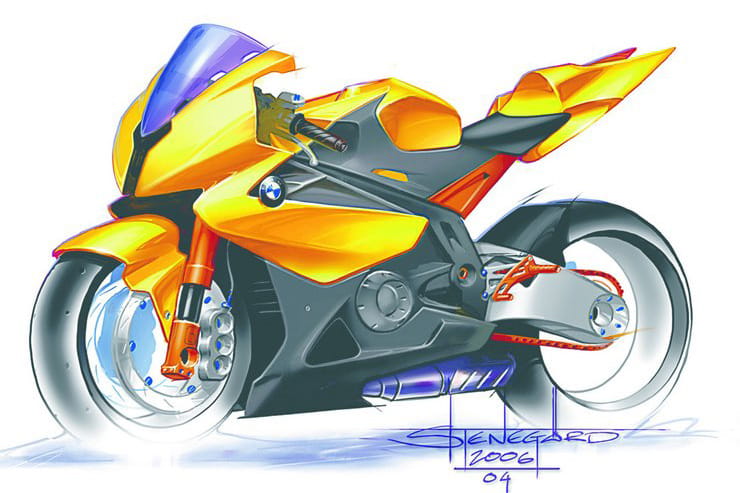 The old adage ‘Win on Sunday, Sell on Monday’ might be true for some but when looking at the parallel histories of BMW’s S1000RR and Aprilia’s RSV4 it’s hard to back it up. While Aprilia stormed to successive WSB titles and BMW struggled to score, it was the S1000RR that instantly emerged as a real showroom rival to the established Japanese superbikes.

Having been launched into the jaws of the worldwide financial crisis, with bike sales – and superbike sales in particular – collapsing worldwide as buyers struggled to justify an expensive new toy, the S1000RR’s sales success was doubly impressive. It was doubtless helped by BMW’s reputation for longevity and reliability, which meant strong residual values. Coupled to the low interest rates introduced to combat the financial crash, the S1000RR’s limited depreciation meant surprisingly affordable monthly PCP payments despite list prices higher than many rivals. 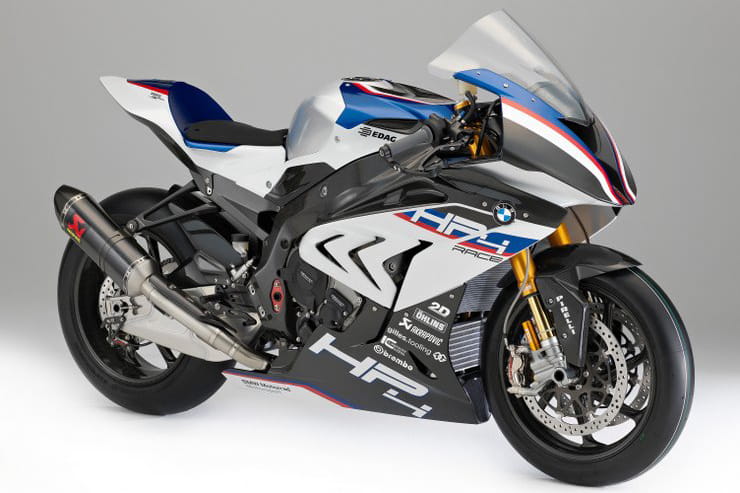 HP4 Race was the ultimate development of the first-generation S1000RR. Can you imagine what’s in store for the all-new version?

With PCP sales showing that higher-spec, more expensive bikes could often cost little more to own than their cheaper brethren there’s been a noticeable shift towards more exotic superbikes in recent years. And BMW obliged with its updates to the S1000RR.

As well as year-on-year tweaks to improve the bike, adding ever more complex electronics and tweaking the styling in a 2012 facelift, BMW added the HP4 version in 2013 to give an even more aggressive option and debut technology including semi-active suspension.

Come 2015 it was time for another tuck and tweak for the S1000RR, with a modded frame and geometry as well as engine revisions and yet more electrickery.

But it was 2017 and the track-only HP4 Race that really marked the peak for the S1000RR. Costing a jaw-dropping £68,000 this track-only beast offered 215hp, but its real party piece was its weight. At 146kg dry it offered something that was really in touching distance of a MotoGP experience thanks to a full carbon-fibre frame. So what if the engine – effectively in WSB tune – needs to be replaced every 3100 miles (5000km)? 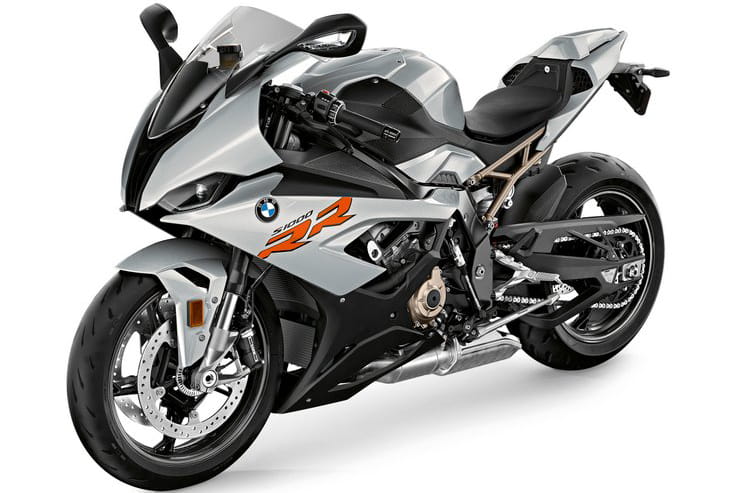 As early as July 2017 we saw spy pictures of a near-finished 2019 S1000RR and it was just as jaw-dropping as the original was. It would take until late 2018 before it was officially launched, and it was then that BMW dropped the real bomb about its all-new S1000RR: it was to be the first superbike to get variable valve timing and lift thanks to the firm’s ShiftCam system. Suddenly even the normal S1000RR had power that nudged the level that was in the realm of the HP4 Race just a couple of years earlier (207hp before you even start to dabble with aftermarket exhausts), as well as beating future emissions limits.

While the 2020 bike only gets colour changes, a new range-topping superbike that outdoes the old HP4 Race for exotic specifications is surely on the cards for release within the next year or two. BMW’s expertise with mass-made structural carbon fibre means a road-going S1000RR HP4 with a full carbon frame is far from unlikely before this generation of BMW’s superbike reaches the end of its life.

So here’s to a decade of BMW superbikes. We’re looking forward to what the next ten years brings.