The history of the Black Rats: London’s traffic police 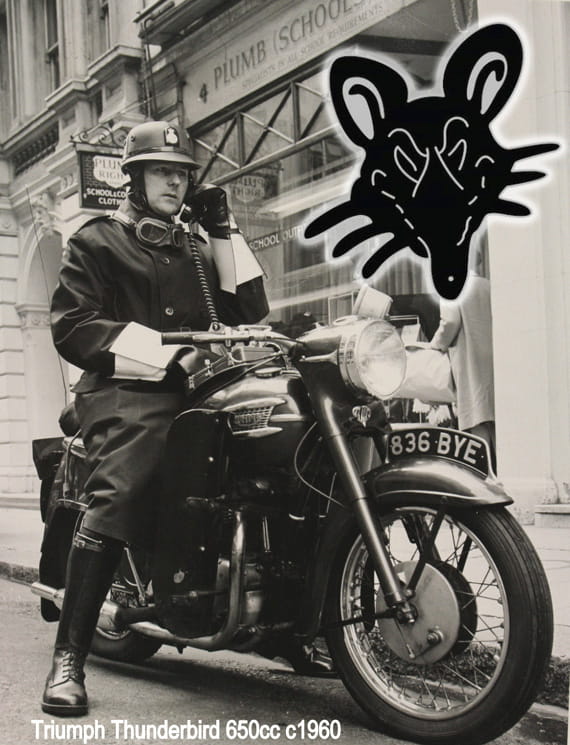 The ‘Black Rats’ are 50 years old, and while many of us have seen the small black and white rat face stuck on the back of a bike or car, very few of us know what the image means…

In the early 1970s, the term ‘Black Rats’ existed as a derogatory name for the unforgiving officers of London’s Metropolitan Police Traffic Division (Traffpols); they were known to be strict and would not hesitate to report their own mother for speeding, or another officer (particularly one from the CID) for some violation or another.

The origins of the name

One theory for the name was that rats eat their young if hungry, hence describing the actions of some of the officers as lacking in humanity…

In the 1950s the Central Traffic Squad was formed; the first Traffpol uniform consisted of a long black canvas Gannex military-style riding coat – similar to those dispatch riders used in the war – and a black Everoak Corker helmet with black leather puttees over a stout pair of black boots.

The coats were split at the sides and had tabs or straps at the bottom edge that could be secured with buttons to keep the rider dry. When the officer dismounted these buttons were undone, leaving rat tails hanging, causing other officers to chant “Scurry, scurry it’s the Black Rats”.

It’s the best version of many stories but back then, as a misplaced matter of pride, the Traffpols’ uniform was never cleaned, and was usually coated with fag ash, waterproofed by generous quantities of oil received from leaking gaskets while scrabbling around under heavy goods vehicles. The then derisory term “Black Rat” was allegedly used by a CID officer in his best suit who had been stopped by one such scruffy, heavily whiskered Traffpol, who was clearly enjoying reporting his colleague.

Where did the logo come from?

Even those running the charitable Black Rat Merchandise were unaware exactly who was responsible for its conception, but finally a retired Traffpol officer named Michael Bartlett has come forward as the artist responsible for drawing the iconic rat on a paper canteen napkin at Bermondsey police garage in South London.

Bartlett had initially wanted to get into graphic design before joining the police and it struck him that although the name ‘Black Rat’ existed as a brand of sorts, there was no related logo. Ideas from colleagues in the canteen were drawn on napkin after napkin, with first prototypes looking more like ferrets, mice and even Roland Rat on a bad day…

A printer in Bermondsey was asked if it could put the image onto a T-shirt, but the company’s screen print ended up a disaster. It seemed then that the rat would have to be consigned to the rubbish dump.

A couple of months later however a school teacher friend who had just started a screen printing business on the side did a far better job of translating the image to clothing and before long the first tee delivery was made. The tops were only available in light grey in sizes small, medium and large, with the grinning rat’s face imprinted on the right breast, above the initials TDM, which stood for Traffic Division, M (South East London).

Bartlett sold the lot in 24 hours and donated half the profits to the Police Widows and Orphans fund, then reinvested the other half in a larger order. 500 car stickers were sold for 50 pence each, also selling out.

Trouble loomed when his Commander of Traffic Division called for him. Expecting to be praised, Bartlett was surprised at the senior officer’s language; “What the f@*k were you thinking? What in the name of Christendom will those f@*kers think of this? It’s f@*king elitist”.

In essence, the officer was not keen on the ‘Rat’ image and worse, Bartlett did not have a tee-shirt available to fit him

What he didn’t know at the time was that a report had been submitted by another of his bosses at his police garage requesting the rat be formally adopted and the proceeds donated to charity. It was bad timing however as the request was denied due to the political climate of the time and the rat went underground, remaining there for several years.

Secret supplies continued to be trafficked around the Met and into some other constabularies but the rat’s profile kept low. 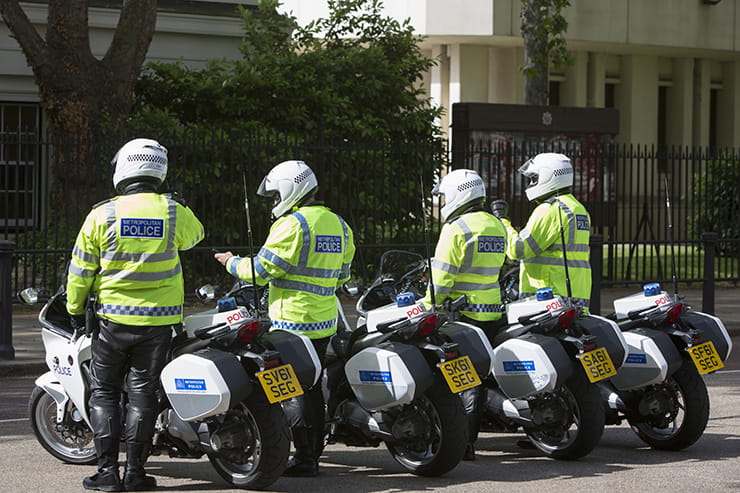 These days the black’s been replaced with hi-viz

Despite the subterfuge, in 1984 stickers and associated photographs of the rat began to appear in the media, at a tea house on the Everest trail and on the side of warplanes. One even survived a short ride on Ronald Reagan’s bumper during his state visit that year. A few years back Fast Bikes magazine even gave away free Black Rat stickers bearing the words “Don’t nick me, I’m one of you.”

Around 1990 Bartlett brought the rat out of semi-retirement to raise funds for Bliss – the charity for premature and sick babies – giving the new range of memorabilia a fresh impetus. Pretty soon it was being spotted the length and breadth of the UK, with many serving and retired Traffic Officers taking a new pride in both the name and image of the rat. Even Bartlett suggested earning an acceptance from his old Commander, who initially told him off but later displayed it with pride.

This idea that started in a police canteen and survived numerous attempts to exterminate it has gone on to raise huge amounts of money for charity, and has become an enduring symbol of the traffic police.

In 2013, after the death of a serving Police officer killed while on duty, the founders of Black Rat Merchandise decided to start a website to support the Traffic Patrol Orphans Gift Club, a charity that helps provide financial support to the children of Traffic Officers killed or seriously injured on duty.

That website became Blue Light Gifts and is run by serving Police Officers and staff in their spare time. Every single penny raised by sales is donated to charity and good causes, particularly worthy families who get two donations a year for the summer holidays and for Christmas to help them through difficult times. It also continues today to offer a collection of gifts, clothing and other items on behalf of the three Emergency Services.

Today you have every chance of seeing a Black Rat logo on a sticker, badge, cap, hoodie, neck tube, braces… or of course a T-shirt, despite there being very few Black Rats, Traffpols, or road police out there. Though with the quality of some drivers, maybe it’d be good to have them back?