Triumph Bonneville: 60 years of the world’s most famous motorcycle 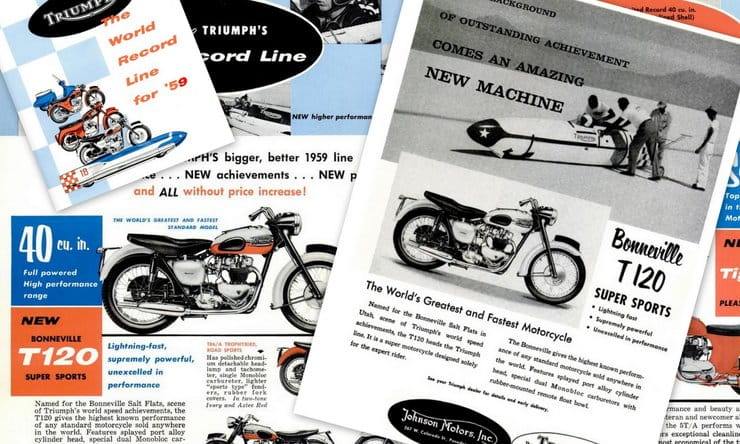 Is any single motorcycle model as legendary as the Triumph Bonneville? While most bikes from the 1950s have been largely forgotten over the last sixty years the Bonnie has remained firmly at the forefront.

It’s one of the few motorcycles models that have managed to leach into the mainstream conscience. Ask a non-rider to name a specific make and model, and surely the Bonneville is going to be a likely answer. And despite the fact that it’s gone from cutting-edge sports bike to retro throwback over a series of different generations, with the inevitable low points in between, it’s surely the only 60-year-old model that’s still as relevant now as it was at its launch in 1959.

For a bike that would go on to become a legend in its own lifetime, the Bonneville’s introduction came with relatively little fanfare. Bike magazines of the era tended to be moderate in their enthusiasm for new models – certainly when compared to the hyperbole of the modern press – but even by that standard the Bonnie’s reception was fairly muted when it made its first appearance.

The Bonnie took its name from a 1955 speed record – set at the Bonneville Salt Flats, of course – by American rider Johnny Allen. He achieved 193.3mph on a much-modified Triumph-powered streamliner, Devil’s Arrow (above), and after losing the title in 1956 upped the speed to 214.17mph in 1957 (although the FIM didn’t recognise that record). The road-going machine bearing the Bonneville name two years later didn’t share much more than its twin-cylinder layout and 650cc capacity with the record bike, but it was enough to give a dose of high-performance credibility to the firm’s new range topper, which claimed to be the fastest production model on offer anywhere in the world when it was unveiled at the Earls Court Motorcycle Show in 1958.

‘The new Triumph “Bonneville 120” provides the highest known performance of any motorcycle in the world today and will be the choice of the expert rider. Colour: Two-tone tangerine and pearl grey, with black frame.’

A period advert for the bike, also published in America – very much the Bonneville’s targeted sales region – replicated the same claims, saying: ‘Named for the Bonneville Salt Flats in Utah, scene of Triumph’s world speed record achievements, the T120 heads the Triumph line. It is a super motorcycle designed solely for the expert rider.

Who knew that rubber-mounted float bowls were such a selling point? 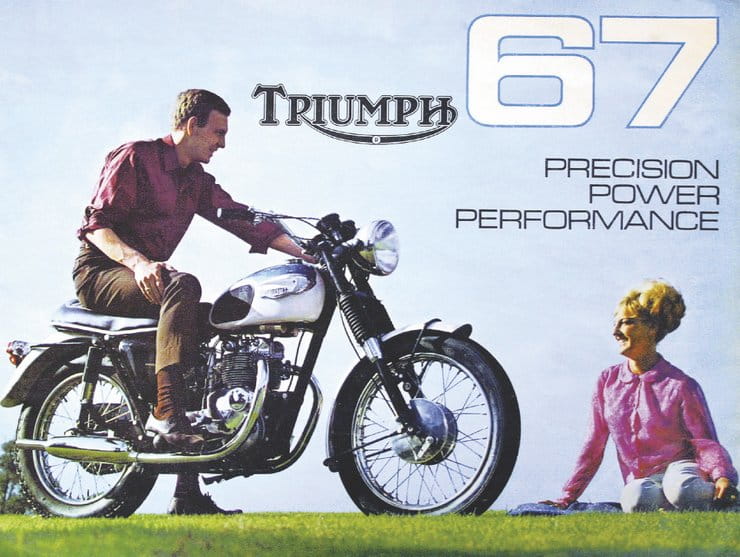 The original T120 Bonneville’s design wasn’t a huge departure from the rest of Triumph’s range at the time. Apart from the conventional tuning tricks like the twin carbs, it was basically similar to the T110 Tiger, featuring a development of the Edward Turner-designed 650cc ‘pre-unit’ (ie separate gearbox) parallel twin engine that could trace its roots back to 1937 and the 500cc 5T Speed Twin. The Bonnie is famed as Turner’s last design for Triumph, although he’s said to have been concerned about the bike’s high performance.

Perhaps rightly so, as it turned out, since early Bonneville T120s gained a reputation for high speed wobbles thanks to performance that overwhelmed the original frame design.

Fortunately, year-by-year improvements meant that the Bonneville shook off those early problems, gaining revised geometry and a stronger chassis by the mid ’60s and Triumph’s unit-construction engine in ’63.

By the tail end of the 1960s the Bonneville had hit its stride, racking up huge sales in the American market that it had always targeted, with Triumph dominating US bike sales in the over-500cc class, taking more than 50% of the market share by the end of the decade. But it was about to have the rug pulled from under it with the launch of Honda’s game-changing CB750 in 1969.

The tale of the British bike industry’s decline in the face of competition from Japan has been told many times, but it struck fast for Triumph and its parent, BSA, which had owned it since 1951. A redesign for the Bonneville in 1970 couldn’t stem the haemorrhaging sales, particularly as riders realised that the Japanese offerings didn’t only have a performance edge but also offered hugely better reliability, and the BSA group, including Triumph, was swallowed into Manganese Bronze Holdings, and specifically its subsidiary, Norton-Villiers to create Norton Villiers Triumph (NVT) in 1972.

Although the T120 remained in production until 1973, gaining another big change with the adoption of a new frame that doubled as the oil tank in 1971, the new generation of larger, faster bikes from Japan meant it seemed to be a machine of the past. 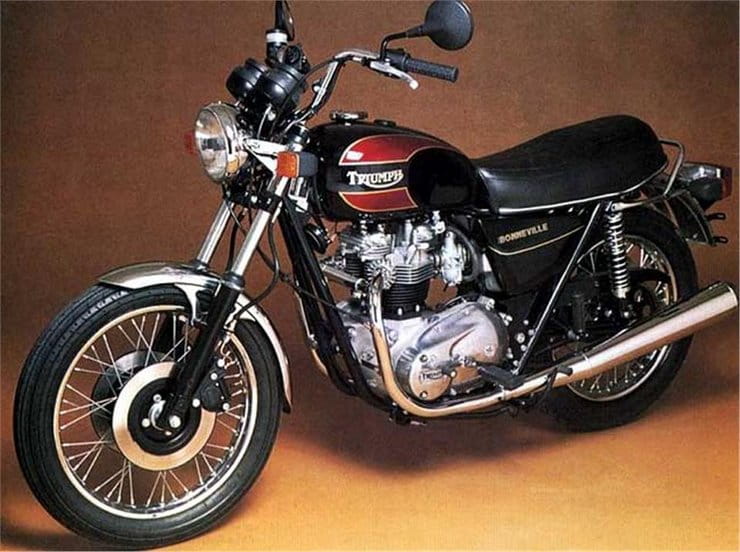 Triumph’s response to the need for more performance was to introduce the larger-capacity Bonneville T140 in 1973. Initially coming in at 724cc, it soon rose again to 744cc, although with only 49hp on offer (up from 46hp on the 650cc T120) it wasn’t in a position to make serious headway in the performance stakes against the likes of the CB750 and Kawasaki’s even more powerful, 900cc Z1 four-cylinder.

By this stage the Bonneville was Triumph’s mainstay model rather than its range-topping performance option – that role had been assumed in 1968 by the three-cylinder, 58hp Trident – but the Bonneville seemed old-hat compared to fast-improving machines from Japan.

NVT’s parlous financial state during the 1970s – prior to its collapse in 1977 – meant there was little opportunity to give the Bonneville major improvements, although at least it gained disc brakes in T140 form.

Despite the collapse of NVT, the Bonnie managed to remain in production. Earlier in the decade, workers at the firm’s Meriden factory had staged a demonstration against plans to move Triumph production to BSA’s Birmingham plant. Having gained government backing, the workers created the Meriden Motorcycle Cooperative, supplying NVT with Bonnevilles but as a standalone operation. When NVT went under, the Meriden Motorcycle Cooperative were able to buy the rights to Triumph, becoming Triumph Motorcycles (Meriden) Ltd and keeping the T140 and Tiger on sale. 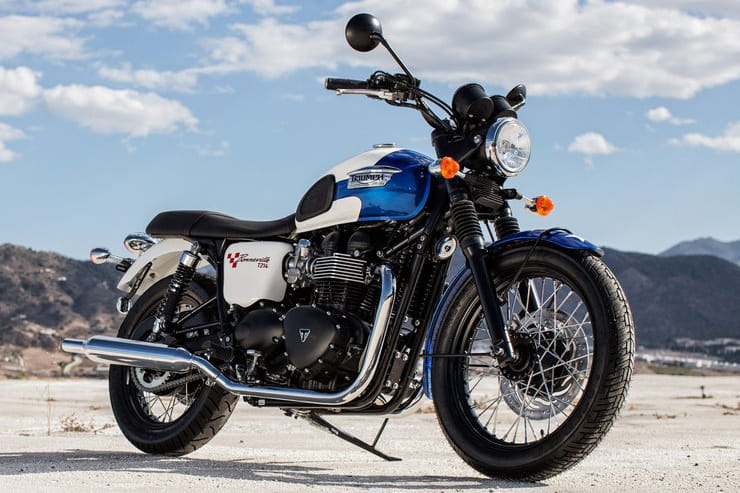 While Triumph managed to keep going at its Meriden plant – largely on the back of Bonneville sales – until 1983, that was the last year of production; Triumph went into receivership that summer.

Fortunately, John Bloor – flush with money from his successful building company – was in a position to snap up its mortal remains. Initially, his new company was called Bonneville Coventry Ltd; showing just how important the Bonneville still was.

Knowing that it would take years to realise his ambition of building a completely new range of Triumph bikes, Bloor set up a licencing deal with spare parts specialist Les Harris to allow Harris to manufacture Bonnevilles in production – albeit in small numbers – until he was ready to relaunch Triumph from the new base in Hinckley, Leicestershire, in 1990.

That would mark the end of the Bonneville for more than a decade, though. Bloor’s initial interest with the reborn Triumph brand was to reclaim the firm’s position as a credible rival to its Japanese and European competitors, and for that he needed resolutely modern machinery. In the years to come, bikes like the Daytona, Speed Triple and Trophy would do just that, but the idea of a new Bonneville was always lurking in the background.

It didn’t happen until 2001, when Triumph pre-empted the resurgence of retro-style bikes by launching the Hinckley-made Bonnie. Initially it was a 790cc twin, later growing to 865cc – first as the T100 in 2005 before all Bonnevilles gained the same motor in 2007.

Additional spin-off models proliferated as the interest in retro bikes grew, with the Hinckley Bonneville spawning the Scrambler and Thruxton as well as the Speedmaster and America cruisers and a host of special-edition versions over the years. 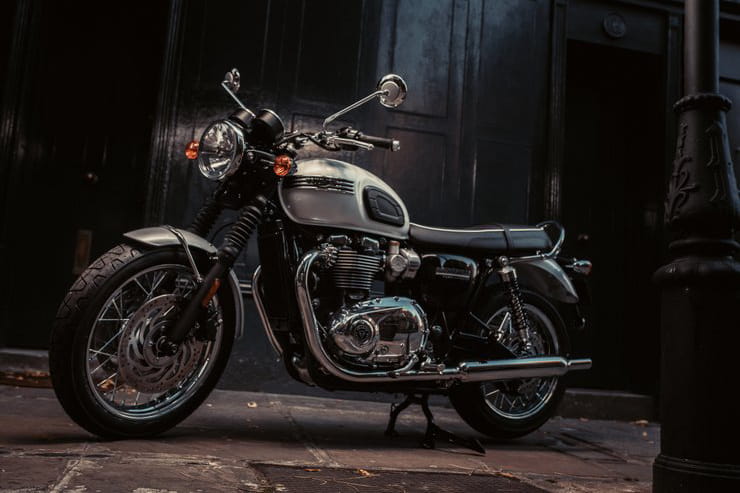 While other firms also pursued the retro idea in the early and mid ’00s – notably Ducati with its SportClassic range but also Kawasaki with the W650 and W800 – few persevered with the idea as tenaciously as Triumph. And when the real retro bike boom hit, the firm was well placed to take advantage of it.

The launch of the all-new Bonneville in 2016, which managed to look more authentic than ever despite packing a host of cutting-edge technology, meant the 1200cc Bonneville T120 and its spin-offs – the Bonneville Bobber, Scrambler 1200, Speed Twin and Thruxton, as well as the 900cc Bonneville T100 and similarly-engined Street Twin, Street Cup and Street Scrambler – have become Triumph’s most important models once again. Sixty years after it first went on sale, the Bonnie is more convincing than ever before.