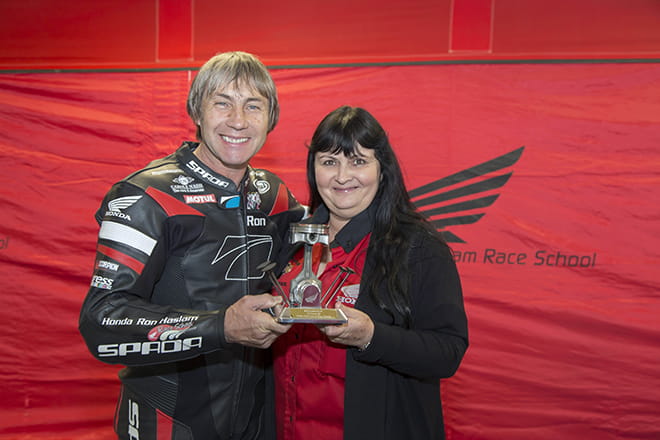 This isn’t an ordinary trophy. It’s handmade out of polished aluminium and uses the actual valves and one of the pistons from John McGuinness’ Senior TT winning Honda Fireblade that he rode to victory with a record-breaking 132.701mph lap in the TT last year.

It’s a special trophy for a special man as it’s just been handed to GP legend Ron Haslam to celebrate 20 years of the Ron Haslam Race School by the Head of Motorcycles for Honda and motorcycle fanatic, Nick Campolucci.

Ron says : “I can’t believe that I still get to do this, and ride motorcycles every day and teach people to ride faster and ride safer. How could you ever call this a job? I’m honoured to receive this from Honda and on behalf of all our customers over the last 20 years who have made the school what it is now I can’t thank them enough.” 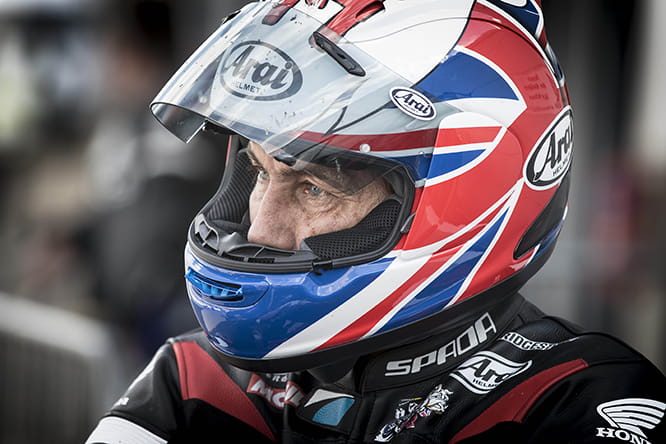 More than 70,000 people have been trained to ride faster by Ron and his crack team of top racers and despite doing more laps of Donington Park than anyone else in history, Ron can’t help himself. He’s notoriously shy around cameras and as soon as we’ve had a quick chat on video he’s off, back on a Fireblade helping somebody else ride faster and go home with a Honda-shaped smile on their face.

The school is as slick as they come and you get the feeling that on the first school day of the year, with some 75 or so brand new Fireblades, CBR600RRs and CBF125s run in on new tyres and ready for action, that the instructors are just as excited to get out in track as the pupils. 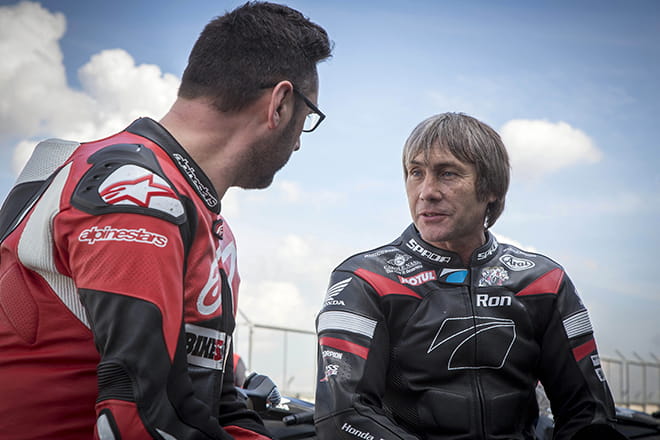 I meet my instructor, Simon Phillips, a top-flight club racer who walked his way through winning club championships on a Suzuki GSX-R1000 K6. He’s quit now, racing pushbikes instead as: “I’ve just got to race something”, but loves teaching people to ride faster round Donington Park.

But the nerves are gone as we do some work on body positioning in the pits then head out on two CBR600RR’s and follow instructor Simon on a Honda CBF1000 down pit-lane. 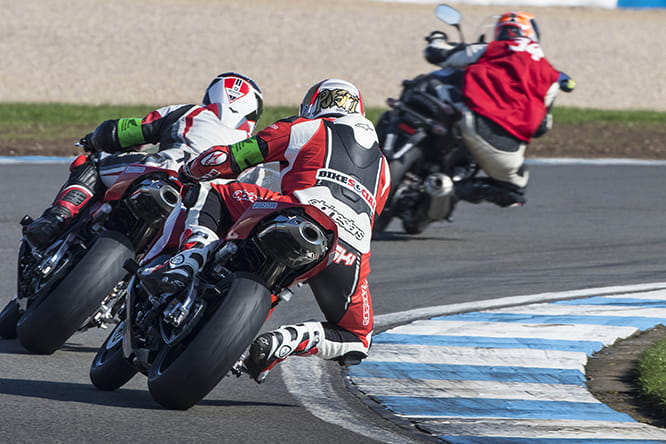 We do a steady session to blow the cobwebs off and can already see how perfect his lines are. Just sit behind, take your turn swapping places behind the leader and learn the perfect lap of Donington Park. Instructors operate a system where slower groups pull to the side of the track letting faster groups sail past safely so there’s none of that overtaking stress you get on most track days as riders try and take each other out to win invisible trophies.

David is riding well but it’s clear there’s a speed difference between us so we end up with one-to-one tuition and David heads off with another instructor.

No matter how many laps I’ve done of Donington Park you can always learn more so I tuck in behind Simon and do some more laps, trying to work on my riding position, sitting three feet off my instructor, thinking about where I brake and feeling the ABS cut-in. It’s an incredible system that Ron says you can use to brake fully hard up to the apex of the corner without the tyre sliding.

After a few pointers, a briefing to check everyone is comfortable with the track and a pet talk to say that most of our improvement will have come in t he last session and don’t rush it too much in the third and final session, yeah right… we head out. 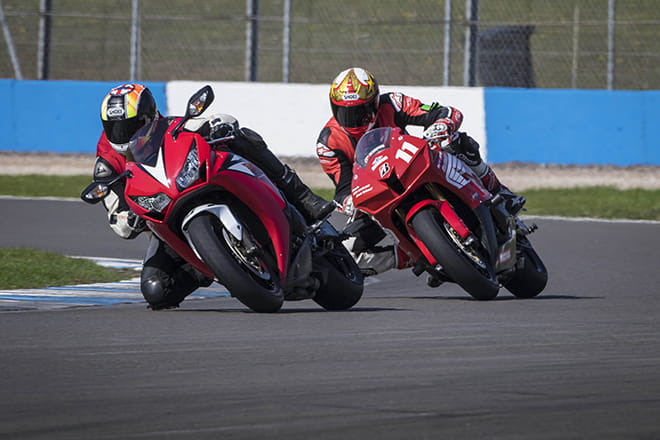 This time my instructor has a Fireblade to lead me round on, but says 95 per cent of the time the CBF1000s are fine for instructor work. We cut some faster laps and it’s great to see different lines as my instructor squares off the corners and gets the Blade fired-out of corners. It leaves the accomplished CBR600RR gasping out of corners like the Melbourne Loop and Goddards as the Blade rears off down the straight. We catch-up with David Rogers from Honda who is noticeably faster than earlier in the day. He’s on it, and you can almost see his grin through the clear visor of his Shark helmet.

Afterwards he’s beaming and almost lost for words as we’re handed certificates giving feedback on our riding and a per centage score out of 100. We won't go into the scores though! 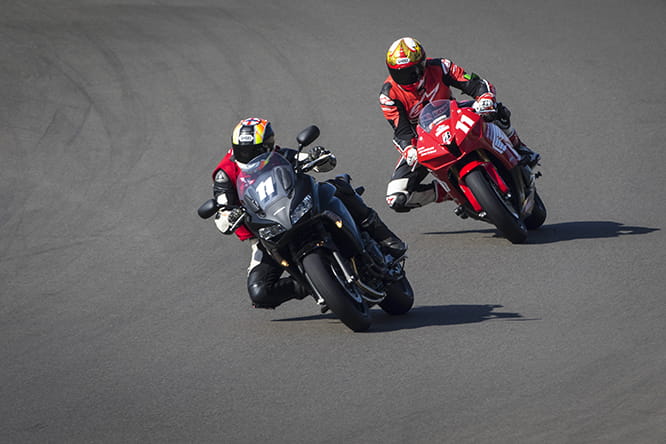 If you’re inexperienced the Ron Haslam School Premier course is the best way to get out on track with total confidence on somebody else’s bike and learn faster than you would in five track days on your own. If you’re experienced, you can never stop learning and there’s always more to pick up and make you faster and smoother. Plus, once you’ve done the Premier course on CBR600RRs you can step-up to the one-to-one Elite course on CBR1000RR Fireblades, something I plan on doing at some point this year.

Twenty years after Ron Haslam decided to teach riders to ride faster the school is still putting smiles on people’s face, let’s hope it continues for another 20 years.

Premier: Three sessions on a Honda CBR600RR around Donington Park. Price of £299 includes hire of all riding kit and bike.

Elite: 3-hours of intensive one-to-one instruction with some of the UK’s fastest racers. Price includes kit hire and use of a track-ready Honda CBR1000RR for the price of £399