You’d be forgiven for thinking that conventional sports-tourers, bikes that blend sporting excitement with a degree of long-distance comfort and versatility, were no more – but you’d be wrong. While it’s true that mature, sophisticated all-rounders such as Honda’s lamented VFR750F V4, Suzuki’s RF900 and Yamaha’s FJ1200, which were the backbone of British motorcycling in the 1990s, have largely fallen by the wayside. While, to a large degree, the surging popularity of adventure bikes such as BMW’s R1250GS, which mix distance ability with decent equipment and day-to-day ability have filled the void.

In truth, though, the traditional sports-tourer has been making something of a comeback. BMW updated its classic RS boxer as recently as 2019. Ducati also has its newly revamped 950 Supersport while Kawasaki’s best-selling Z1000SX continues to go from strength to strength. There’s many more, too.

What we haven’t included here, though, are bargain all-rounders such as Honda’s CBR650F or Kawasaki’s Ninja 650 which are more ‘first big bikes’ than genuine sports-tourers, nor hyperbikes such as Suzuki’s new Hayabusa or Kawasaki’s enduring ZZR1400 which emphasise speed over true versatility. But don’t worry, there’s still plenty of choice – so much in fact that we decided to help by picking – in ascending price order – our 10 of the best. 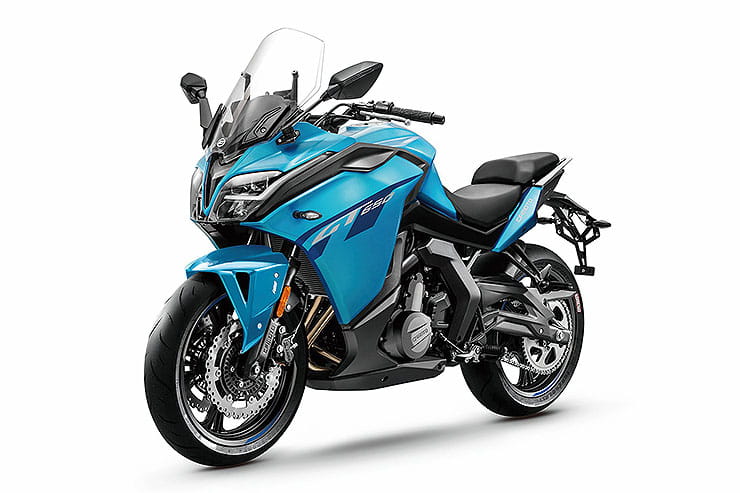 CFMoto’s family of smartly styled 650, 400 and 250 twins and singles are proof that Chinese-built bikes are finally coming of age. The CFMoto 650 GT its range-topper and, although still built down to a price and undeniably a budget offering, it’s also a reasonable performer and a great, entry-level sports-tourer. With 60bhp from its ER-6-alike parallel twin, performance is adequate rather than inspiring but there’s two power modes, it handles reasonably enough, has a plush ride, adjustable screen, LED lights, two power points and more. The panniers, however, are extra. But for under £6K it is a genuine sports-tourer and a decent introduction to the breed. 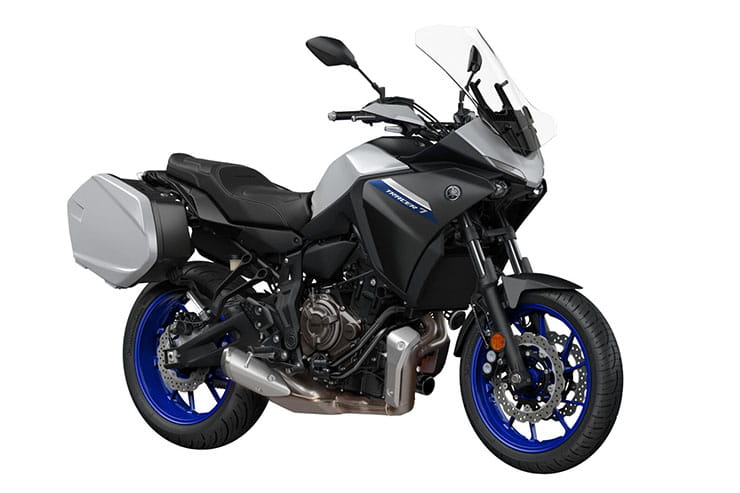 Yamaha’s Tracer duo, in 680cc twin cylinder form and bigger brother, 850cc three cylinder trim, have been Europe-wide best-sellers for their combination of value, versatility and fun ever since the first MT-09 Tracer was introduced as a spin-off of the MT-09 roadster in 2015. The Tracer 700 followed in 2016 with 74bhp, easy versatility and a punchy and fun power delivery, was face-lifted and improved for 2020 and for 2020 has been renamed as simply the Tracer 7 and made Euro5 compliant. That base version costs a still temptingly affordable £8199. Better still, however, for serious sport-touring types is the up-specced GT version which also comes with 20-litre panniers, high version of the adjustable screen and comfort seat. Larger riders or those riding two-up over long distances may prefer something more substantial, but the Tracer 7 GT is affordable, unintimidating, versatile, great fun and well-equipped, too. 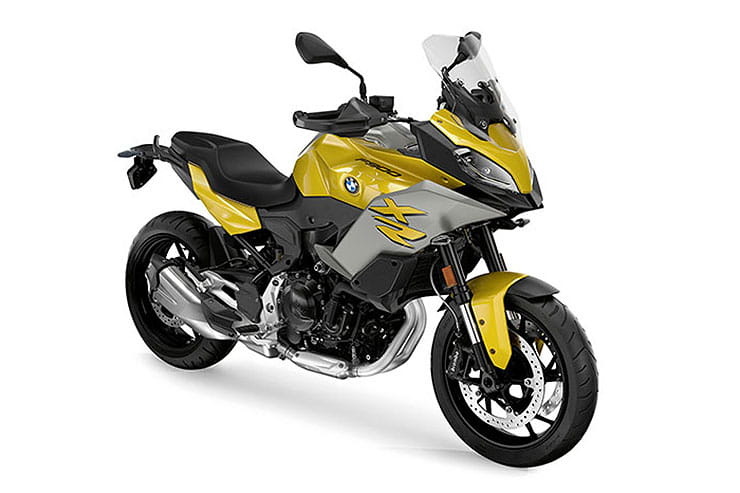 Introduced in 2020, BMW’s new ‘adventure sports’ version of its middleweight F-series, parallel twin platform has proved a surprise star as a Yamaha Tracer-style sport-tourer/all-rounder. Inspired by BMW’s larger, four-cylinder S1000XR, the F900XR has a similar, upright, adventure sports posture but with a revised and enlarged F series parallel twin producing a respectable 104bhp. Its upright gait is comfortable, its handling engaging and versatile. There’s a brilliantly adjustable screen, enough comfort and quality to make distances easy and also enough equipment, such as riding modes, to cosset – yet all for a temptingly low (for a BMW) price. And if all that isn’t enough, being a BMW also means it’s easy to load it up with extras, luggage and gizmos to make it as much of a sports tourer as you want. 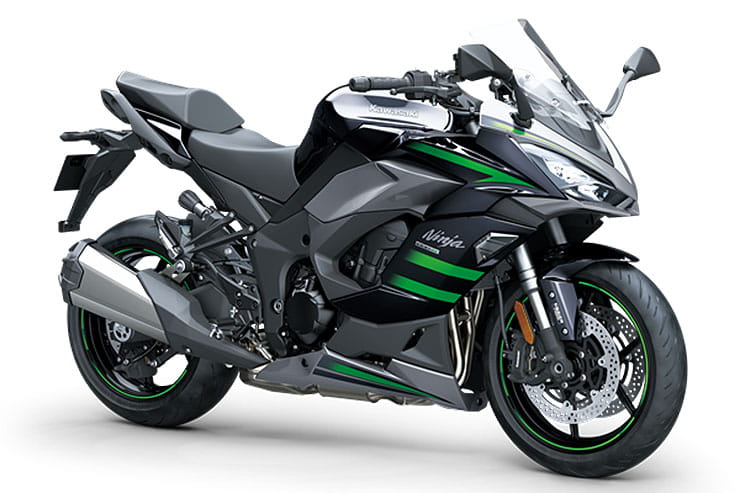 A UK best-seller due to its combination of versatility, fun and impressive value ever since it’s original introduction into the UK in 2010, the Ninja 1000 SX, on face value, is ‘only’ a Z1000 super naked with the addition of a fairing. In reality though, and partly due to a series of significant updates since, it’s so much more than that. The base, four-cylinder, 140bhp rolling chassis is lively and fun; comfort and practicality due to the fairing and slightly more upright riding position is good, and, although no longer the sub-£10K bargain it once was, it remains brilliant value. Most recently updated for Euro5 and now called the Ninja 1000 SX (the ‘Z’ prefix is now reserved for Kawasaki’s roadsters) means it’s just as good as ever. The Touring spec version pictured (with panniers, GPS bracket and tank pad), costs £12,199. 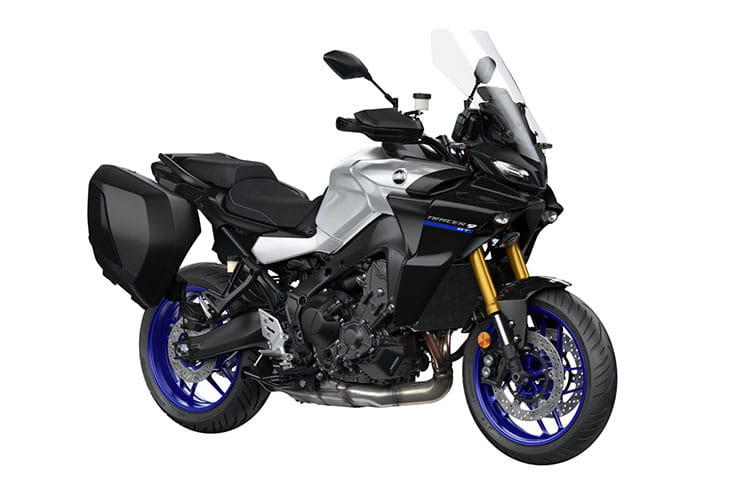 As with its little brother, the Tracer 7/700, the Tracer 9, which was called the Tracer 900 until this year, is one of the most popular sports-tourers around bike. It dates back to Yamaha’s MT-09 three-cylinder roadster of 2013, which was such a success for its purity, fun and value it spawned the more roomy, half-faired MT-09 Tracer sports-tourer in 2015. That bike immediately became a Europe-wide best seller for the comfort and versatility it added to the base package. That bike was joined by the first GT version in 2018 which gained fully adjustable suspension, TFT screen, heated grips, quick-shifter, cruise control and panniers along with improved bodywork to go with the same sweet handling, lively yet unintimidating 115bhp triple and decent value. While for 2021 it’s been significantly updated again with new styling, reworked, slightly larger, Euro5-compliant engine and more. The GT has it all. In fact the only things it conceivably lacks are the kudos and stature of some larger, more expensive machines… 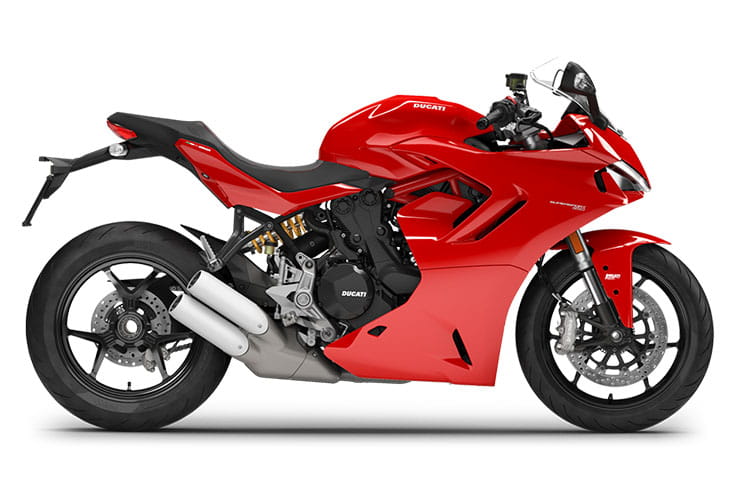 When its all-new SuperSport was introduced in 2017 it’d been a long time since Ducati had offered a street-style (ie not adventure-orientated Multistrada) sports-tourer. The underrated ST series (ST2, ST4 and ST3) was quietly dropped in 2007 while the last, previous street sports, the SS series in 600, 750, 800, 900 and 1000cc forms, met a similar fate a year earlier. But boy is it back. Based around a retuned, 113bhp version of the 939cc Hypermotard/Multistrada 950 liquid-cooled V-twin and with a slightly less full-on chassis and ergonomics, the Supersport is probably more ‘street sports’ than true, long-distance, sports-tourer. But with luggage options, sophisticated electronics and that name on the tank, for many it will be close enough. Like many other 2021 bikes it’s been updated again this year, receiving engine tweaks to adhere to Euro5 but also updated styling and improved electronics and equipment. On top of that, an S version sportier still with Ohlins suspension, quick shifter etc for £13,895. 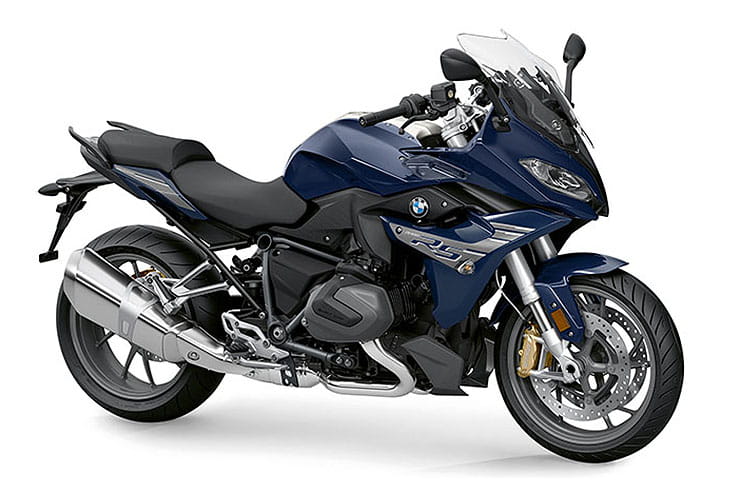 Legions of BMW boxer fans had been yearning for a capable, new RS (BM’s sports-tourer designation, highlighted by the original R100RS of 1976-1989) for years, especially since the preceding R1100/1150RS (1993), R1200ST (2005) and R1200S (2006) all failed to quite hit the mark. Finally, in 2015, and based around the German firm’s latest, liquid-cooled, 125bhp twin, it delivered. That first R1200RS was basically a R1200R roadster with a half-fairing and tweaked ergonomics yet succeeded by being much more than just the sum of its parts with real-world ‘go’ fine handling, lashings of comfort and plenty of touring practicality and accessories. That bike in 2019 was made even better still with the significantly uprated R1250RS which got the new ‘ShiftCam’ 1250 engine with a sportier 134bhp, slick new TFT dash and uprated styling including an adjustable screen. The base bike is now a brilliant all-round road machine. Load it up with BMW accessories such as panniers, heated grips and electronically-adjustable (ESA) suspension and it’s arguably the perfect road bike. 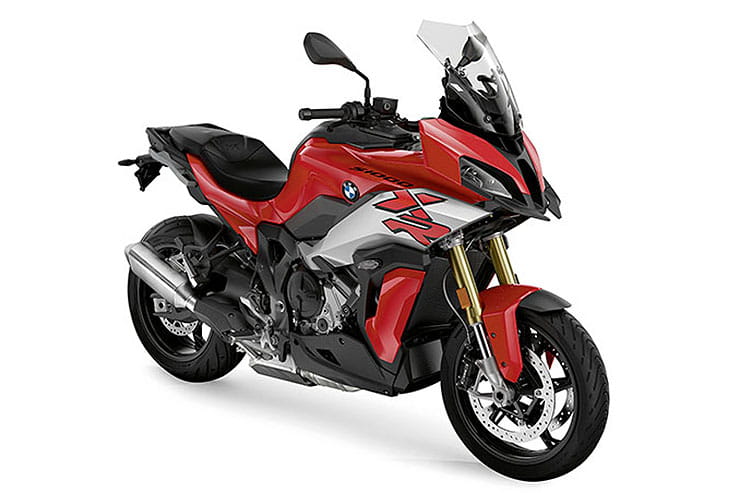 First introduced in 2015 as a sort of more upright, adventure-styled version of the S1000R super naked, the S1000XR’s gained a strong following for its mix of 160bhp sports performance, decent handling and adventure style upright comfort and touring ability. After minor revisions in 2017 it was more fully updated in 2020 with updated bodywork including an adjustable screen, new TFT dash, improved suspension and Euro5 compatibility. The result is both an astonishing performer and a truly versatile all-rounder – especially if you load it up with BMW goodies such as ESA, heated grips and quality luggage. On the downside, though, if you go for all that the price rises quite dramatically and you may end up wondering if the sub £10K F900XR doesn’t do most of that, but a whole lot cheaper. 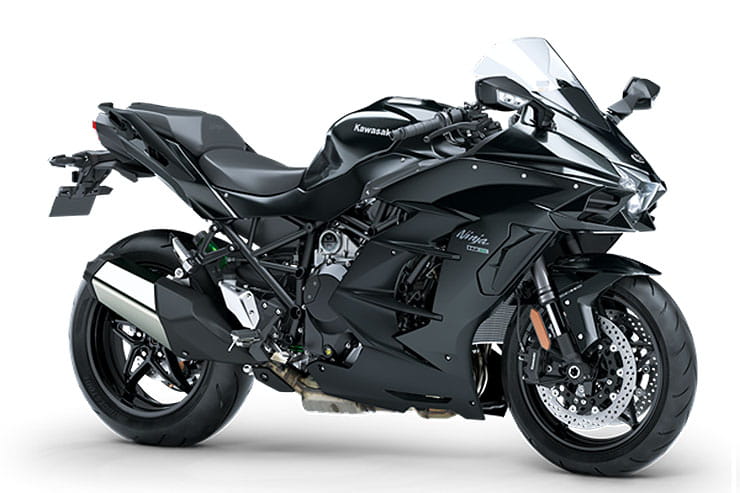 When launched in 2018, Kawasaki’s new sports-tourer version of its bonkers, supercharged H2 was arguably the most bike of its type ever built, marrying the mad cap, whistling, 197bhp performance of the H2 with the practicality of the SX. So it’s something of a surprise that, after just three years, it’ll shortly be no more, as Kawasaki aren’t updating it to meet Euro5 so when the current stock is gone, so is the SX. And that’s a shame. The unique, 999cc, supercharged four is a detuned, 200bhp version of the original and while the tubular chassis and single-sided swing arm also remind of that bike, they’ve been redesigned with practicality and two-up comfort in mind. The result is actually quite sensible: a traditional, comfy sports-tourer of the old school with decent sports handling yet brought bang up to date with modern electronics, cycle parts and tech and yet one also with a 200bhp devil on its shoulder – when the supercharger chimes in, although detuned, there are few bigger thrills in street motorcycling. And wind the throttle off and it chirps like nothing else. A hoot. One downside: although the base version is a tempting £16K, you really need the full kudos of the £19K SE with TFT screen, LED lights and more, while it’s still available. 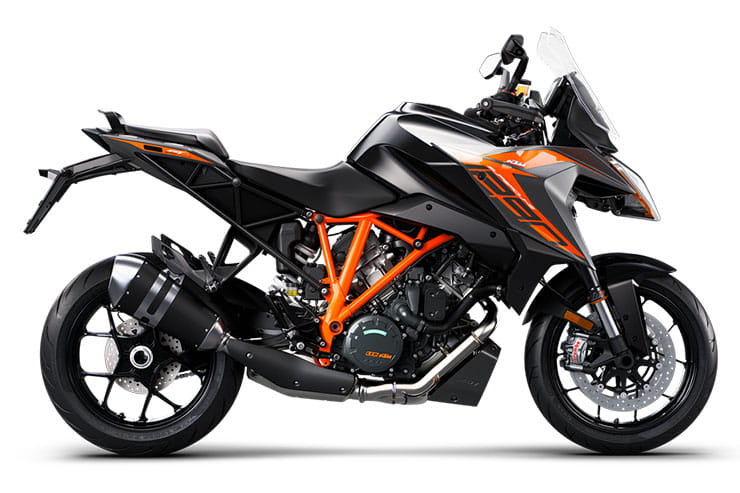 Like the Kawasaki Ninja 1000SX (and even Suzuki’s GSX-S1000F), the Super Duke GT is really a sports-tourer created out of bolting a fairing onto a super naked – in this case KTM’s completely nutty 1290 Super Duke. Being a KTM, however, things aren’t so simple, with the hooligan Austrian firm effectively throwing everything bar the kitchen sink at it in terms of spec, boosting the power to 173bhp and producing, as a result, the lariest, most high tech, hooliganistic sports-tourer around. Yet it’s also one of the best – especially since its 2019 update. Handling, performance and sophistication is second to none and glistens with WP semi-active suspension, class-leading rider aids, rider modes, cornering ABS and more. Yet although there’s only a small fairing/screen and room for small-ish panniers, it’sw also surprisingly comfortable, practical and versatile. It might lack the more quiet class and sumptuous luxury of some sports-tourers, but if you want to travel in the most dynamic, thrill-laden way possible, this is the one.