What makes the perfect adventure bike? 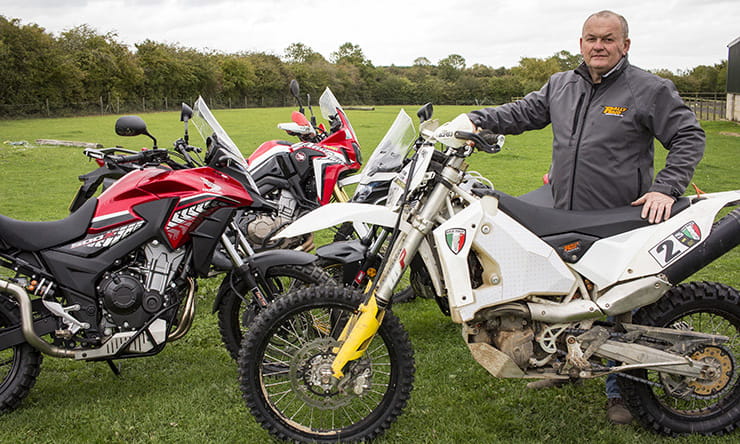 John with the KTM 690 that kick-started the business

“A great adventure bike is one you never have to think about,” says John Mitchinson, co-director of Rally Raid Products in Northamptonshire. Making parts and accessories for serious enduro and adventure riders, the company really hit the mainstream with its Honda CB500X Adventure kit – new wheels, suspension, triple clamps and pegs created a machine that adventure riders around the world embraced.

How did Rally Raid start?

“I’d been rallying for years on KTM 525s – desert rallies in Morocco, Tunisia, Croatia etc –  but back in 2011 I bought a 690. I soon realised that there were no larger fuel tanks or accessories available, so as I already had my own general engineering business, I thought I’d make my own.

“Rallying (after years of trials, enduro and motocross) was my hobby – I was lucky that I had a business that gave me access to machinery that meant I could see works bikes at an event and think ‘I could make that for my bike.’” 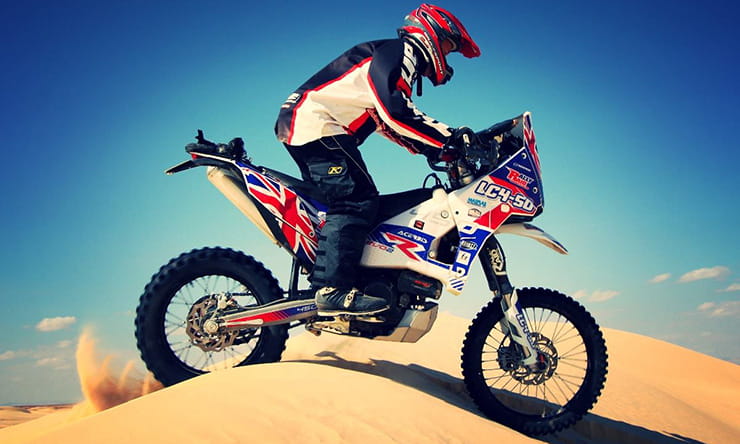 John has been competing in trials, motocross and enduro for most of his life…

“Around the time I got the 690, we’d just bought a £50,000 milling machine for the business. But then the recession started and the phone stopped ringing overnight. I had to learn how to use the machine, but I didn’t have any work.

“I decided to start making sprocket guards for the KTM690 as practice, then put them on eBay. They sold straight away! So then I made a chain guard, which sold instantly too. That was when I started to think that I might be onto something.

“I was making billet parts to start with, but then figured I’d make a set of fuel tanks. I was trained in mould-making, and our plastic moulding business isn’t dissimilar. We became one of the first companies to make after-market tanks for the 690, and that’s where it started… We went on to do fairings and more after that. After the rally kit went on sale, a few owners started asking if we’d make an adventure kit… Now the adventure side is the vast majority of our business.” 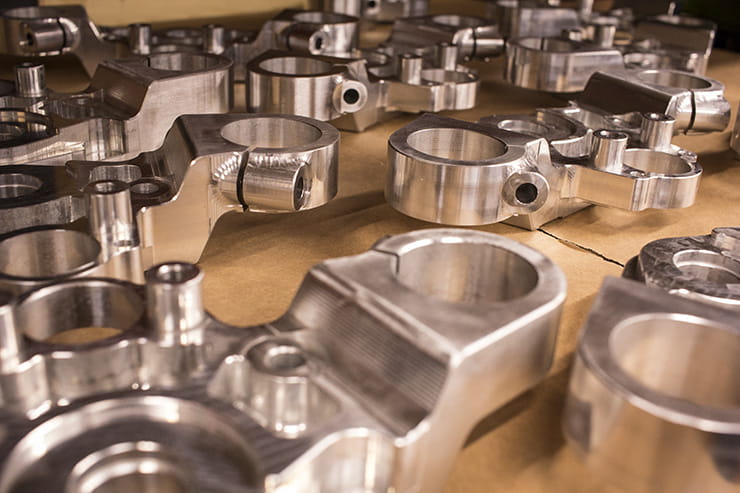 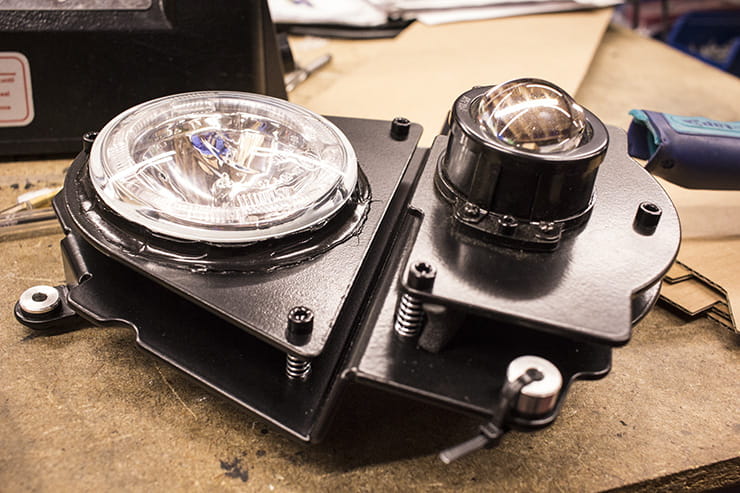 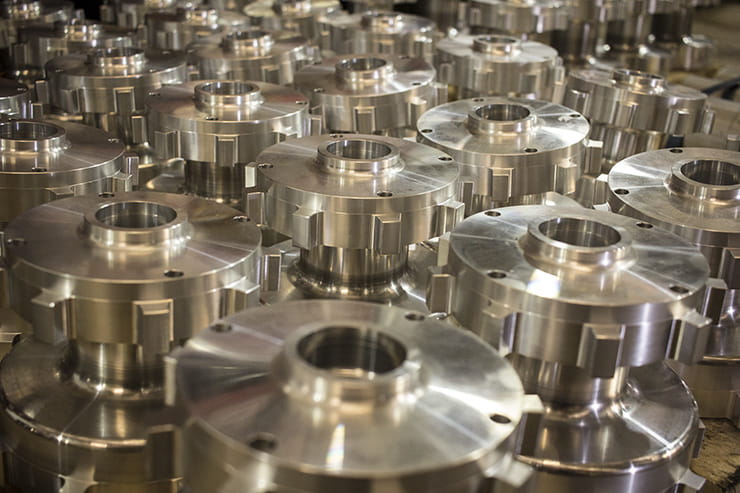 “KTM has been threatening to stop making the 690 for the last three years, but they’re still selling it, and a lot of the parts cross over to the new 701 Husqvarna anyway. Since we brought out the Honda CB500X kit though, that’s taken up about half of our business.”

What was the inspiration for the CB500X kit?

“Jenny [Morgan – British rally racer, solo-adventurer and Dakar competitor] had tried one in the US and pestered me for months about how good it could be. All I could think of was the old CB, but in the end I said I’d borrow one, just to see what the fuss was about. But she was right – it proved a really nice platform for a small, lightweight adventure bike. And that steel chassis and sub-frame is so tough it can really be loaded up.

“Once we started looking at it, we realised it just needed better, longer suspension and spoked wheels. A 17” cast front wheel isn’t ideal for off-road, so I made a one-off set of hubs then played around with different wheel sizes.

“We work with Tractive suspension in Holland – the tech guys who used to be WP before KTM bought it out – to get decent wheel travel, damping and spring rate; they’d helped us develop the shocks for the 690, and they also make all the suspension for Touratech (we’re the sales and service centre for that kit).

“We also made a new triple-clamp that allows adjustment of the bars, and the ability to use fatter Renthals.” 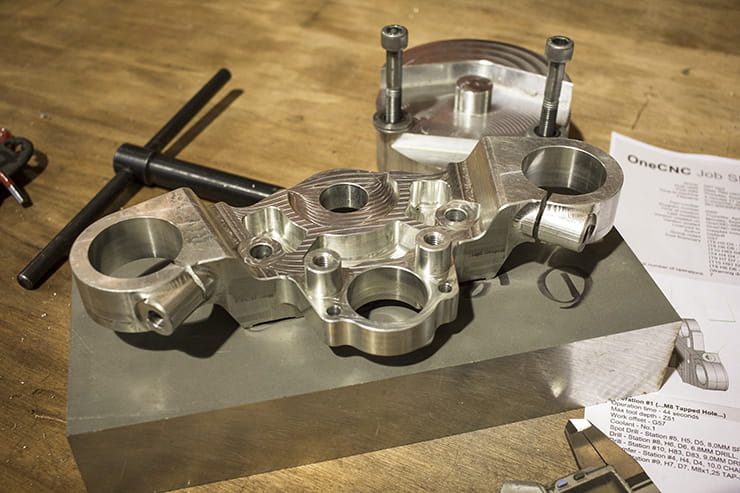 Machined from a solid billet of aluminium, Rally Raid triple clamps can increase ground clearance by dropping the forks

“Jenny had already suggested she do the Trans American Trail on a CB – I sent her all the kit, she fitted it, then she rode from southwest North Carolina to the Pacific Ocean in southwest Oregon, nearly all off-road. Then I made her ride it back again, as we couldn’t afford to pay for the flight back, and we wanted to show the machine’s reliability. I did buy her a new set of tyres though… Read her story here.

“Everything we do for the adventure bikes, we test properly in rallies. I like to test things that way – parts we make are sent to a company in Birmingham to destruction test to and compare to OE, but the best proof is in serious racing.” 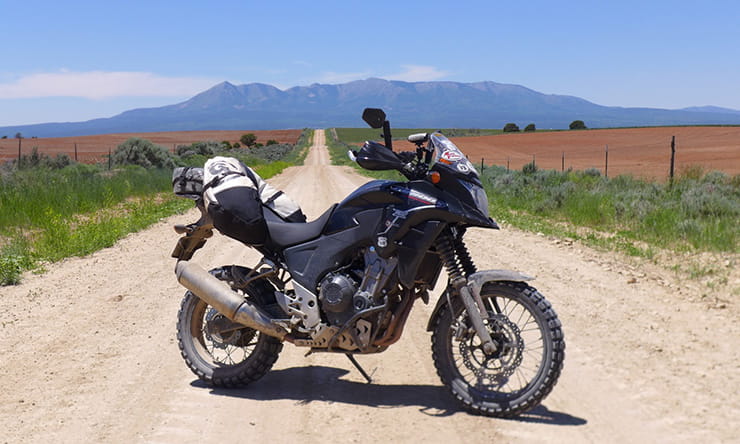 “Off road, it’s all about lack of weight, not outright power. Sure, the CB500 is heavier than a motocross bike, but that’s a different machine. When we built the CB500 kit I got so fed up with people on Facebook saying it was overweight and underpowered that in the end I took it to a ride-out at Thetford forest; I’ve raced British championship enduro there and do suspension testing so know it like the back of my hand.

There were some BMW R1200GS riders there – one of the guys came up asking about the Honda. I didn’t tell him that I own Rally Raid, and when he found out it was a 47bhp bike he said ‘I don’t know why they bothered. My GS has been chipped and makes 110bhp.’

“I rode at the back to sweep up anyone that got lost, but waited for one section of about a mile that’s really sandy and full of whoops. I let everyone through to close the gate behind them… I went past all 12 of them in that mile on the CB500, got to the gate, opened it, and sat there with my Wine Gums before they were all through!” 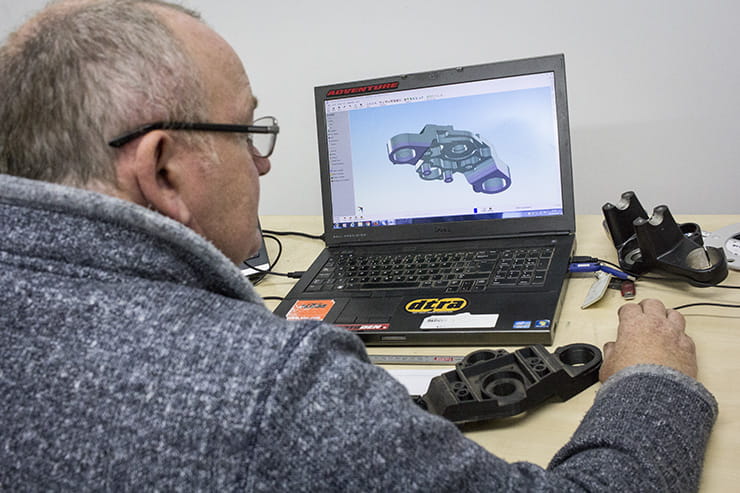 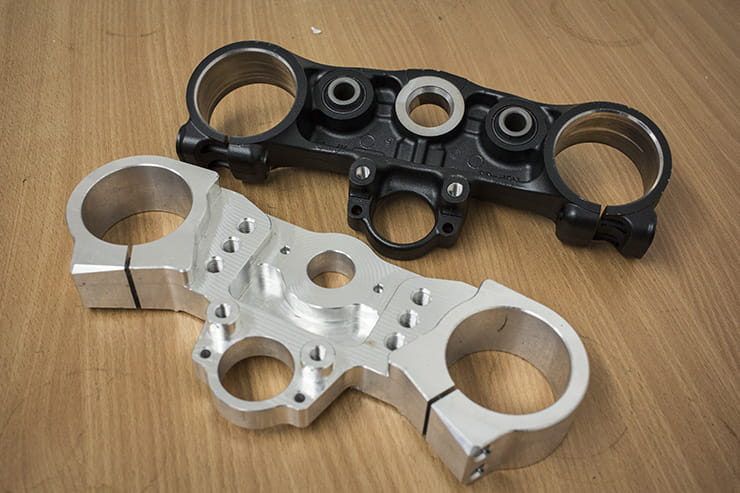 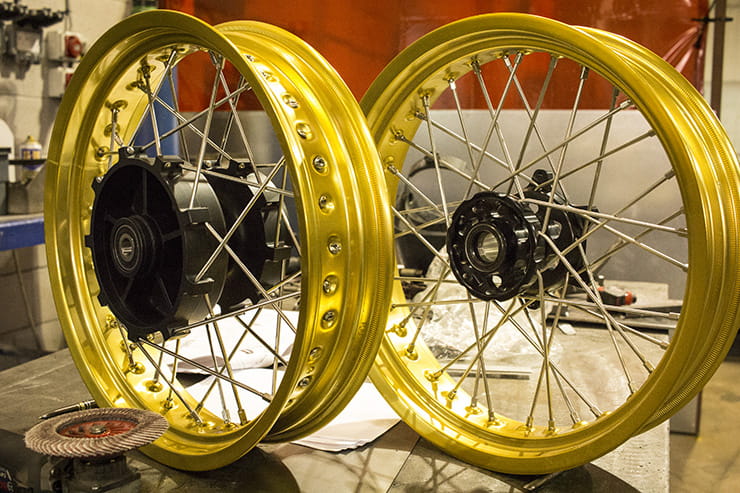 John designs the proucts to far exceed OE performance, mocks them up with a 3D printer, then puts them into production in the Northamptonshire workshop

“A lot of people that are buying the CB500s are travelling on their own and have to be able to pick them up themselves. I’d much rather be on a smaller bike that’s manageable. Plus a more compact machine is a lot easier to get through tight spaces like woodland and traffic than a big GS.

“Another reason people are choosing the CB500s is that they don’t look too flash, so they’re far less likely to get pinched. When you’re travelling, you don’t always want to attract too much attention.

“When you can go out for a ride, have a great day, and when someone asks you how the bike was you say ‘Oh, I don’t know, I never thought about it…’ that’s a good bike.”

What else are you working on?

“We have the Honda Africa Twin kit that came from our win in Croatia [read more about that here] and we’ve looked at the NC750, but the sump is really low; jack the bike up for the clearance and you lose the benefit of the low seat. We’ll probably look at the Yamaha T7 when it comes out – the concept bike looks great, but there’s no way the production version will match it.

“About a year ago I saw the new Kawasaki Versys-X 300, Suzuki V-Strom 250, Honda CRF250 Rally and the BMW G310GS… The Honda wasn’t right for me, being basically a CRF250L weighed down with more kit. The V-Strom was too little, and too underpowered, and the Kawasaki just didn’t seem to be something that was going to get much of a push in the UK.

“But being 30kg lighter than the CB500, the single-cylinder G310GS looked great, and BMW is doing a great job of promoting it. It’s also something that I think will appeal to a large audience, without distracting people who are interested in the CB500.

“I bought a G310R as I could see from the concept GS at Motorcycle Live that it had basically the same frame, swing-arm and suspension, so it gave me a chance to start prototyping – we already have the front wheel built.” 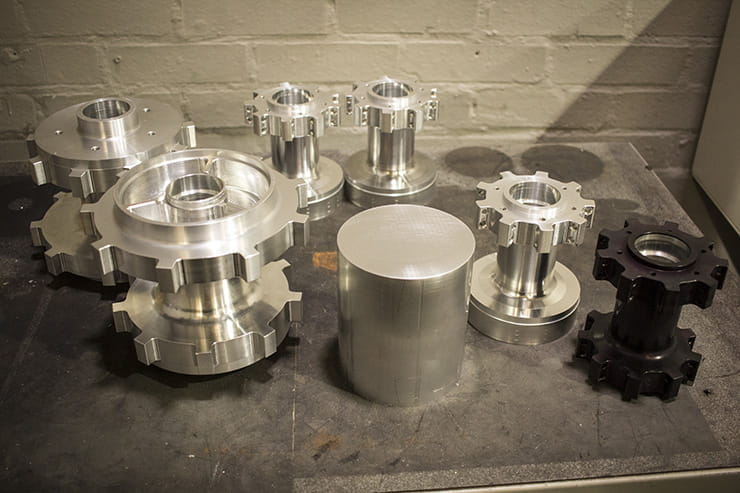 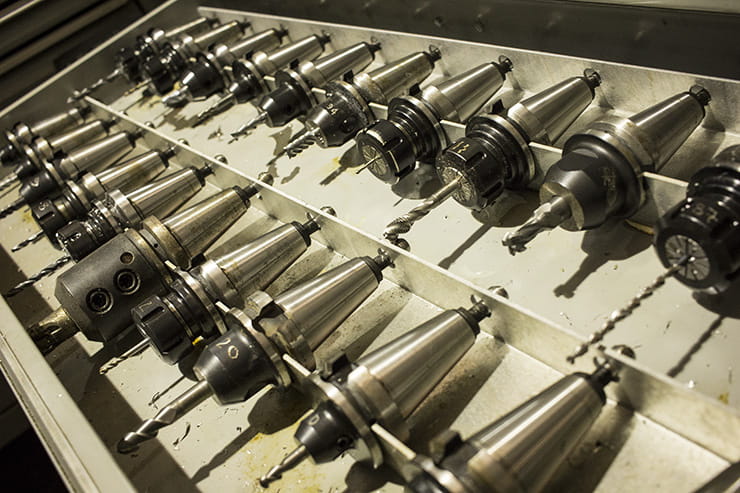 “The finished kit will fit the G310R, but most people will be buying it for the GS. It’ll have the tubed or tubeless spoked wheels [essential for off-road work as they can flex when hitting a rock or tree stump, rather than crack like an alloy], uprated fork internals and a new rear shock for more ride height (but only if the customer wants it), new billet triple-clamp for adjustability and the option of fat bars, beefier foot-pegs, soft luggage rack and a rear rack. But it’ll cost under £2000 – it has to on a machine like this.

“Next year, I’ll take our BMW G310GS to the APC rally in Australia and prove just how capable it can be…” 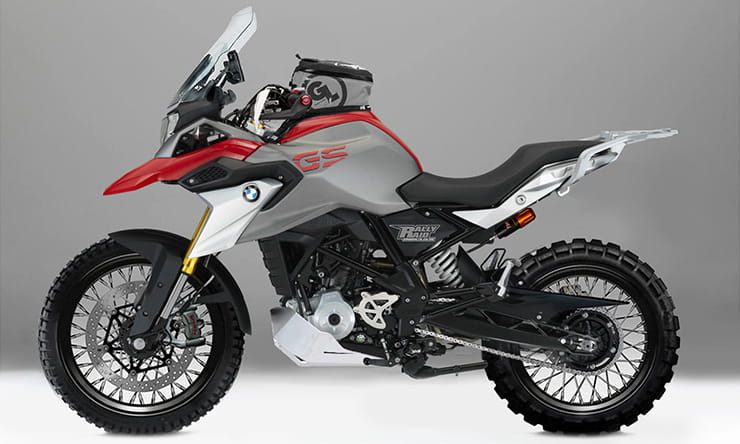 BikeSocial will be testing Rally Raid’s G310GS – shown here as a preliminary mock-up – as soon as the first prototype is available. You can find out more about the company’s products at www.rally-raidproducts.co.uk