Where are all the electric bikes?

FOR years now we’ve been hearing that electric bikes are just around the corner - a small development away from being viable alternatives to the internal combustion engined motor-velocipedes that we’ve been trundling around on for the last century or so.

But apart from a few niche brands operating near the top of the market – which seem to disappear as fast as they emerge – and a number of electric scooters barely a step above the kids’ toys you’ll find in Toys’R’Us that sell to undiscriminating commuters China, it’s a corner that we never seem to be quite ready to turn.

So where are all these electric bikes? The answer seems to be that many are lurking in the R&D departments of major manufacturers, just waiting for the right conditions to appear. The trigger point could be one of many things – the emergence of more public charging facilities, a change in the cost and supply of batteries, a new, more efficient battery technology or simply the altering whims of the buying public – but most of the world’s biggest bike firms are keen to be ready to pull the trigger on electric bike manufacture the moment it seems that it will be a profitable venture.

Let’s break them down, one by one, to see where they stand at the moment.

There’s still no question that Honda is the big dog when it comes to bike firms, and keeping an eye on its behaviour is a good way to gauge where others will go in the future. But when it comes to electric bikes, it’s something of an enigma.

As you’d expect from a firm that prides itself on R&D, and has ventures ranging from advanced robotics to executive jets, Honda has made plenty of electric bikes – over the years, dating back to the 1990s, it’s shown several prototypes and concepts using electric power, but it’s been reticent when it comes to going much further than that. Back in 2011 it put a few of its EV Neo electric scooters out on loan to customers as part of a test program, showing it’s got the technology to successfully make electric bikes, but beyond that, it’s fairly quiet. 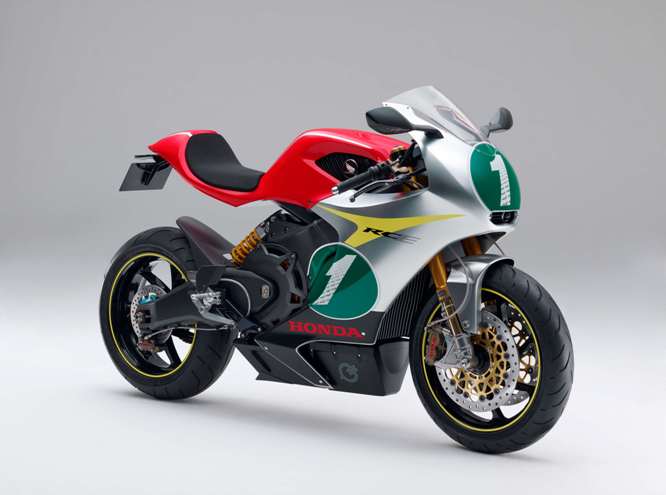 In the firm’s latest annual report, the issue raised its head again, with the statement that it now plans to put electric motorcycles on the market in Japan and China by 2017. Again, the implication is that they’ll be scooters – the report was specific in stating that the Japanese models will be leased to customers while the Chinese ones will be sold outright, hinting that the Japanese bikes will be quite different, and probably much more high-tech, compared to the Chinese ones.

So, not much to get excited about here? Well, perhaps not, but bear in mind that Honda has extremely close links with Mugen, winner of the TT Zero with its Shinden electric superbike, and that it teased us all with the RCE concept at the 2011 Tokyo Motor Show.  As recently as this year Honda has patented designs for an electric sports bike that could be linked to either or both of these, so it’s likely that as and when electric bikes hit the mainstream, Honda will be right in there. 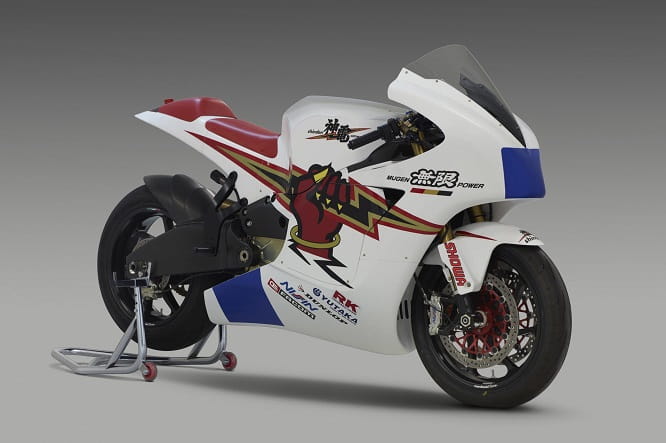 Honda isn’t the only firm that has laid out plans in its annual reports that include deadlines for having electric bikes in production – Yamaha’s schedule is to have them on sale next year.

The firm’s annual report in April 2014 said it was “working to create new value with EV sports motorcycles, which we aim to launch in two years, with the development of the small, on-road sports PES1, as well as the PED1, which are being developed to expand the scope of electric vehicles to the off-road world. In addition to the advantages of being electrically powered, these motorcycles will offer the operability expected by existing motorcycle fans, together with a new riding experience.”

That’s pretty clear cut. Presuming that the bikes are based on the PES1 and PED1 concepts, as stated, they’ll be lightweight models sharing the same centre section, including the same brushless DC motor and lithium ion battery pack, but with different suspension and styling to create the sports (PES1) and off-road (PED1) versions. Both are supposed to weigh under 100kg. 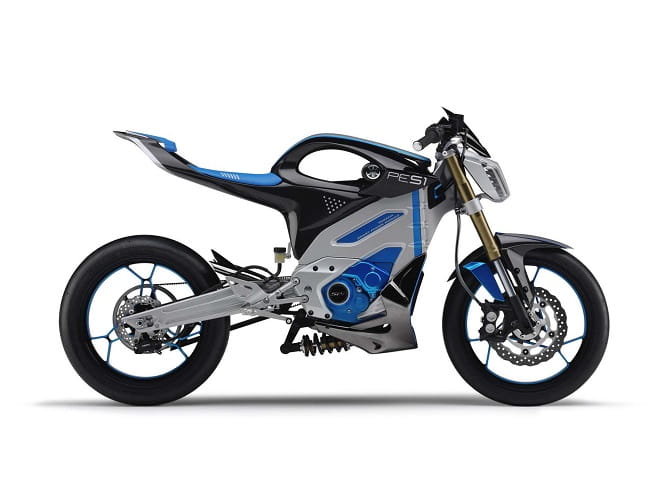 This year, patents have revealed variations on the PES1/PED1 theme, in particular the battery packs which are ‘hot-swap’ designs – looking for all the world like Samsonite suitcases, complete with a handle – that can be pulled out and replaced with a fresh one whenever the charge runs low. A modular chassis design revealed in the patents means that versions can be offered that use one, two or three of these batteries, clearly influencing range and performance.

And remember, Yamaha is a leading manufacturer of electrically-assisted bicycles already, so perhaps has a slight advantage when it comes to some of the technology and production facilities needed for electric motorcycles.

There hasn’t been much talk about electric bikes at Kawasaki – with the exception of the weird ‘J’ concept at the 2013 Tokyo Motor Show – but the firm’s behind-the-scenes work means it might well be one of the leaders in the electric bike market.

Just like its rivals, Kawasaki has patented several electric bike designs, including one very well developed set of plans showing a simple trellis-framed sports bike – similar in size to the Ninja 300 – with an electric motor and battery pack unit mounted in a chassis that’s designed to allow for relatively simple battery swaps. 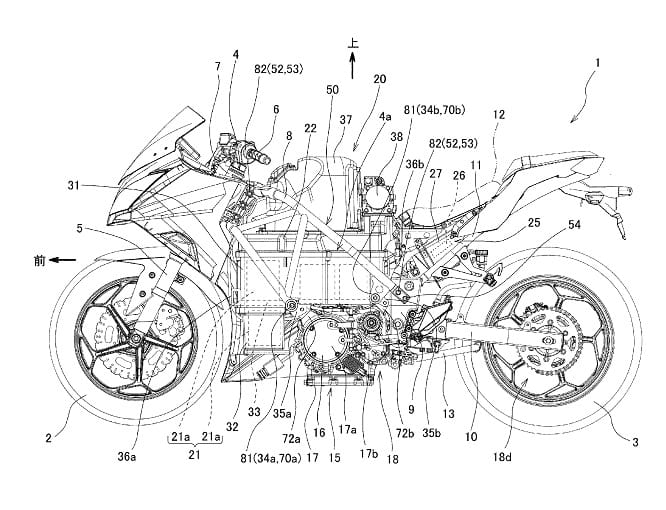 The trellis frame gives the design something of a link to the H2 supercharged superbike, and when Kawasaki launches its first electric offering it might well be in a similar way to the H2 – easing its way into the market with a low-volume bike that gains plenty of publicity before spreading the technology more widely across its range. It’s unlikely to be coincidence that the firm has applied for trademarks in Japan on the names ‘E2’ and ‘E2R’ – mimicking what it’s already done with the H2 and H2R.

The next Tokyo Motor Show is this autumn. We wouldn’t be surprised to see an E2 – perhaps as a concept if not a production model – at that event.

Suzuki has had a long history of playing with electric bike ideas and has been a particularly ardent supporter of the hydrogen fuel cell in the past. 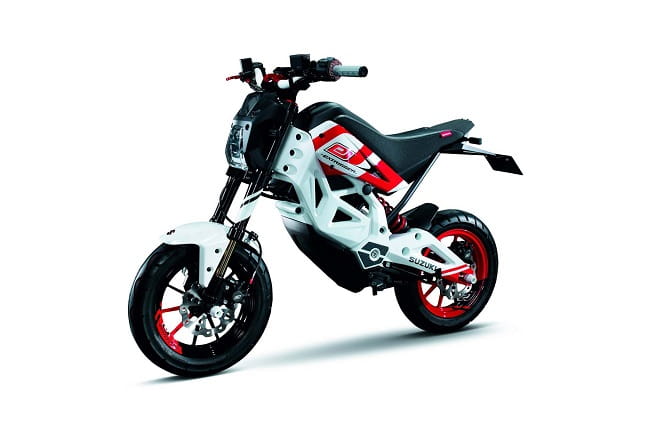 But mainstream production of fuel cell vehicles is still some way off, if only because there’s no existing network of hydrogen filling stations to replenish their fuel cells (which work by chemically turning hydrogen into electricity, meaning they can be quickly refilled rather than slowly recharged like a battery). So in the nearer term any electric Suzuki production machine is likely to be battery powered.

The most likely candidate at the moment is a version of the Extrigger concept – an electric mini-bike aimed at the leisure market, revealed a couple of years ago. While intended purely as a fun machine, a production version (which might be on the cards, since the firm has patented much of the technology in the Extrigger) might also work well as a short-range inner-city commuter.

Unlike most of the firms listed here, BMW already has an electric production bike in the form of its C Evolution scooter.

While its £13,500 price means sales aren’t exactly stratospheric, the 48bhp machine, with a 60mile range, is a handy proof-of-concept, and even though it’s only being made in relatively small numbers BMW is gaining useful knowledge through producing it. 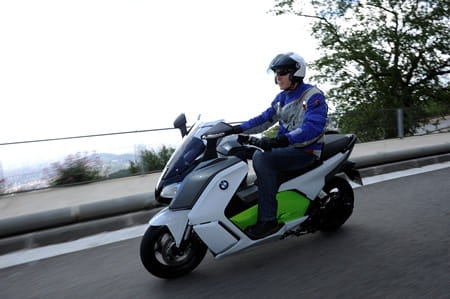 If experience with electric cars is anything to go by (and BMW is gaining plenty of that, too) electric bike range and performance is likely to improve hand over fist as the makers work out the wrinkles in their designs, so BMW’s learning process might well pay dividends in the future.

In terms of those future plans, there’s not a lot to go on but the firm has patented fascinating designs for a twin-motor electric bike that features its motors sticking out each side, visually aping the appearance of the firm’s boxer twin engines. Given that the engine configuration is so central to a motorcycle’s feel, could this be a step towards creating a characterful electric motorcycle? The use of two smaller motors instead of one large one could lead to a noticeable change in the feel and power delivery, and the firm’s patents suggest it might also give an improvement in range by allowing the bike to switch to a single motor when full power isn’t required.

Harley’s ‘Project Livewire’ is an impressive prototype for a future electric H-D but at the moment the firm is still far more focussed on its ‘core’ models than on branching out into the unknown with a full-production electric bike. 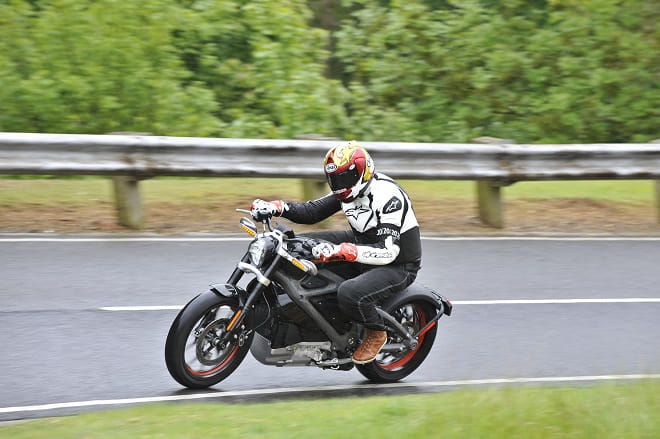 The Livewire experience won’t go to waste, since H-D intends to keep working on the idea, but you’re not likely to be able to walk into a Harley dealer and ride out on an electric bike any time this side of 2020.

While Harley’s self-built electric bike is still years away, rival Victory’s buyout of existing small-scale electric bike builder Brammo means it’s been able to launch its own electric production model without going through any of that boring R&D stuff.

OK, so the Victory Empulse TT is basically the same machine as the old Brammo, with a few tweaks and a new badge, but it’s still an electric production bike and that’s more than most of its rivals can claim to offer. It even managed to grab a podium at the TT Zero, and how many bike firms can claim to have done that at their first attempt?

With the might of Polaris (Victory and Indian’s parent firm) behind it, we can expect far more development on the Empulse over the coming years, along with more electric models. Victory has already trademarked the name ‘Charger’ for a future electric bike.

Another firm with an electric bike already in production, the Freeride E (in SX, EX and SM forms), there’s little news of other developments at the moment but surely KTM is well placed to make more derivatives in the future. How about an electric Duke or RC, for instance? Don’t rule it out. 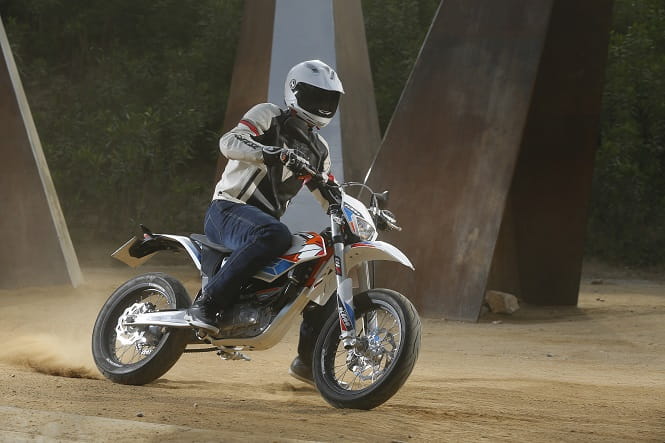 Notoriously secretive, Triumph is known to have done some in-depth examination of the electric bike market including surveying existing and potential buyers about their desires from such a machine. However, the indications are that, for now, the British firm has opted to steer clear of electrics and allow others to feel the way – and suffer the pitfalls – as the market develops.

Like Triumph, Ducati appears to be keeping a weather eye on the electric bike market rather than rushing in. Unlike Triumph it’s got a massive automotive parent firm, in the form of Audi (and the even bigger VW Groups as a whole) to draw upon as and when it decides there’s a need for electric power. Audi has already developed several electric car prototypes, and its multiple Le Mans winning machines use electric hybrid systems to help them, so its got no shortage of experience in the field. If a market emerges for an electric Ducati, the firm is sure to oblige, but at the moment there’s little sign of that market appearing.

Have you ridden an electric bike yet? What are the limitations?  or