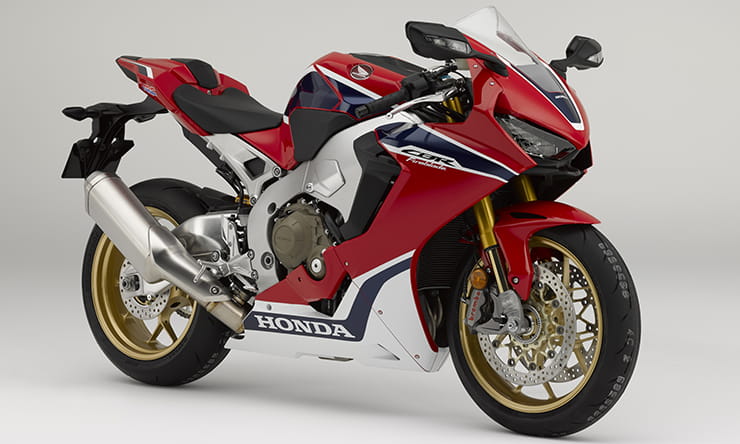 BikeSocial is at the world press launch of the new-for-2017 Honda Fireblade this weekend, but what has been so great about the Fireblade so far. To mark the introduction of the new bike, as well as the model's 25th anniversary, we revisit every version of the iconic 'Blade to date.

CBR900RR-N/P FireBlade - ‘The original round eye’

The first FireBlade debuted in 1992 and was a true game changer. Developed by Tadao Baba and his team, the revolutionary concept was to beat Honda’s own RVF750 on track by being the lightest and most compact bike in its class. Developed initially as a 750, displacement of the in-line four was increased to 893cc while retaining 600-class proportions of a 1405mm wheelbase and 185kg dry weight. The result? EXUP and GSX-R11-annihilating acceleration and handling. Today, first generation ‘Blades are appreciating classics.

Did you know? The FireBlade name was actually a mistake – a mistranslation into English from the intended Japanese name of ‘Lightning’.

Two years on from the launch of the original, Honda gave the hugely successful ‘Blade it’s first update, the most obvious being a new front cowling containing a revised twin headlamp design which quickly gave rise to the new machine’s nickname – the ‘Foxeye’. It wasn’t the only update, however: the engine was uprated slightly raising power by 2bhp; the cylinder head cover changed from aluminium to magnesium and, in a bid to contain, slightly, the original’s lively front end (a consequence mostly of its explosive performance combined with stubby dimensions and an unusual 16-inch front wheel where the class norm by then was for 17-inchers) Honda also added a compression damping adjuster to the front forks.

Did you know? Mk. II’s ‘Urban Tiger’ paint option is the most popular of all FireBlade colourschemes

For its third incarnation, the Blade again may have been more powerful and lighter, but for some it lost a little of its ‘edge’, too. A 1mm larger bore took capacity to 918cc helping raise output to 128bhp. At the same time, a new, lighter stainless exhaust combined with a reshaped tank (which eliminated the need for a fuel pump) help cut weight to 183kg. Finally, along with the slightly reshaped tank there was a new seat unit, the most obvious visual giveaway being the shift to two air vents from one each side. This, along with the tank, meant the riding position was altered slightly as well, being more upright, roomy and, well, soft almost…

Did you know? Both bars and seat were 10mm higher than before

CBR900RR-W/X FireBlade - overshadowed by the R1

The fourth generation ‘Blade saw the biggest changes yet but all of it was overshadowed by 1998’s simultaneous launch of Yamaha’s all-new R1. Just like the original 'Blade in 1992, the 150bhp R1 set new standards for power, lightness and agility, finally usurping Honda’s game changer.

That said, the ‘Blade itself received its biggest changes so far that year, too. But despite 2bhp more power and even less weight, next to the R1 it was almost a sports tourer, being roomy, comfortable and practical. It was time for the Blade to go back to basics. Today this variant, for those very reasons, is both the least desirable (and thus most affordable) and most practical of all ‘Blades.

Did you know? Honda claimed 80% of the parts on this version were new

Following the success of the R1 and relative failure of the W, Baba’s team were galvanized into action and created a virtually all-new ‘Blade which was intended to return to the core values of the original and wrest its crown back from Yamaha.

It very nearly did just that, too. There was an all-new 929cc engine, which was now also fuel-injected. A clever chassis saw the swing-arm bolted directly onto the back of the engine cases. The 16-inch front wheel was finally replaced by a 17-er. There was sharp, new styling, sharper handling and weight was down significantly, too, partly thanks to a titanium exhaust and part-titanium silencer.

Did you know? This was the first ‘Blade to have a ‘conventional’ 17-inch front wheel.

With the 929 coming so close to the R1 Baba’s team must have been confident its next update – the sixth – would finally reclaim top spot. Unfortunately for Honda, Suzuki by then had come out with the first GSX-R1000 which itself shook up the class.

That shouldn’t take away, however, from the fact that the 954, as it is now known, is also now considered one of the best ‘Blades of all. An extra 1mm on the bore took capacity to 954cc and power up again; road handling, though sharp, was considered the best in the class; the styling was handsome and there was typical Honda class and refinement everywhere. The 954 may not have been outright top dog, but it was – and still is – the thinking man’s superbike.

Did you know? The last 'Blade to have its design overseen by Tadao Baba before his retirement.

With Baba no longer at the helm, Honda turned to its racing arm, HRC, for the creation of the next generation of ‘Blade. They in turn, inspired by Honda’s new, dominant, four-stroke MotoGP machine, the RCV211V, and, seeing the need to create a bike which would compete in the Superbike World Championship under the new 1000cc four-cylinder regulations, took the opportunity to create an all-new bike. The result mimicked the styling of the RCV, complete with angular fairing and underseat exhaust, had an all-new 998cc engine, new, die-cast frame, ‘Unit Pro-Link’ rear suspension, an electronic steering damper and, for the first time, radially-mounted brake calipers. Trouble was, though brilliant, against Kawasaki’s all-new ZX-10R and Yamaha’s new underseat pipe R1, the Honda failed to sparkle as brightly as it could have done.

Did you know? This was the first CBR1000RR and the first Fireblade (as opposed to FireBlade), done as a sign of respect to the departed Baba.

Although at first glance looking very similar to the previous machine, the eighth generation ‘Blade was actually significantly different and much more refined. Engine mods included new porting and different valves to boost torque and raise power by 3bhp, larger discs added braking power while the bodywork, though broadly similar to before, was actually all new, sleeker and more refined. As a road bike it was absolutely brilliant, on track though it still couldn’t match the latest from its Japanese rivals. Today this variant, due to its refined ride, classy build and classic, handsome good looks, is considered one of the best of the breed and remains in demand.

Did you know? The only model of the ‘Blade to win a world superbike title – with James Toseland in 2007.

All-new model launched in 2008 which ditched the RCV-alike underseat exhaust and received more controversial, bulbous looks that weren’t universally well received. As a road bike, though, it performed brilliantly. Lighter and more agile than ever while the new motor boasted 175bhp and a sublime, elastic delivery.

In 2009, although outwardly similar, this version of the ‘Blade was improved further with the addition of sophisticated ‘Combined-ABS’ brakes while in 2010 it received subtle mods such as a lighter flywheel and more compact radiator fan motor. By now, however, although still a great road bike, the ‘Blade had fallen far behind new class leaders such as BMW’s S1000RR.

Did you know? This ninth generation ‘Blade was the first to use monobloc brake calipers.

Effectively an update of the 2008 machine rather than an all-new bike, the 2012 'Blade, launched to mark the 20th anniversary of the model, received a host of improvements, not least a face-lifted nose. Other mods included: revised front and rear suspension including new ‘Big Piston’ forks; more lightweight 12-spoke wheels and a new LCD dash. None of it, however, not even the introduction of an Ohlins-equipped ‘SP’ version in 2014, was enough to keep up with the latest ZX-10R, S1000RR and, in 2015, Yamaha’s all-new YZF-R1 which is partly why, belatedly, we’ve finally got an all-new ‘Blade for 2017.

Did you know? SP version was first production Honda to be equipped with Brembo brakes.

For years Honda’s CBR1000RR has been the go-to superbike for riders wanting smooth, civilised performance and stereotypical Japanese reliability rather than out-and-out brute performance. But that’s all changing for 2020 as Honda is taking the Fireblade back to its roots with an all-new design that offers more horsepower than any of its direct rivals. Read our Honda CBR1000RR-R Fireblade SP Review here.