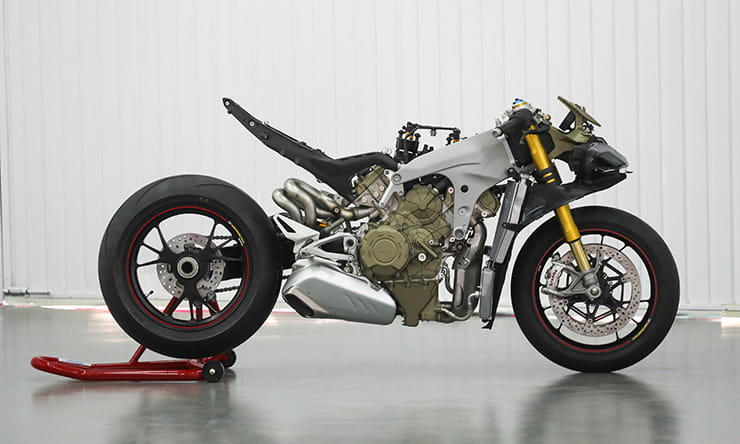 While it’s easy to become wooed by whopping power and torque figures or even the number of cylinders of the brand-new Ducati hyperbike, its new MotoGP-inspired Desmocedici Stradale 90-degree V4 hides a handful of other, slightly less sexy, secrets to its success.

Not only have the Italians spent the last 14 years racing a V4 in MotoGP but they’ve used that knowhow to finally give us the road-going version and at the recent international press test we spoke to Marco Sairu, Ducati’s Head of Engine Project Management, to understand how much effort went into the developing the 1103cc motor? 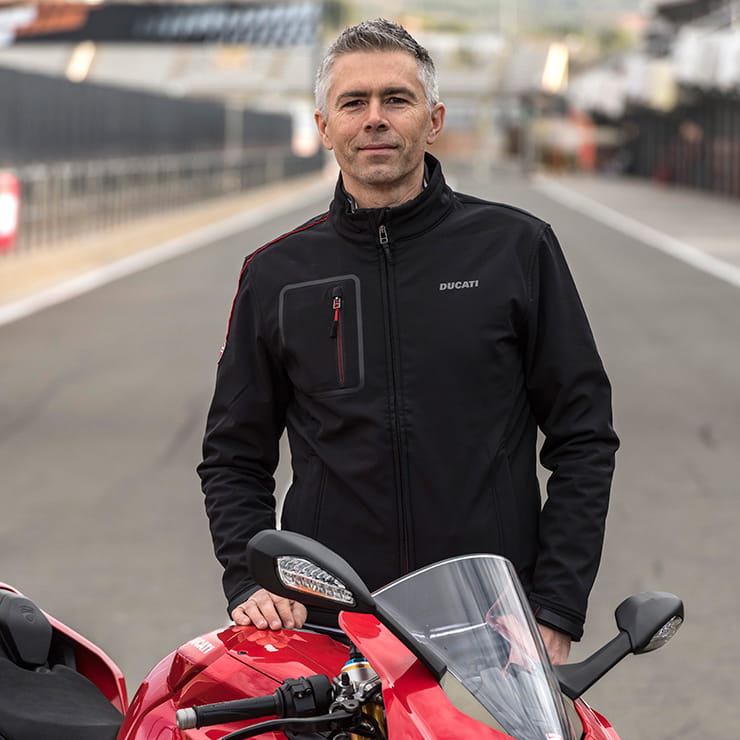 The new engine uses cam chains instead of belts – why? What are the benefits?

In the other applications of the twins, as it is for the Testastretta DVT, we can use belts because the forces and torque momentum we have on the camshaft can still stand with the belt which is lightweight, reliable and silent. But as soon as you go up in terms of performance requested for the valve train, the belt cannot stand any more so you need to move to the chain; it’s a matter of speed and load.

The chain is reliable now, there have been chains developed for the automotive industry which are quite silent so it’s a good application for these engines. In racing, they are using gears instead of chains or belts because they want them to be more extreme and they can work without any constraints in terms of homologation. 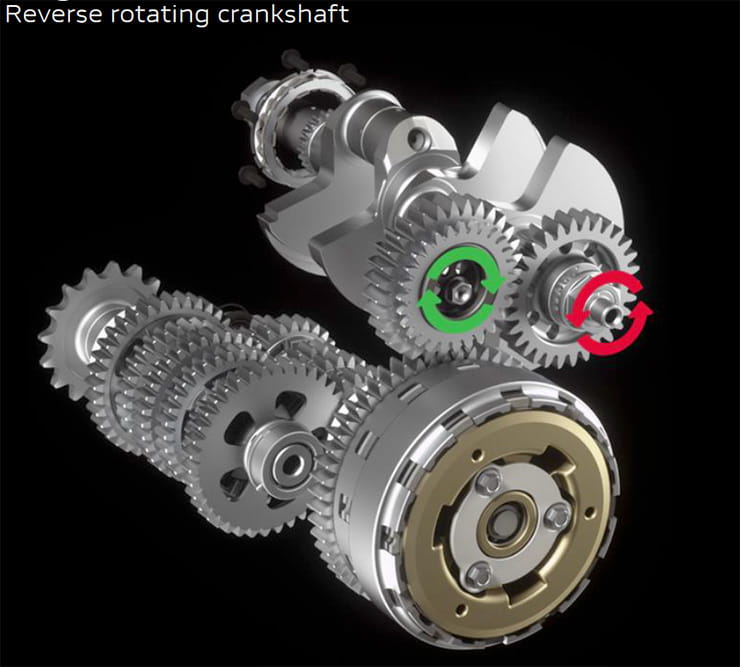 What are the benefits of a counter rotating crankshaft?

A reverse rotating crank is something quite special and comes from our MotoGP experience and basically having the shaft rotating in the opposite direction to the wheels, the gyroscopic effect of the wheels is partially compensated by the crank. So, it gives the bike more agility and nimble effect, a similar experience you can enjoy by moving from aluminium alloy rims to Magnesium rims by taking out some weight.

In this case, it’s super effective. With the counter rotating/reverse rotating crankshaft you are playing with physics because the shaft is revving really high and so the gyroscopic effect is significant and it works by decreasing the effect of the wheels so it’s easier to lean the bike or, from a lean position, to get the bike back up quicker.

The technology comes from MotoGP and I believe all the MotoGP teams are using this kind of application and feature because it has a significant effect. We consider the benefit could be significant enough to compensate also the effect where we are adding some components because once you have a reverse rotating shaft you need to add an extra gear in order to let the wheels spin in the right direction. We were trying to avoid any extra weight but the positive effects were better than the negative ones. 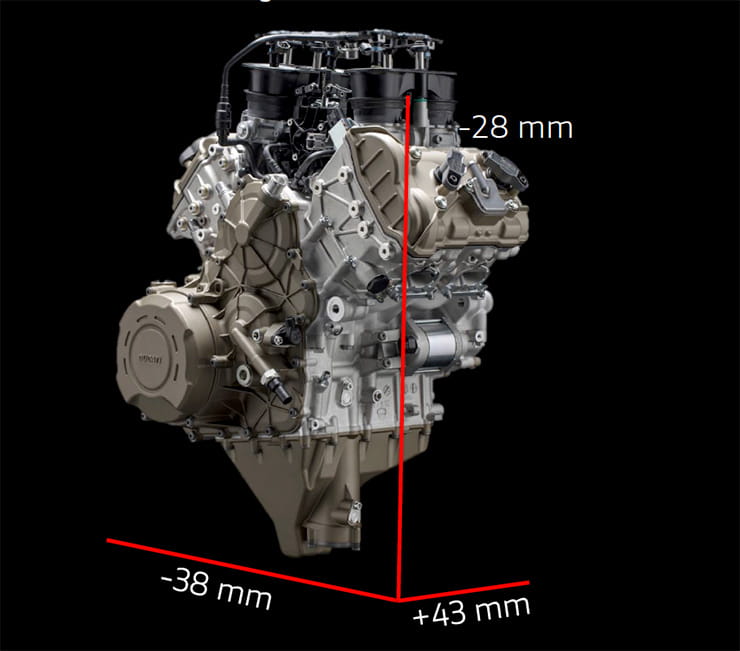 The piston has an 81mm bore, same as your MotoGP Desmocedici. Did you ever consider increasing this for the V4? Would there be any benefit?

There could be a benefit in a race attitude because the larger the bore, the higher you can rev. But we wanted a different balance for this engine so 81mm was fine for the power target we had in mind. Then we focused our attention on the stroke and the torque ability; we wanted to have a high revving V4 but keeping the same feeling of our twin with its torque behaviours and the capability to bring you out of the corner with a great push which was one of the main attentions of the project.

What materials are the components in the engine made from?

The shaft, gears and conrod are made from steel, special alloys. The pistons are aluminium – a special alloy which has copper content which is typical for race application but we had a chance to use this type of technology for our street legal applications for a long time because we are quite extreme in terms of piston bore, so we require special materials to enable us to create a part that is resistant, stiff but lightweight. We have magnesium covers which can be recognised by their different colours. The blocks and cylinder heads are aluminium too. 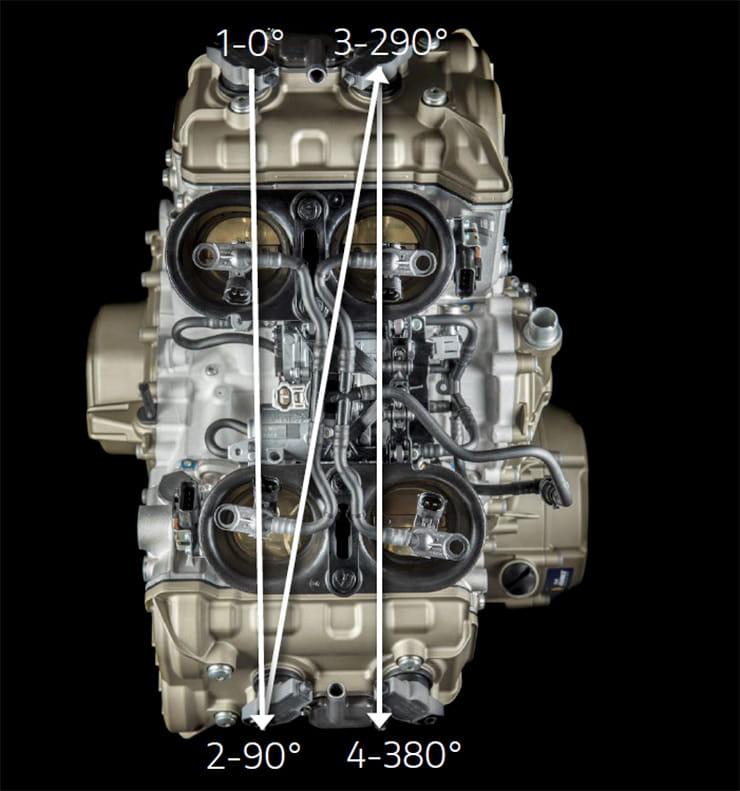 At 64.9kg, the engine is only 2.2kg heavier than the L-twin in the 1299 Panigale. It has been rotated backwards by 42-degrees, placed in the optimal position within the chassis and is used as a structural part of the chassis (‘stress member’).

By being a road-focused engine built for durability, the standard Desmo Service intervals are at 15,000 miles, the same as the 1299 Panigale.