My winter with a legend: Honda C90 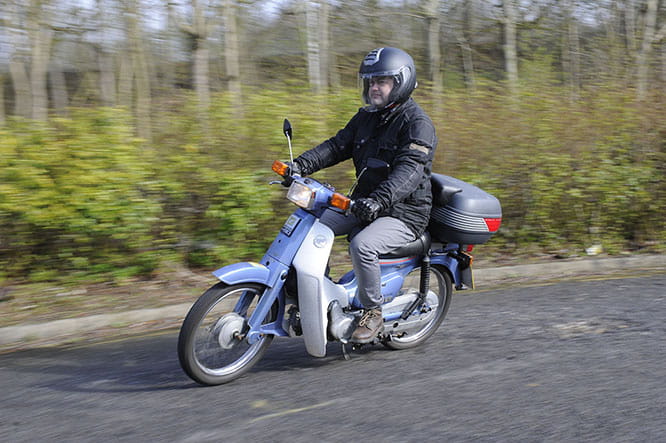 Me and damn eBay. I’ve already got garage full of bikes, some of which actually work, so the fact that I found myself trying to make space for a 1997 Honda C90 with a comedy oversized top box probably shouldn’t be a surprise to me any more.

Chop it, race it, ride around Britain on a middle aged tour with it. All these ideas ran through my mind as I prepared to hand over £800 in used bank notes. In the end I couldn’t decide, so I just rode it. Like it was meant to be. To work.

In fairness, I actually had a bit of a plan. With a regular commute down to London, I needed a simple bike that I could park up at the train station a couple of days a week over the winter months. The Cub fitted the bill nicely and, I figured, I’d always get my money back if I wanted to sell it again.

Surprisingly I’d never ridden a Honda Cub in all my years of riding and the first experience was frankly terrifying. It’s probably the scariest thing I’ve ever ridden. Ok, so it only puts out an (alleged) 8bhp, but those (three) gears are the wrong way around (all down) and cornering is a unique experience due to leading link forks that rise under braking and unsettle the bike going into the turns.

But after a week of riding I fell in love. It’s a semi auto with the weediest of weedy brakes and the heel and toe gearchange takes some getting used to, especially when you hit a speed bump and inadvertently knock it down a cog. That’s almost ended in a crash more than a few times. Compared to modern scooters it is positively horrible to ride, but it’s a charming old fella, much like a two-wheeled Beetle. 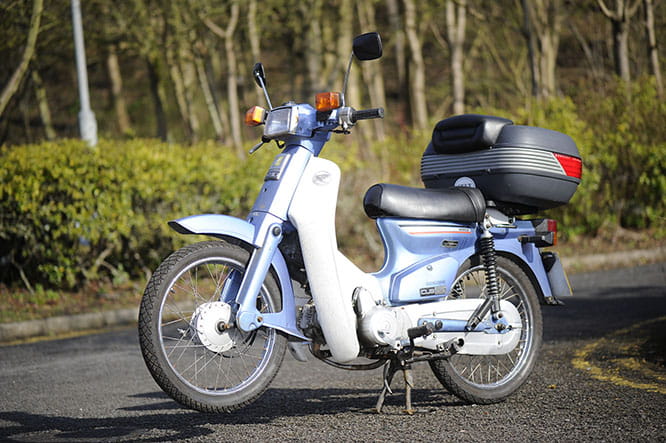 I’m no mechanical genius but servicing the C90 is an absolute cinch. It’s reliable and starts first kick (or even with the first press of the electric start, if you’re weird like that).

Performance is nothing to write home about. In favourable conditions, top speed is 50 mph and comes accompanied by a sensation that suggests that the valves are soon to depart the engine.

Fuel consumption hovers either side of 100mpg, but with a tiny tank that takes just over two litres until the fuel gauge hits the red line, the embarrassment of spending £2.50 at the local Shell station is still a weekly occurrence. If I am keeping the C90 during the summer then I am going to mess around with the sprockets to raise the final drive ratio. It’s a fairly common mod for Cub aficionados, putting a larger front, or smaller rear sprocket on the bike to increase the top speed at the expense of acceleration. First gear’s really short as it is and although top speed’s not something I’m too fussed about, I do want to give the motor an easier time on dual carriageways. It’s something that I think I can get away with, considering I’m not the biggest guy in the world and only ride solo on some of Britain’s flattest roads.

Modern scooters are much better – fact. But then so they should be, seeing as the Cub can trace its heritage back to 1958, it’s hardly surprising. Today’s scooters have underseat storage, bigger tanks, smooth CVT transmissions and more assured brakes and handling. But then they completely lack charm, and with my massive 60 litre Givi top box I’ve got more storage than the average commuter. Weaves a bit at speed though. 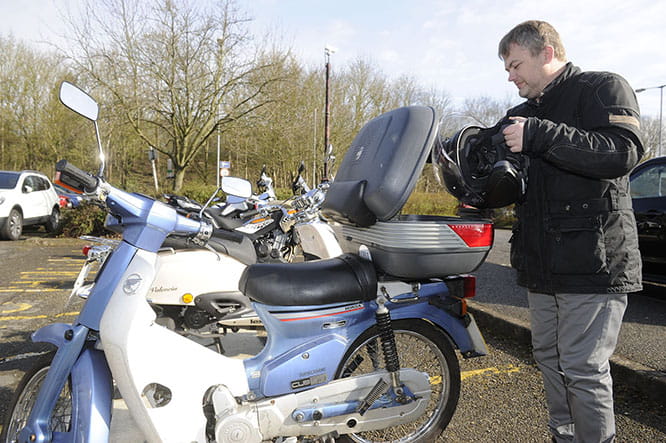 While my P-reg example is a fairly sound example, with 22,000 miles on the clock, there is a bit of rust bubbling around the wheel arches. This is a common problem with Cubs and can lead to MoT failures if it is left untreated and affects the area around the suspension mounts. It wasn’t even mentioned as an advisory this year, in fact the bike sailed through its test, with only the ‘slightly’ worn cush drive rubbers deemed worthy of note.

The fact that they were not deemed excessively worn was probably the tester being a bit generous. It was something of a surprise when, a month later, I had to take the rear wheel off to fix a puncture and found the rubbers had almost completely disintegrated. What was doubly disappointing is that the bike was fitted with virtually brand new Michelin M45 tyres when I picked it up, yet no one had bothered to spend a few extra quid sticking some new drive rubbers while they were at it. Oh well, they are done now. Picked up for less than a tenner on my favourite auction site.

While we’re on that subject, removing and reinstalling the rear wheel was a monumental pain in the proverbial backside, contradicting my previous ‘it’s easy to service’ spiel. It wasn’t so much difficult, just impossible for a man with a mere two hands. Enlisting the help of my dad got the job done within an hour, but still it was a bit fiddly slotting in the rear sprocket and brake drum.

Overall, I’ve gone from from terrified to delighted with the C90, although I don’t know what the future holds for us. It's too good to be dismissed as a 'winter hack' and I’d love to keep it, but I need space in the garage. If someone comes along with a bundle of tenners, I might well be tempted. Otherwise I’ll probably customise it, race it or do that middle aged tour I always promised myself. I might simply ride it to work every day. Just like those good people in Japan intended it to be used all those years ago. 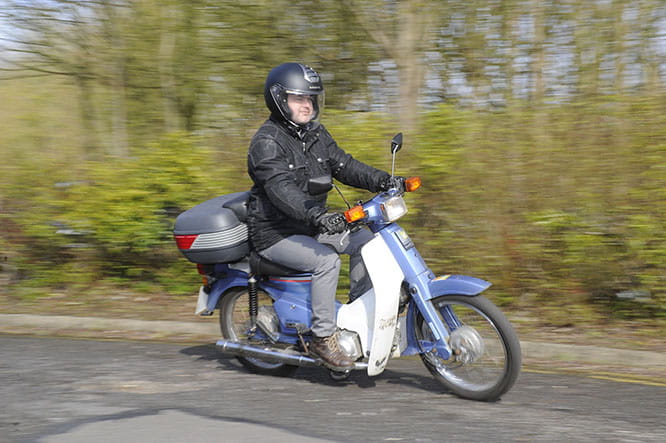