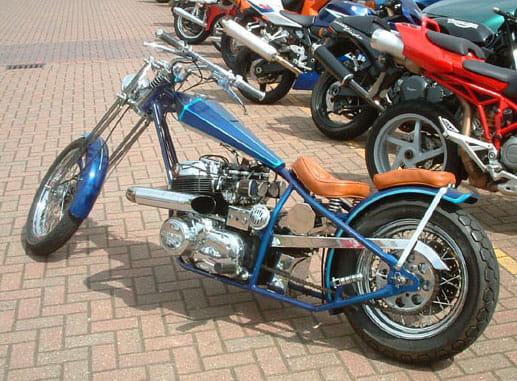 Bennetts offers specialist custom and modified bike insurance. Choppers, bobbers, streetfighters, scooters or café racers, we can help you get cover. The phrase ‘custom’ bike also describes a style of motorcycle, sometimes known as a cruiser. These are factory-built machines that look like custom bikes of the 1960s and 70s. Confused? You’re not the only one. The information below will help.

These are motorcycles built specifically to be different - often by their owner (with some specialist help). Using a mixture of parts from existing machines, custom-made parts and specialist aftermarket components plus a one-off paint job. There are also professional custom bike builders who make bespoke machines to order.

These motorcycles or scooters look relatively standard but have been modified to improve the practicality, styling or performance and sometimes customised to make them stand out from the crowd.

Modified parts can increase the performance of an engine or chassis, but could also be fitted because they are cheaper than the original. Common modifications include changing the exhaust system or the silencer (also known as the end can), fitting aftermarket suspension or brake components, adding additional bodywork or luggage, changing the handlebars or footrests and painting the bike in a one-off colour scheme.

Up close with 4th Dimension’s paint

Owners spend time and money personalising their bikes and have an emotional commitment to them. You can’t just order a spare part off the shelf for these machines so you need an insurance  underwriter who understands the differences between a custom or modified motorcycle and a standard one.


Getting a custom or modified motorcycle insurance quote on a one-off custom or heavily modified motorbike will go through a broker’s referrals team. These are the in-house experts with an in-depth knowledge of motorcycles who understand what makes your bike special and can value it and quote accordingly. Be nice to the referrals team, they will work hard to get you great cover at the best price.

Expect to send photos of the bike to the referrals team so they can visualise the extent of the modifications.


Which modifications could affect my custom and modified motorcycle insurance premium?

At Bennetts we don’t charge extra for or require you to declare any of the 17 most common modifications. For changes that fall outside these you must declare them during the quote process otherwise your policy may not be valid, leaving you without cover.
Conversely click here to see the modifications you need to declare.

Bennetts’ classic insurance benefits don’t just cover traditional classics. In many cases we can also provide the benefits of classic cover (agreed value, cover while at a show and rights to buy back salvage if the bike is written off) to certain modern motorcycles. Ask for details and eligibility when you call us.

The three illustrations below show the differences between a factory ‘custom’ bike which would normally be insured like any other motorcycle, a modified motorbike and a true one-off ‘custom’ machine.