History of the Triumph Speed Triple

A slice of mature British beef…

It’s the bike that put Hinckley Triumph on the map and showed the Italians that although they called their naked a Monster, this British beast really was a bit of an animal. Step forward the Speed Triple, Triumph’s trend setting street fighter that was right at the forefront of the naked revolution… 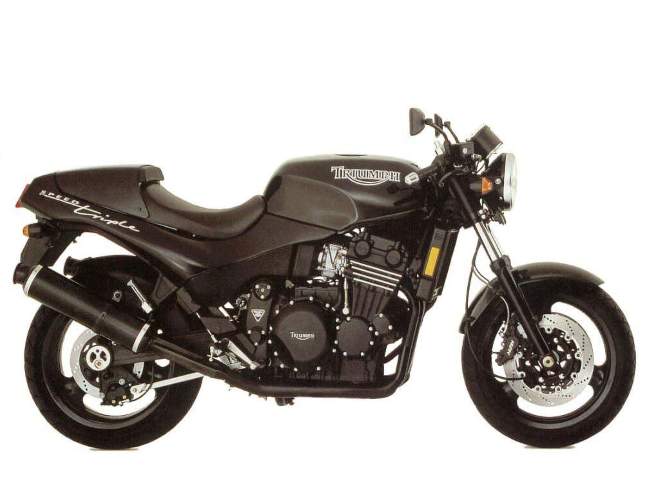 Stories vary as to how the original Speed Triple was conceived. However while some like to think it was due to someone in R&D crashing a sportsbike and noticing that a naked was a lot of fun, the truth is more likely that the Speed Triple was a quick and easy way for Triumph to boost its model range. The original Speed Triple borrowed many of its components from the Daytona 900 sportsbike in what Triumph called ‘modular’ production. Others would say it was a parts bin special. Whatever the facts, the first Speed Triple arrived with clip-on handlebars, a single round headlight and essentially the same chassis and triple engine as the Daytona 900 sportsbike. It was aggressive and raw.  Triumph used it to market a darker side to the company, hoping to attract younger riders into the brand and shed a bit of the ‘pipe and slippers’ reputation. This new attitude was backed up with one of the most crackers race series in the world – the Triumph Triple Challenge. To say cheating was rife would be an understatement (riders hid a secondary Daytona ECU with a higher rev limit in the bike’s seat unit), but the crowds loved the sight of these beasts dueling it out on track while the riders happily pocketed the tempting prize fund.

Few remember this bike even existed, but for one year only Triumph made a 750cc version of the Speed triple using the Daytona 750 as a base. The 749cc triple motor made 89bhp but in truth it was probably built more to shift old stock Daytona 750s rather than attempt to create a smaller capacity market. Visually it is identical to the 900 version. 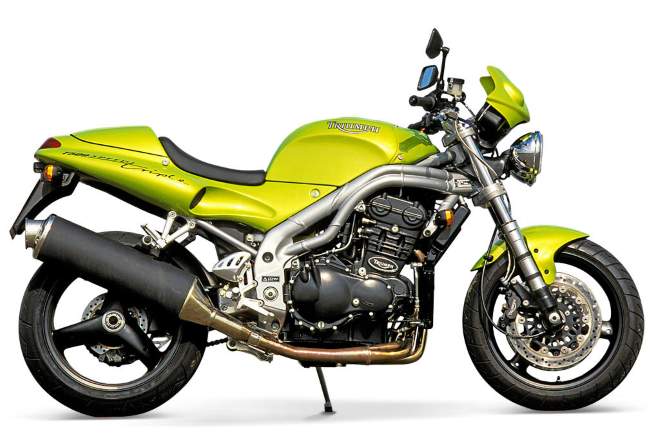 With the Speed Triple’s popularity increasing, Triumph treated it to its first update in 1997 and gave it a series of features that very soon became its trademark. The T509 Speed Triple debuted the now iconic ‘bug eye’ look with the 900’s single headlight replaced by two individual lights. And it didn’t stop there, although very early T509 models copied the original bike’s clip-on handlebars, these were soon changed to flat bars as riders were sick of aching wrists. Visually very different to the original 900, the T509 model also came with a single sided swingram and a stack more power thanks to an upgraded T595 motor that kept the 885cc capacity but increased its power to 108bhp. A moderately rare machine, Speed Triple purists have a real soft spot for the T509 as it has a lovely raw and spirited feel about it. 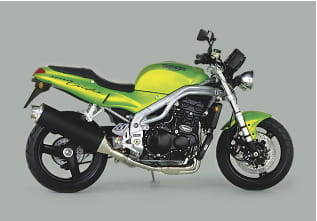 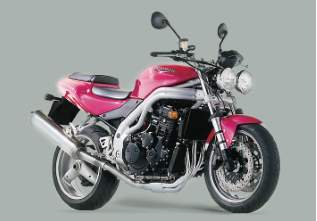 After a few years of confusion where some riders failed to grasp that the Daytona T595 wasn’t a 600cc bike but was actually a 900, Triumph released the Daytona 955i and by 1998 its technology filtered down to the Speed Triple. Although visually identical to the T509 model, the new version gained the same chassis and single sided swingarm as the Daytona as well as the sportsbike’s new, more powerful, triple engine. With its capacity boosted to 955cc, peak power was still a claimed 108bhp but torque was now up to a very healthy 72ftlb. This is the most common version of the Speed Triple and it ran for four years virtually unaltered before 2002 saw the motor tweaked to gain a claimed 10bhp and the seat unit altered to remove the air scoop. In  2004 the introduction of a special edition Speed Triple with a black frame, engine, wheels and swingarm attempted to clear out old stock before the arrival of a new model. The 955i model of Speed Triple really cemented its popularity with riders all over the world, however what most will remember of this bike is its lurid paint schemes that included nuclear red (pink), roulette green and Lucifer orange. 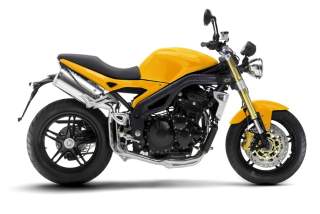 The 1050 was a defining model in the history of the Speed Triple for a number of reasons. Not only did it debut underseat exhaust pipes and radial brake calipers, it was the first time the naked bike had been designed as a model in its own right, rather than rely on Daytona hand-me-downs. Production of Triumph’s large capacity sportsbike had stopped and the firm was looking towards its naked bike as the future. A brand new frame was designed to give the Speed Triple far greater agility while beefier forks, a new swingarm and a repositioned 1050cc motor ensured the long and ponderous feeling of the 955i was banished. This was the sportiest Speed Triple to date with a claimed 128bhp and, thanks to its stubby and stylish look, it was bang on the current trends for naked bikes – although passengers hated the suicidally short pillion seat! 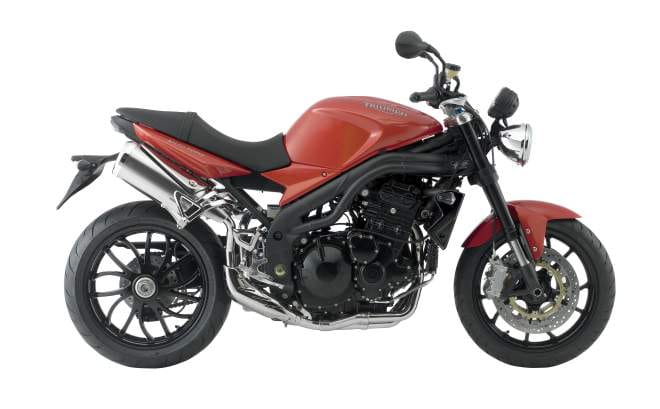 In 2008 Triumph responded to owner’s comments and subtly altered the Speed Triple. As well as extending and redesigning the pillion seat, the radial brakes were upgraded to Brembo units after the previous model’s Nissins came under fire and new ‘bendy’ spoke wheels and anodized black forks gave it a meaner look. Power and torque remained unaltered. 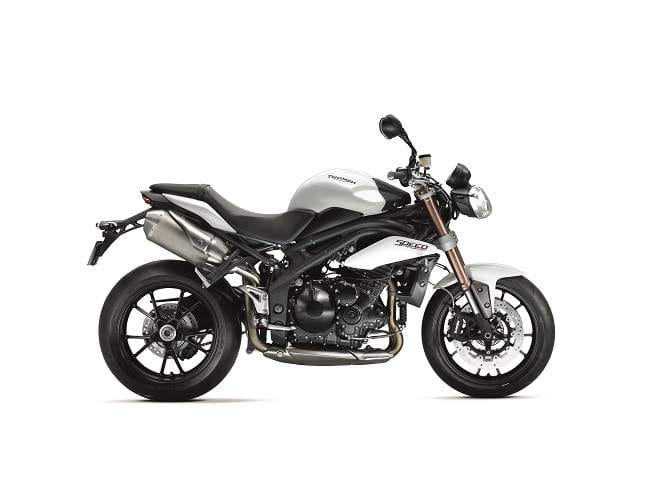 In 2011 the Speed Triple received a thorough update, however what fans of the bike focused on was the fact the iconic ‘bug eye’ headlights were banished, replaced by a sharper ‘foxeye’ style of lens. Purists wailed their disapproval while those who were wishing the Speed Triple would gain a bit of lost bite instead focused on the spec sheet. A brand new chassis with altered weight distribution made this the sportiest Speed Triple to date and it even had ABS as an optional extra. And it didn’t stop there, the suspension was upgraded and although the motor remained pretty much the same, a new selector mechanism was claimed to help cure the clunky gearbox. It didn’t, but you can’t have everything and thanks to a weight loss program this new Speed Triple was now faster, sharper and certainly a match for the new breed of super nakeds when it came to road riding. However on track it was still getting a hiding and so Triumph rolled out the big guns…

Having seen the success of premium models such as the Street Triple R and Daytona 675R, Triumph upgraded the Speed Triple in 2012 to create the Speed Triple R. Essentially a stock Speed Triple with some flash components added, the R used the same engine and chassis as the base model but replaced the stock suspension with Ohlins NIX30 fully-adjustable forks and an Ohlins TTX36 shock. Then, to give it a bit more track credibility, the Brembo monoblocs were upgraded, a small smattering of carbon added and forged aluminium PVM lightweight wheels used to speed up its handling. With a price tag £2,500 higher than the stock bike, the R represented good value for money however it wasn’t to last. After its first year the PVM wheels were replaced with standard cast alloy units as Triumph quietly cut back on the R’s production costs.

But what will be next to come out of the Hinckley factory? What would you like to see? Do you have any favourites? Tell us your Speed Triple stories.