Bespoke musclebike - made in France 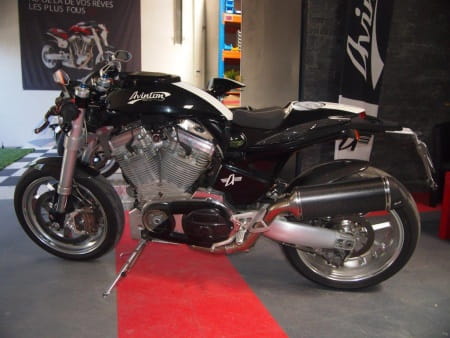 Like most major countries in the world, France has a motorcycle history that lists literally hundreds of manufacturers that once produced motorcycles. The 20th Century gradually saw these fade away as cars became cheaper, or they became car manufacturers themselves such as Peugeot.

It is surprising then that anybody would want to start up a motorcycle manufacturing business now, given the current economic climate, that sees even the big four Japanese manufacturers struggling. But, Avinton based in Sommieres close to Nimes in the South of France aims to fill a niche market, by being different in very many respects with their bespoke ‘musclebike’.

Like many manufacturers before them, they are using a propriety engine, in this case a 1640cc 45 degree V-twin from S&S in the USA, and fitting it to their own oil-carrying, backbone frame. The rest of the suspension, wheels and running gear is then a mixture of the best components that money can buy, topped off with very distinctive bodywork.

The philosophy of the five-person team is that while each of the hand-built bikes share the same basic components, no two machines will ever be the same as each machine will be bespoke to the customers’ own specific requirements.

Obviously visual things like colours will be different, as will exhaust systems, but out of sight will be suspension systems built for the customer’s weight and riding style. Likewise brakes can be specified with everything from a single front disc right up to two double front discs!

Part of the philosophy is that the bike is a one-off purchase and as riders’ needs change they just take the bike back to the factory. For example, the race bike with its forward leaning riding position is converted to the roadster version with its more upright riding position, or maybe the brakes are up-rated by adding another disc.

What is unlikely to change is the minimalist looks of the bike with rider sitting on top of the petrol tank leaving the traditional ‘tank’ to feed air to the grunty V-twin motor of this new musclebike.

You would think that with a starting price of €33,900 they are certainly going to remain unique, but in the last year since they started production, over 60 have been sold and the orders keep moving them closer to their target of 400 machines per annum! www.avinton.fr