Inside the MV Agusta Factory 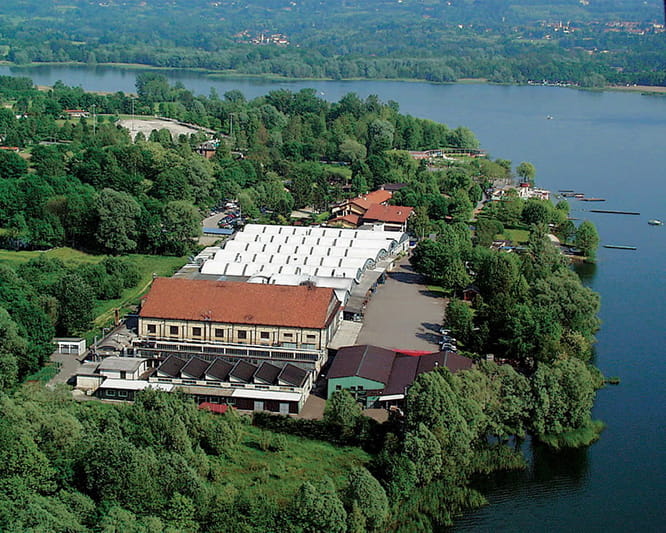 Since I first began writing, I have seen a fair number of motorcycle, and car, factories at first hand but none as unusual – or as fascinating - as the MV Agusta facility, nestling against Lake Varese in Schiranna, northern Italy.

Bizarrely, in some respects it almost has the feel of one of the old, artisan bike builders I used to know as a young man. If I closed my eyes, I half expected to see the immortal Eric Cheney (motocross racer tuner chassis designer in ithe 60's and 70's) wander round a corner wearing welding goggles and carrying a piece of tubing for his latest frame. The atmosphere at MV is of people who know what they are doing and care passionately about their work – craftsmen aspiring to MV’s strapline of “Motorcycle Art”.

The obverse side of the coin is that the facility is extremely modern and immaculate in a way that Eric’s workshop, covered in weld spatter and lathe turnings, never was.

It’s an utterly fascinating set of contradictions and it may well be that MV have found a very special niche in the motorcycling market – yes, the mass production of motorcycle art.

The first thing to remember is that Schiranna is not so much a manufacturing facility as an assembly plant. Parts arrive wholly, or largely, finished from specialist suppliers. This is the way of the world for small manufacturers.  MV produce only 8,500 units each year, and aspire to make no more than 10,000 bikes, so it is much more cost effective to sub-contract the manufacturing rather than do it in house. 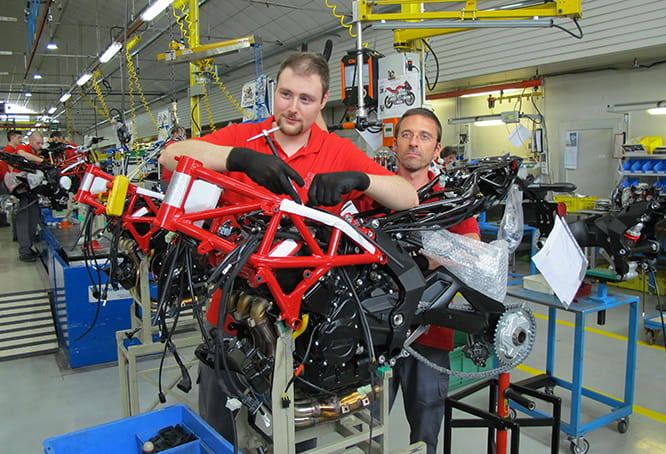 This method of making bikes is reflected in the composition of the MV Agusta work force. Of a total 260 employees, 90 are employed in design and development whilst the remaining 170 make the bikes and run the company. This huge weighting in terms of R&D reflects that MV is driven by design and technology – not blokes taking castings out of molds or painting frames. MV provides the design, and CAD/CAM programmes - and a specialist factory pours the metal.

Making motorcycles in this way allows tremendous flexibility in production which explains why MV can make such a wide range of different bikes spread over a very small total production.

The factory is also tiny. Not only is sub-contracting MV’s chosen method of motorcycle production, in reality it is the only way they can make machines. There is simply not enough space at Schiranna to do anything else.

Why is this important to MV’s future? The bottom line is that all motorcycles sold today function effectively. I choose the phrase “function effectively” deliberately. Gone are the days when clutches failed, engines burst into flames or some machines struggled getting round corners. 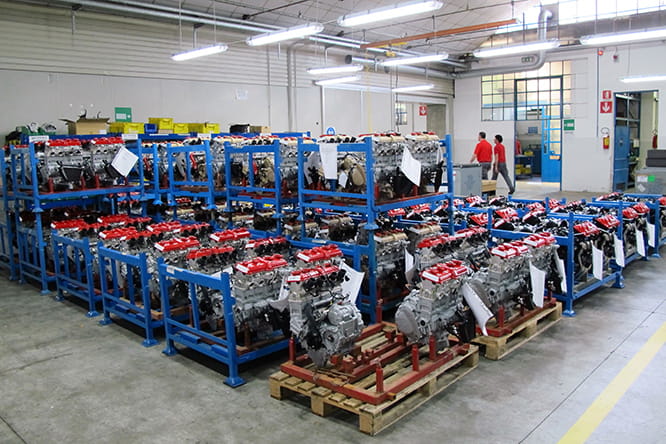 From the cheapest Chinese made 125 all the way up to an MV Agusta F4 RC World Superbike replica, all the bikes will stop, start and not kill the rider. It’s the bit in the middle, between a Wonjan 125 and an F4 RC, which is important. This heavily nuanced and subtle area is why we ride – why we want to ride. In it lies not only mechanical efficiency but the way the light catches the tip of the fairing, the angle of handlebars and the cadence of the exhaust note. It is these ephemeral elements which can either make or break a brand like MV for truly they are art, not efficiency.

Get the concept wrong, and you are left with an overpriced, over hyped, narcissistic creation. Get it right, like the first MV F4 750 or the current F3 800 Ago, and the motorcycle becomes an object of lust and desire which makes its premium asking price good value.

Viewed objectively, Paul Gaugin’s, “When Will You Marry Me” is either a collection of pigments applied to £25 of canvas and stuck in a frame worth a couple of hundred quid – or the £200 million it made at auction. Both facts are accurate. 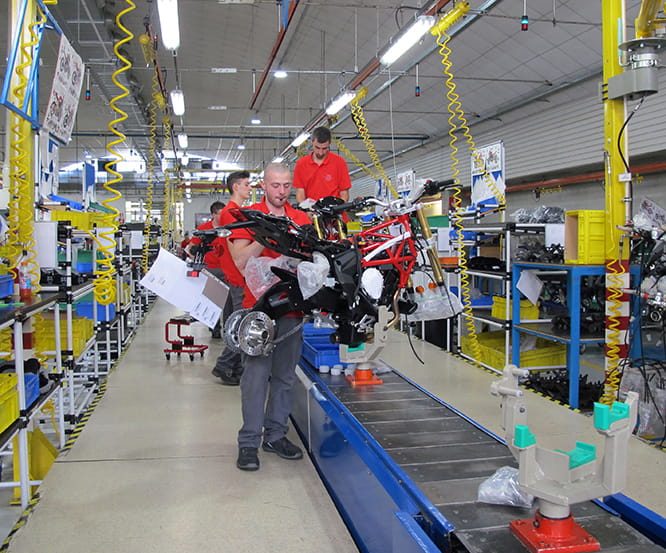 If MV can succeed in their long term aim of making motorcycling magic they will be very, very smart indeed because for sure there are, world-wide, 10,000 potential purchasers each year of motorcycling art which also happens to work very well in the real word.

All these ephemeral elements explain why the MV facility is so interesting. At the core is the fact that the factory is ancient. It began life as the Aeronautica Macchi seaplane factory in 1912 - hence its location on the banks of Lake Varese – and the huge, sliding doors still bear testimony to its aircraft heritage. Ironically, the large open spaces suit a modern production line very well – providing the manufacturing is done the MV way.

Most mass production throughout the world is now executed on a rolling production track where a unit progresses down the line at a ruthless pace whilst workers carry out their designated tasks at a frenetic rate. It is a soulless atmosphere where the humans are de-sensitised and become no more than organic automata – truly, mindless wage slaves.

The atmosphere at MV is hugely, immensely, different from this. Clearly, the workers are not sat around idly but there is a palpable sense of commitment, dedication and pride – not to say happiness – which I can’t imagine could have been faked for an unscheduled visit by a journalist. To produce an artificial construct of peace and calm simply can’t be done when a journalist wanders in unannounced. If MV is motorcycle art, then the production staff are the artisan craftsmen who execute the designer’s abstract ideas. 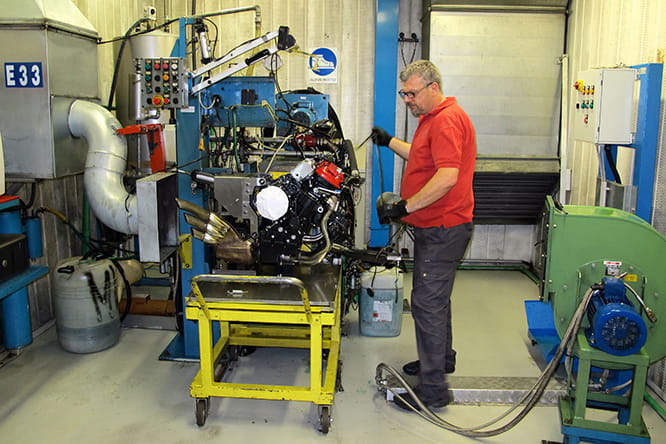 There are also innumerable references and links to MV’s motorcycling heritage everywhere within the facility. Pictures of the great riders of the past – Agostini, Hailwood, Surtees, Ubbiali and the rest of the pantheon of Moto Gods – constantly reinforce MV’s heritage so that it is sewn into the very fabric of the factory.

So, as a production facility, MV Agusta at Schiranna is quite ordinary. However, as the practical manifestation of a philosophical concept it is fascinating. It is also, perhaps, a tiny door to a Utopian future for all of us. If all manufacturing can be done on a human scale, with a powerful thread of dignity and respect, then we will have made an immense step forward as a race. Yes, MV on the banks of Lake Varese is a truly fascinating place.

Are you an MV customer?  or