The History of the Ducati Monster 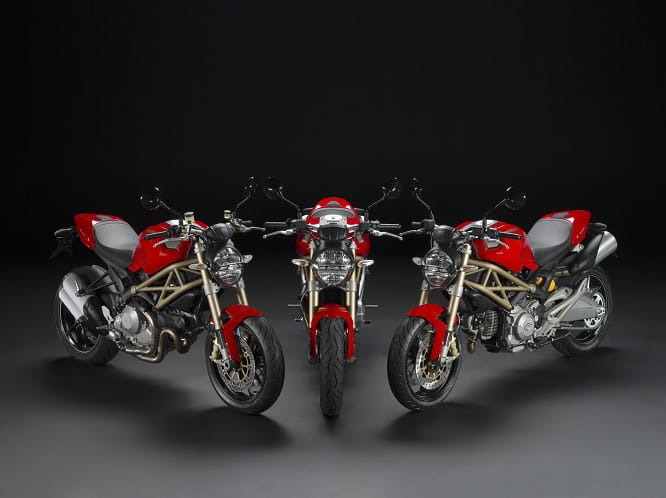 The Ducati Monster is generally regarded as the bike that allowed Ducati to survive a fairly financially sticky period in the 1990s as without it there was a very real possibility the company would have gone bust. Yet it could so easily have never happed because as well as being destined to be a Cagiva model, Ducati’s lack of credit with its suppliers saw the bike almost fail to make it to production at all. But, thankfully for Ducati, it did and the this naked cafe racer went on to be manufactured in 37 different guises, has sold over 300,000 units worldwide and for the majority of the 1990s accounted for just over 40% of Ducati’s total sales. Not bad going for a bike inspired by a movie poster…

Designed by Miguel Galluzzi, who now works for Aprilia and was responsible for the design of the RSV4, ‘Il Mostro’ had a very simple concept. According to Galluzzi, “all a bike needs is a saddle, engine, two wheels, handlebars and a tank to fill with fuel…” and that’s what he based his new bike around. However it was after Massimo Bordi, who was manager of Ducati at the time, asked for a bike that looked like the machine in the famous picture of Marlon Brando in The Wild One that Galluzzi realised this concept. In late 1992 at the Cologne Motorcycle Show, after a last minute change of heart saw it carry the Ducati name and not Cagiva, the Monster was unleashed upon the world… 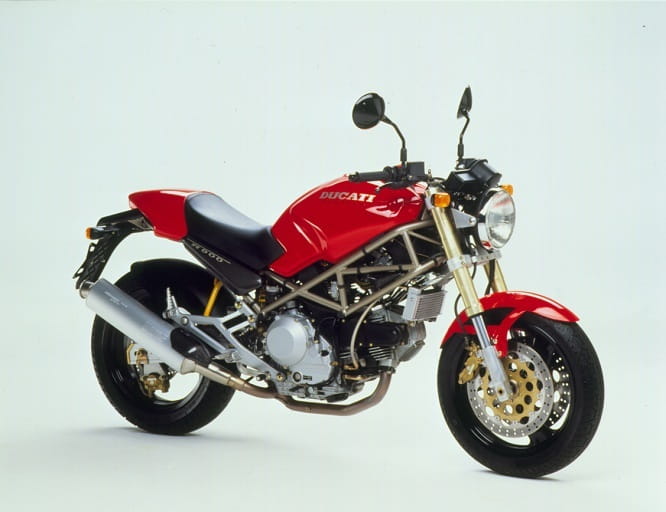 Using the 888 sportsbike’s chassis as a base to give the bike agile handling, Ducati fitted the 904cc air-cooled sohc engine from the 900SS to create a new breed of cafe racer. Unlike rival naked bikes, which were generally uninspiring commuters, the Monster was a premium product that boasted inverted forks, Brembo brakes and sportsbike handling. It might have cost the same as a FireBlade, but it delivered on both looks and performance and at just 185kg was incredibly light. Style conscious (and dry) countries such as Italy went mad for the Monster, however the high price tag was a stumbling block for many. Riders were crying out for an entry level Monster with the same cool looks but a far more affordable price tag and a year later, that’s what they got. 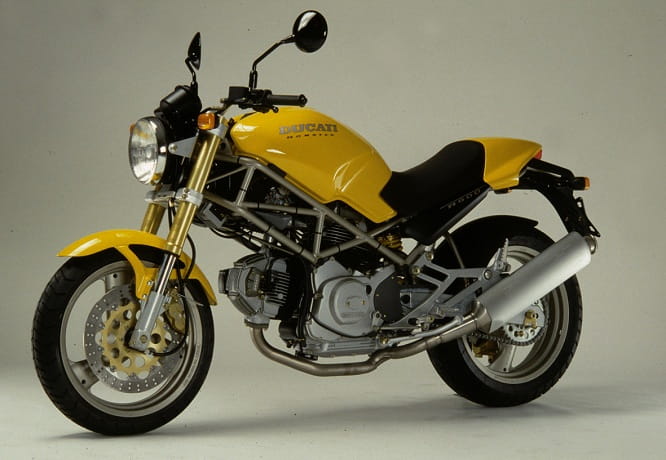 Riding high on the popularity of the M900, the following year Ducati released a baby monster – the M600. Costing a far more reasonable £5000, which was £2500 less than its bigger brother, the M600 retained the Monster silhouette but used a smaller capacity air-cooled V-twin engine with a lower chassis specification to reduce its price. Designed to attract a new breed of younger rider into the Ducati family, the M600 had a low seat height, tipped the scales at just 175kg and was perfectly suited for city riding. It might have been launched at the same time as the iconic 916, but the ‘budget’ Monster’s reasonable price tag saw it sell in huge numbers, easing Ducati financial difficulties and (arguably) proving a far more important bike for the company’s survival.

The M750 Monster and the Dark and Cromo 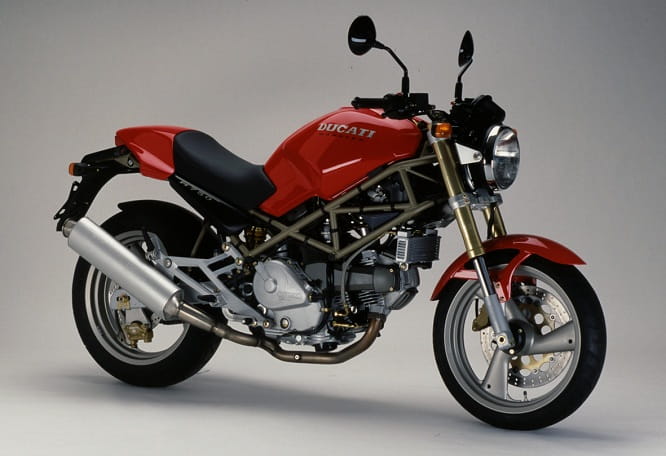 Flushed with the success of the M900 and M600, Ducati over-egged the pudding and in 1996 released the generally unpopular M750 Monster. Using the firm’s 748cc air-cooled engine, the M750 was basically a bigger capacity M600 and came with a single front disc and a lower specification than the M900. A bit of a neither this or that bike, the M750 failed to sell well but didn’t cost much to develop and actually stayed in the model line-up until 2003. In 1998 Ducati launched the first of its Dark models, the M600 Monster Dark. Bereft of the classic Ducati red paint, the Dark models are, as the name suggests, more mean and moody thanks to the black paint on their frames and tank. Interestingly, in contrast, the same year as Ducati released the Dark, they also unveiled the Cromo with its reflective tank! 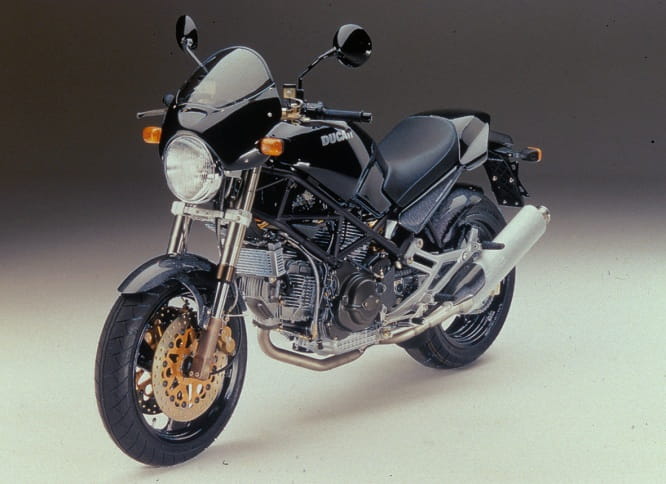 By 1998 the Monster was getting long in the tooth and Ducati needed to rekindling a bit of excitement in the brand, hence the Dark and Cromo models. What do Ducati usually do when they need a quick fix? Simple, they add some accessories! The first ‘S’ model Monster was the M900 S, which arrived with carbon side panels and mudguards, a small screen and a few extra bits of bling. The Showa forks received an upgrade to make them fully adjustable and the Sachs shock was also improved, presumable because Ohlins didn’t answer the phone… 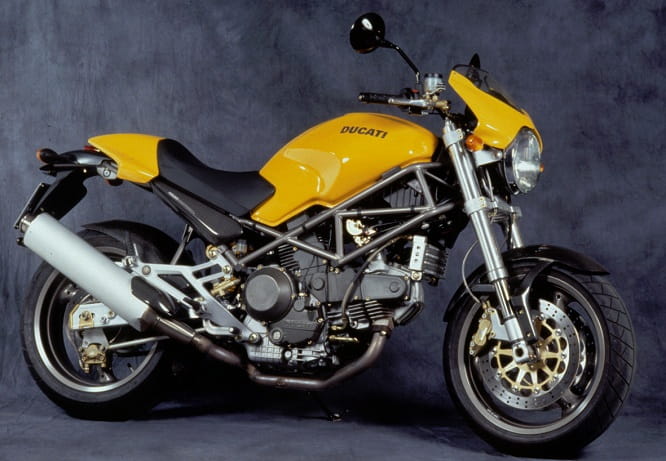 After the millennium hangovers subsided, the big news for Monsters fans in the year 2000 was the addition of fuel-injection on the M900. Signified by the ‘ie’ after its name, this update not only boosted power by 11bhp, it also gave the bike a stronger mid-range and was accompanied by the fitment of the S model’s higher spec forks as well as a new digital dash. True to form, the smaller capacity bikes followed suit a few years later. In 2002 the M600 not only gained fuel-injection, but also a capacity increase to 618cc to become the M620ie while the M750 simply became the M750ie. This year also saw the introduction of the first ‘S’ model M600, the M600Sie, which gained carbon panels. 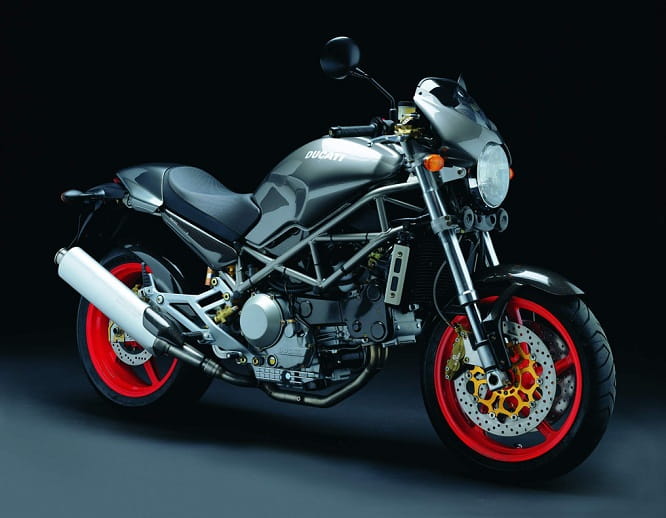 In 2001 Ducati spotted the need for an even sportier Monster and took the controversial step of adding a water-cooled bike to the traditionally air-cooled range. With the ‘4’ signifying the number of valves per cylinder, the S4 was powered by a re-tuned version of Ducati’s desmoquattro engine from the 916 sportsbike and brought a claimed 101bhp to the table, making it the most powerful Monster to date. The styling was still very much Monster, but the water-cooled engine necessitated a jumble of pipes and hoses that Monster purists hated. A year later Ducati launched the S4 Foggy Rep while 2003 saw the S4 increase in capacity to 996cc and become the S4R with its single sided swingarm and twin stacked pipes. Then, as if the S4R wasn’t mad enough, in 2007 Ducati unleashed the S4RS with its Ohlins suspension, 998cc testastretta engine and 126bhp! This was the final hooray for the water-cooled bikes as Ducati dropped them (for now) from the model range at the end of 2008. 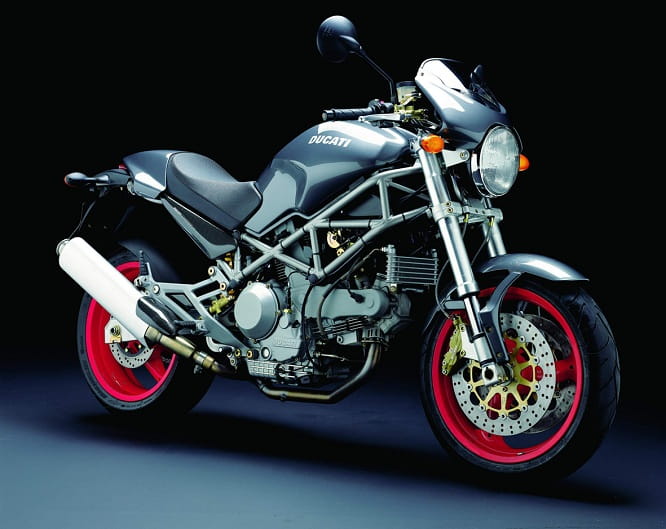 More of a tweak than a full-on model update, 2003 saw the introduction of the 992cc M1000 and M1000S, which fed the larger capacity Monsters a few more ponies. The same year the M750ie became the M800 with an 802cc air-cooled engine and (possibly more importantly) the M620ie introduced Ducati’s APTC clutch. Designed to reduce the traditionally heavy clutch lever action, APTC also included a slipper function and is still used on Ducati models to this day. In 2005 Ducati unveiled the S2 range of bikes, which mimicked the S4’s singe sided swingarm and twin stacked pipes but used air-cooled engines. The initial S2R 800 was followed by the S2R 1000 a year later while in 2006 the M695 replaced the M620 with a capacity increase to 695cc. 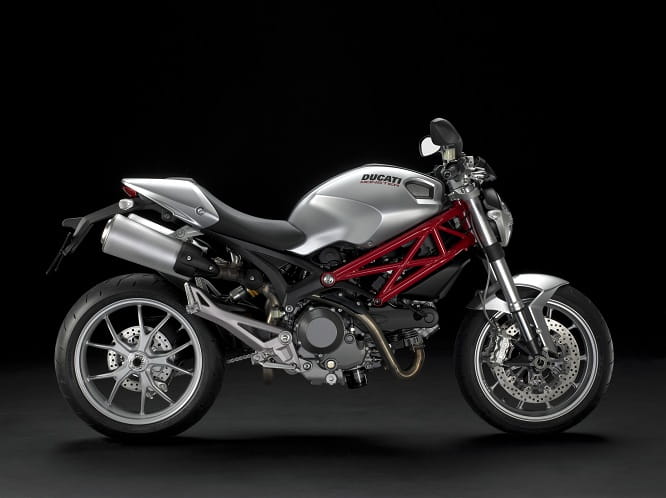 Having kept the same basic silhouette since is launch, 2008 saw the whole Monster range revamped with a brand new look. Out went the side mounted exhausts and long tank, in came twin underseat pipes and a stubby and squat stance. The larger capacity M1100 Monster grew to 1078cc and as well as a single sided swingarm, came armed with radial brakes for the first time and a fully digital dash. The S version even added Ohlins suspension to the party. And the baby Monster wasn’t left out, the M696 may only have had a conventional double sided swingarm, but it too came with radial brakes and a sharp new attitude. In 2011 the Monster range gained electronic assists for the first time as the M1100Evo arrived with ABS, traction control and a wet clutch. But was the air-cooled party nearly over? In 2013 Ducati unveiled its 20th Anniversary Monster models with styling and paintwork reminiscent of the 1993 bike. Was this a wake to air-cooling rather than a celebration of its glory? 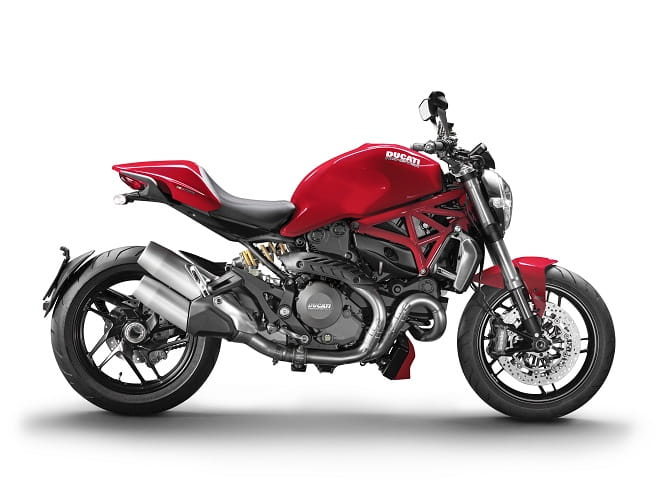 In 2014 the day came that many predicted never would as Ducati killed off its large capacity air-cooled Monster range. The new M1200 and M1200S arrived with a liquid-cooled testastretta 11-degree engine, new sporty attitude and technology such as ride-by-wire and traction control. A far cry from Galluzzi’s original concept of ‘a saddle, engine, two wheels, handlebars and a tank to fill with fuel’, these latest generation of Monsters are amongst the most technologically advanced bikes on the road toady. Does that makes them any less Monster? Ironically, when it comes to styling they owe more to the 1993 bike than the 2008 models, but there is certainly a bit of the air-cooled soul missing. At this point, the only air-cooled Monsters in Ducati’s range are the M796 and M696. How much longer can they last? 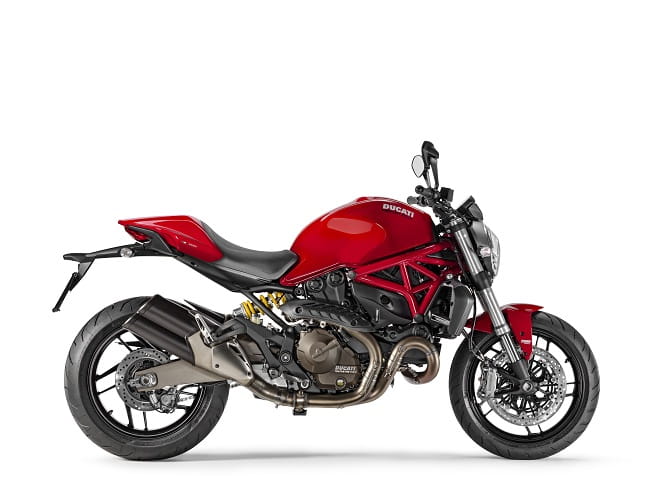 And so it happened, this year we bid a fond farewell to the last of the air-cooled Ducati monster models in the UK as M696 made way for the new Monster 821 with its liquid-cooled engine. True, this latest generation of Monster makes considerably more power than the original M900, but does it have the same basic charm? Like the Monster 1200 before it, this is a bike for the electronic generation and as such comes with all the gizmos. However is this really the end for the air-cooled Monster? If you look on Ducati’s global website you will see the M795 is still listed in all its air-cooled glory. You can’t get it in the UK, but at least some countries still appreciate a bike with fins on its cylinders…

Look out tomorrow for our review of Ducati's latest, and most powerful Monster yet - the 1200 R!