All bikes are fun and freedom machines, able to take you places, and on experiences you simply can’t get any other way.

But some are bought to be day-to-day transport, too, where value, efficiency, comfort and economy outweigh all other factors to deliver you where you need to go quickly, effectively and as affordably as possible.

But which are the best of the 2019 crop? That depends on what your priorities and usual journeys are like. Small engine machines such as 125s are both accessible, able to be ridden on L-plates and a car licence or with a CBT certificate, affordable, with some starting at under £2000 and potentially hugely economical, returning mpg figures well in excess of 100 miles to the gallon. That, allied to low insurance and road tax of just £20 a year makes them one of the most affordable ways to commute, although the downside can be limited performance, comfort and equipment.

At the other extreme, larger 750cc+ machines can offer all the performance and comfort you need, so making longer, motorway journeys a doddle, but are more expensive to run and require a full motorcycle licence.

While in the middle-ground, depending on your needs, there’s arguably the best of both worlds: 300cc machines and up which often can be ridden on an A2 licence yet still have good economy, enough performance to make dual carriageways unintimidating, reasonable creature comforts and yet still a sticker price – or monthly PCP payment – well within reach of most.

To help you choose which type – and which example – is the best commuter for you, here’s our pick of the 10 best commuters for 2019 – in ascending price order… 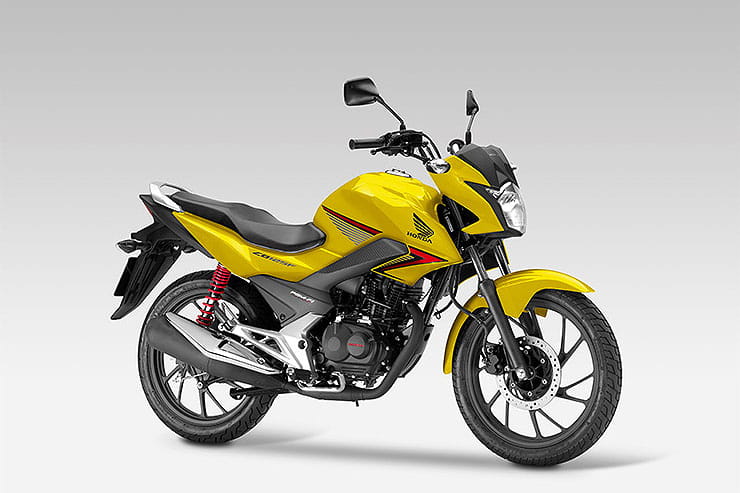 ‘Big H’ has always been brilliant at producing economical, brilliantly practical, small-engined commuters, ever since its world-changing first 50cc Cub in 1958, the bike that went on to be the world’s best-ever selling vehicle. In 2019 in the UK, it’s closest equivalent, arguably, is the CB125F. First introduced in 2015 as the latest in a long line of 125cc, four-stroke, single cylinder commuters it’s a no-frills roadster that simply does what it sets out to do brilliantly; is easy-as-pie to ride and, thanks to a claimed mpg of 155 (although in reality that’s more like 110mpg), is cheap-as-chips to run as well. The motor produces 10.45bhp which is just about enough for 70mph. Assembly in India keeps the price down without noticeably sacrificing quality, it’s light and easy to ride, more durable than most at this end of the market, looks good and even has proper twin clocks and a fuel gauge – everything you need, in fact, for that bargain basement commute across town. 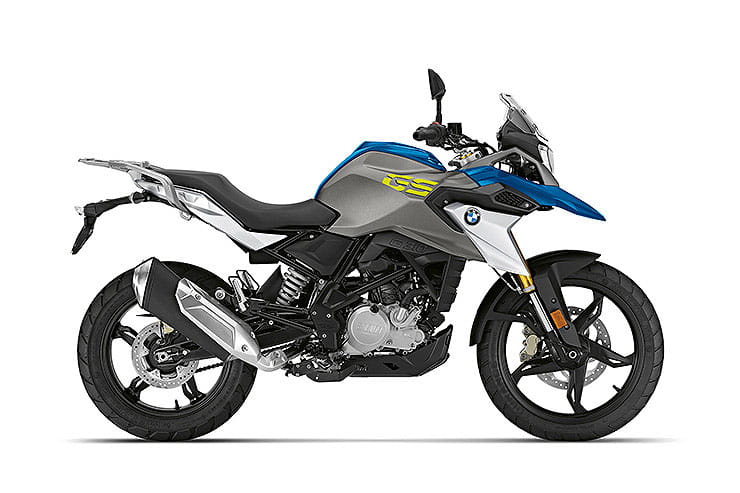 German premium big bike specialists BMW have recently made a concerted move into small, entry-level bikes and the G310GS, introduced in 2017 in succession to 2016’s G310R roadster, is its best yet. Both are again, like the CB125R, built in India, this time by BMW’s partner, TVS, and are based around an all-new, liquid-cooled, 313cc single-cylinder four-stroke with the novel design twist of having its cylinder ‘reversed’. Performance is an A2-licence compliant 33.5bhp, economy is a fairly impressive claimed 85mpg and with a decent chassis including inverted front forks and a monoshock rear it’s an easy, comfortable handler, too. Best of all, though, in this adventure-style ‘GS’ guise, it’s very much a junior version of BMW’s hugely-popular R1250GS twin, right down to its roomy riding position and comfort, decent weather protection, quality equipment and great ‘big bike’ looks. And all for under £5500? Surely that makes it some kind of all-rounder bargain. 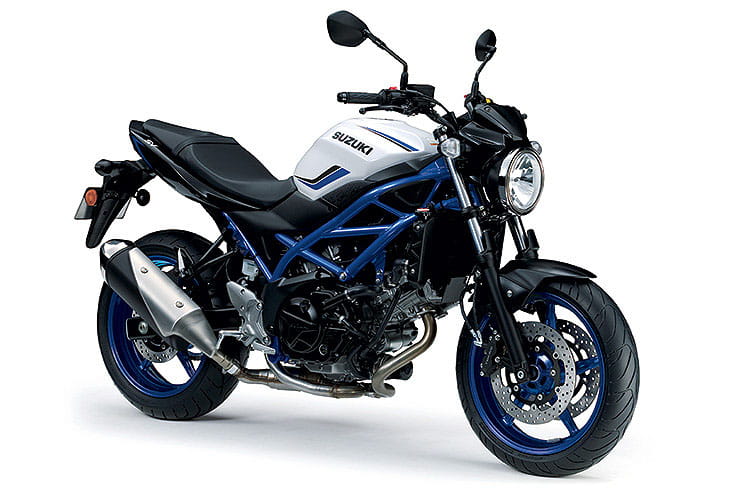 Few middleweights have proved so successful, popular and enduring as Suzuki’s charming and affordable V-twin roadster all-rounder, the SV650. First introduced in 1999 in both naked (N) and half-faired sports (S) guise in 1999 it proved an instant hit for its combination of novice-friendly manners, engaging performance and brilliant value. It was then restyled and updated in 2004 with a new frame and fuel injection in which form, with a perky 69bhp in endured until 2013. Updated again to 75bhp and with a fresh, smoother look it was reintroduced in 2016 in pure roadster form but the heart of its appeal – its brilliantly willing and flexible V-twin – is essentially unchanged. As such it’s a great middleweight all-rounder: easy to ride, practical, versatile and far more entertaining than it has any right to be. Yes, finishes are little suspect so if used year-round it needs to be looked after, but mechanically it’s bulletproof. And all of that, for under £6K, makes it a brilliantly affordable commuter, too. 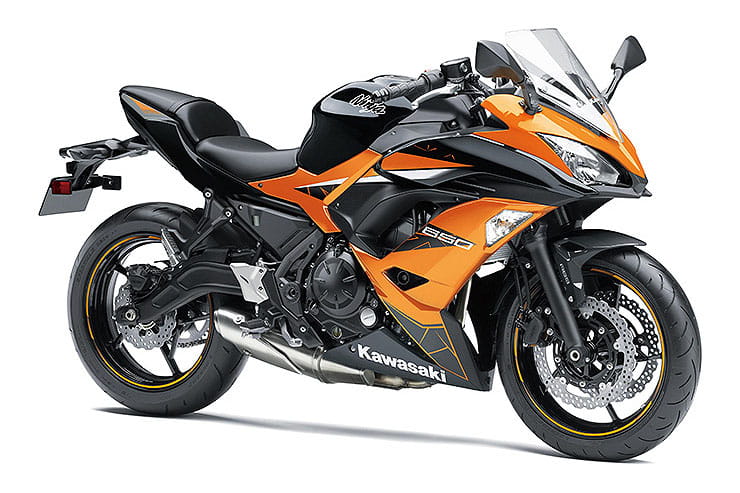 The Ninja 650, introduced in 2017, is effectively the latest (fourth) incarnation of Kawasaki’s ER-6f as first brought out in 2005. That bike, along with its roadster brother, the ER-6n, was basically Kawasaki’s answer to Suzuki’s SV650 duo in being an affordable but perky twin-cylinder 650, the main difference being the Kawasaki’s a parallel twin whereas the Suzuki’s a V-twin. Always slightly more powerful and revvier than the Suzuki, the Kawasaki’s also evolved more thoroughly. 2017’s update, along with heritage Ninja 650 and Z650 names in place of the old ERs, brought an all-new, lighter frame, a gruntier 67bhp tune, new clocks and styling and a significant boost in general quality. The result, though pricier than the SV, is a genuinely great – and great value – middleweight all-rounder, just as adept as taking you effortlessly into work every day as delivering an entertaining Sunday ride-out. Sadly, though, if you want one in green or orange (as opposed to black), it’s £200 more… 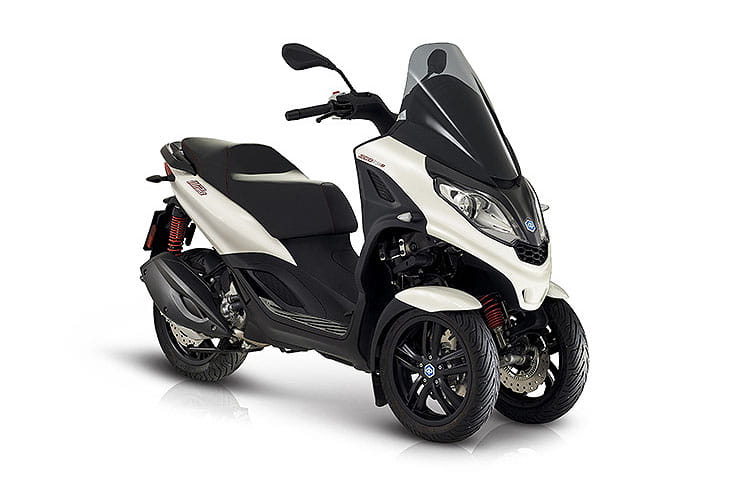 OK, so the intention wasn’t to cover commuter scooters here, that deserves a whole category of its own, but the updated-for-2019 Piaggio MP3 300 is such a unique proposition and so effective a commuter it’d be criminal not to include it. The Italian scooter specialists introduced their first MP3 leaning three-wheelers in 2006 and their combination of virtually uncrashable stability and exceptional front-end grip proved such a massive hit – particularly to novice commuters wanting to traverse varied city streets – that they’ve spawned a whole dynasty. Better still, for 2019, the most affordable version in the UK, the 300 Sport, benefits from Piaggio’s updated ‘HPE’ (High Performance Engine’ which sees peak power increase usefully from 22 to 25bhp. The MP3 may not be the cheapest, most powerful or economical commuter, but as a practical, secure, comfortable and reassuring means of getting to work, for motorcycle novices there’s few better. 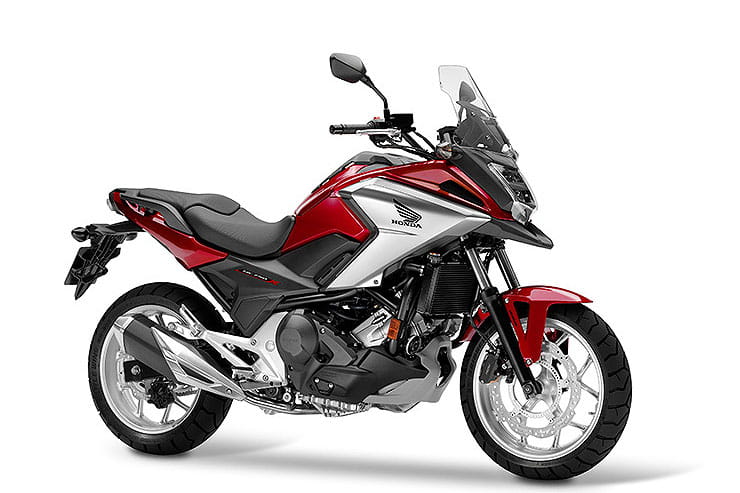 A little like Piaggio’s MP3, Honda’s NC750X is another novel take on the commuter motorcycle – it just doesn’t look it. First introduced as the NC700X in 2012 along with the NC700S roadster and Integra 700 superscoot, it’s basically a two-wheeler with motorcycle looks and appeal but scooter mechanicals and ease-of-use. At their heart is a low-revving parallel twin that’s produces a lazy, effective 54bhp plus is also impressively frugal, capable of 75mpg-plus. Along with that are smooth, novice-friendly manners, a useful, scooter-style luggage compartment under the (fake) tank and, arguably best of all, the (£700) option of Honda’s clever ‘DCT’ (Dual Clutch Transmission) automatic gearbox which basically works like a sophisticated twist ‘n’ go scooter. Motorcycle commuting has never been easier – and all for a temptingly low price as well. 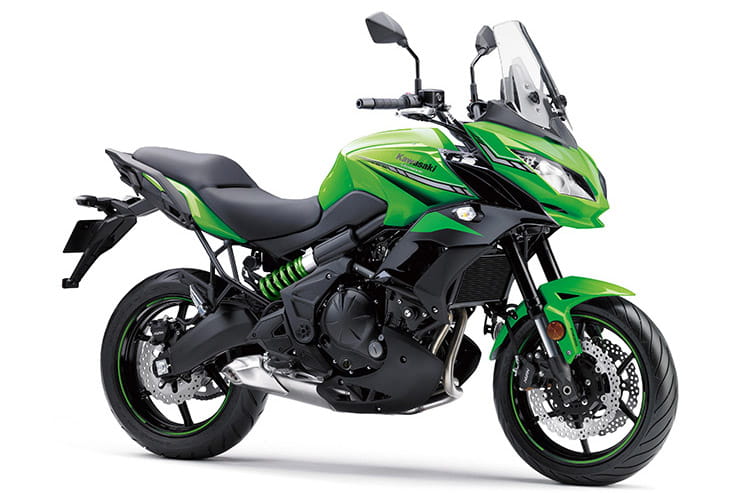 Like Suzuki’s evergreen and hugely popular 650 V-twins, Kawasaki’s rival 650 parallel twin middleweights, ranging from roadsters to sportsters to, here, in adventure bike style, have also proved very successful. The adventure style Versys was first introduced in 2006 and, despite its oddball looks, was successful due to its combination of pleasing 60bhp performance, roomy upright comfort and great value. That recipe hasn’t changed over its two major updates since, although the Versys’s looks, quality and equipment certainly have. This latest version debuted in 2015, has 68bhp, an adjustable screen, bags of easy comfort, intuitive handling and lots of nice touches – all making it all the commute you need and still for the same bargain price. If you want adventure bike versatility and style and a machine that pretty much does it all, nothing does it better for the money. Kawasaki now even do luggage and top box-equipped Tourer and Grand Tourer versions for not a lot more. 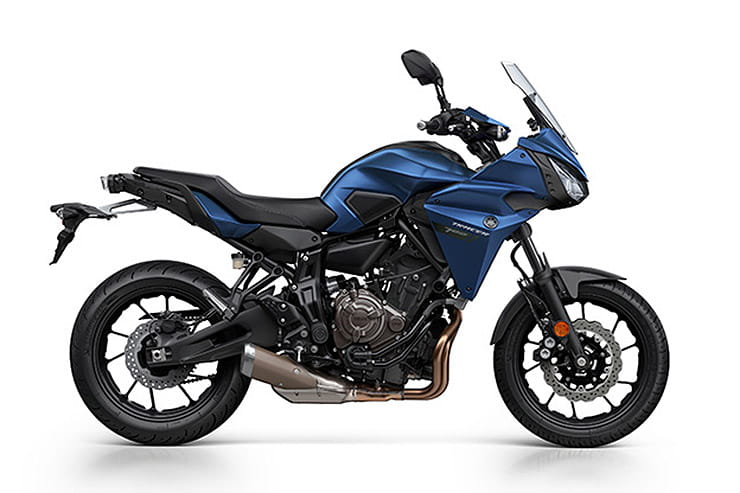 Simply one of the best value all-round bikes you can get – and a great commuter to boot. Following its 900cc three-cylinder brother a year earlier, the Tracer was introduced as a half-faired, adventure-style, sports-tourer version of Yamaha’s brilliant 689cc MT-07 twin-cylinder roadster in 2016. Its MT underpinnings ensured lively and nimble 74bhp performance, the roomier riding position, fairing and more gave true versatility and long distance appeal and the price, although inevitably up slightly, was as tempting as it was with the MT-07. The result has been a Europe-wide sales phenomenon, so don’t expect to stand out from the crowd. While its low price also dictates that its spec is a little basic (although an uprated, luggage-equipped GT version was introduced for 2019). But for entertaining performance, true versatility and affordability, not much currently comes close. 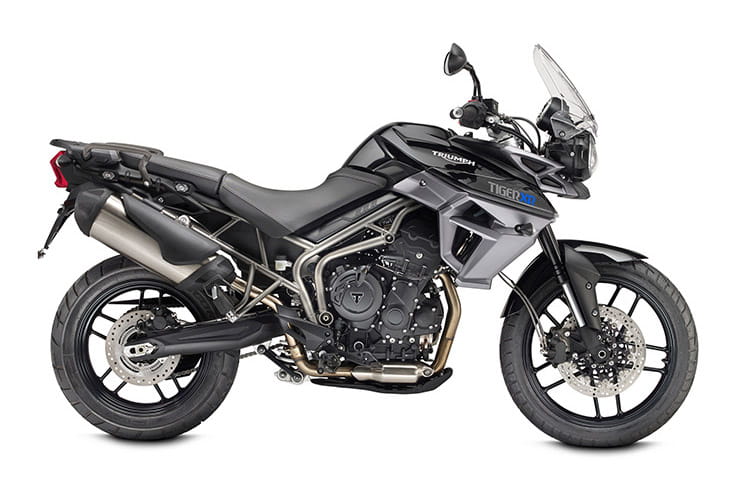 First introduced in 2010 (although the Tiger 800 somehow seems like it’s been around forever), British firm Triumph’s middleweight(ish) adventure bike was based on a gruntier, longer stroke version of its already brilliant 675cc three-cylinder from the Street Triple roadster in a roomier, more versatile chassis. And although no true off-roader (a road XR version was offered along with a more off-roadey XC variant), its brilliant combination of easy manners, sublime, evocative drive, typically fine Triumph handling, great real world versatility plus a decent price ensured it was a big hit – so much so that it’s been regularly updated into a whole family of machines today. The latest updates came in 2015 and resulted in a family of six models and a huge catalogue of accessories. So much so that, should you wish, the top-of-the-range XCA (fully-loaded off-road) variant will set you back £12,700 and has enough goodies to make a BMW R1250GS blush. But as we’re talking commuters here we’d most strongly recommend the most affordable version, the bas 800 XR. With this, you may miss the fancy TFT screen, extensive riding modes, Brembo calipers, heated grips etc, but for just £9200 you get the same fruity 94bhp, brilliant road manners, great comfort and more, all making it an exceptional all-rounder and commuter. 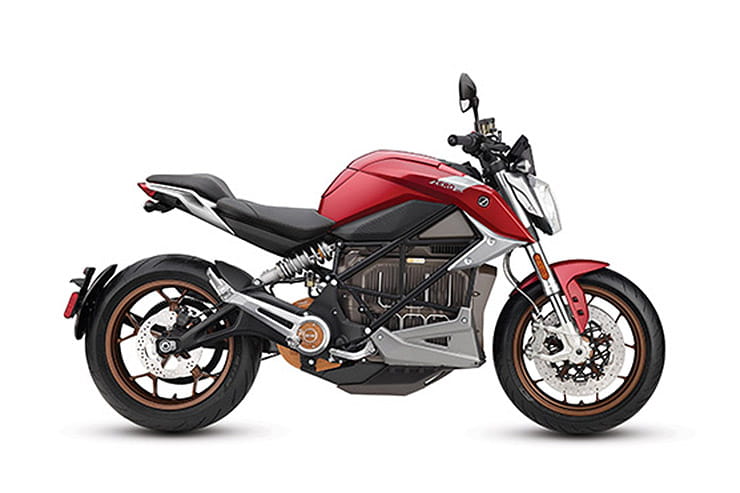 And as we’re talking commuter bikes, and as the growing breed of electric motorcycles are at their most logical as commuters, here’s a final swerve ball – Zero Motorcycles’ new-for-2019 SR/F. The California electric bike company’s latest is also certainly its greatest and, although still pricey, certainly worth consideration by those looking for a commuter. Featuring an all-new motor producing a credible 110bhp plus a whopping 140ftlb of torque, the SR/F also stands out for having the best Zero chassis yet, complete with fully-adjustable Showa suspension front and rear, radical brakes, fancy TFT screen and more. As a result its performance is a revelation – particularly from standstill while, though still heavy, its handling is more than competitive, as well. Best of all, though, its range is a genuine 80+ miles (more if you’re gentle), it costs a pittance to recharge (although still requires a few hours) and there’s no road tax. Yes, a Zero’s initial purchase price is still pretty steep, but if all that fits the kind of commute you do, there’s probably no cheaper, or more ‘on trend’ way of doing it.