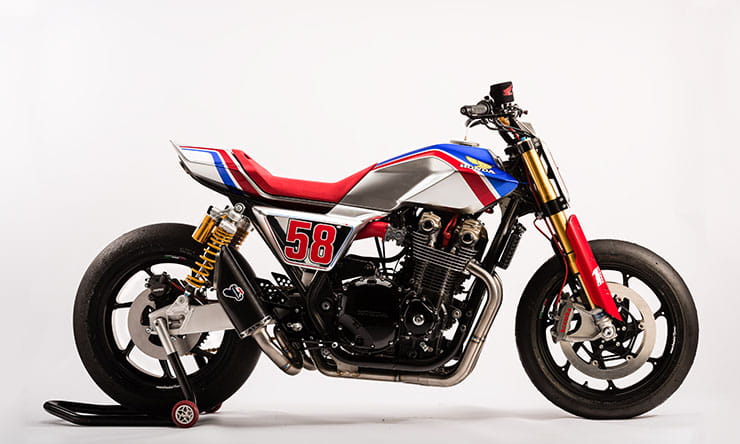 Looking like a throwback superbike racer from the Eighties, and something we might have seen Freddie Spencer or Wayne Gardner wrestling into submission back in the day, the Honda CB1000TR Concept was undoubtedly one of the biggest stars at the Milan Show.

The good news is you can see the bike for yourself from this weekend at Motorcycle Live at the NEC, Birmingham, where it will feature on the Honda stand.

Designed as an urban flat tracker for the city, Honda’s CB1100TR Concept is the most radical version of the latest CB1100 we’ve seen yet. Two new CB1100s – the standard Honda CB1100EX and café racer CB1100RS – were launched at Intermot a few weeks ago. This bike is also personally dedicated to the late Marco Simoncelli by the bike’s designer, and Simoncelli’s father, Paolo Simoncelli visited the bike at the ECIMA Show in Milan to give it his personal blessing.

We were shown round the TR Concept by Honda’s Chief Project Designer from Honda R&D Europe in Rome, Valerio Aiello.

He said: “I wanted to create a custom based on the CB1100. I first thought about a café racer, but we already have that with the CB1100RS, so I decided to create a bike that gave the experience of a flat tracker. I know the four-cylinder motor is not typical of flat track. Think of it as a flat track circuit in the city, Monte Carlo circuit maybe?”

The basic CB1100 receives a new tank designed to give a slimmer look and inspired by motocross where it meets the tank. There’s a double exhaust set-up just like MotoGP, with one exhaust under the seat and the other exiting on the side of the bike.

On top of that, 17" race wheels are fitted along with Pirelli slicks. There’s Ohlins shock absorbers, Ohlins forks and Brembo Monobloc radially-mounted calipers too, plus a whole load of Rizoma parts and a GoPro camera hidden in the number board at the front. Presumably for filming urban flat track racing?

Personally, we love the bike, but you can make your own mind up by seeing it at the Honda stand at Motorcycle Live. 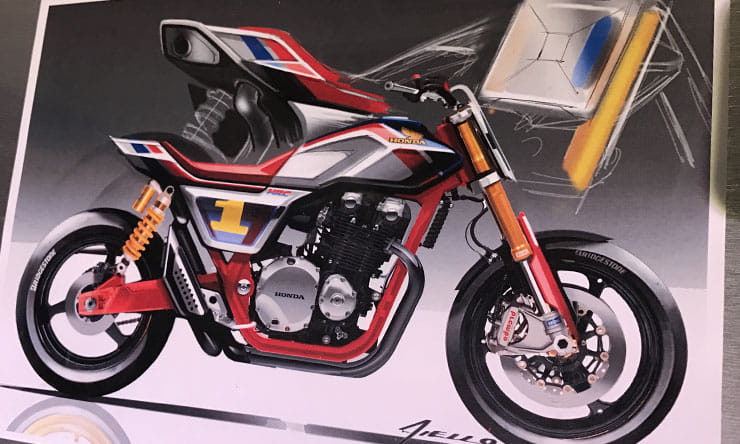