It’s a sure sign of the popularity of adventure bikes when it’s prompted the creation of a whole new class – machines with the style and ergonomics of true adventure bikes but with no intentional off-road ability at all.

Confused? Don’t be, fake off-roaders became hugely popular in the car world with 2WD SUVs such as the Nissan Qashqai or Ford Kuga long before the fashion spread to bikes. Today, though, they’re everywhere – and with good reason: many of them are truly great bikes.

Still not sure what we’re talking about? Think of the original Suzuki V-Strom or Ducati Multistrada; consider, too, Triumph’s first 1050 Tiger. Great bikes all, with tall, roomy, adventure-inspired riding positions, comfort and distance appeal, but none with any iota of ability in the dirt.

Zoom forward to today and the choice is bigger and more bewildering than ever. The good news, of course, is that there’s so many there’s a ‘road adventure’ for everyone, whatever your ability and budget. The bad news is working out what you should go for, so, to help, here’s our pick of ten of the best, in ascending price order… 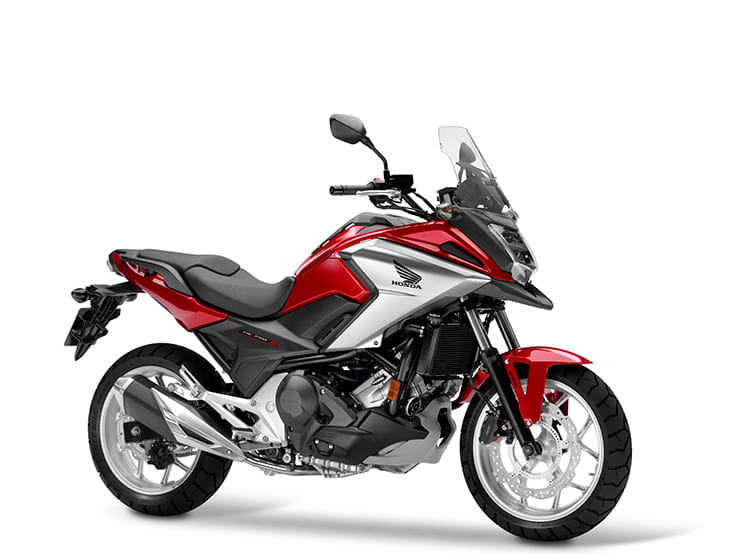 When it comes to novice-friendly, budget-oriented bikes you can trust, Honda have long been better than most and the same is especially true in the ‘adventure bikes for the road’ category. Without even featuring the excellent, A2-licence orientated CB500X (we decided to stick to larger, 600+cc machines), the Japanese giant is well represented, in fact the NC750X pretty much redefines  ‘user-friendliness’. It’s the adventure-styled variant of Honda’s three bike-strong NC ‘New Concept’ family, along with the roadster NC750S and Integra maxi-scooter. All share the flexible, friendly and frugal, low-revving 745cc twin derived from the Honda Jazz car engine. All have Honda’s optional, clever, semi-automatic ‘DCT’ Dual Clutch Transmission gearbox (for £7519 in the X’s case), all are simplicity itself to ride with low seats, easy comfort and yet, with, 54bhp, reasonable, motorway-capable performance and all have commuter-friendly features such as a clever storage box in the (fake) tank. The X, however, is by far the best looking and most long legged. No, it’s not exactly thrilling or saucy, the X is, however, brilliant, affordable transport at a good price. No wonder it’s proved so popular. 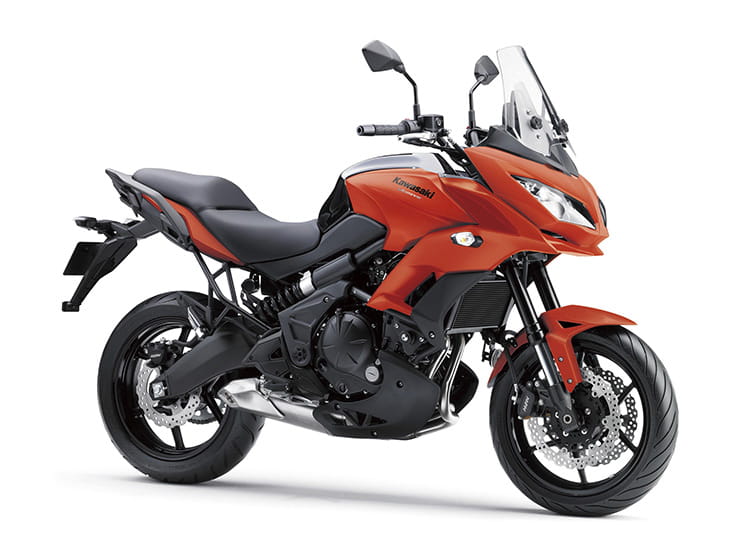 Kawasaki were one of the first to offer a road-orientated adventure bike when it launched its first Versys 650 – basically a more upright, long-legged, adventure styled version of the brilliant ER6 parallel twin – back in 2006. It was a bit of a slow-burner then, mostly due to slightly odd styling, but it’s been updated significantly since and the latest version is no longer an ugly duckling, in truth it’s probably one of the best value, most versatile all-rounders you can buy. The perky, 649cc parallel twin now puts out a decent 68bhp; its chassis, complete with fully-adjustable suspension, is as fine-handling as ever; it’s comfy for two, good value and today it even has useful things like a gear indicator and an adjustable screen. And all of that, for a fraction over £7K, is something of a steal and makes you wonder why you’d need to spend more on any other bike. In fact, save your money and spec the Versys up with some luggage instead. A truly great all-rounder. 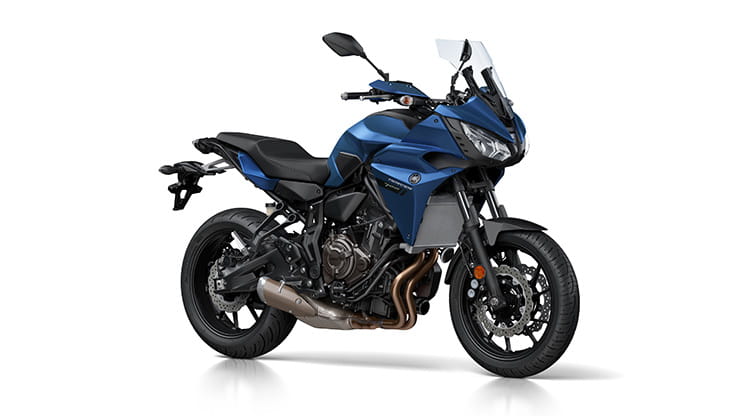 If there’s one bike around the £7K mark that could tempt us away from buying a Kawasaki Versys, the brilliant Yamaha Tracer 700 is it. Updated with new styling and a few tweaks for 2018, the Tracer is the road adventure styled variant of the already brilliant and budget MT-07 parallel twin roadster. So while the lusty, fun-packed 74bhp twin and nimble, fat-tyred sporty chassis is largely unchanged, the Tracer gets a roomier seat, more long-legged 17-litre tank, welcome half fairing complete with adjustable screen and other useful goodies. An off-roader it never was, but as a sporty, budget-orientated all rounder, there are few better. 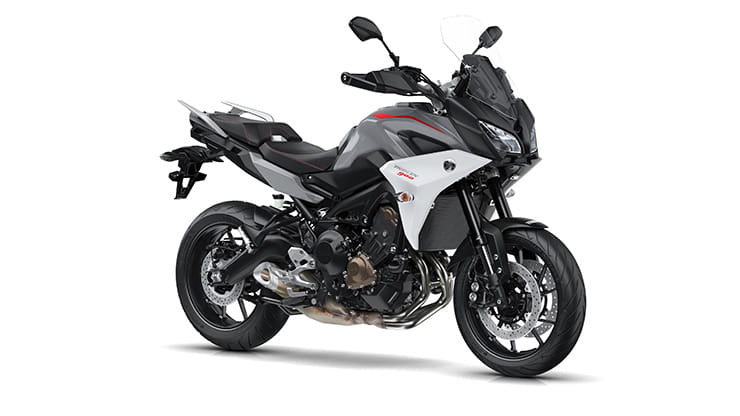 If the Tracer 700 is just that little bit dainty and middleweight sized for you and you fancy something with a bit more poke, gravitas and stature, fear not, Yamaha have that covered, too, in the form of the 700’s big brother: the three-cylinder, 849cc Tracer 900. Like the 700, the 900’s a larger, faired, semi adventure-styled version of an MT roadster, in this case the 700’s modular brother, the three cylinder, MT-09. And, again, as the MT-09 is such a lusty, fun-packed but affordable success story in its own right, its no wonder the Tracer 900 is also lively and great fun, but with added comfort, distance appeal and all-round practicality. Best of all, though, like the 700, the Tracer 900 was also updated for 2018 with more refinement and equipment, while an extra GT model, for around £1200 more, gets a TFT dash, quick shifter, adjustable suspension and more. Again, they’re not off-roaders by any stretch of the imagination, but with 115bhp, lithe handling and great versatility, you will be left wondering why you would need anything more. 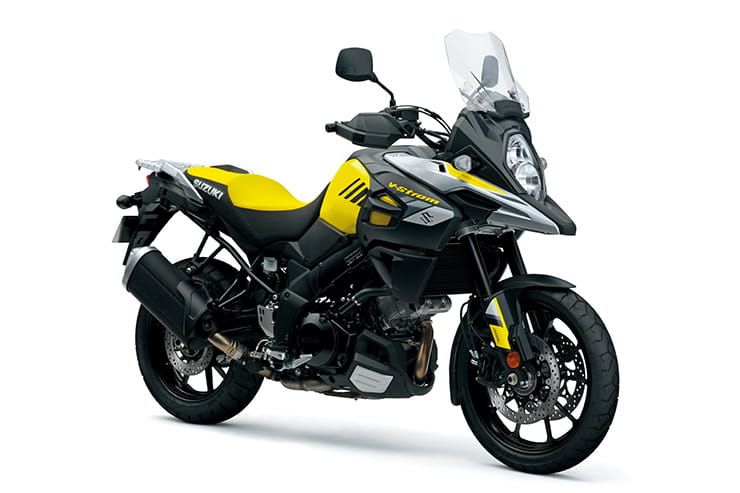 It took Suzuki a while to re-introduce its worthy, road-orientated, V-twin adventure bike after the original workhorse was deleted in 2008, but on the whole, when the reinvented V-Strom finally arrived in 2014, it proved to be worth the wait. The star, as before, is the flexible, pleasing, 100bhp V-twin. It’s no powerhouse performance weapon, admittedly, but it does the job. The chassis, too, is pleasingly efficient and, without ever dazzling, it’s more than up to the job. The best bit though, is the price: at well under £10K it’s by far the most affordable 1000cc+ adventure bike and if you fancy a few more frills the more recent XT version comes with natty wire wheels, added protection and a few nice styling touches. The V-Strom might lack the fancy electronics and luxuries of pricier rivals but in the real world it wants for little. 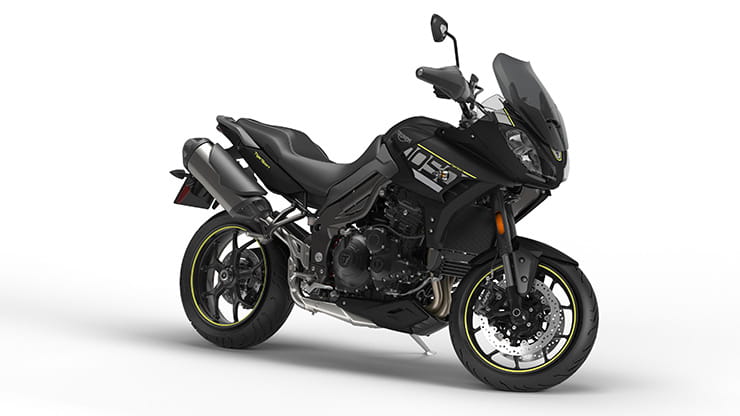 Along with the original Ducati Multistrada, Triumph’s reinvented, 1050 Tiger launched in 2006 was one of the first adventure style bikes to eschew dirt ability and focus instead on being a great, upright, versatile and sporty street machine. And, with 17-inch street wheels and tyres, sports brakes and suspension, adventure-esque bodywork not to mention Triumph’s brilliantly lusty and charismatic three-cylinder engine from the Speed Triple, it certainly delivered. Refined into the Tiger 1050 Sport in 2013 it might now be showing its age and lack the sophisticated electronics of newer rivals, but it lives on as a decent, reasonably versatile bike with 123bhp, an adjustable screen, involving handling, adequate comfort and versatility and, now more than ever, a tempting price. 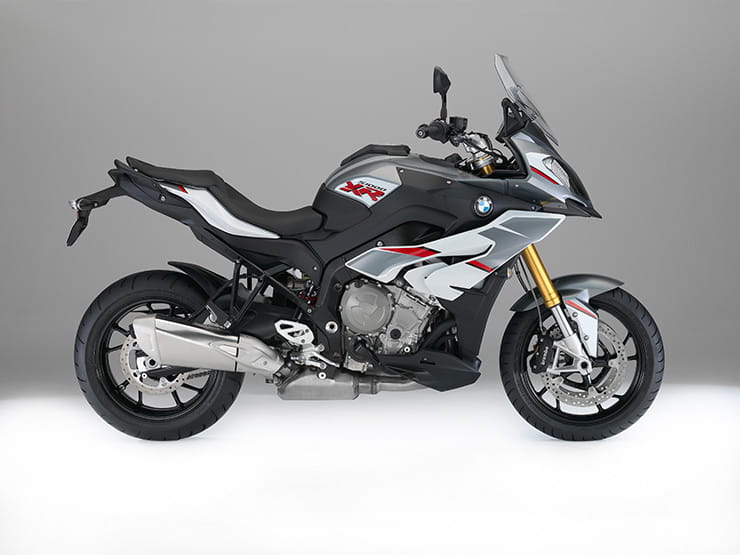 On face value, the XR is a madcap idea that shouldn’t really work – but boy it does! Based on the S1000RR superbike – or to be exact, the detuned, S1000R naked version – the XR has a fun 165bhp from its transverse four-cylinder engine not to mention full on sports brakes, suspension and more. Yet it’s all dressed up in semi-adventure bike clothing. Yet it works – brilliantly. Comfort, thanks to the upright posture, decent screen ad height adjustable seat, is sublime; performance and handling, thanks to that 165bhp yet also to a boggling array of electronics, modes, traction control and options such as Electronic Suspension Adjustment (ESA), is invigorating and sports bike fast without being out of control, while being a BMW, all manner of options, luggage and enhancements are available. Ducati’s latest 160bhp Multistrada or, perhaps, KTM’s 160bhp Super Adventure aside, so called ‘dual purpose’ bikes have never been so potent. 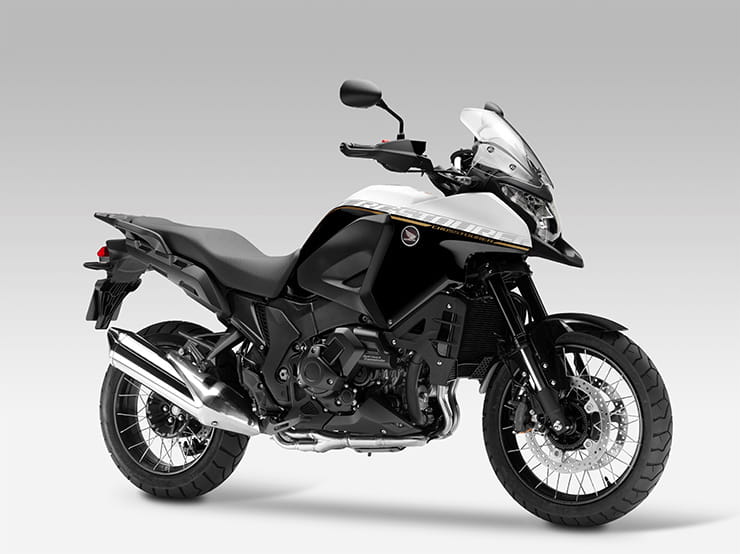 There’s no denying that Honda’s much-hyped reborn VFR V4, the VFR1200F, launched in 2010, wasn’t a great success. Despite an impressive, 160bhp V4 powertrain it was too heavy, with too small a tank and lacked the electronics and luxury of some rivals. The spin-off adventure version, however, although no game-changer, has more going for it: Handsome, with a delightful, detuned, 127bhp, shaft-drive power train, decent enough handling and plenty of glossy Honda quality, the Crosstourer is an undeservedly overlooked do-it-all machine. There’s comfort Improved with a recent adjustable screen), classy drive, enduring quality and true mile-eating ability. There’s even Honda’s clever, semi-automatic, DCT option (at £14039). As a road-orientated, big adventure bike, you can do much, much worse… 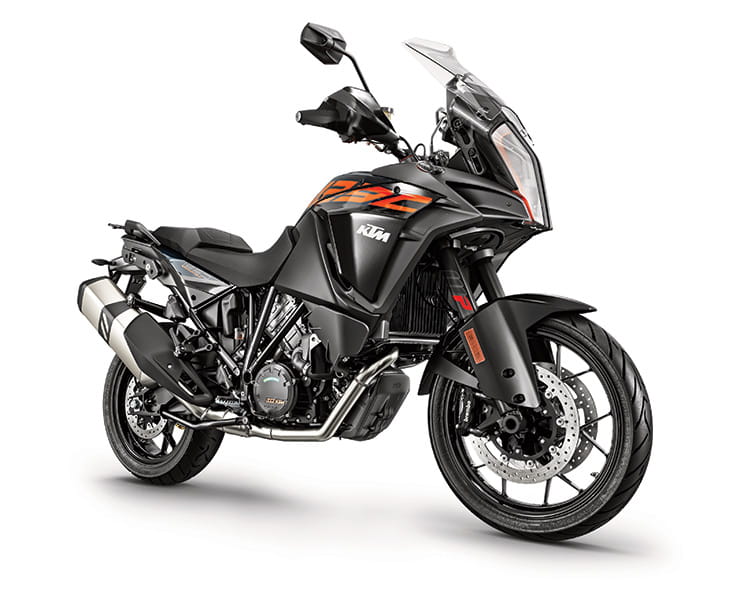 A tough one, this, as even KTM’s most road-orientated machines still probably have more off-road ability than many pure trail bikes. But as the Super Adventure S (as opposed to the dirt-targetted R version) is designed specifically for the road with street alloy wheels, tyres and more it more than deserves its place here. What’s more, with a thundering 160bhp from its 1301cc V-twin, more sporty electronics such as riding modes, traction control and WP’s semi-active suspension, than most others in this class, there’s no denying its sporting credentials. It may lack the long-distance tank and larger, more protective bodywork of the now deleted ‘T’ version, nor is it as versatile and friendly as, say, Honda’s VFR1200X, but as a hooliganistic, super motard-style street weapon, road-going adventure bikes don’t get much more fierce. Great fun. 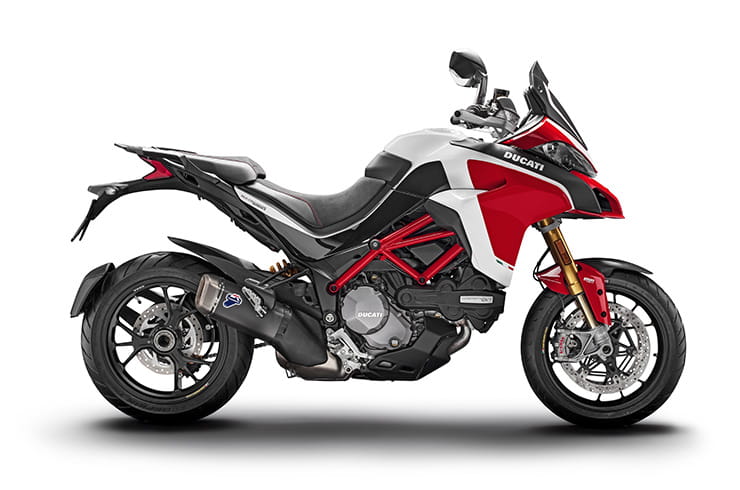 The second generation 1200 Multistrada, first introduced in 2010, single-handedly redefined the whole adventure bike category in being a full on, performance orientated ‘tall-roader’. That bike, with 150bhp and, in S trim, the first true riding modes/electrical suspension package, introduced the truly adaptable, ‘switchable’ all-rounder, yet one with adventure bike looks and sports bike standard performance. Two major updates since and the same is just as true today except now it’s got 160bhp and is more sophisticated and refined than ever. The Pikes Peak version, meanwhile, is the top of the range performance version with cornering ABS, Ducati’s switchable traction control and more than a few goodies, such as performance pipes and carbon, from Ducati’s performance parts catalogue. If you want the fastest, maddest, poshest road going adventure bike, this is the one – at a price.