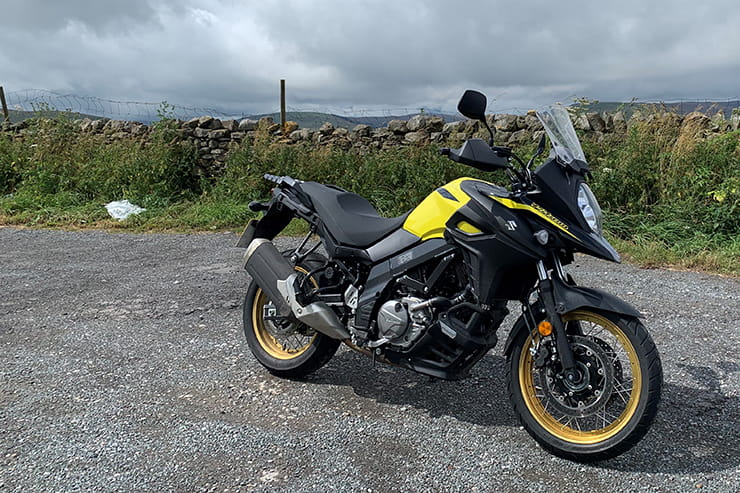 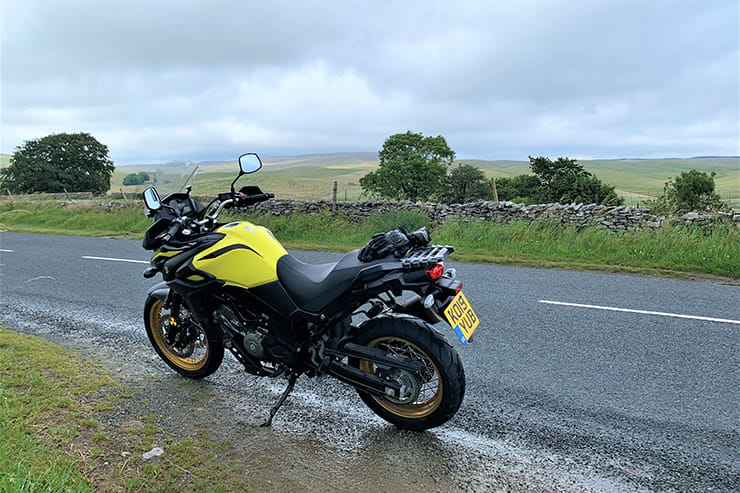 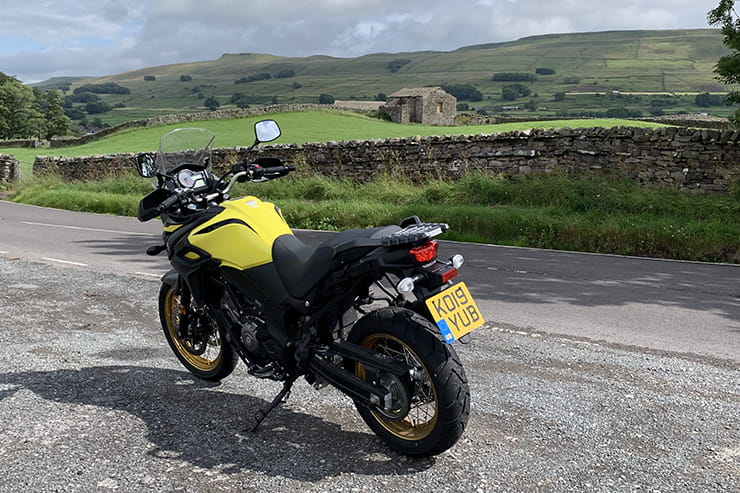 Happy birthday Suzuki DL650 V-Strom. We’ve been buying them in bulk for 15 years now and the reason today for wanting the latest version of Suzuki’s under-rated adventure bike is the same as it ever was. So much motorcycle for so little money. Since 2017 there have been two versions of the V-Strom; the basic bike with cast wheels costing £7500 and the specced-up XT version with (tubeless tyre compatible) wire wheels, hand guards and bash plate for rufty-tufty off-road cool.

On paper the 650 V-Strom still makes sense. 71bhp from a sporty-but flexible 645cc v-twin. It’s been tweaked to meet Euro 3 emissions in 2007 and then again to meet Euro 4 in 2017 and each time they work on it Suzuki make this motor, smoother, slicker and easier to use. This latest version has glitch-free fuelling letting it pull from almost tickover through to the 10,000rpm redline in pretty much any gear. There’s no transmission lash at low revs in high gears and enough remaining rpm past peak torque to let you hang onto a gear for longer if you’re feeling frisky. Oh, and it does 10mpg more than the original bike did in 2004 too. 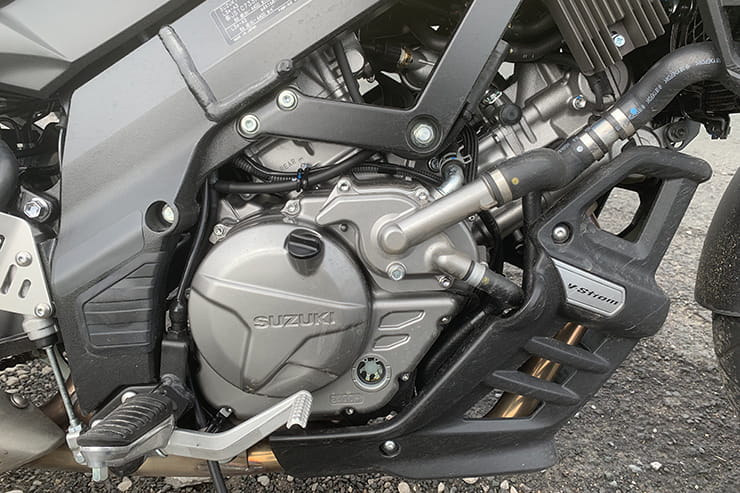 We first met this motor 20 years ago. Considered evolution has brought more power, cleaner wind and better economy too

Forget the heroic numbers that Ducati and KTM’s 1300cc twins make, smaller capacities are where a v-twin makes most sense – thrumming, not throbbing is the way to go. Suzuki’s lovely 645cc twin has proven itself to be reliable, easy to use and has the character to either thrum along making life easy or charge through the revs range making an almost audible aggressive roar. These engines were the mainstay of mini-twins racing for years and can be tuned to give 20 per cent more power being thrashed by club racers with a lot more ambition than talent and, even in race trim they’ve proved very reliable. So you, Brian-the-adventurer can be happy that no matter what you do to your V-Strom when the red mist comes down, it won’t be the engine that lets go.

80mph comes up at 6000rpm in top gear, with. Another 4000rpm still to go. Top speed is somewhere around 120mph but you need to really want to see it and have a very long straight road at your disposal.

The real performance ambition for a bike like this is to nip past any other vehicle as you work through the queue with a simple flick of the wrist and then to cruise comfortably at motorway speeds with a passenger and full luggage. The Suzuki does all this and more, aided considerably by smooth fuel-injection and one of those slick Suzuki gear changes that other manufacturers never seem to match.

KTM’s 790 twin is a better engine in every respect (apart from the gearchange), but that bike costs fifty per cent more than the V-Strom and has yet to prove as reliable for as long. 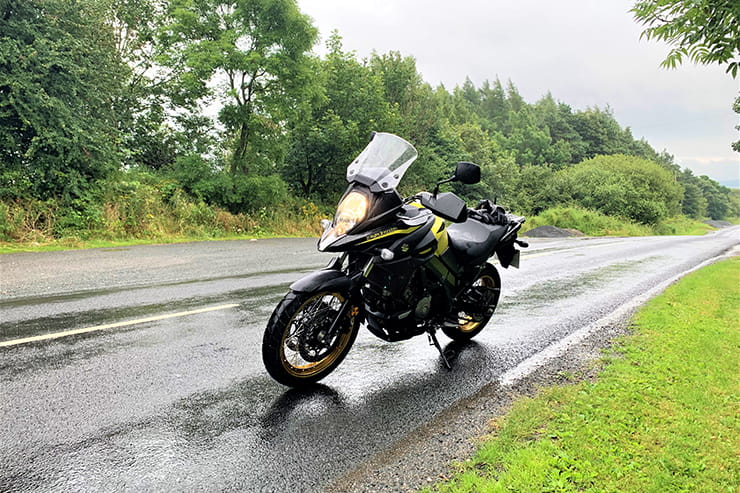 The Suzuki averaged 61mpg – impressive for a bike with the aerodynamics of a sideways piano.

On a long weekend touring northern England the bike did 63mpg on a slow trip up the A1 including half a dozen spells of slow filtering through stationary traffic. Playing in the backroads of the Pennines and the Dales it still managed 58mpg and on a much faster thrash back down the A1 on the way home it still showed 60mpg. Theoretically that gives a range of 280 miles from the 20 litre tank.

The V-Strom’s last major update in 2012 brought revised styling but no significant changes to the alloy beam chassis that’s been present since 2004. Another significant update in 2017 brought much-updated styling an engine that passed Euro 4 regs, ABS as standard and refreshing the clocks and switchgear. The chassis remained pretty much the same which was good because the old bike handled just fine. Likewise the suspension remained pretty much the same basic units front and rear. There’s no adjustment at the front and just preload at the rear. A remote preload adjuster makes life a lot easier swapping between solo and pillion settings and the narrower subframe 9introduced in 2017) allows shorter riders to feel more at home on the 830mm seat height

In the dry the V-Strom steers accurately and easily and the suspension does a half-decent job of soaking up the bumps and keeping you comfy. Bridgestone’s A40 tyres are grippy and warm up quickly. On very wet roads the bike handles equally well, with surprising confidence on some twisty, slippy surfaces. 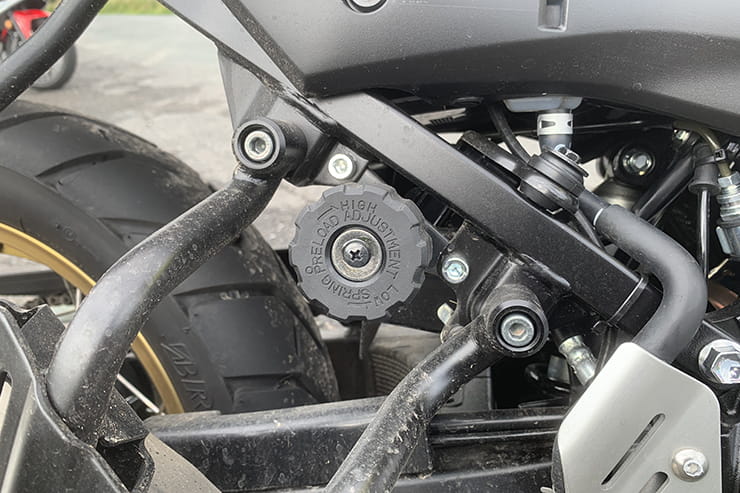 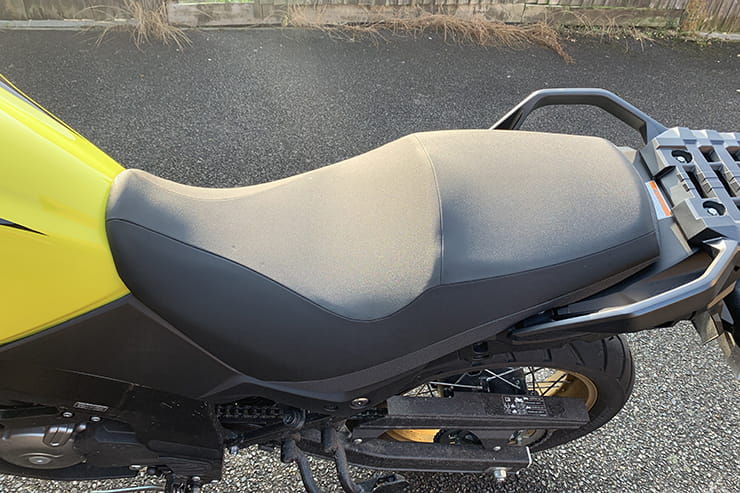 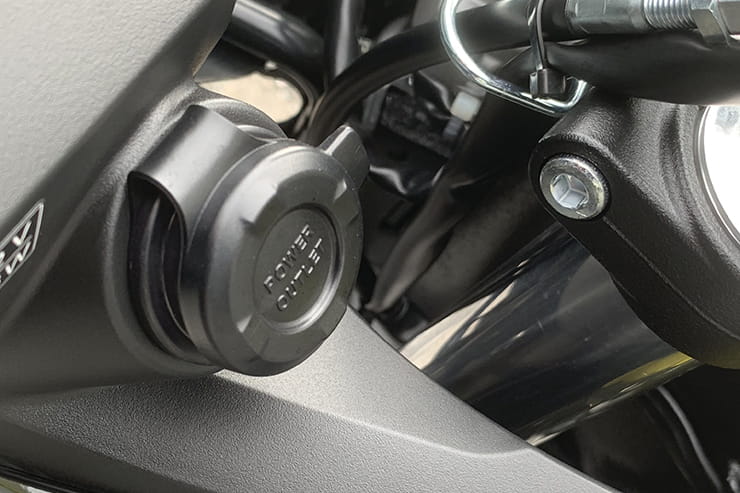 12v socket is useful, comfort seat not that comfy but the remote rear preload adjuster makes taking a pillion easy.

What surprised me was a stretch of damp-but-not-wet tarmac, admittedly in a town centre with lots of greasy roundabouts, where the bike lacked confidence when turning and always needed to run a bit wide on the exit.

I can’t explain it, but I definitely didn’t imagine it either.

At six-foot-nothing I find the V-Strom just tall enough without being too unwieldy. Since 2017 Suzuki fitted what they call a ‘comfort seat’. I’m not sure how they define comfort but it’s certainly long a high-mileage interpretation. The seat is very comfy for an hour or so, by ninety minutes things are starting to get achey and after two hours you’ll be very glad to get off. KTM’s 790 Adventure, by comparison is not quite as comfy at first but stays consistent for hours and hours.

The Suzuki’s footpegs feel slightly too high for an adventure bike – just like they always have. It’s a legacy of using a frame developed for the sportier SV650. On long motorway blasts it gets a little cramped and if you try and stand up on the pegs when the going gets bumpy the feet-to-handlebar relationship isn’t right. But the flipside is that in corners the V-Strom has a slightly more aggressive attitude than many adventure bikes, allowing it to feel a bit more focussed. 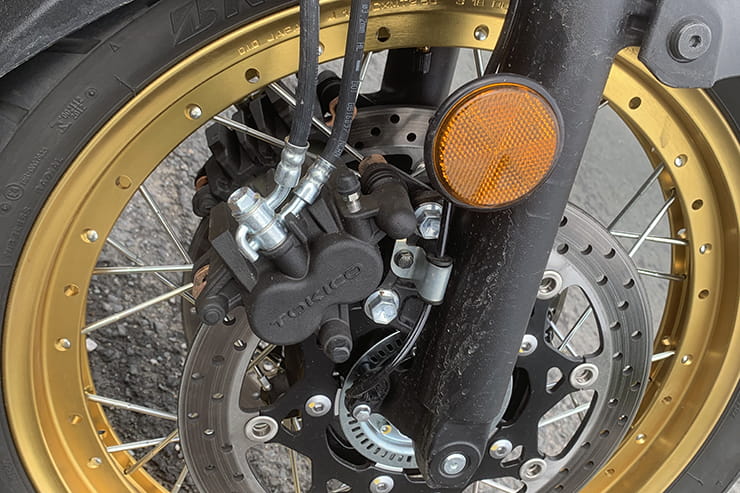 Relatively basic four-piston calipers work effectively without overpowering the soft suspension. Occasionally the rear ABS cuts-in as the front dives and lifts the back wheel slightly, but most of the time the V-Strom brakes as it does everything else – effectively and efficiently.

Two-stage traction control and ABS are the headlines here, but the truth is that the V-Strom is so easy to ride that you’ll never trouble either. The clocks are compact, but comprehensive offering all the info you’ll need including air temperature, gear selected and fuel range remaining. Mirrors are tall, -but-effective. Suzuki’s low-rpm-assist is fitted which raises the revs slightly as you release the clutch and is designed to help newer riders avoid stalling. Their ‘easy-start’ system is also present, which means one gentle touch of the starter and the motor keeps on turning till it fires. 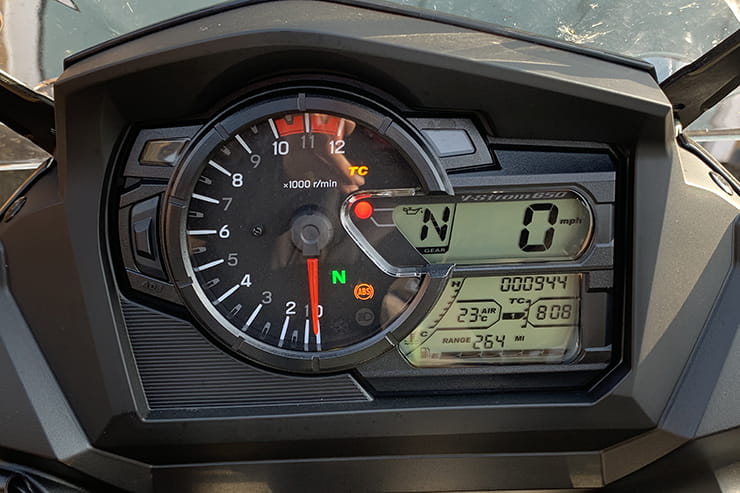 All the info you need, clearly displayed. Job done

If everyone sold at list price the V-Strom would be in the ‘good-but-not-that-good’ category. Thankfully for the Suzuki there’s a V-Strom discounting heritage going back to about six months after the first version was launched. A DL650 V-Strom has always been a bargain because huge discounts have always been applied. Expect to find a pre-registered or ex-demo example in your local Suzuki dealer carrying a significant discount that none of the competition will match. That’s what will make you choose it.

The other V-Strom advantage for buyers is that such a long model run means there is a V-Strom for everyone from £2000 for a tidy 2004/05 bike through to £6k for a year-old machine that’s just been run-in. 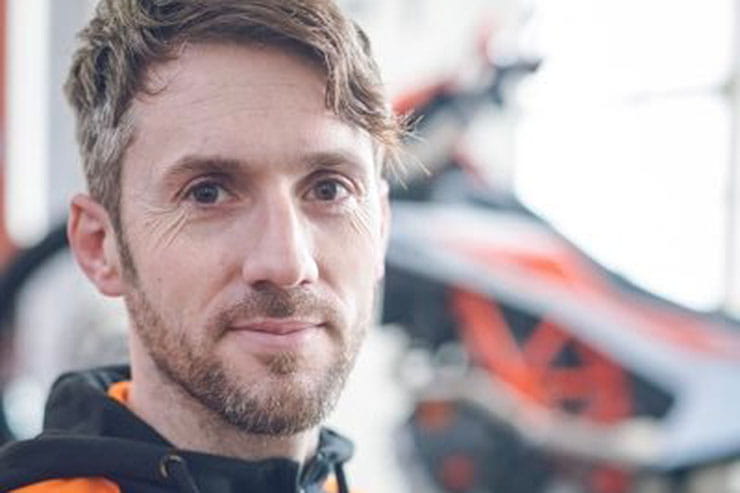 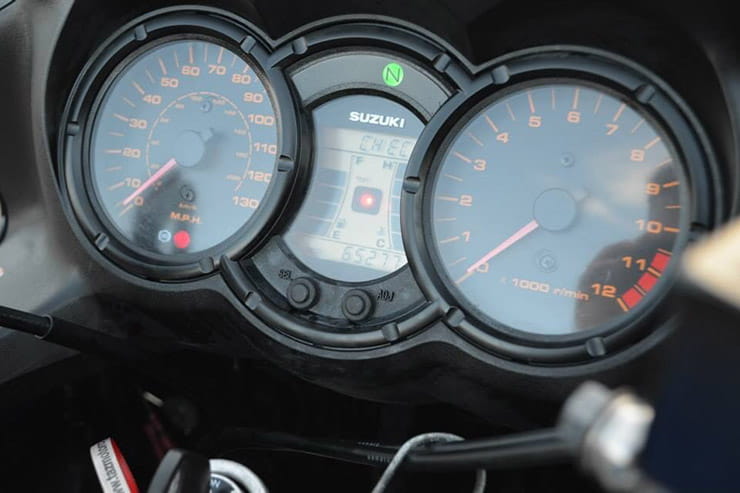 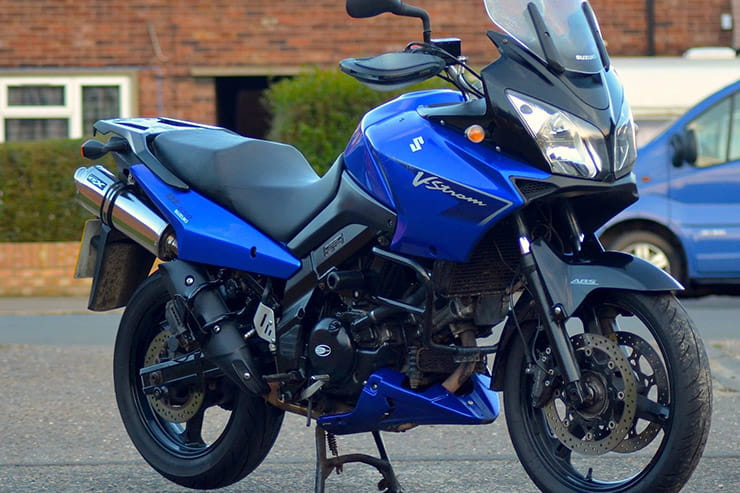 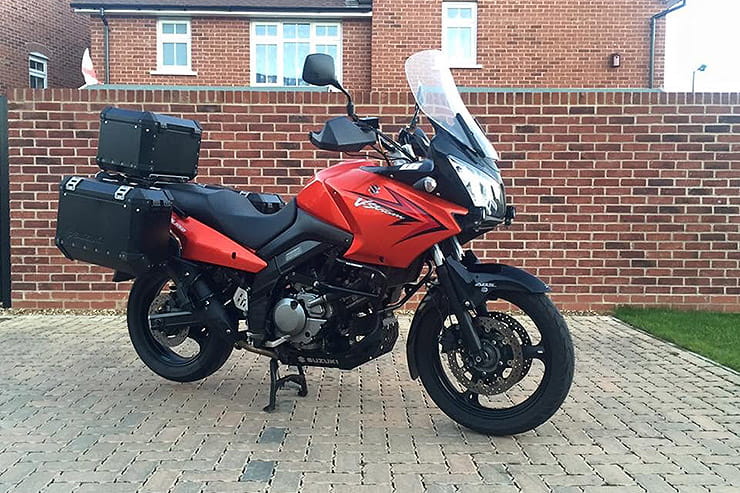 Bennetts’ PR manager did 60,000 miles on his two first-generation V-Strom 650s, what does he make of the new one?

Bennetts’ PR Manager Luke Brackenbury, has owned a couple of V-Strom 650s, covering enough miles on them to ride around the world…twice. Who better to rate the latest version?

“I’ve been fortunate to ride a lot of motorcycles in the past 21 years – easily a couple of hundred different models (maybe I should count them one day) – but the one I’ve clocked the most amount of miles and sorties on is Suzuki’s DL650.

“Back in 2007 I needed a do-it-all bike; a two-wheeled car. It needed to be cheap, reliable, good on fuel, easy to maintain, comfortable on long trips for rider and passenger, carry ample luggage and not be desirable to thieves. The DL650 V-Strom ticked all these boxes. After 50,000 miles and seven winters my K7 model honestly never let me down (there are plenty of stories to tell, though…).

“As you can imagine that such a hard life took its toll and without ACF-50 and regular maintenance of the brakes the bike would have probably got to ebay ‘project’ status much earlier. It got to a point where I needed to sell it while it was still worth something and my plan was to replace it with the second-generation DL650, introduced in 2012. I wasn’t sold on its looks and a demo ride didn’t clinch the deal, so I bought another first gen model which I only kept for a year due to landing a job with KTM.

“Anyway, I was excited to ride this third generation V-Strom 650XT with its fancy gold spoked wheels like a ‘real’ adventure bike... After 200 miles in the saddle, including a good mixture of bumpy backroads, sweeping As and long dual carriageway slogs in the day and night, I can confirm it’s very much a V-Strom 650; same comfortable riding position, underwhelming engine and underpowered brakes.

“The dash is quite fancy (if you’ve never experienced TFT), the TC is probably pointless, and the lack of cruise control is annoying, now that so many other (admittedly more expensive) adventure bikes have it. Crisp, piercing white LED headlights would be really welcomed over the dull amber of the single unit (I think the original model’s dual set-up worked better). But would I buy it? If I did the hell and high-water weekly miles like I used to, absolutely. Still the ultimate two-wheeled car that hasn’t lost its identity over the years. Boring can be exciting.” 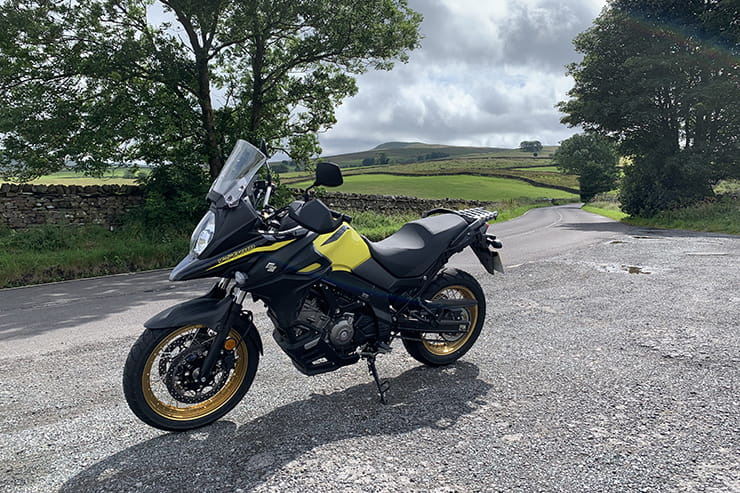 Much prettier than the old one, it’d be better with a centre stand

I can’t argue with Luke’s DL650 expertise, but I disagree about the ‘boring’ tag. I’d suggest that while the V-Strom might be less exciting than some bikes, all motorcycles are exciting and the Suzuki is no exception. The world of biking would be a better place if more companies made bikes like Suzuki’s DL650 V-Strom. It’s the perfect machine for your second big bike, after a year or so on a 300 or 400cc machine. Or maybe it’s your first new or nearly-new machine – a chance to experience a bike that has yet to be dropped, scraped or worn out through other people’s negligence.

DL650 V-Stroms are simple, solid and genuinely good at pretty much anything you will ask them to do. You’ll never get a crowd round it at the bike meet and riders of bigger bikes will struggle to damn it with faint praise. But, after the first few weeks you won’t care because you and your V-Strom will form the same kind of bond you do with your dog. Whatever you do, it’ll be there, ready for more. Instead of a sneering resentment that you aren’t good enough, owning a V-Strom provides unconditional love from your motorcycle. Soppy and daft? Of course. But true all the same.

BikeSocial is willing to bet that by month seven you’ll even have given it a name. 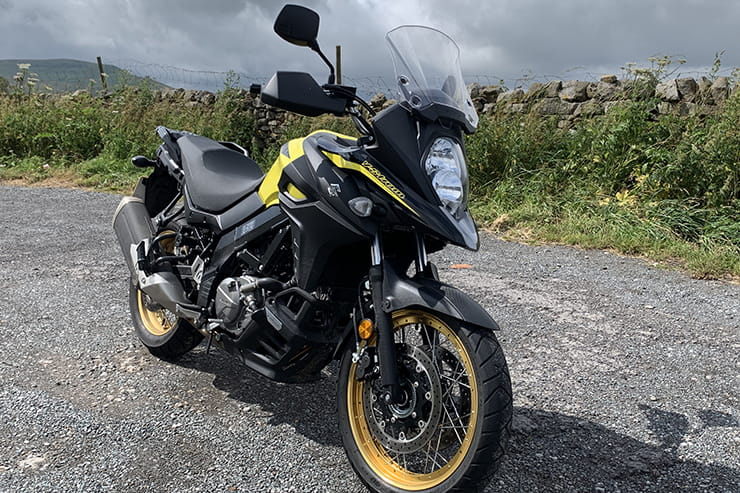