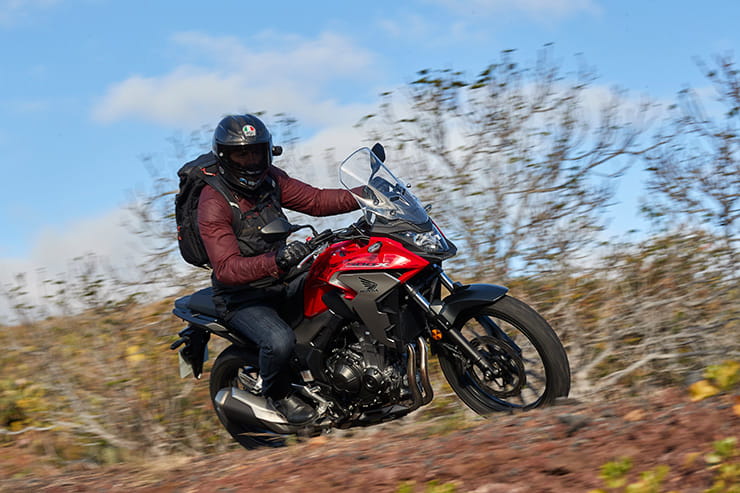 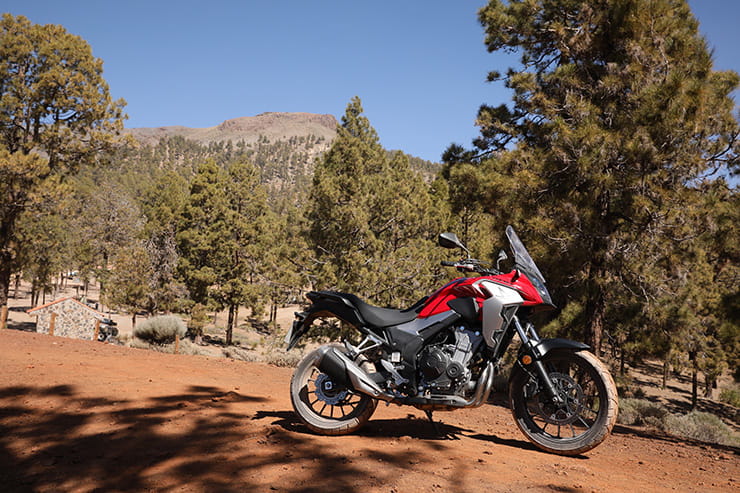 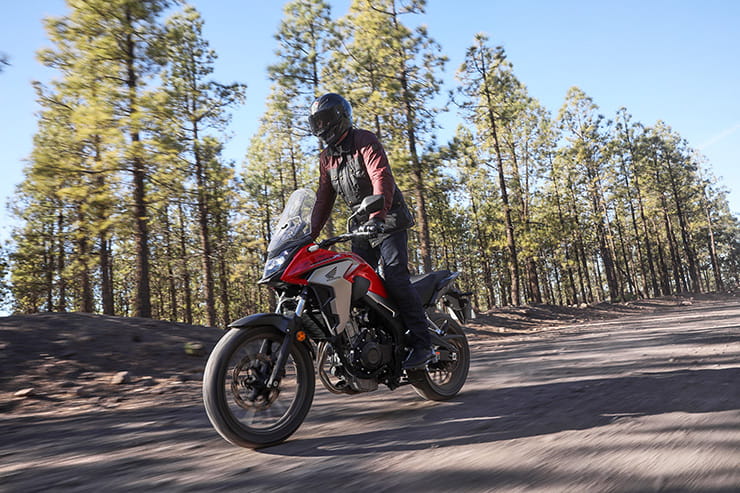 Two years ago, UK-based after-market parts specialist, Rally Raid, supersized a Honda CB500X to make it more rugged and off-road friendly by upgrading its 17” front wheel to a 19” version, beefing up the suspension and adding a bash plate, among other tricks and bits.

Now, whether it’s a coincidence or just plain old good thinking but for 2019 Honda’s version of their popular A2-licence friendly CB500X is back with a little facelift, longer travel suspension and a 19” front wheel and you no longer need to buy the 2016 base model plus the £2.2k upgrade kit from Rally Raid. In fact, the new compact adventurer is yours for little more than £6,000.

Forming part of a revised three-bike 500 range, the X is the most rugged and sits alongside a CBR500R and CB500F, sharing both a frame and 471cc parallel twin engine. And I got to ride all three at the European press launch held on the Canary Island of Tenerife.

Offering an accessible entry point into the adventure bike world, Honda have refined an already highly accomplished machine, so does the new version have the ‘X’ factor?

<< See the first impressions video from the launch further down! >> 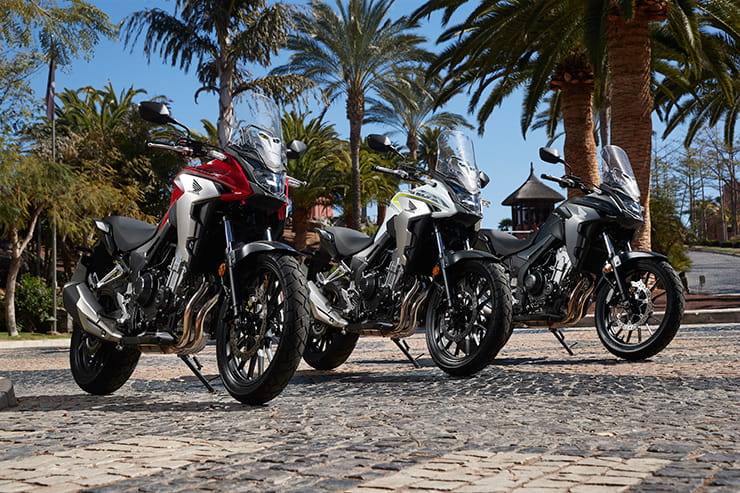 The X is available in three colours – Matt Gunpowder Black Metallic, Grand Prix Red and Pearl Metalloid White – the A2-licence friendly Honda come with price tags of £6,069 which places it in the middle of the 500 trio; £30 cheaper than the CBR500R but £510 more than the F. I reckon this represents excellent value.

The significance of the liquid-cooled 471cc motor is its compliance within the A2 licence regulations. When combined with the overall wet weight (also known as kerb weight), the Honda fits neatly at the top end of the 35kW (46.2bhp) limit. In fact, according to the Japanese project engineers joining us on the launch, the engine will actually tip the scales at 37kW but adjustments to the throttle bodies were required for the compliance. 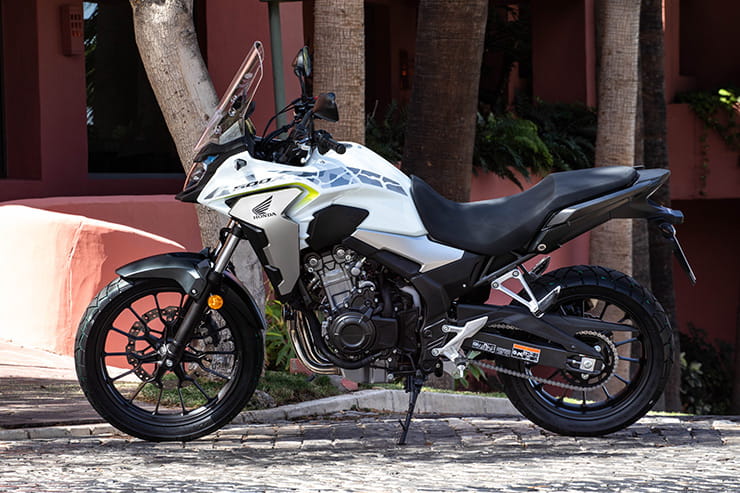 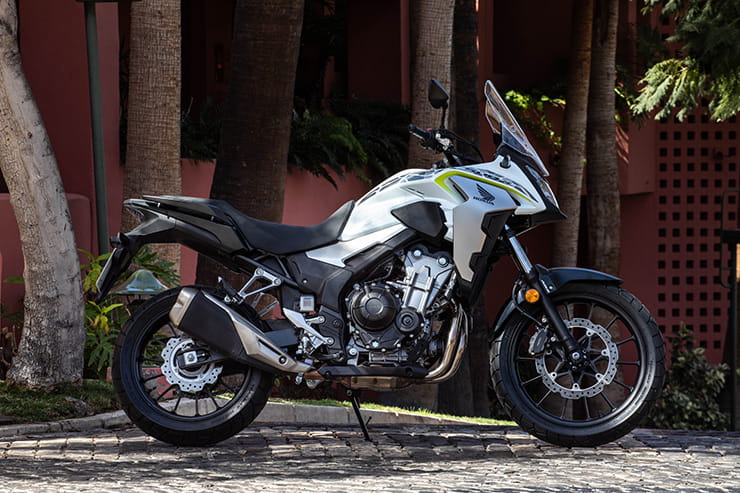 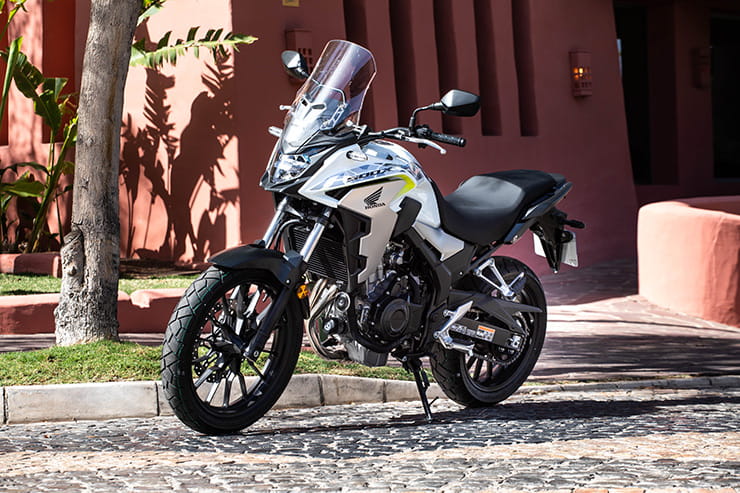 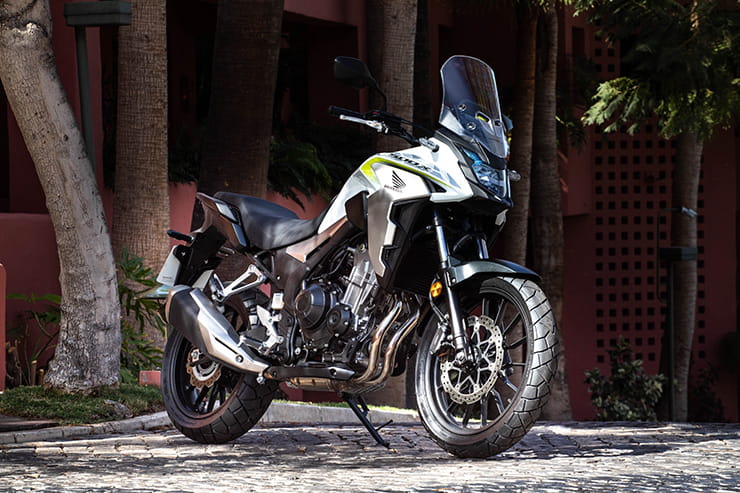 The twin-cylinder light middleweight is designed as an inviting proposition for the less experienced rider to get into adventure bike-style machinery. That said, Honda’s sales charts demonstrate that the most popular age demographic of CB500X customers over the last six years has been the 51 - 60 bracket, selling 21,000 in total and seeing a strong growth trend since 2015. So don’t assume that all A2 machines are for the younger crowd.

Sitting tall and with a purposeful road presence means a certain amount of beans are required to capture the rider’s imagination and offer the feedback needed for such a machine – you don’t put a 1.3l Eco boost engine in a 911 Porsche after all.

On paper 46.2bhp isn’t fearsome yet it comes from a competent, punchy and slightly vibey motor which has been revised to offer 4% more power and torque in the useable mid-range than its predecessor. Get the motor spinning, use plenty of revs and carrying corner speed in the shape of momentum is the key to progress on the wide open roads. Dropping a gear and giving the throttle a big handful won’t scare anyone but it will be enough for the overtake without concern of running out of steam. In fact, given the time and legality, speeds north of 100mph can be achieved. From plodding around town to full-on touring, the engine is adaptable enough as an all-rounder. Though not its intended use, hustling around the quicker country roads is just as rewarding on the X as it is on the sportier R, I found myself using all the revs on offer and flicking between 2nd and 3rd gear to ensure plenty of pull out of the tighter bends.

The addition of a new assist and slipper-clutch adds real value and quality to the gearbox. A super light clutch feeling and sharp gear selection are just two benefits, once again meaning a newer rider or perhaps one happily stepping down in cc’s for an easier rider will happily enjoy. First gear around slower town traffic can create a jerky initial throttle action but nothing to concern your physio with.

A new dual-exit muffler looks and sounds meatier than before adding further distinction between the out-going model and this more grown-up bike. 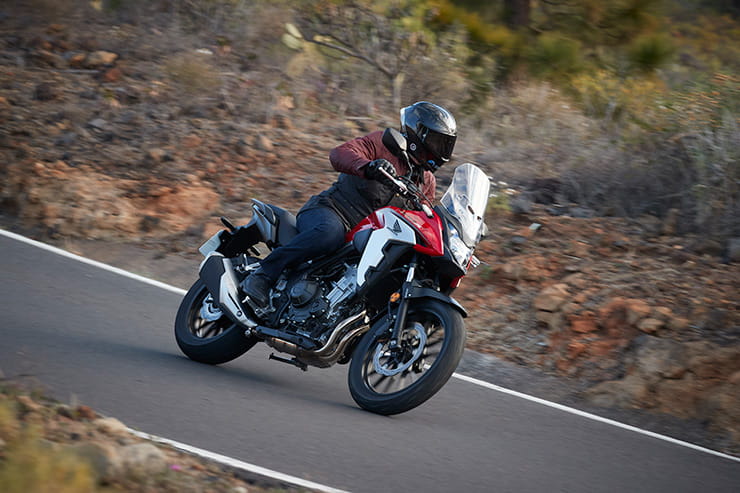 Owning a multi-purpose bike with a frugal 17.7 litre tank is good maths. On the press ride I achieved 71.3mpg according to the on-board and brand new instrument panel. Not too shabby compared to the claimed 78.5mpg, especially considering the spirited tarmac-section of the ride resulting in some hard use of the throttle and gearbox.

The fuel tank is slightly larger on the X than the R or F and should get you close to 300-miles after it’s been brimmed.

This economic engine coupled with a two-year unlimited mile warranty and Honda’s renowned reliability make for a very cost-effective package, all for just £90 per month on Honda’s own PCP deal.

I wouldn’t normally put a 46 horse-power adventure-style bike at the top of my list for those that handle impeccably and offer exceptional ride quality and feedback around the quicker corners yet the CB500X is a dark horse for a bit of what some refer to as ‘scratching’. The unchanged frame matches its flatmates, the CB5R500R and CB500F, and provides a strong and sturdy feel when in an upright position. A commanding enough riding position helps peak over the top of cars when in traffic jams while the expanded fairings are still narrow enough to filter, helped with the screen that diverts air flow nicely away and will protect your visor from many-a-bug. The 830mm seat height shouldn’t put many off thanks to the slim seat and accessible peg position. The bike isn’t wide enough to hinder leg spread when coming to a standstill either. The turning circle is good while the 197kg wet weight makes for easy off-bike manoeuvring.

The pace was hot enough on the latter part of our test ride to really push the revised suspension. The front forks have been raised by 10mm to 150mm while the stroke on the new rear shock is up by 17mm making for added ground clearance. That, plus the new 19” front and Dunlop Trailmax Mixtour tyres, adds up to a demon combination for getting the bike through the twists and turns of the Tenerife mountain roads. Naturally, a £6k price tag was never going to allow the finest top-end components and at first I found the budget suspension a little too soft and wallowy particularly at the rear. But it soon became apparent that this tough little motorcycle’s natural habitat isn’t dawdling around town and coping with sleeping policemen with much aplomb. Out onto the open roads an even off-road on the loose gravel tracks and the CB500X was much more comfortable. The suspension, and particularly the new Dunlop’s, were a mighty mix of competency.

As an entry bike into the other adventure or ‘X’ models in the Honda line-up, the CB500 version is the most agile thanks to its weight compared to an NC750X, VFR800X Crossrunner, VFR1200X Crosstourer or even the Africa Twin pair. 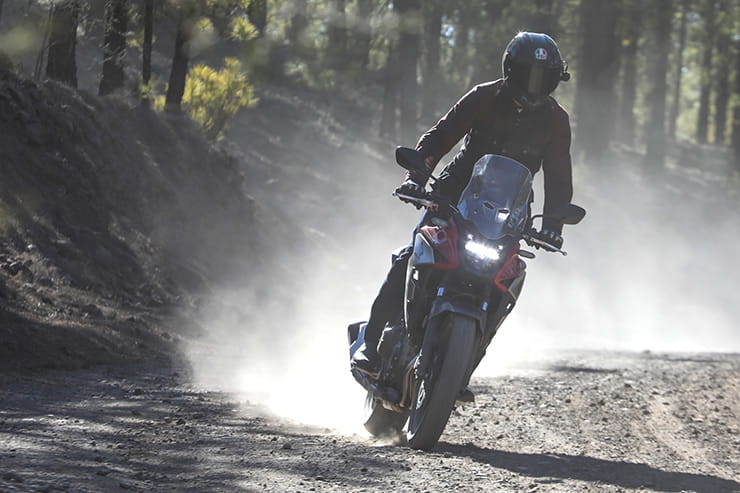 Above: There’s still plenty of off-road entertainment to be had

Evaluating brake performance all depends on the aggression with which you ride. The spec sheet shows a single wavy 310mm disc with a two-piston Nissin caliper with its ABS on the front which is more than capable at slowing the 197kg adventure style bike. The initial bite isn’t super sharp but this is no 160bhp land-swallower. The brake lever is adjustable and once caressed does exactly what its job requires.

I’m not much of a rear brake user but when riding behind a couple of journalists that are meant for a sweet waft of burning making its way into my AGV now and again.

The larger 19” front wheel plus an 830mm seat height and longer travel suspension is a handy combination for a comfortable riding position. The handlebar position is 137mm higher than the R while 111mm closer to the rider and with a slimmer seat than before, you can easily move around the saddle adjusting position for comfort. Footpeg placement offer ideal levels of ground clearance and once you sling a tank bag and top box/panniers on then 300 miles in one sitting may well be achievable.

The screen is 20mm higher than before and offers adjustability through 40mm in the two positions which require an Allen key, and as impractical as that sounds once set it’s likely you’ll leave it there for the duration of your ownership. It is an effective piece of fairing that accompanies the tougher-looking styling on the X which helps create that feeling that you’re riding a bigger bike than a 500. 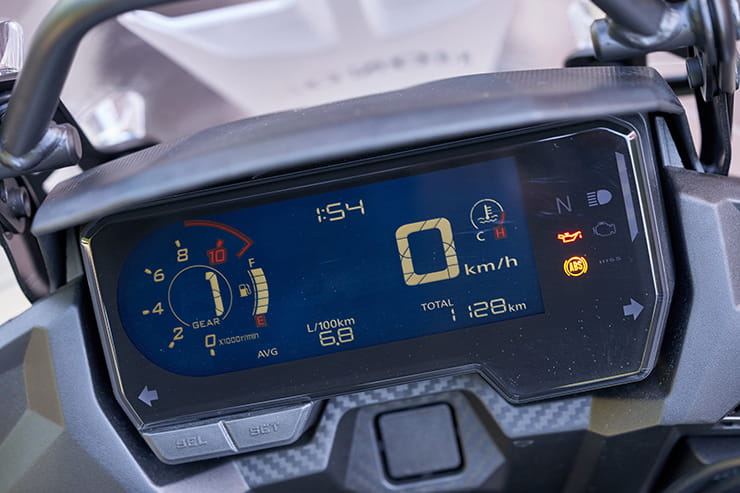 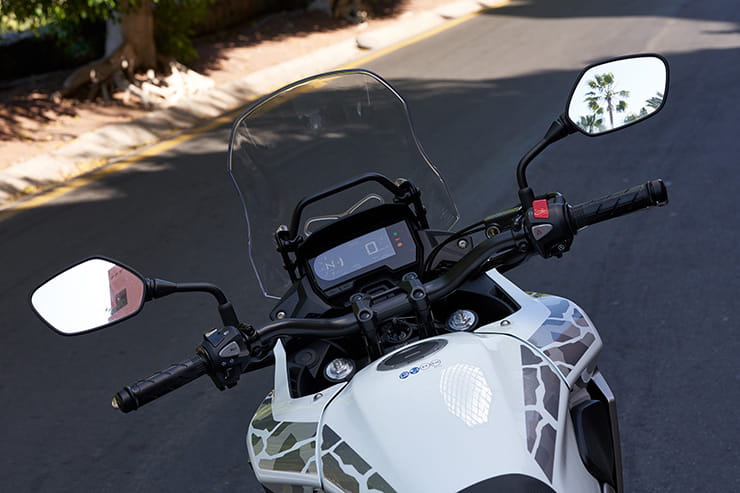 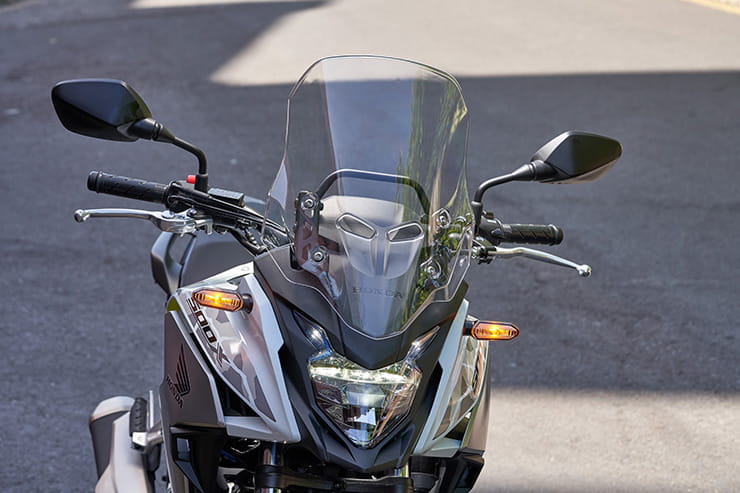 For the avoidance of confusing settings, the CB500X is ideal for the less experienced or those who simply can’t be bothered with its simple approach to the instrumentation, buttons and modes. Quite simply it has nothing to worry about. This was highlighted at the end of the dusty gravel road that joins the main tarmac road – on many machines with off-road capability you’d have to stop and fiddle about yet on the X there’s no transition. Just make sure you’re not carrying too much off-road surface crap onto the main road and be cautious with the tyres into the first couple of corners.

There is of course a shopping list full of luggage, protection, cosmetic and practical accessories including heated grips, a centre stand, a top box and knuckle guards. Though no bash plate or even wire wheels as an option for those willing to introduce the X to some green lanes.

In the middleweight class of adventure bikes the surrounding price tags of the Honda offer a range of options. Excluded in this chart purely because of space are the KTM 790 Adventure (A2 version), Triumph Street Scrambler and Yamaha Tenere 700. I’ve opted for two machines either side of the Honda in terms of price: 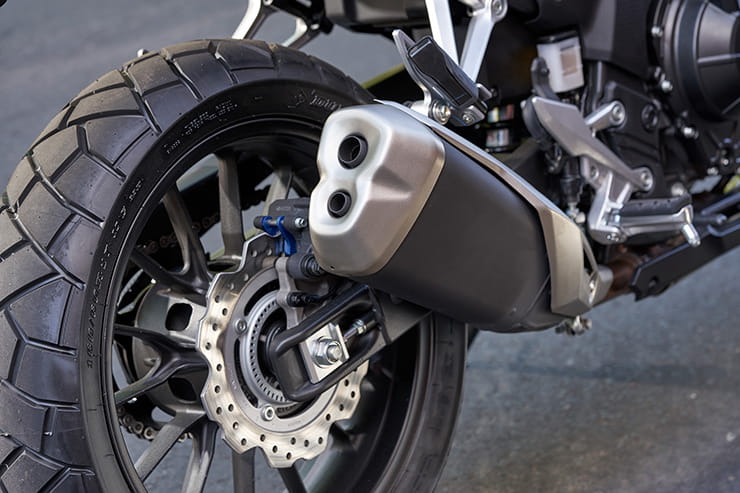 The ‘X’ is the most enchanting of the 2019 CB500 line-up. Beautiful and strong build quality with smart styling mixed with presence and versatility on the road. Let’s be honest, while the bike can handle some basic dusty trails, it’s going to spend 99% of its life on the tarmac and it’s perfectly capable too. The A2-licenees are going to love it just as much as any Africa Twin-owner looking for something a little easier to handle. 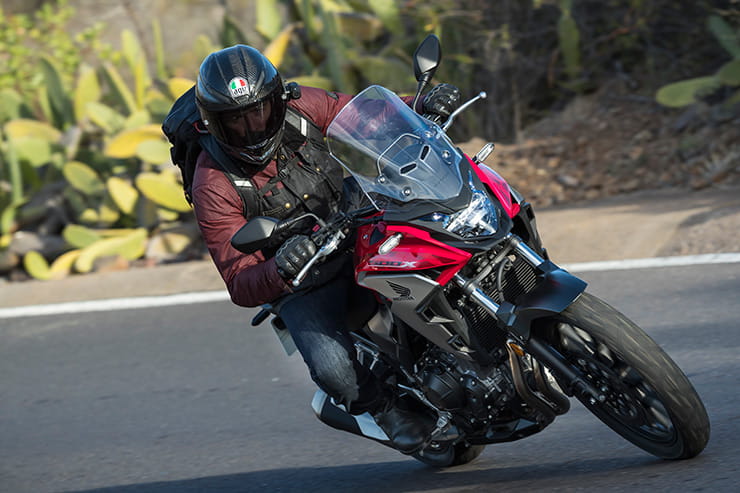