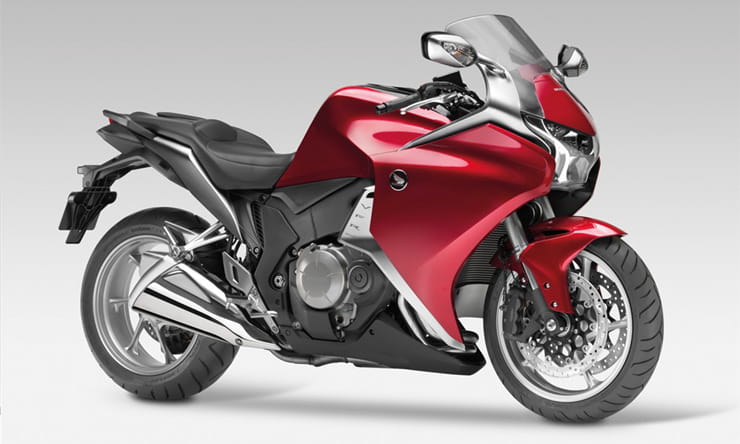 By 2010 Honda’s legendary Pan European was more than a little long in the tooth and the firm’s flagship sports tourer, the VFR800F, was also starting to show its age. Having banged the drum about their V4 heritage during the 2009 bike shows, and hinting that an all-new V4 motor was on its way through a concept bike, the VFR1200F arrived in 2010 to much excitement. Sadly for Honda, this excitement quickly evaporated…

When the VFR1200F arrived many questioned what its intended use was. Too heavy to really be considered a sports tourer, but by the same token a touch too sporty to replace the Pan European as Honda’s full-dress mile-muncher, the VFR1200F was left in a bit of a no-man’s land and as a result failed to capture the buying public’s imagination. A fact that wasn’t helped by a hefty price tag, lack of clever electronics and terrible tank range that was most certainly not appropriate for a Honda tourer. Sales bombed and despite Honda refining and evolving the VFR1200F, it remained a slow-burner until it was discontinued in 2017 as it failed to meet Euro4 emission regulations. That said, the V4 does live on in the (also pretty poor) Crosstourer… 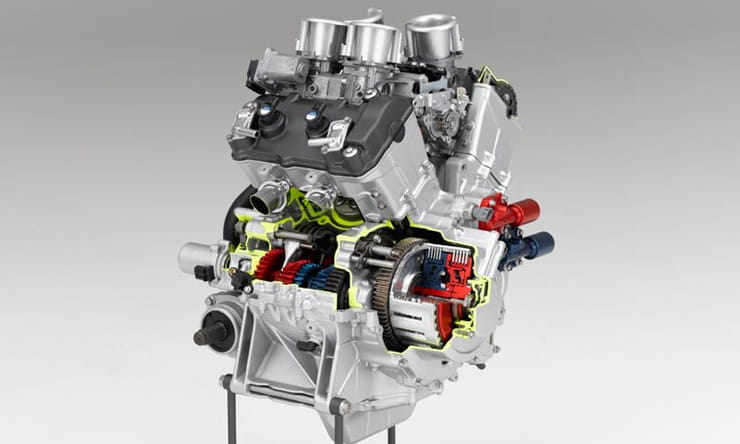 At the VFR’s launch Honda were very proud of their V4 motor, and rightly so, it is an impressive bit of technology. With a capacity of 1237cc, this V4 makes a solid (claimed) 170bhp with 92ftlb of torque, which is smoothly delivered thanks to a phase-shift crankshaft that has a 28-degree throw, something that Honda claimed reduced primary vibration and noise and eliminated the need for a heavy, and power-sapping, balancer shaft. And the innovations didn’t stop there.

Cleverly, Honda’s V4 has a unique layout and instead of evenly spaced cylinders, the VFR’s rear two cylinders are side by side and close together where the two front ones are further apart. This unique format allowed Honda to give the VFR a narrow ‘waist,’ something that helps riders get their feet firmly on the floor, an important factor in riding a heavy bike like the VFR. Especially when loaded with a pillion and/or luggage.

In addition, the VFR’s head runs a UNICAM system, which is simply a single overhead cam (a design taken from the CRF off-road range) that helps reduce weight and improve the bike’s mass-centralisation, and a ride-by-wire throttle system. Interestingly, the VFR’s clutch has a slipper function, something you wouldn’t necessarily associate with a shaft-drive tourer.

The VFR’s aluminium twin-spar chassis was designed with mass-centralisation at its heart, which is a good thing on a bike that tipped the scales at a hefty 267kg wet. Using a twin-spar diamond design allowed Honda to keep its weight down while retaining its rigidity. Honda deliberately gave the VFR a long swingarm to create a stable bike at high speed, almost as if they had been bitten by that one before (cough, Pan European…). With a low 815mm seat height and 3.45m turning radius, the VFR is surprisingly nimble for such a big bike. And if you are considering taking one touring, you may be interested to know it is rated to 463kg fully-loaded, which leaves you a spare 196kg for rider, pillion and luggage… 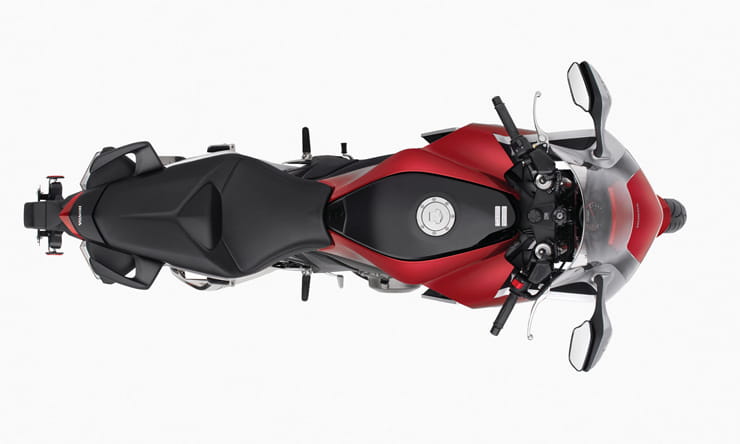 Nothing overly special, the VFR1200F relied on pretty conventional suspension that lacked any flashy electronic assists. The forks are 43mm inverted items that are only adjustable for spring preload while the Pro-Link shock can have its rebound damping altered and its spring preload set to one of 25-steps via a remote preload adjuster.

Honda armed the VFR with its Combined Antilock Braking system, which used twin six-piston front calipers and a two-piston rear caliper. This system was standard on all VFR1200F models and Honda claimed it help keep the bike balanced under braking by sharing the load between front and rear brakes.

Yes, the VFR gained a smart digital speedo with a fuel gauge and all the associated bits and bobs (the rev counter remained analogue and there is no gear indicator), but items such as heated grips were an optional extra and aside from ABS, it wasn’t until 2012 that the VFR gained traction control. Oh, the indicators are LEDs and the HISS immobilisor system is standard fitment.

The VFR has a semi-sporting riding position that isn’t the most comfortable when it comes to covering miles. If you are used to sportsbike you will find it relaxed, if you ride a Pan European you will find it too cramped. The OE VFR screen is also a touch low, but aftermarket accessory items are available to increase its height.

Pillions get grab rails as standard and the seat is well padded and comfortable. If you want to improve comfort levels, a top box provides added back support for passengers. 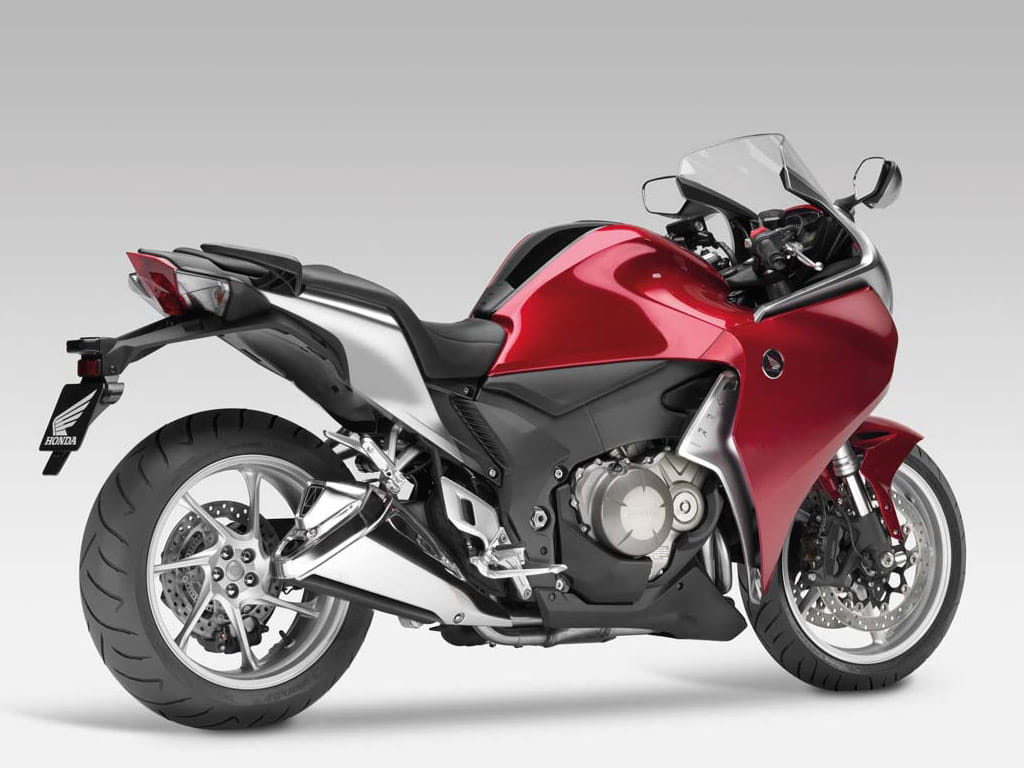 “The 1237cc V4 engine has a tremendous rush of high rpm power that makes straight lines melt away in the clear, rear view mirrors. But the drive sub 5000rpm is lackluster for a V4. Subsequent revisions for the 2012 model have improved this to the point where the engine is certainly stronger with the first feed of the throttle.
“With the use of fuss-free shaft drive, the Honda powerplant makes sense for perfect high mileage runs to foreign climes. Except for one issue – the fuel tank is only 18.5-litres in capacity and requires the same amount of fuel stops needed for sports bikes.
“Another area where the VFR lacks in making it a genuine sports tourer is the addition of long reach handlebars and footpegs, placed to mimic the sporting gene instilled within the VFR. If your body shape can handle this, then all well and good; if not, there’s a raft of aftermarket accessories available to tailor the VFR to suit.
“On the plus side, for a large capacity Honda, even with pillion and the optional panniers on board, the VFR can make short work of twisting Alpine roads and flowing A-roads. And all in a safe manner thanks to a proven dual-beamed frame and suspension that can be adjusted to accommodate the extra weight load.
“All negative comments aside, the VFR is typical Honda in the way it is put together. Covering paint is thick and shiny and every panel is neatly put together with the solidity that should last the life of the bike. Anyone looking to buy a VFR1200F as a quality-made motorcycle that is perfectly capable of doing what it was designed to do – but not as well as expected – would be happy with the VFR1200F. But as many other folk have discovered after test rides on the VFR, Kawasaki and BMW have genuine viable alternatives in the shape of the ZZR1400 and K1300S respectively.”

Check out BikeSocial's review from October 2012.

It’s very easy to pick apart the VFR1200F as it isn’t a great bike, but by the same token its unpopularity has made it quite a bargain in the used market. When you consider prices start at £5000 and you are getting a VFR model, which guarantees very high build quality, with a V4 motor and a sorted chassis – that’s not bad value. Yes, the fuel range is poor, but owners learn to live with that fact and work around it.

On the road the V4 ha a lovely blend of power and torque and is actually surprisingly fast, but the DCT is best avoided. It’s always something of a Marmite system, but the early generations are clunky, change gear too early and are slow to offer acceleration when you want to overtake. Buy a bike with a conventional gearbox, it’s much better.

The issue with the VFR1200F is that it’s not a great bike, something owners seem to know. They will always tell you how great it is, almost as if they have to justify their purchase. It’s not great, but it is cheap, well built and fast and if you don’t ride the (better) opposition you will be perfectly happy with the VFR’s performance and comfort levels. 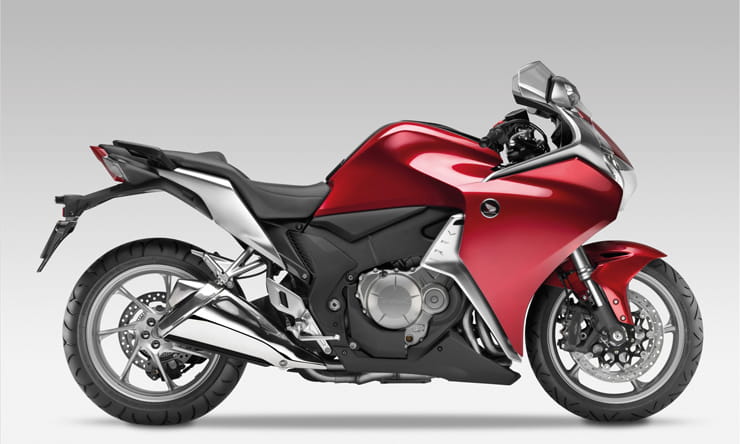 Early VFR models used to drive owners wild as the brake pistons seize at the first signs of any water, so always check for warped discs and binding brakes. This is a persistent issue. The VFR was recalled in 2010 to ensure aluminium swarf wasn’t restricting oil flow within the engine, a blockage that could lead to engine failure. Check this recall has been completed (the government’s VOSA website lists chassis numbers that are under the recall), it should have been. The VFR’s shock seems to be causing quite a few owners irritations with its damping going off in under 10,000 miles and the spring preload adjustor also being prone to seizing solid. Check all is well with the shock and that the adjustors move freely as this is a costly item to replace. If you fancy the DCT system, don’t pay that much extra for a bike with it fitted as it wasn’t enormously popular and dealers tended to have to discount the DCT bikes to sell them. Finally, always perform an HPI check on newer VFR1200F models as Honda were forced to offer very tempting finance deals in the last few years of its life to shift remaining stock. If you are after a bike with luggage fitted, buy a full-loaded one as buying the panniers separately is always more expensive.

The VFR1200F was launched in late 2009 as a 2010 model and received its first major update in 2012 when the V4 motor gained a bit more low-down torque and traction control was added. Honda also responded to customer’s complaints by improving the VFR’s economy through ECU fuel map changes and increasing its tank size by a whopping 0.5-litres – claiming a new range of 186-miles… The DCT model arrived in late 2010 and received the same updates in 2012 as well as a revised DCT system. 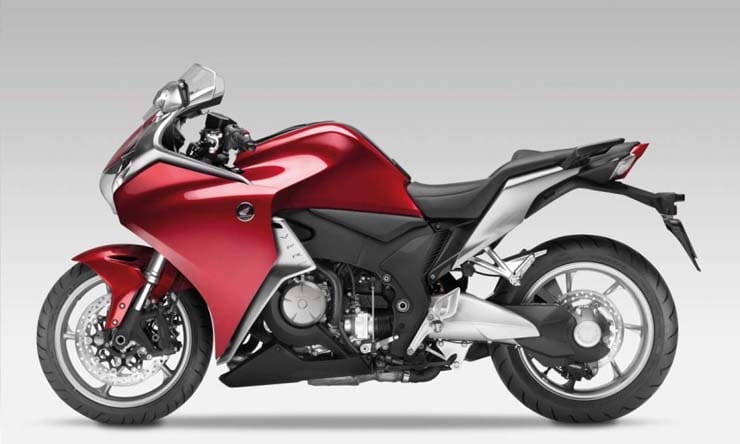