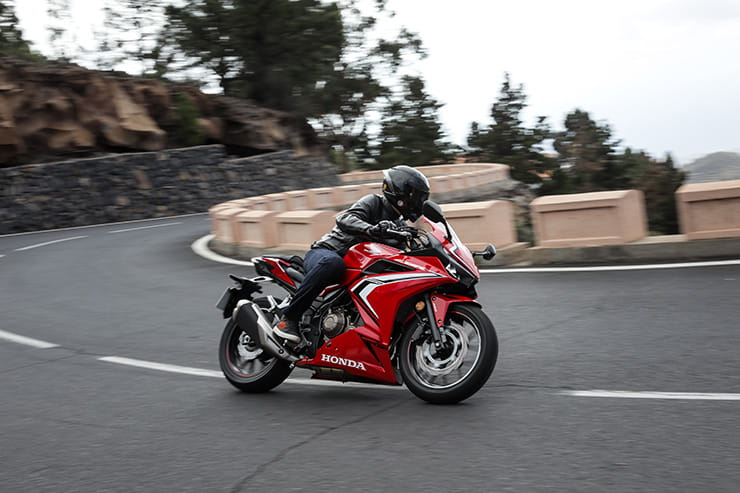 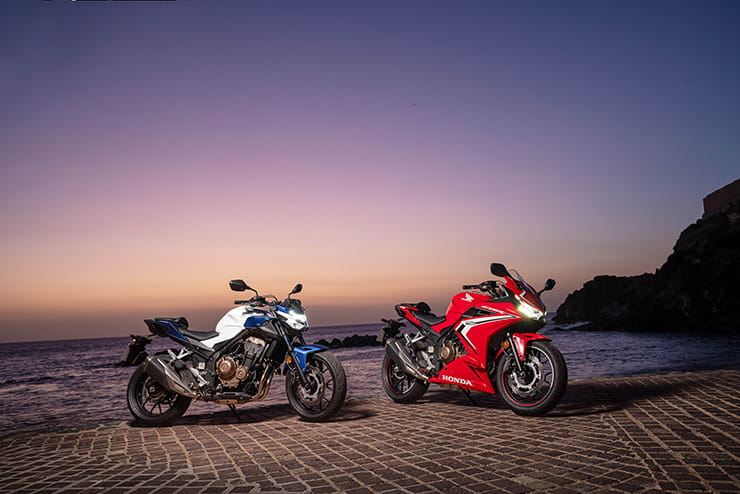 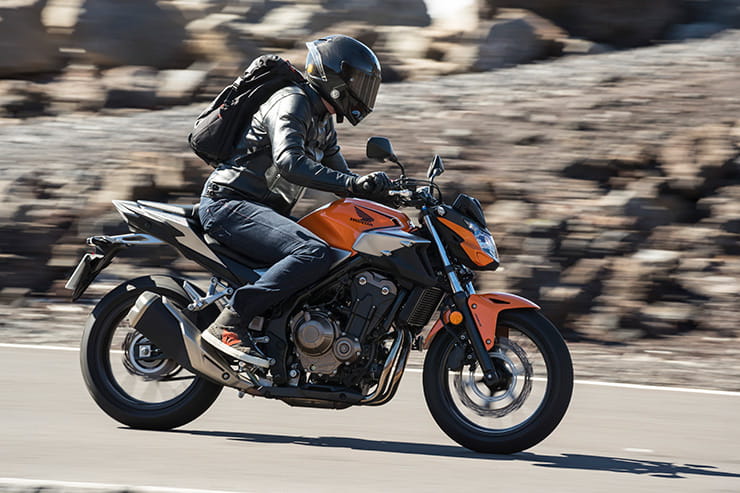 Since the three-bike 500cc Honda range was introduced back in 2013, the CBR500R, CB500F and CB500X have proved popular as riders look to bridge the gap between the 125cc learner friendly machines and some a little bigger, stronger, faster and cooler. 70,000 bikes have been sold throughout Europe during that time with over half being the naked ‘F’ model.

The super-friendly 471cc parallel twin-run machines get more than just a makeover for 2019 with weight saving, an identity and mechanical tweaks that make it even easier to ride and even more stylish high on the agenda. Off we went to Tenerife for the European press riding launch of the trio, starting with the more sporty ‘R’ and naked / street ‘F’ models. 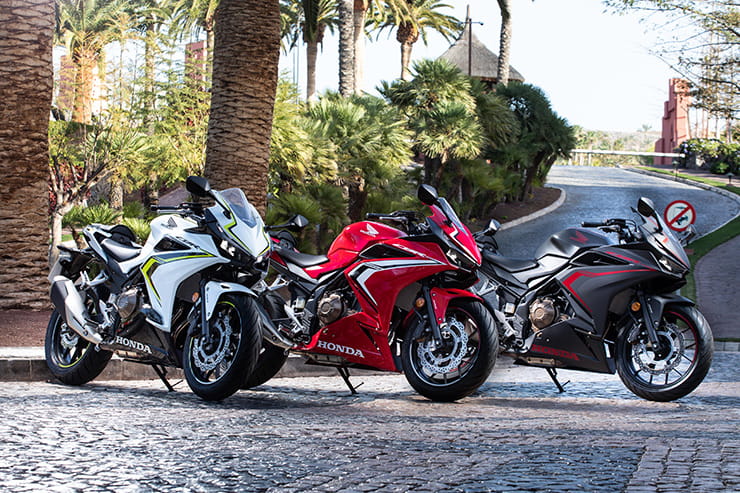 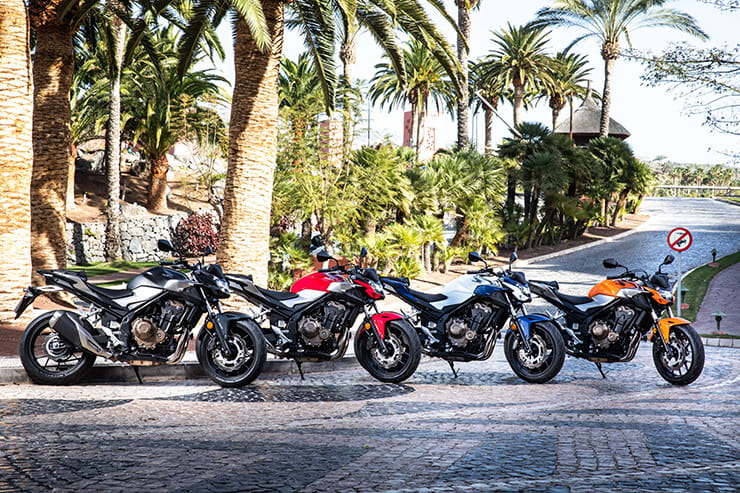 Above: Three colours for the CBR500R and four for the CB500F

The R is available in three colours – Matt Axis Grey Metallic, Grand Prix Red and Pearl Metalloid White while the F has the same three but with an added KTM-esque Candy Energy Orange. This A2-licence friendly pair come with price tags of £6,099 for the R, almost £1000 more than its main sporty A2-rivals yet £1600 off its larger capacity (and inline four instead of a parallel twin) sibling, the CBR650R.

First impressions of the Honda CBR500R and CB500F 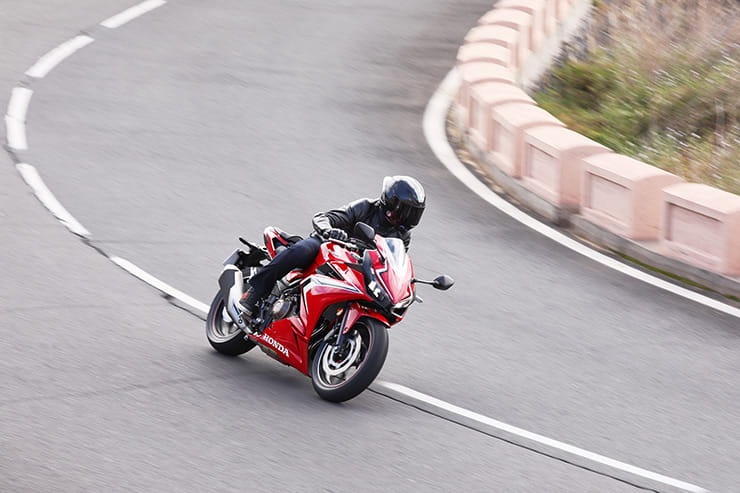 The user-friendly and liquid-cooled 471cc parallel twin remains mainly unchanged from the outgoing model and because it’s A2-licence compliant, it makes a maximum of 35kW (46.2bhp) with its peak performance coming at 8600rpm - right up towards the red line. Meanwhile, peak torque is 31.7 lb-ft (43Nm) at 6500rpm, and those figures make it the most powerful and torquey in the A2 class.

Revisions to the inlet, exhaust and valve timing have created 4% more power and torque in that key 3,000 - 7,000rpm band. Even so, an A-road overtake still requires dropping down a gear and twisting the throttle wide open. Frightening it isn’t but purposeful and powerful for its category it certainly is. 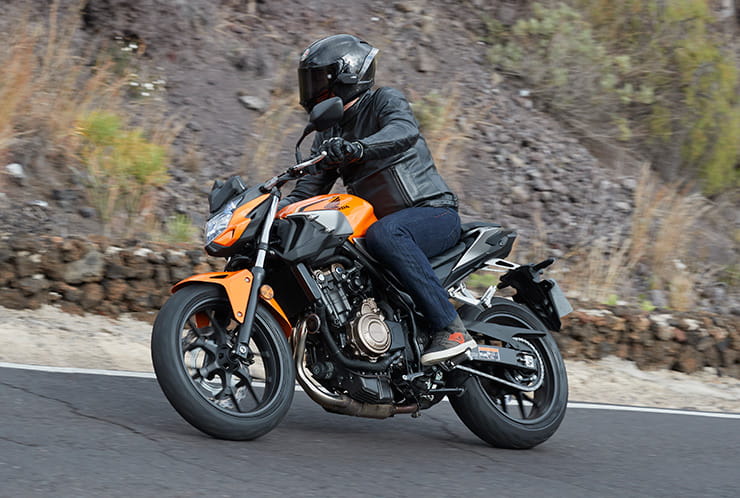 The vibey twin is lively enough through that mid-range with an energetic feel, responsive to every degree of throttle and as reactive as a 46bhp motor should be. Acceleration from 0-60mph won’t scare many but the 500’s will gallop all the way to 110mph if time, space and law permitted. There are plenty of revs to play with and the most benefit is gained in the later quarter of the range, so do what’s right, give the Honda what it craves and keep the throttle wound on until the shift light tells you to have mercy. Even so, the super slick gearbox with its brand new cogs will slip almost seamlessly into another gear with the meekest of clutch lever application. It’s an absolute gem and one that befits the attributes of such a machine and its intended audience of predominantly new or inexperienced riders.

The new assist and slipper clutch allows for that easier feel on the up and downshifts plus allows you to drop down through the gears on approaching a tighter turn or when coming to a standstill without fear of locking the rear – though I still managed it on the F model when an inadvertent foot slip mid-corner took me from second to first and almost high-sided me towards casualty.

The parallel twin is a tried and trusted motor that has a vibrancy which remains kind on your fillings and Honda have eeked out every piece of permitted power. European regulations restrict A2 licences to a maximum power output of 35kW (46.2bhp) which is precisely what the trio offer. Yet a member of the engineering team told me the engine will actually provide 37kW but they had to adjust the throttle bodies to comply with the rules.

Carrying corner speed like a 250 is the name of the game to ensure the next incline was met with enough pace. It’s all part of the entertainment the CBR500R and CB500F provided on the press launch along the perfectly smooth Tenerife roads. 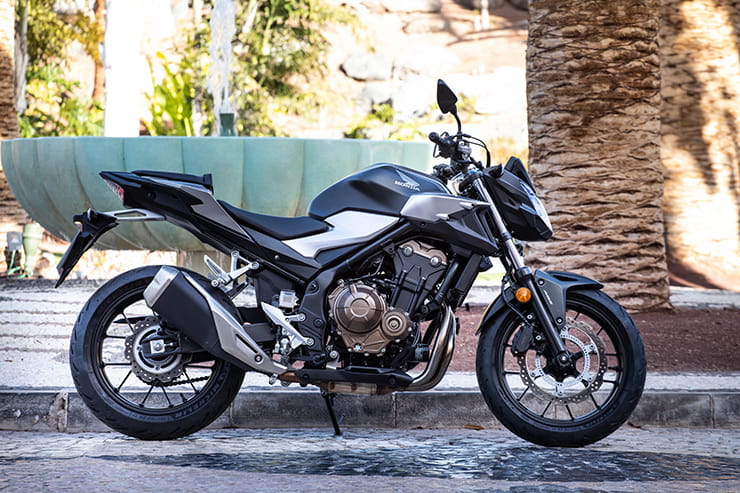 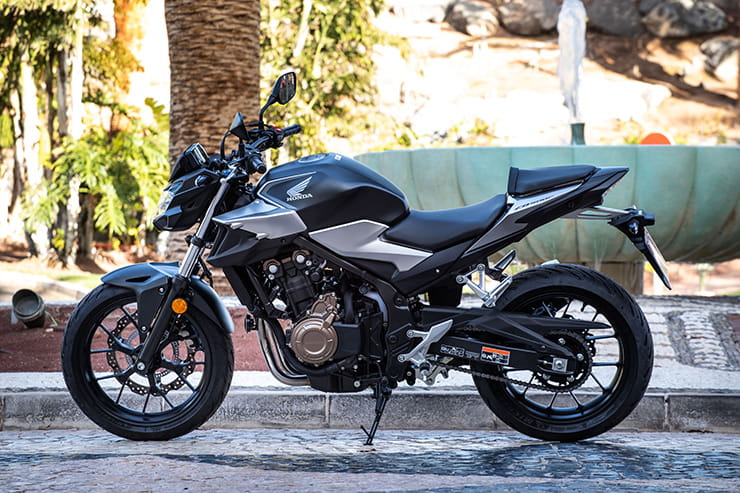 The F and R have been equipped with a larger identical fuel tank for 2019. Their 17.1 litre capacity in theory offers a huge range of +260 miles with a return of over 80mpg. Though on the press test I managed a less frugal number of 62mpg on the R and 72mpg on the F. Then again, a press test is hardly representative of real-life riding.

This thrifty engine coupled with a two-year unlimited mile warranty and Honda’s renowned reliability make for a very economical package; something worth considering when pitching it against rivals. 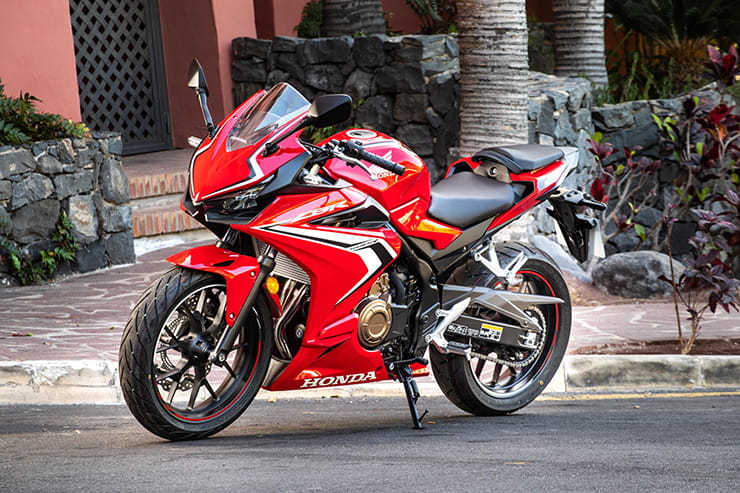 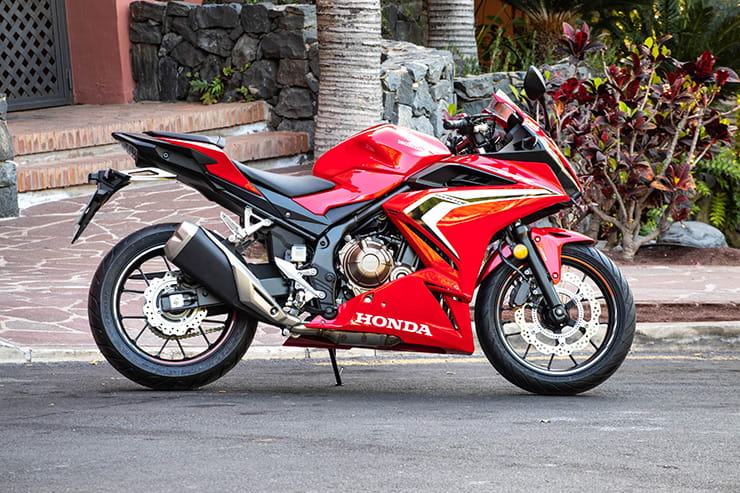 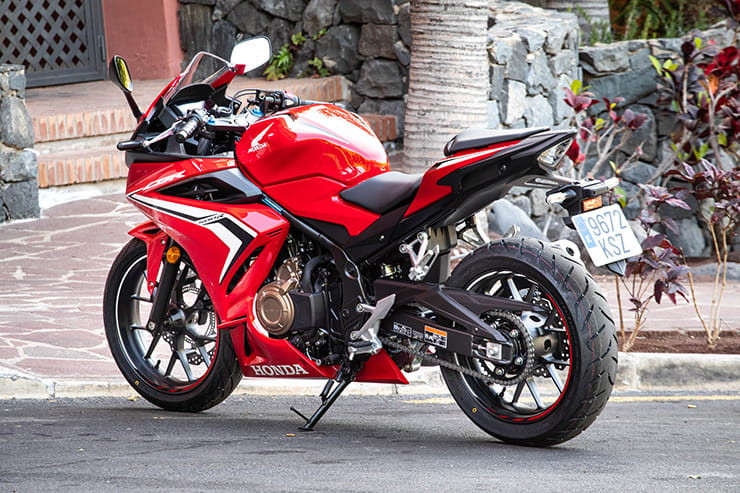 Competitively priced doesn’t always mean budget components, although compromises do have to made of course so don’t expect a set of electronically adjustable Ohlins. That said, revised front forks with new springs and oil and a new single tube unit in the rear shock have made the suspension stroke slightly smoother and given the price tag of the overall machines, it’s a quality pairing and both the front and rear suspension are both handily adjustable for pre-load. Even so, I found the standard setting to be very capable for the rigours of a press launch ride, even with my 6ft and 14.2 stone frame. If push came to shove then I could single out at the rear shock’s limitations but a really high spec set of suspension isn’t required for such a machine and its intended audience.

The riding position on the R is sportier thanks primarily to the rearranged handlebar position with the clip-ons now located below the top yoke. 36mm further forward, 24mm lower and 9mm narrower. So by ‘sportier’, I mean the rider now leans further forward by 8 degrees. An accessible seat height of 785mm with a narrow waist where seat meets tank gives plenty of comfort too – even with a 6-footer like me in control, I was happy with the peg location in terms of both riding position comfort and ground clearance.

Don’t be fooled into thinking that 46bhp doesn’t require sports-like geometry. The R can certainly move and when the revs are wrung and the stability of the racier machine is questioned, it fights its corner well. As lithe in the fast, sweepers as it is in the tighter 2nd gear hairpins, the steering, coupled with the new suspension, is precise and predictable. Dunlop Sportmax’s do a reliable job and coped well with anything I threw at them, so I’d be happy to recommend them as capable rubber for the less experience rider or to those who aren’t hell bent on achieving knee down heroics at every roundabout.

A new subframe, lighter weight fairings and a new battery all contribute to the 3kg weight saving on the R which now tips the scales with a kerb weight of 192kg where as the F comes in at 189kg, 2kg less than the outgoing model. The build quality offers longevity and reliability but adds to the overall weight when compared to a Ninja 400 or MT-03. Those new thinner plastics are used on the striking styling of the R – matching the look of a CBR1000RR (Fireblade) and the new CBR650R, the red colour option looks grown-up and fast! Matched with the detailing on the wheel rims and Honda have got it just right by designing their sportsbike for the younger or newer generation with desirability. They even come with MotoGP-inspired winglets.

On the CB500F, a pair of Michelin Road 5’s are the tyre of choice when they come out of dealerships. They also offer progressive grip as the lean angles increase. Tenerife’s tarmac was both grippy and smooth so I’ll reserve judgement on the all-around performance of the Dunlop’s and Michelin’s until the bike is tested on the often-hideous UK roads in the winter.

Meanwhile, the low, side-mounted exhaust is treated to an upgrade too – a more upturned silencer angle fits nicely with the revised and more aggressive styling. It now has twin outlets and revised internals which help breathability through the system and also add a little extra burble to the twin cylinder noise particularly at the higher revs that this engine pines for. 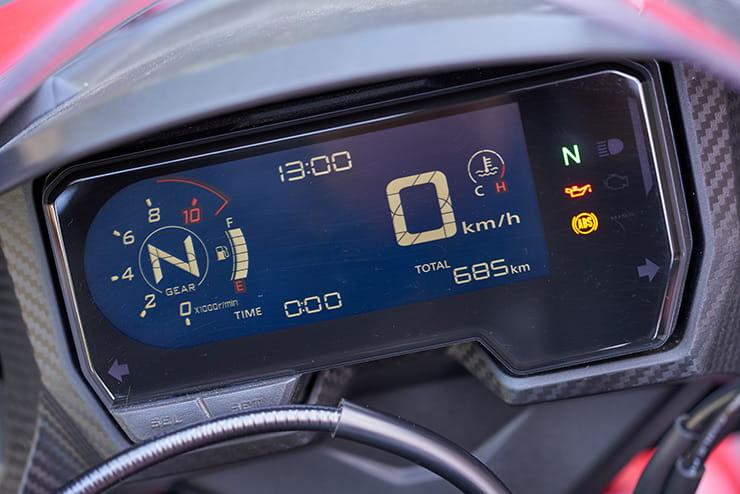 Above: the new LCD instruments as used on both bikes. Sleek but tricky to see in bright sunlight.

The two-piston Nissin calipers equipped to the 320mm single disc on each bike lack the sharpness at the initial bite but offer plenty of reliable stopping power without the ABS kicking in.

Whipping around town or on the commute and the two Honda’s give enough comfort with their standard seat height of 785mm offering a handy compromise between accessibility and enough room between saddle and foot pegs. The neutral riding position of the F is a very good thing while the material used still allows for movement around the fuel tank accentuating weight transfer into the corners. 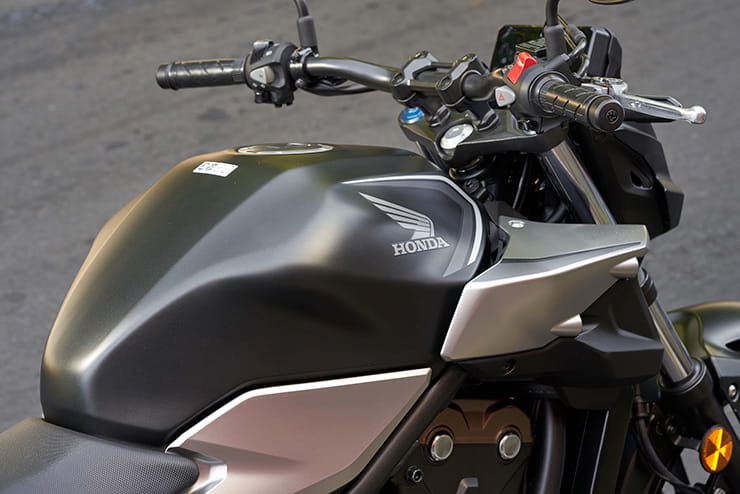 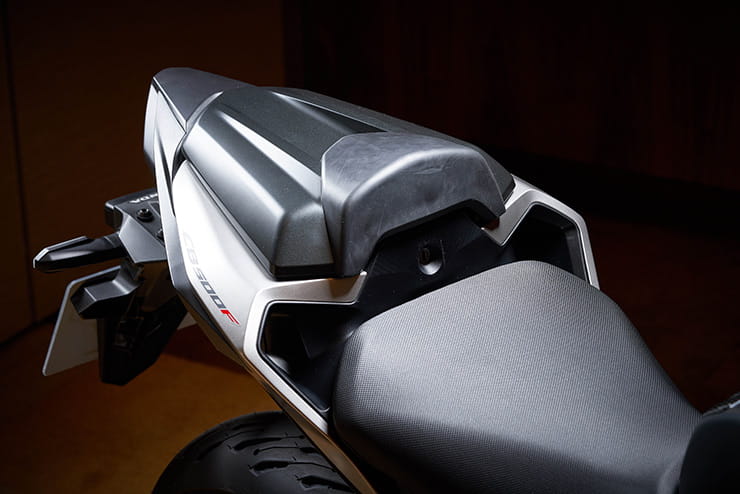 Above: only tiny pillions need apply

On the CBR, the extra fairing which happens to be wider than the outgoing model, gives more weather protection. The riding position may be the sportiest of the 500 trio but is no Fireblade when it comes to weight on the wrists and encouraging a full racing tuck. With that extra protection from the bodywork, the R would be the more comfortable for any kind of distance and with parts of the accessory range dedicated to luggage and comfort then there’s no reason why big miles can’t be covered. Both bikes are more than capable at reaching and staying comfortable at motorway speeds.

The essence of a bike designed to coax the younger or more inexperience audience towards the bigger machines in the range is to keep confusing electronics to a minimum. No traction control settings, rider modes or wheelie control levels can be found here. Even heated grips are optional at £470 inc. VAT but come as part of the £430 Comfort Pack which also includes a High Windscreen and 12V Accessory Socket. 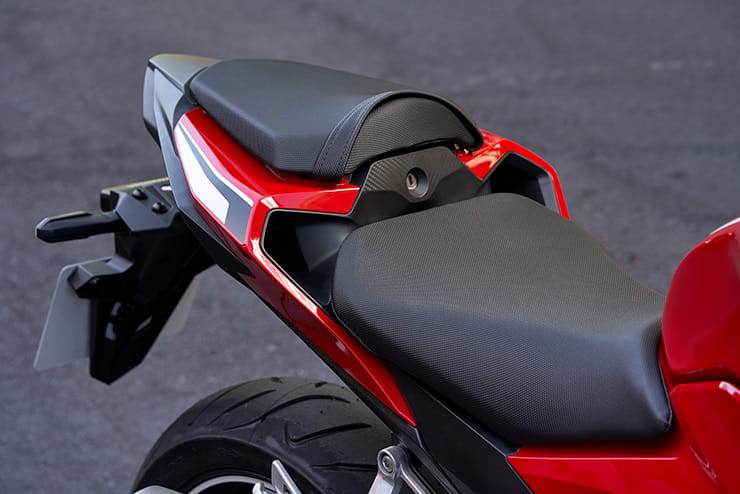 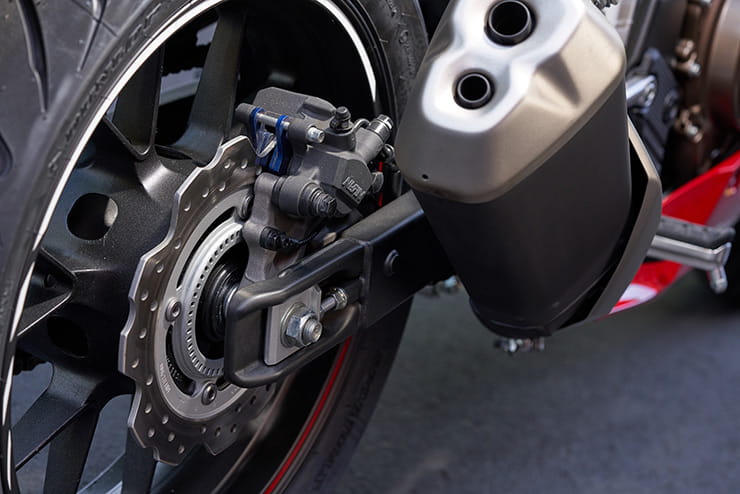 Above: Minimal room under the pillion seat

Eligible for FIM Supersport 300 championship, the Honda appears to be the least fancied of the four main racing players in the class. While Ana Carrasco wrapped up the 2018 title on a Kawasaki Ninja 400, the majority of the field also opted for green, with a smattering of Yamaha YZF-R3’s and KTM RC390’s making up the remainder. In fact, 62% of the 2019 field have opted for the Kawasaki.

However, while the previous version maybe unfancied on the track, we’ll concentrate on the road version, which when compared to its road-going rivals, comes our £800 dearer but slightly more powerful and with a larger fuel tank. 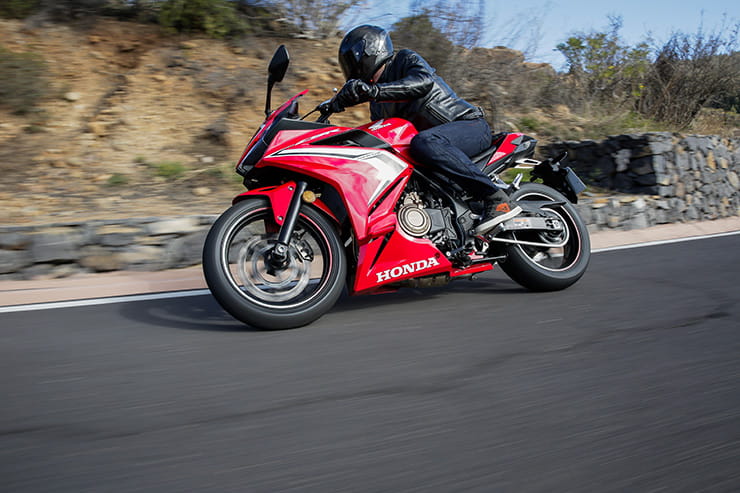 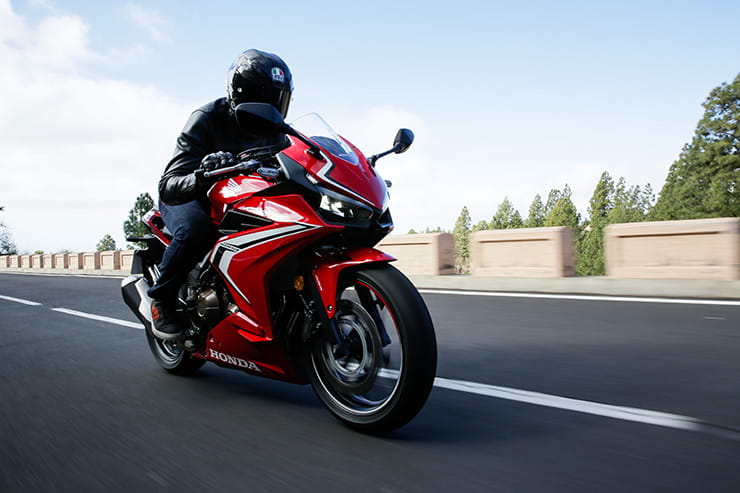 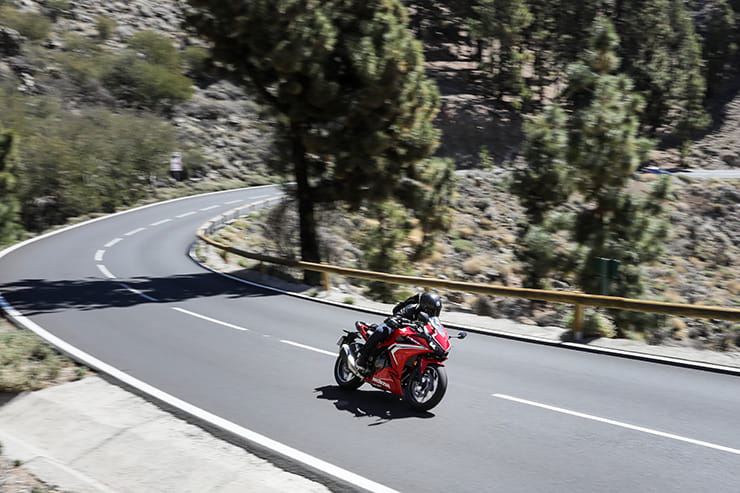 In the naked A2 class range comes the non-faired versions of the above with the Z400, MT-03 and 390 Duke fighting for class honours with the CB500F.

Alternatives could be identified as the Royal Enfield Interceptor 650 or BMW G310, also A2 compliant. 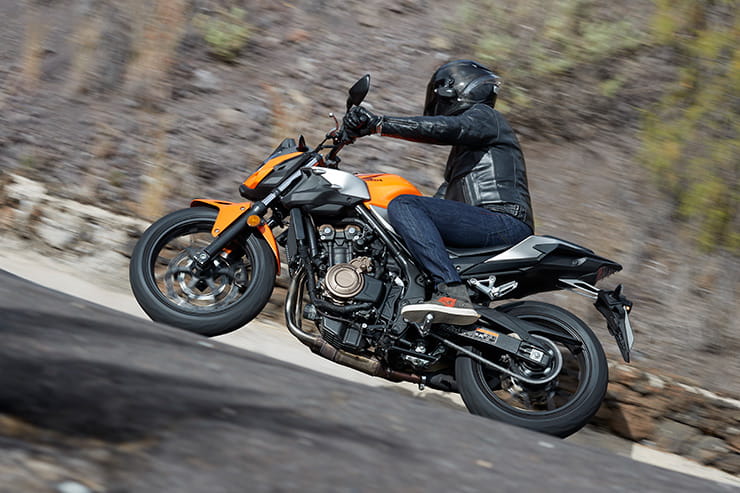 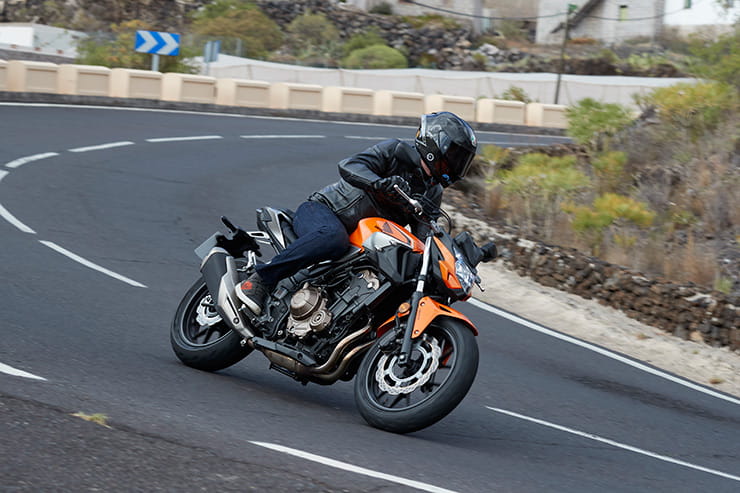 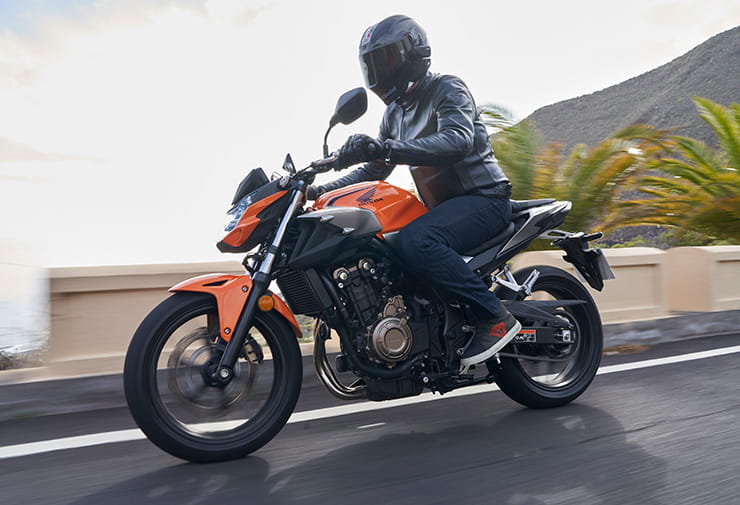 Not only is the R beautiful to look and at, you’d be forgiven to look twice to make sure it’s not a Fireblade. These two friendly Honda’s have soul, purpose and identity to run alongside the quality of the build, spritely and vibey parallel twin motor plus the easy riding position sweet handling and tidy gearbox.

The R and F give confidence to the newer rider or those upgrading from a 125 while providing an opportunity to those stepping down from a bigger bike the chance to challenge its performance potential.

The 500’s have sold in abundance over the last six years and, based on the two newbies I’ve just ridden, will continue to deserve their position within the most popular A2-licence friendly machines for many more to come. 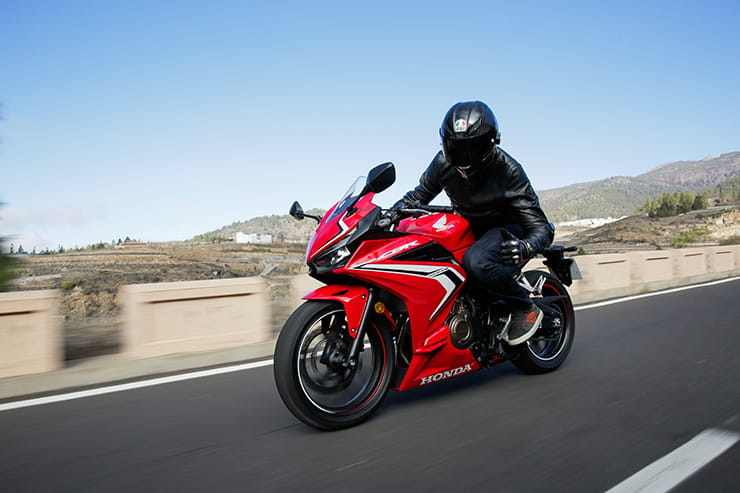 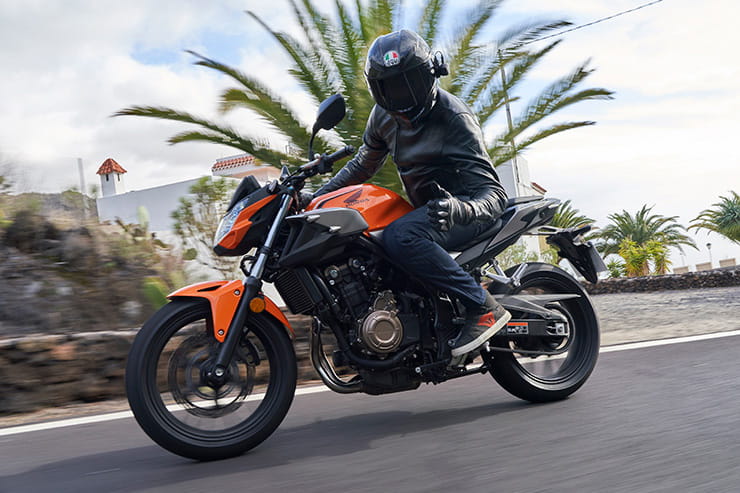