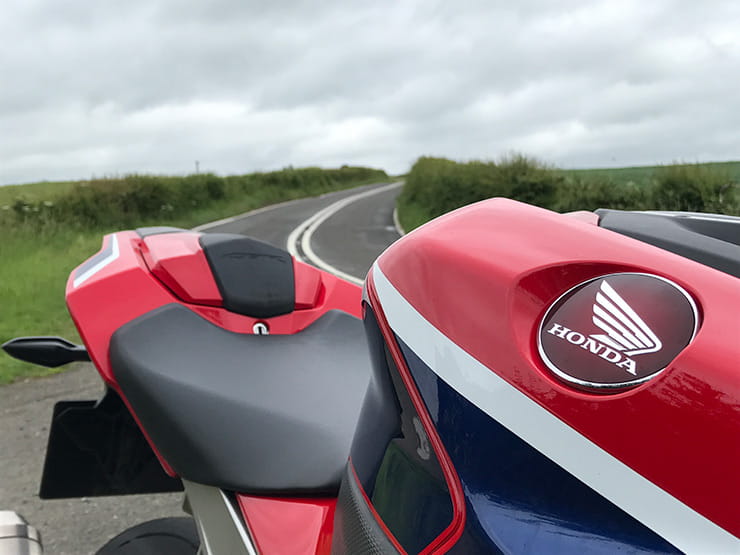 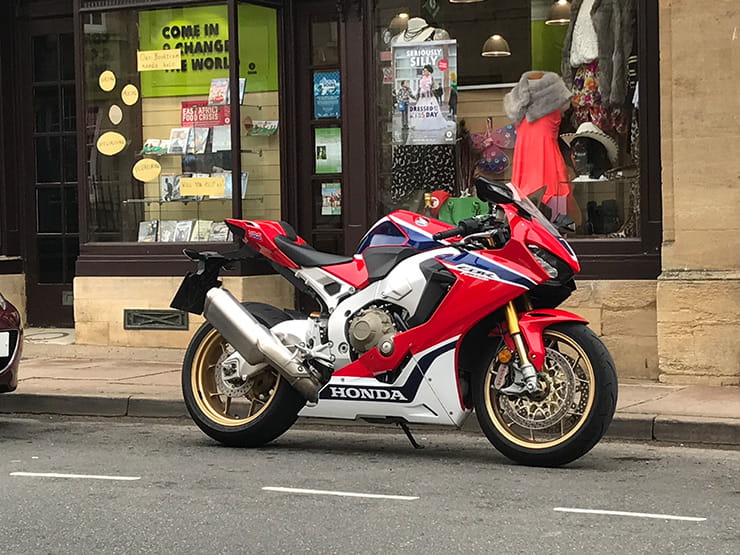 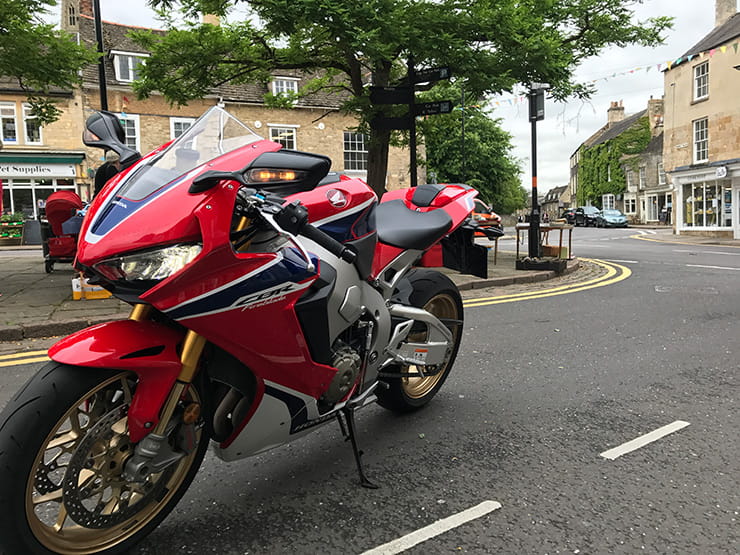 If Honda made Carlsberg, it’d be tasty, classy, understated and the can would be ergonomically perfect. Thankfully, Honda makes motorbikes, not lager and the new Fireblade SP is back to being a pint of fizz in a half-pint pot. Steve Rose is still tiddly.

Honda’s 2017 Fireblade has had an interesting start to the year. Rave reviews at the press launch followed by a mixed reception and some strong opinions in the months that followed. Plus, some high-profile difficulties in developing the race bike. Of course, Superbike race machinery and road bikes are very different things – there’s not a lot of shared parts - so challenges with a racer have little relation to what we as road riders experience.

BikeSocial sent out its most experienced, straight-talking road tester out for a long ride on the SP version to get his take on it. Here’s what he found. 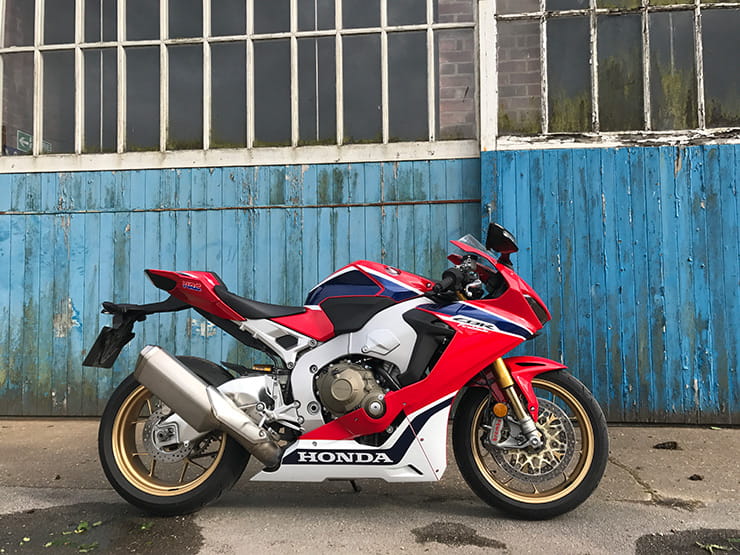 Single minded, £19,000 track-focused, limited edition sports bikes shouldn’t be this simple to live with. That kind of money usually guarantees a harsh ride from race suspension, peaky power delivery, rough low-speed running and overheating in town, chronic discomfort and all the civilised niceties of a well-developed road bike (mirrors, indicators, switchgear, light clutch action) discarded in favour of anything lying around the race shop that’ll get it through homologation. SP? Surely that means ‘Sans-Practicality’

Honda’s new SP Fireblade is not like that. Filtering through rush hour traffic, it fuels smoothly, glides in and out of gaps with the engine temperature still reading normal and a clear view in the ‘not-too-bad-for-a-sports-bike’ mirrors. Not only that, but the tiny dimensions (feels like an old RVF400) make it easier to squeeze through gaps than almost anything else out there. It takes a few goes to get the balance of throttle and clutch rich right when setting off from rest – feeling like it’s about to stall unless you give it an extra tweak of throttle – but you soon get used to it.

Into the countryside and the thing that grabs you first is the ride quality and poise. Discussing the speed would be vulgar and unnecessary – let’s just say we are doing 35mpg in a 45mpg zone. The Honda rolls into corners like it’s attached to your central nervous system, flicks more aggressively when the turns become tighter and is stable at speed, even on the pockmarked, acne-macadam my local council prefers. On Mode 2 (road settings), the electrically controlled Öhlins suspension is a demonstration of just how effective some oil, springs and a few holey discs can be in keeping your squashy round man-bits round. Not quite floating on air but there’s a big difference between feedback and ‘feelin-for-where-my-man-eggs-used-to-be’. The ride quality and road holding are just stunning as we annihilate some of Cambridgeshire’s nastiest, bumpiest B-roads.

Oh… Did I mention it was raining?

I mention this because much of the mumbling about the 2017 Fireblade has been about the inconsistent fuelling. Not this one, it’s just perfect.

Sorry chaps, I’m putting health, hormones and licence on the line here and I can’t make this bike be anything other than brilliant. 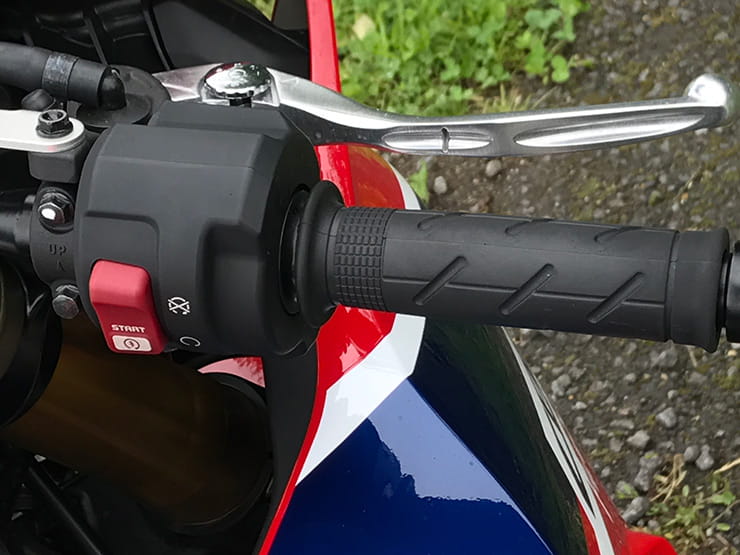 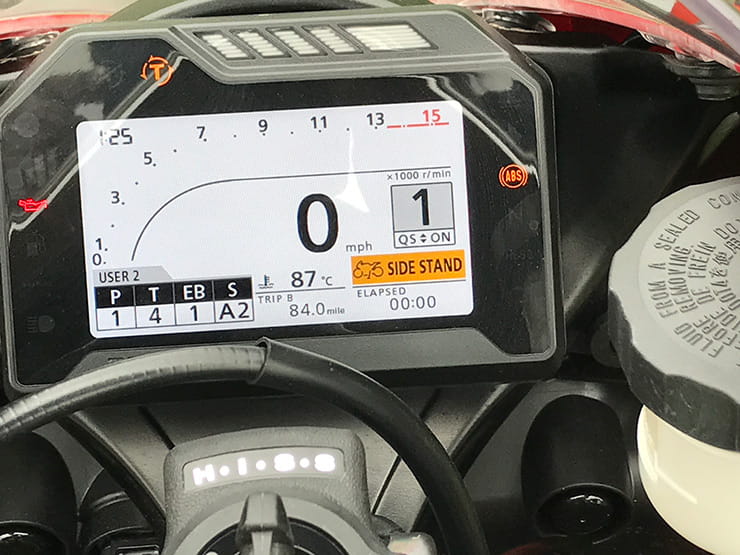 Normally I don’t care how much faster a 1000cc motorbike goes than everything else because, aside from the initial acceleration and some extra overtaking grunt, it’s my riding, my bravery, my perspective on how quickly I want double-vision, watering eyes and that mental moment when you just can’t process any more info in this timescale, that determines how fast I go.

But part of the reason I’m riding the Blade today is to really get to the bottom of the fuelling thing, so, in the interests of science, I find a quiet stretch of straight road and repeatedly accelerate as hard as I can in second and third gears, trying to swap closed for full throttle as quickly as possible.

It’s interesting, but inconclusive. Firstly, I’m blown away by the force of the acceleration. Can’t remember the last time I did this on the road and hung onto full throttle – it’s terrifying. Secondly, there’s something going on here. The Blade feels like it’s stuttering and stammering at the back wheel. Is this the fuelling lurching and hunting, or the back-wheel bumping and damping? I find a smoother, less back-road-ey stretch of tarmac – you might know it as the A1 - and try the same thing. The stuttering goes away, suggesting it’s a suspension thing, not fuelling. Sorry chaps, I’m putting health, hormones and licence on the line here and I can’t make this bike be anything other than brilliant. 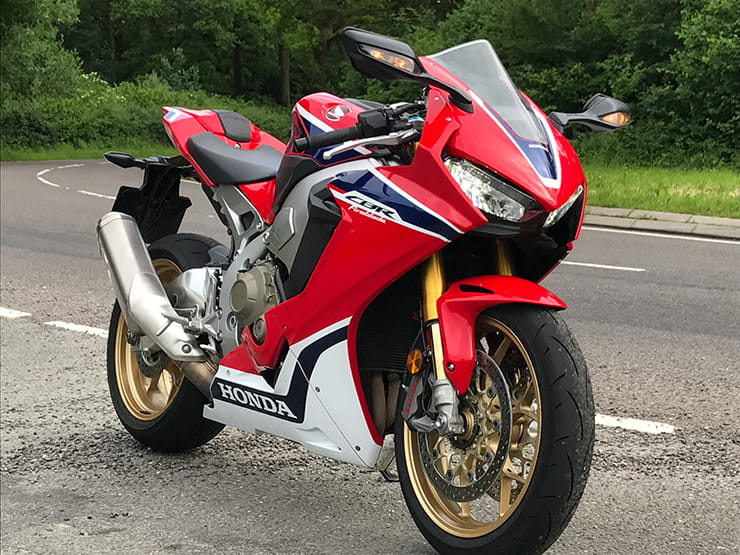 The Fireblade is blowing my mind making riding this fast feel this confident. The quickshifter’s auto-blipper makes downshifts smooth enough to keep things settled going into damp corners. The riding position allows easy weighting of the outside footrest while leant over for some extra confidence and the linear power delivery lets me wind on the oomph while lifting the bike upright and then nailing it. Up till now, I’ve never been a fan of electronic control, but this ride is changing my mind.

Apart from the water running down my back and, er, crack (my fault for wearing non-zip-together leathers in the rain) I’m not uncomfortable. I have no idea what setting the engine electronics are on – the same ones as I picked it up with – but I trust the throttle, trust the suspension and trust the ABS enough to be braking as hard in the wet as I would be doing in the dry without even considering the consequences. The only niggle is a tendency for the bike to lurch slightly on a ‘just-open’ throttle as if the ride-by-wire system can’t decide whether the throttle is open or closed. 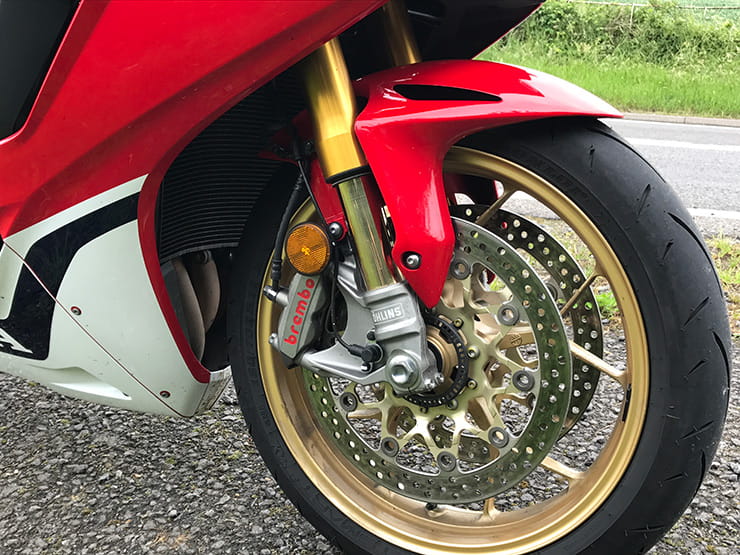 The Honda has everything a state-of-the-art superbike needs. It’s lighter than the opposition, packed with electronics, manages to be both tiny and roomy in that way that only Hondas ever are and, it goes like bejeezus when you open the throttle. The quicker you twist more bees jees and zees you get – obvious, but it never stops being entertaining. More importantly, it feels like a Fireblade should. The best Blades of the last 25 years were faster than their figures suggested, light enough to surprise you and noticeably smaller than the competition. They also had that certain ‘special’ something that left you thinking ‘never mind if-Carlsberg-made-sportsbikes…What about if-Honda-made-lager?’ I’m rambling now, time to stop for some nuts.

I started this ride glibly talking about how the Blade really isn’t any quicker from here to there. I was wrong. Later today my 53-mile commute home will take a full five minutes less to complete than any other bike I’ve ridden. That’s a saving of 50 minutes a week both ways or almost two extra days a year to hug my wife if I buy a Fireblade.

£19k is a whole lot of money for a motorbike, but somehow, this one feels worth it.

Yamaha’s stunning new R6 meets Honda’s 2017 Fireblade SP. One costs almost twice as much as the other, so it must be twice as good…right?

Comparing the Blade SP to the R6 is like putting a Porsche next to a Subaru. On the road, they go as fast as each other, but one of them is smooth, sophisticated and almost smugly over-competent where the other is noisy, aggressive and a much more involving experience. 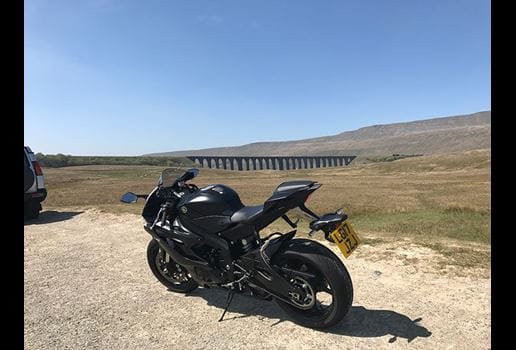 The R6 does the same as the Honda, it just needs a few more revs to start with and somehow (bear with me here) the power feels lighter, flightier and sharper where the Honda’s feels denser, weightier and somehow more serious... more, er, brown? Does that make sense to anyone but me? It’s difficult to explain just how good both of these bikes are in lousy weather as well as summer sunshine. The Yamaha feels a little more remote on its single-minded suspension, but it still steers confidently and puts down a lot of power to go very quickly, with no drama. I do occasionally swap the riding mode back to ‘std’ on the Yamaha, but never need the softer ‘B’ mode.

The R6 is the ‘how much £££?’ posh-boy of the 2017 middleweight class but still the underdog in the fast group and there are plenty of keyboard warriors out there who will tell you that it’s revvy, gutless and too slow. They’re wrong and the money saved over buying the Blade buys an awful lot of tyres, fuel, evenings in a Scottish/French/Spanish B&B and track days. If performance-per-pound is the consideration here the Yamaha wins hands down.

But let’s not forget, these days there are more than enough middle-youth riders out there for whom £19k is affordable compared to the price of a classic car, fancy kitchen, caravan, boat or motorhome and, if you’re ‘buying’ on PCP a Fireblade SP is £4399 down and £169 per month for three years. £169 a month is £42 a week and I know plenty of people who spend more than that on coffee and cigarettes.

The final word (and I apologise for this in advance) goes to an old mate who’d been there, done the whole superbike thing and bought a Honda VFR400 NC30 a few years back. His take on it was this. ‘The best thing about having an enormous penis is that I can buy the bike I actually want and not the one I think I need to be credible.’ I can’t vouch for the first bit, but he rarely got left behind on that little NC30. Motorcycle performance became far too much for the road and most UK racetracks a long time ago. What you ride these days has very little impact on how fast you go. What matters is how involved you want to be and how easily you want to go fast.

My take on this after 35 summers on mostly sports bikes is that it changes all the time. When I ride a 600 for a year, I love it, but next year I might fancy something bigger with a different challenge. The year after that, it could be something different again. Which is probably why I’ve owned so many flipping bikes.

And that’s part of the attraction. Before last week I thought I was done with sports bikes for good. Right now, I’m flicking through the small ads looking at second-hand NC30s and R6s. Not that I’m bragging, of course. 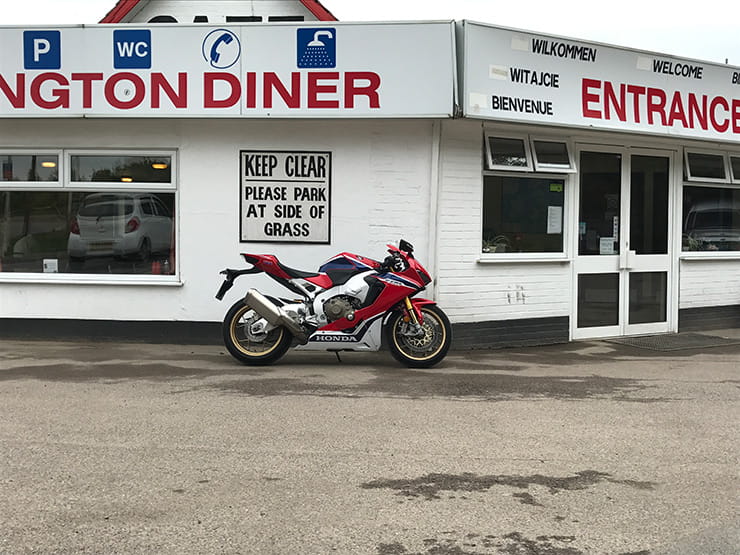