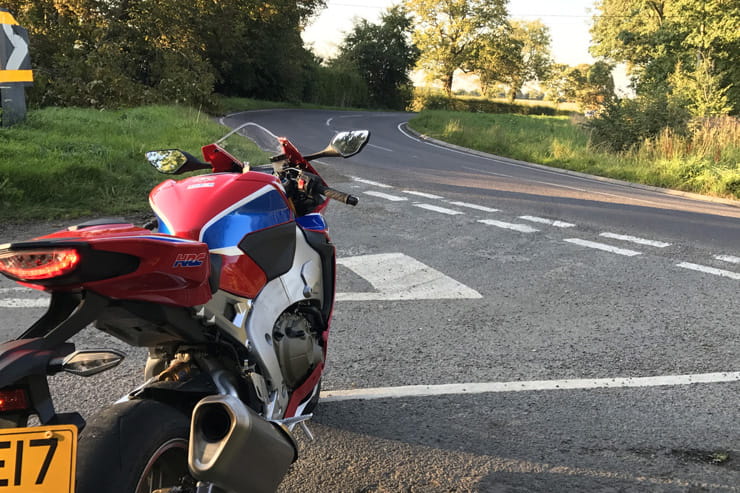 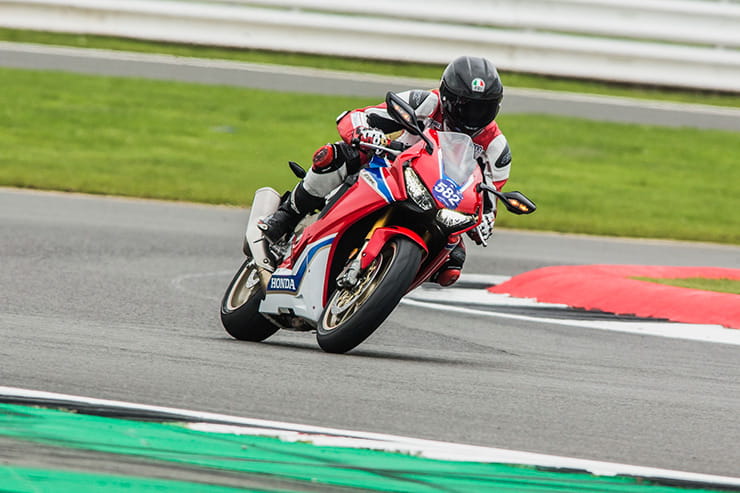 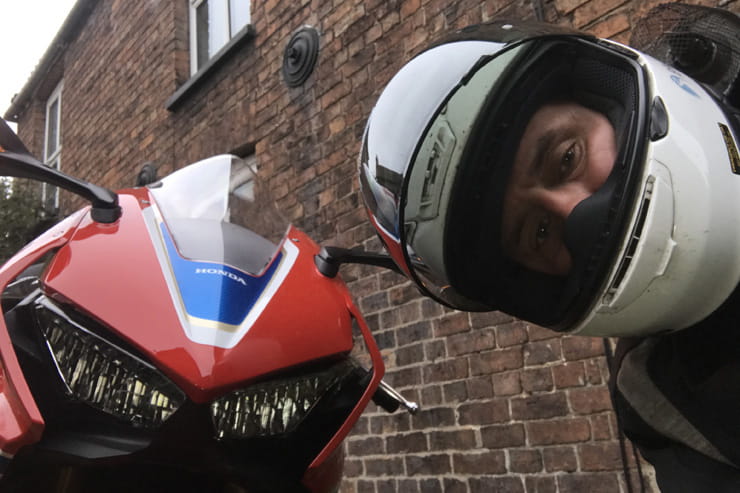 I am a very lucky man. Less than a mile from my house are two of the most challenging biking roads I know. One of them is part of my ride to work every day. And today I’ve got the hottest version of Honda’s 2017 Fireblade, the £22k SP2 to entertain me – we’re already on our fourth lap. I’m guessing a lardy bloke in baggy textiles and a rucksack full of nuts wasn’t the riding vision HRC’s engineers had in mind when they built this racing homologation special and this is very much a knee-out, not knee down ride, but it’s also getting quick enough to feel the electronics doing their stuff and to discover that the top-end-friendly engine changes let the SP2 hang onto a gear for half a second or so longer than the ordinary SP. Honda describes the three main modes as ‘Fast’, ‘fun’ and ‘safe’. I’m more inclined to call them ‘TT’, ‘fast-B’ and ‘take me home, my brain hurts’.

The science behind this ride is me trying to understand how much faster a bike turns when you put lighter wheels on it. And the answer is that it’s more complicated than that because when the lighter wheels make the bike turn faster it then asks different questions of the suspension and the traction control, which all needs setting-up to suit. I’m not the right person to answer this question at 7.18am on a Tuesday and a B-road shared with sleepy morning commuters isn’t the right location. The SP2 is a track bike and I’m not a track rider. 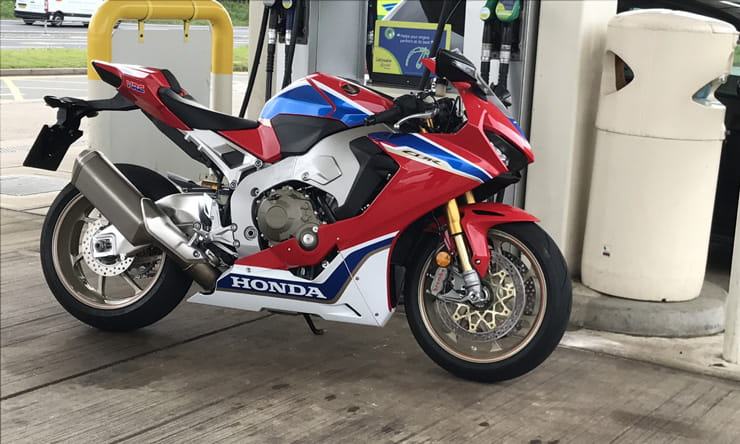 My riding talent is to somehow get myself to work five minutes sooner than physics suggests, but so far there isn’t a race series for that. I’ve also been lucky enough to ride pretty much every sports bike of the last fifty years and, in my opinion the current Fireblade SP is the best all-round road package of any of them. Small, light, unfeasibly easy to ride with simple-to-use electronic aids and semi-active Ohlins suspension that does ride quality and high-speed handling control at the same time. In theory, turning something this good into a TT winner should be simple, but as we all saw so dramatically last summer, theory and practice can be very different things.

This bike, the ultra-limited, race homologated SP2 is the SP turned up to 11 (ok, 10 and a half). The biggest difference for a road rider are those lightweight forged Marchesini wheels that help the bike steer quicker and the suspension control damping better (because less weight on the end of the springs is easier to control).

The rest of the extra £3000 is spent on new pistons and a more frisky cylinder head to give increased reliability in race trim and therefore allow a little more tuning than the standard components. Power is the same as the SP, as are the electronics, suspension and brakes.

What is interesting though are the subtle differences between this very-new, 400-mile bike and BikeSocial’s long term test SP, which now has 3000 miles under its wheels. The SP2 feels slightly clumsy in comparison. Gearchanges are nowhere near as slick as our long termer, the brakes don’t feel quite as sharp and the ride quality on bumpy b-roads is definitely not quite settled-in yet. Plus the engine’s pick-up on half throttle isn’t quite as crisp as our bike either. 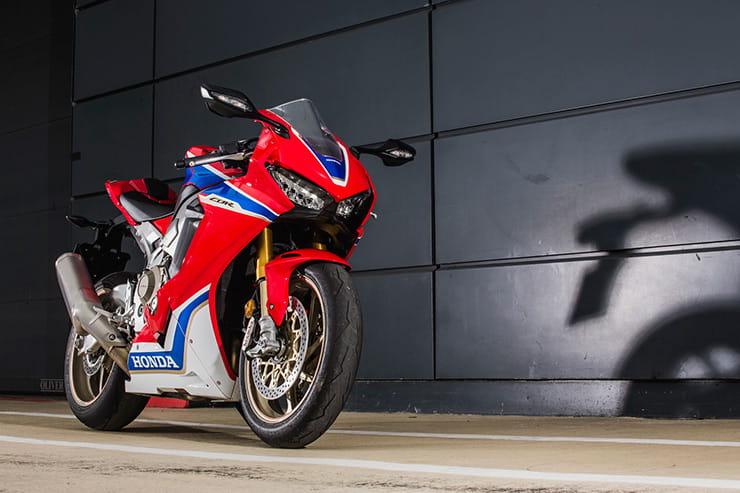 It’s easy to forget that new bikes take time to bed in and the faster and sharper and more sophisticated our sports bikes get, the more these things become apparent. By the end of our test, with 240 additional miles on the clock, things are improving, but the SP2 still feels like a stiffer, tauter race bike where our SP is just sublimely easy and effortless to ride.

With just 39 of the 500 SP2s produced worldwide coming into the UK, don’t expect to see too many around. Whether it becomes an investment like the RC30/RC45 depends on how Honda responds to what happened in 2017’s racing calendar. If they do, as Honda often does and put everything over the winter into turning the Blade into a firebreathing race winner (especially at the TT), the reputation will be saved and we’ll all be waiting for the right moment to buy an SP or SP2 (history suggests around ten years after it came out as being the low point in price). Let’s not forget that the RC45 took four seasons to win WSB and was regularly overlooked as a road bike, but as an investment, they are worth three times the price of the Ducati 916s that regularly made them look daft on a track.

BikeSocial’s advice would be to forget the collector stuff and get yourself a test ride on the 2017 SP model. Don’t listen to the bedroom experts, make up your own mind Rumour has it there are some flipping good deals on remaining 2017 SPs right now. The SP2 is good, but unless your name is Padgett, the SP is probably better. 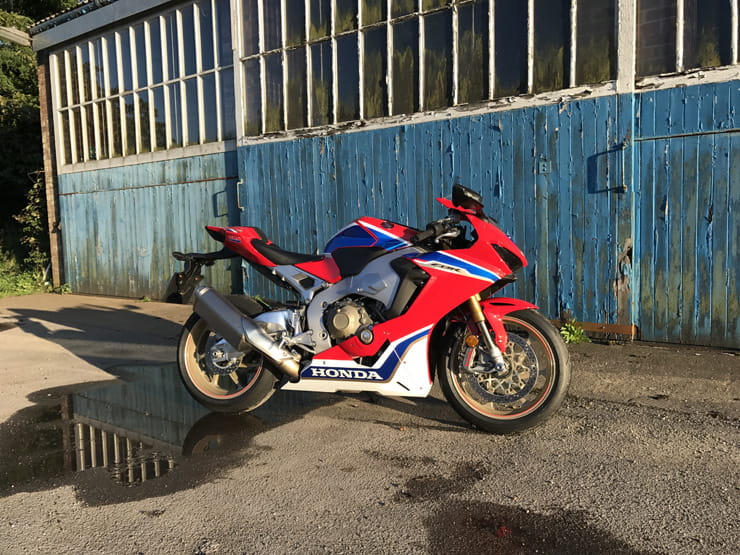 BikeSocial’s Web Editor Mr Michael Mann took the SP2 to Silverstone for a morning on track. He came back smiling.

This is the one that every Fireblade collector across the land should, would and could have been fighting for. Only 500 have been produced world-wide and 39 of those have made it to UK shores.

Unfortunately, this racing version of the 2017 Blade has become the victim of a million smart-assed wisecracks. You’ve heard them all by now – the combined wisdom of know-it-all keyboard warriors, almost none of whom have ridden it. Weird. Imagine not going to a Michelin Star Restaurant and still managing to complain about the meal. 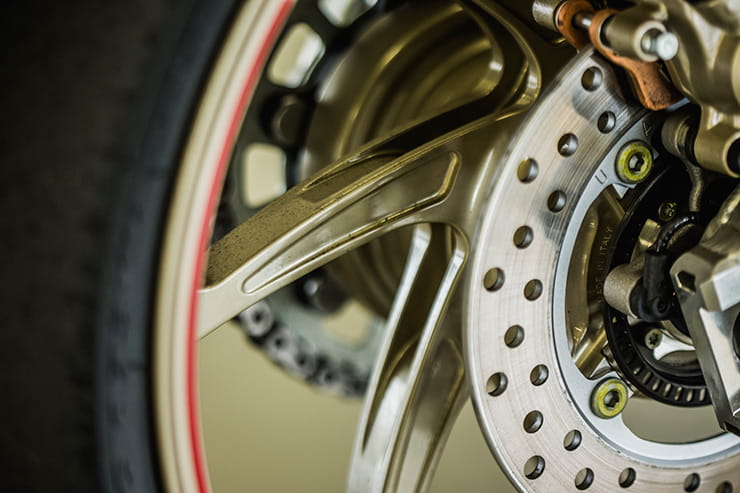 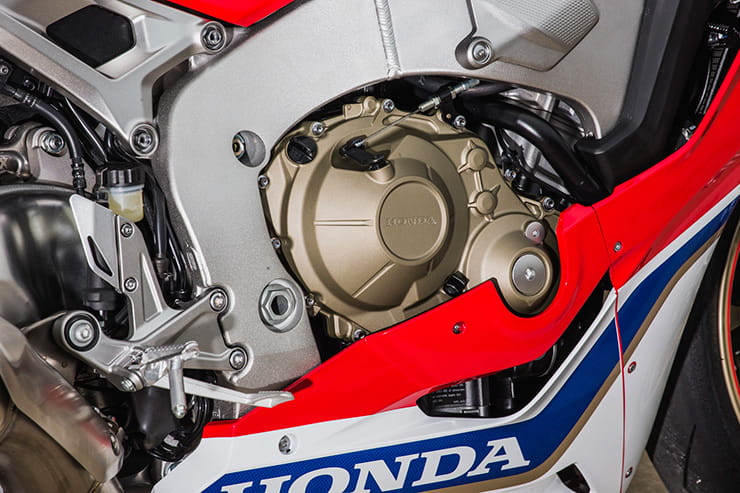 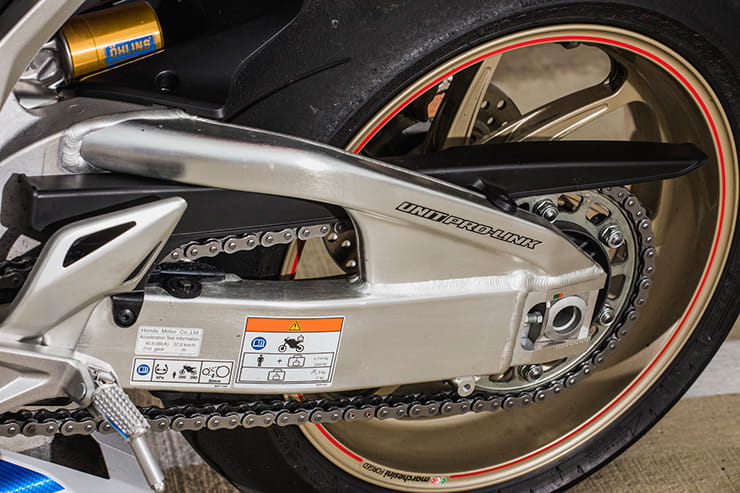 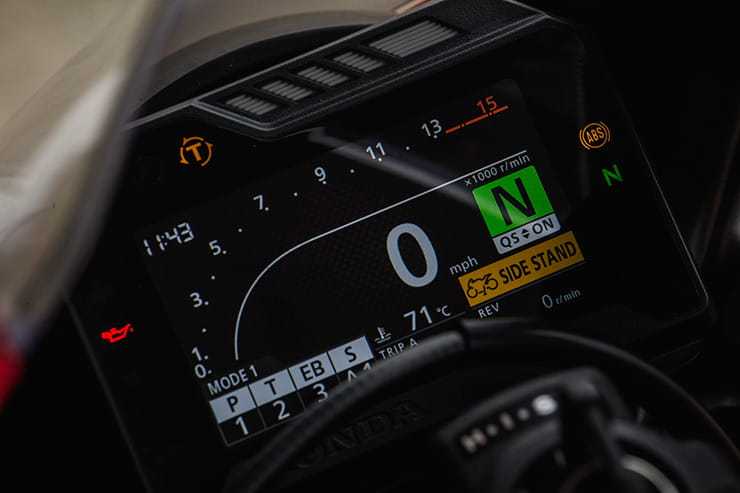 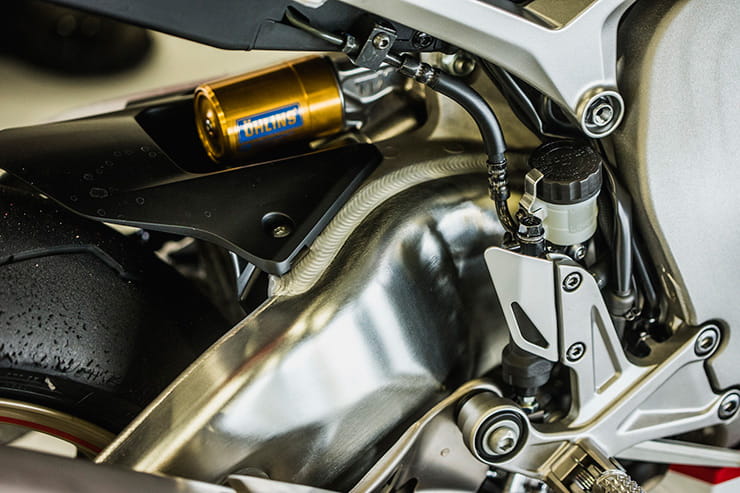 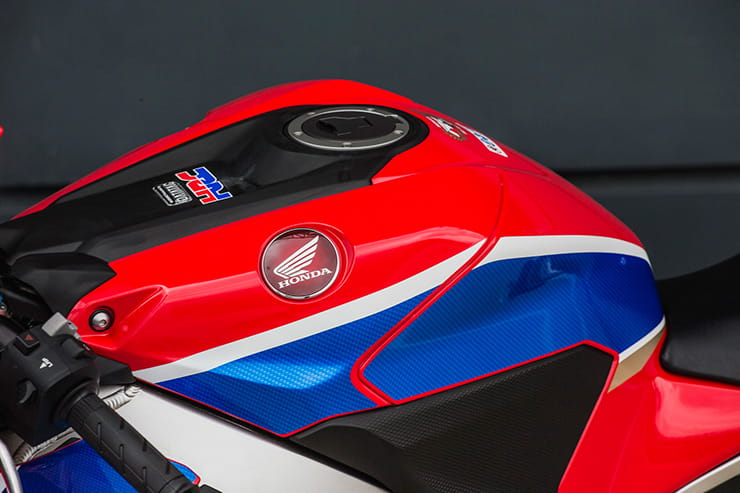 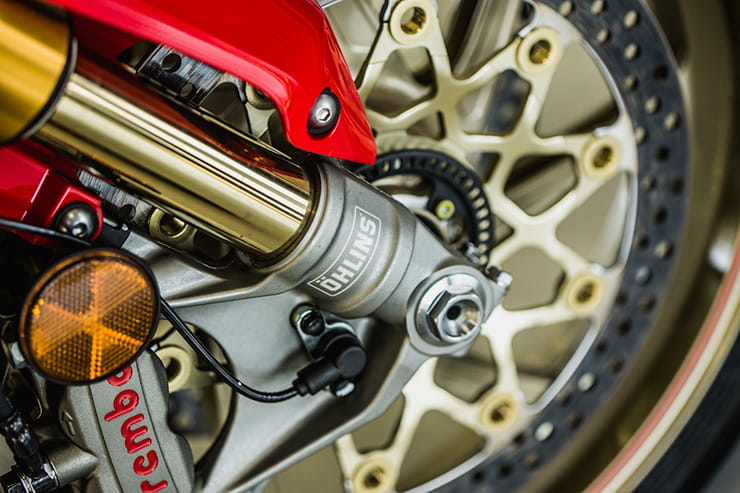 I’ve been fortunate enough to have ridden two versions of the SP on track. All that road-going friendliness, transfers to the track. As light as chocolate mousse, nimble as a frisky wasp and packed with enough stomp to make horizons charge forwards pretty flipping quickly.

Today, at Silverstone, there’s an SP2 beneath me. Familiar feel, user-friendly dashboard but slightly less weight, forged Marchesini wheels plus carbon pattern inserts and extra gold striping. The front and rear wheels reduce inertia by 18% and 9% respectively which genuinely can be felt when getting the bike down into a fast turn such as Abbey – the first corner on the F1 Grand Prix circuit and taken in third at about 95mph on the SP2. 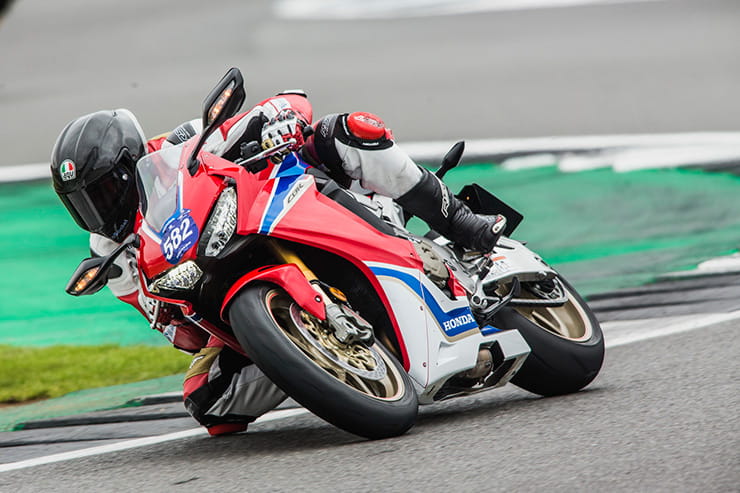 Intake valves have a 1mm larger diameter while exhaust valves are 2.5mm larger in diameter than the SP. Cooling tricks and spark plug length comes straight from the RC213V MotoGP bike while the pistons come with their own ‘crown design’. The SP2 is a whole 1kg lighter than the 189kg wet weight of the SP.

The Fireblade SP2’s electronic control devices are the same as those of the SP, with exclusive SP2 settings including five-stage power modes (three on the SP), a programmable 6,000rpm to 12,000rpm launch control, and a pit-lane speed limiter. 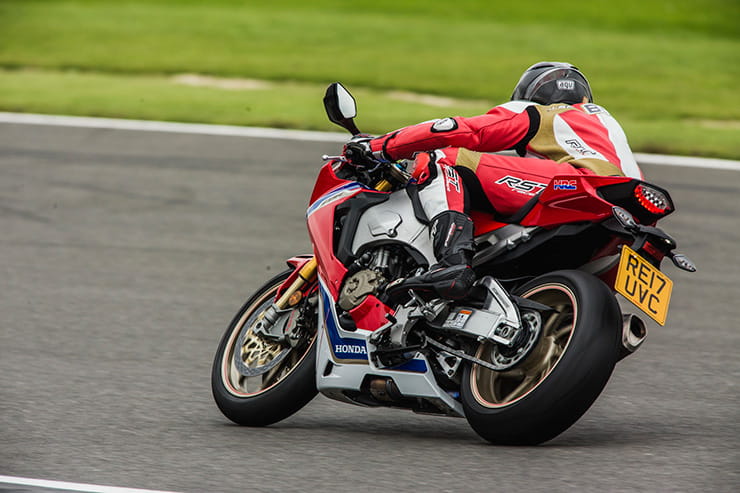 The alterations are barely noticeable yet it feels as though I can hang on the revs longer. The four-cylinder superweapon is a joy to ride, very forgiving and it makes me feel far more talented than I am. The chassis is supple, but sharp and direct too; so easy to throw from side-to-side. An abundance of power so smoothly delivered while the brakes are perfect for 99% of riders. The out-and-out racer may feel like a little more pre-ABS bite is required but by mentioning it is just a waste of word count. 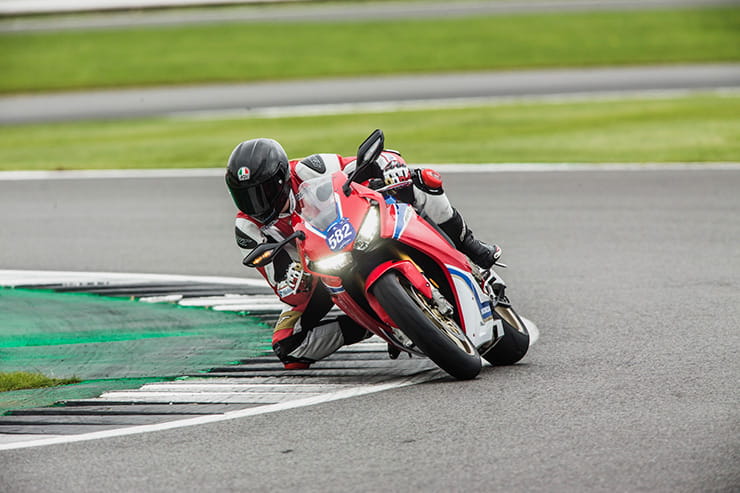 It’s £22,225 (25 relates to the number of years the Fireblade has been around) price tag has not scared many since Honda confirmed to BikeSocial two months ago that “most if not all are accounted for”. Hopefully, even with that kind of exclusivity many will be thrown around Silverstone’s 1.8 mile International Circuit. 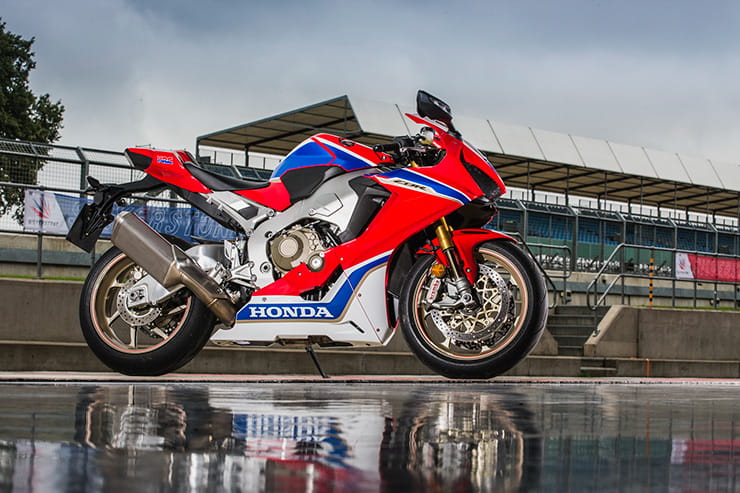 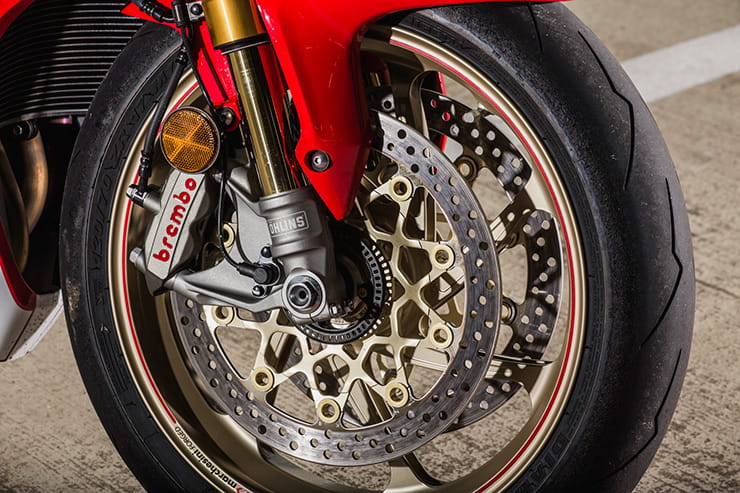 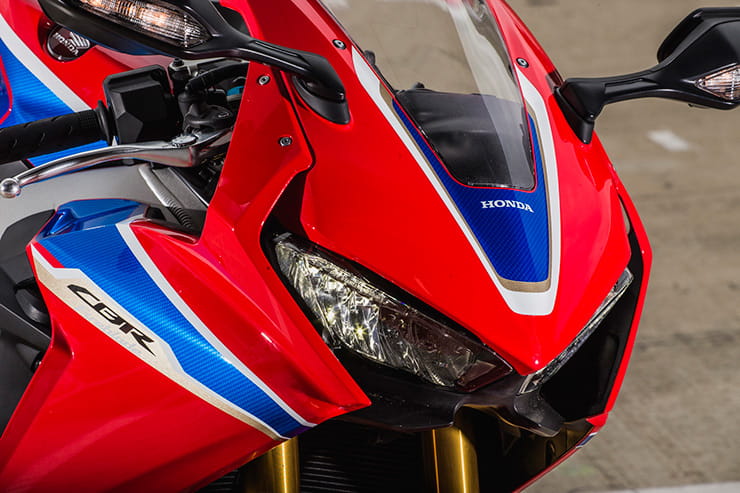 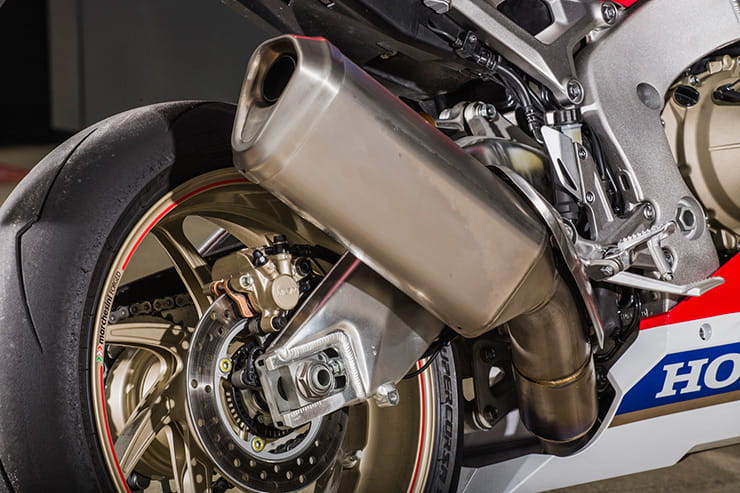 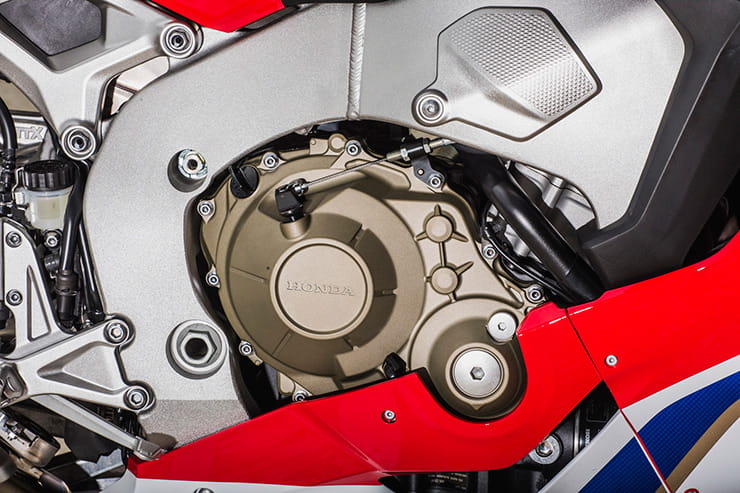 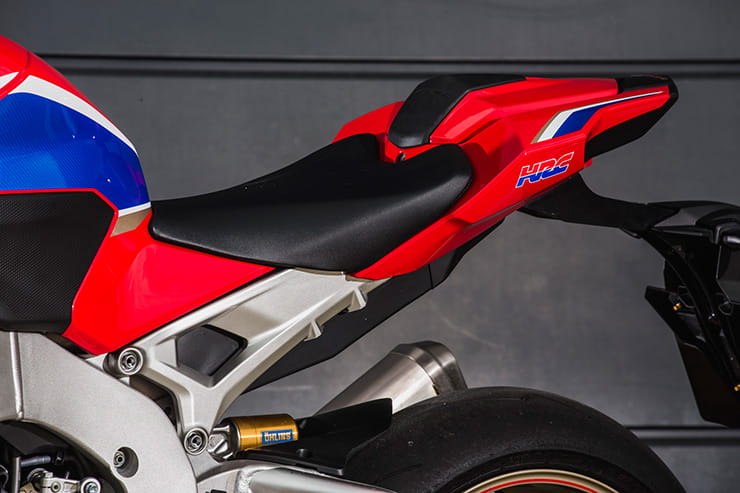 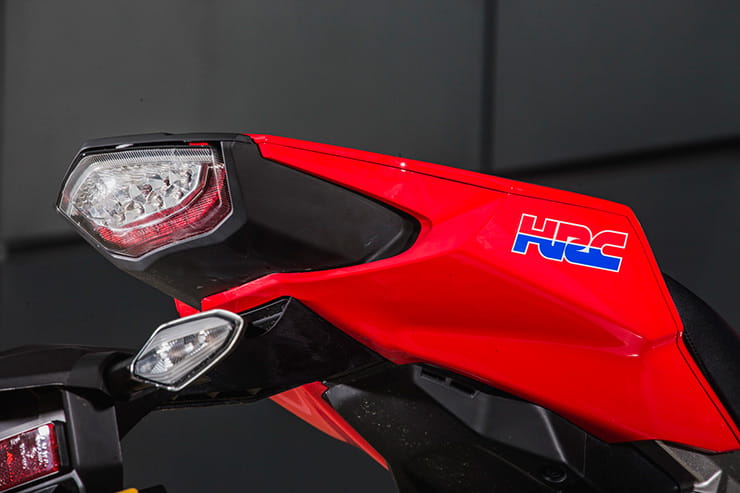