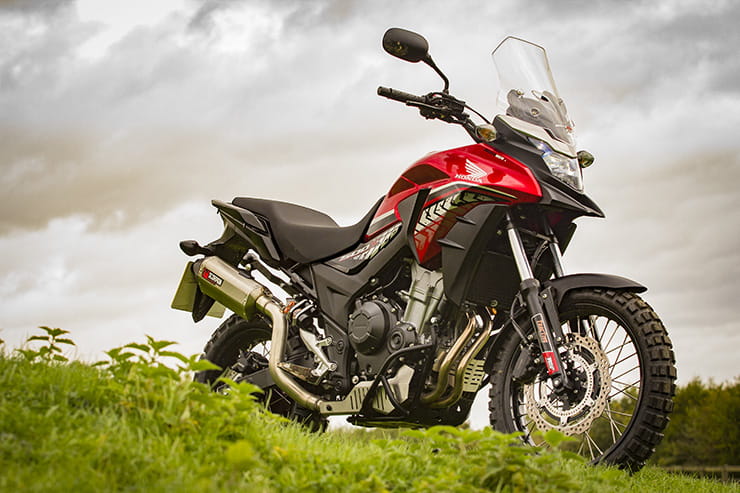 Like most things, adventure bikes have been getting bigger, which is fine, as long as there's something to fill the gap in the middle.

For a long while there’s been little to fill that increasing chasm; bikes such as Yamaha's XT660Z Ténéré have been discontinued, so too the likes of the Honda Transalp, Kawasaki KLE500 and Suzuki DRZ400. The Suzuki DR650 and Kawasaki KLR650 – stalwarts of the adventure scene in overseas markets – never even made it here, mainly due to European emission regulations.

This is the gap that Northamptonshire based engineering company Rally Raid has hoped to plug with its enhancement kit for the Honda CB500X, a bike the company identified as the perfect platform for a serious mid to long-distance travel bike.

“We chose the bike mainly because of its capacity, the size of the market and the price,” explains Rally Raid's John Mitchinson. “We knew that for motorcycle travel, especially solo, a motorcycle needs to be light, agile and smooth, which is everything the CB500X is to begin with. It just needed a few little tweaks to make it the machine we felt it always should have been.” 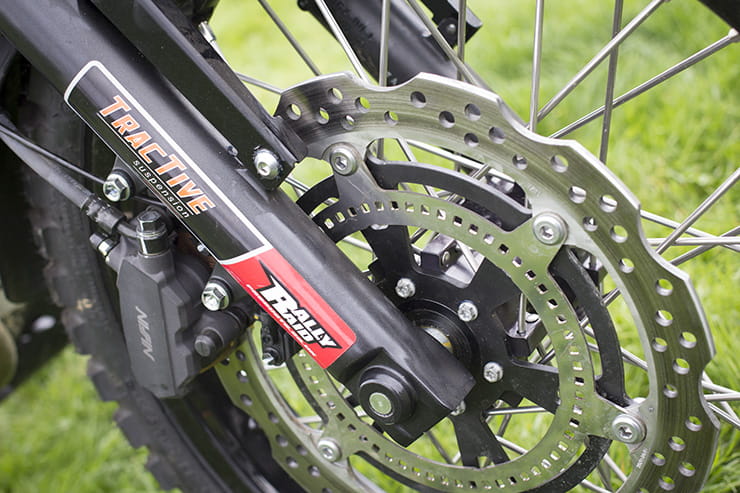 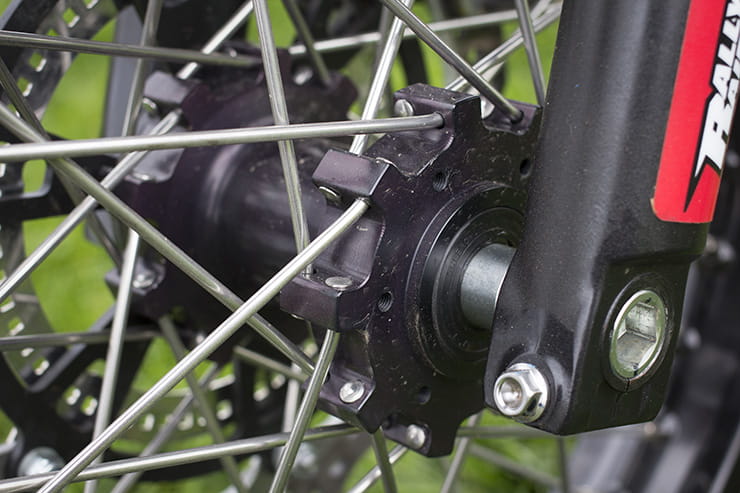 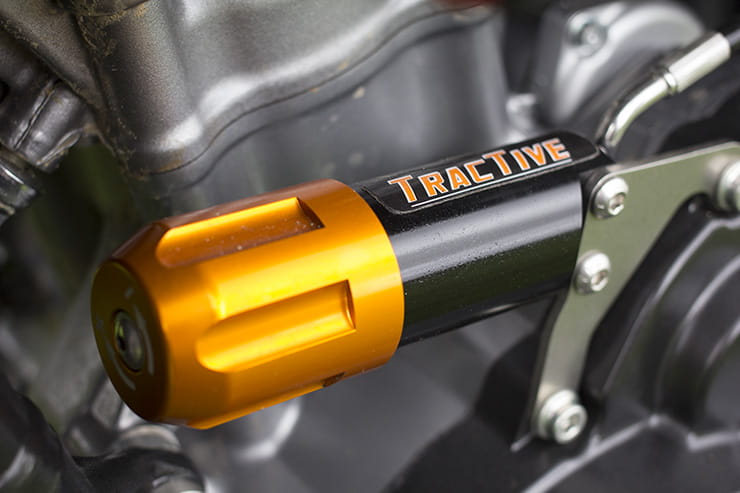 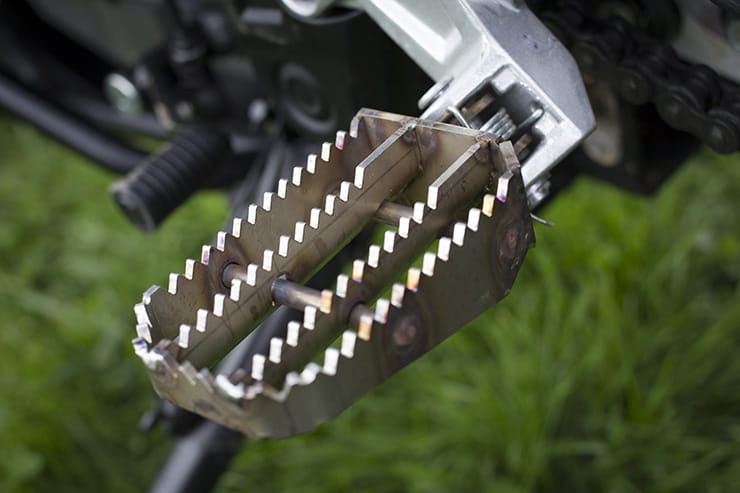 The changes begin with the suspension, with travel increased by 30mm at the front and 50mm at the rear thanks to a new Tractive rear shock, custom billet aluminium linkage and uprated cartridges for the front suspension with choice of three spring rates and adjustable preload caps. More rugged spoked wheels – tubeless with stainless steel spokes – replace OEM cast wheels, with an increase from 17-inch to dirt-friendly 19-inch at the front. At the rear the original cush drives are retained and the bike's standard ABS isn't effected. Importantly, the kit involves no cutting or welding, can be fitted to new or second-hand bikes, and can be removed in order to revert the machine back to stock. 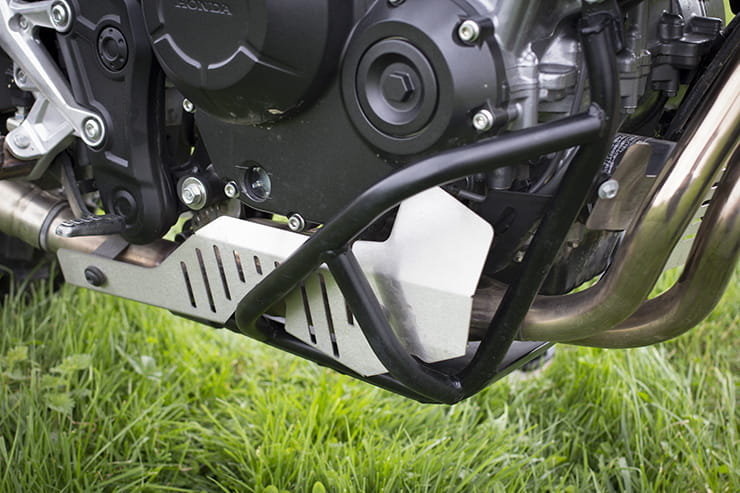 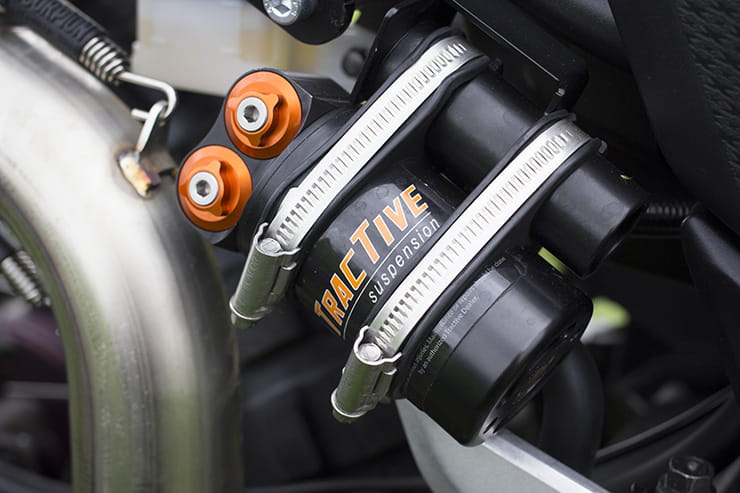 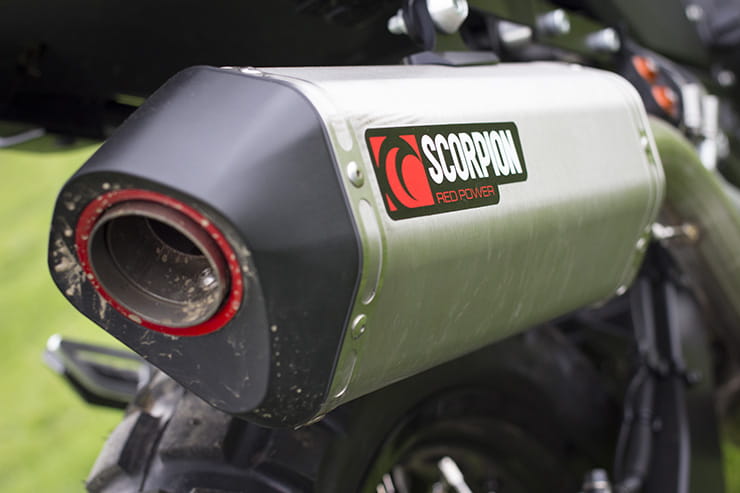 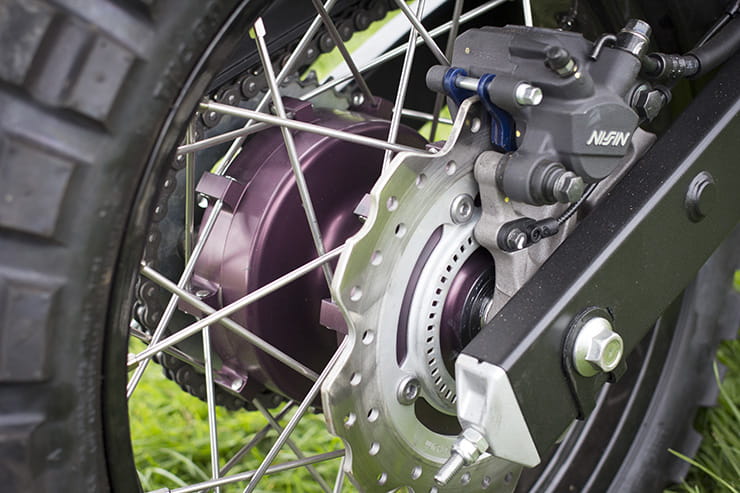 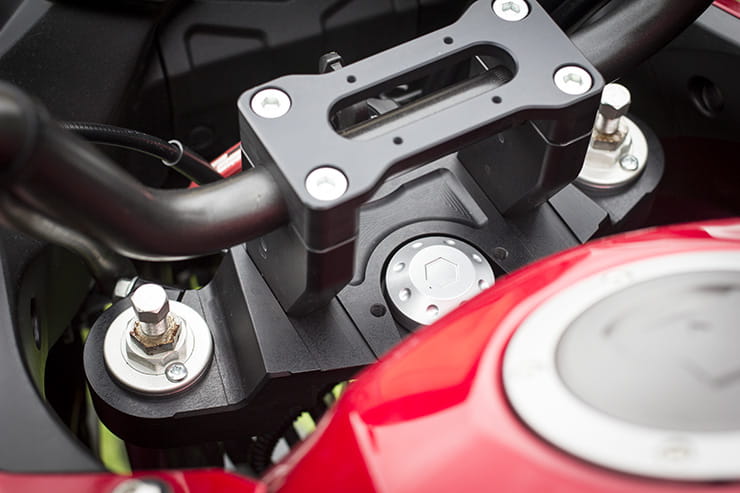 As well as suspension and wheels, the upgrade kit also comes with a billet aluminium triple-clamp (allowing for thicker gauge Renthal bars) with Scotts steering damper mount, as well as an extended side stand to cope with the ground clearance, which has increased by two-inches (along with the seat height). The cost of these upgrades is £2220.70.

“We tried a 21-inch front wheel but it was too big,” explains John. “Physically we couldn't prevent it fouling the radiator and it looked out of proportion to the rest of the bike. The rear could have been 18-inch, but the only reason we stuck with 17 is because the speedo is gearbox driven, meaning we'd have had to do some calibration work on the speedo to get it to read accurately with an 18-inch rear.”

As well as this Level Three Adventure kit there are also other – cheaper and less dramatic – options available. The £696 Level One kit retains the bike's original wheels and ride height, simply improving the suspension with uprated Tractive rear shock and new cartridges and damper rods for the front-end. A £1450 Level Two kit goes as far as giving the bike the longer travel suspension of the Level Three, but without the increase in wheel size. For this, you can either retain the bike's original cast wheels, or have a set of 17-inch spoked and tubeless rims from the Rally Raid catalogue. Spoked tubeless wheels in the original 17-inch dimensions cost an extra £770.70.

On top of the three kits you can also purchase Rally Raid's own engine guard and integral sump plate (£238), soft luggage racks (£198), tail pack rack (£105.60) and heavy duty foot-pegs (£86.40), all engineered in the Northamptonshire factory. For a nominal fee (yet to be confirmed) you can also add a handlebar switch to deactivate the bike's ABS, which is sometimes necessary when riding off-road. Rally Raid has also worked with British exhaust manufacturer Scorpion in offering a choice of either high or low level silencers at a cost of £396.00, and even does its own sticker kit for the bike. 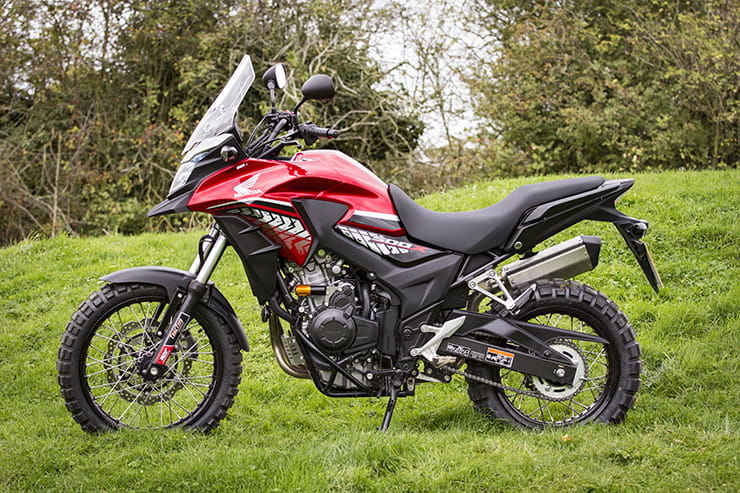 The bike ridden on this test was fitted with the Level Three kit, so had taller suspension and a bigger front wheel, as well as most of the goodies from the accessory catalogue. It wasn't the first time I'd ridden the machine, so I was keen to see if my memories of it were still as positive. I liked it because it took a very solid platform, which has proven itself robust and capable in the real world, and through good engineering, made it better.

The first thing to note is the saddle height. It is taller than a stock bike – a precise two inches – but at 5'10” I could still get a comfortable footing with both feet, and it certainly didn't make the bike ungainly. At a wet weight of 195 kilos the bike isn't the lightest, but it never feels that kind of mass, even in raising the centre of gravity slightly with the taller suspension. The Rally Raid Honda feels short in wheelbase and manageable to manoeuvre, especially in comparison to the Africa Twin I'd just stepped off.

On the road the biggest change is the ride quality. The Tractive suspension, whether you have the taller spring of the Level Three kit or just the improved performance and standard ride height of the Level One, makes a noticeable difference to the way the bike handles a typical British road surface. It's more composed, controlled and comfortable.

Into corners there is a touch more dive under braking on this Level Three kit, but the improvement in damping performance means that mid-corner bumps don't kick the bike out of shape as it can do on a standard bike. I rode a standard CB500X around the NC500 up in Scotland a year or so ago and it was poor on the bumpy single track roads, wanting to stand up over mid-corner bumps. It's the same on many budget bikes; the first thing to suffer is the suspension, so Rally Raid’s mods make a big difference.

The 19-inch front wheel brings with it some change in steering behaviour. The bike is less affected by imperfections in the tarmac, and while turn-in isn't quite as sharp as it was before, it's still an agile, easy to corner machine. The knobbly Continental TKC80 tyres do take some getting used to if you've never ridden a tyre like this before, but you can still push on; they just don't have the plushness of a regular tyre, giving a rumbling sensation that you do get used to over time. You could of course fit a more road-biased trail tyre, such as a Continental TCK70 – you'd just sacrifice the visual impact of the bike, not to mention off-road traction, if you needed it. 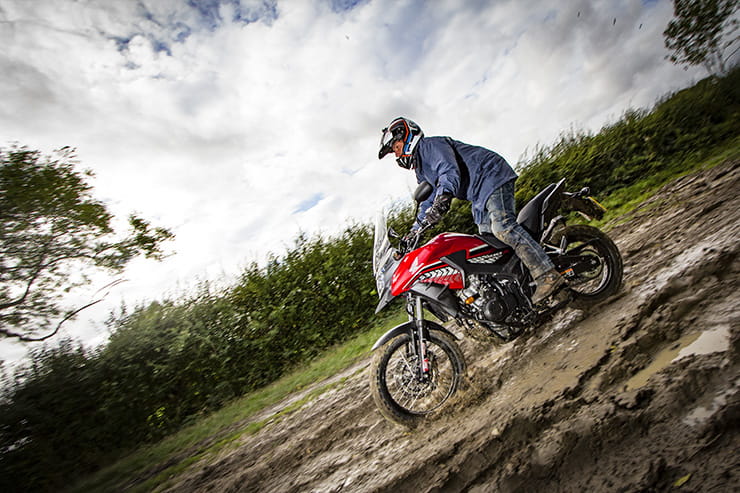 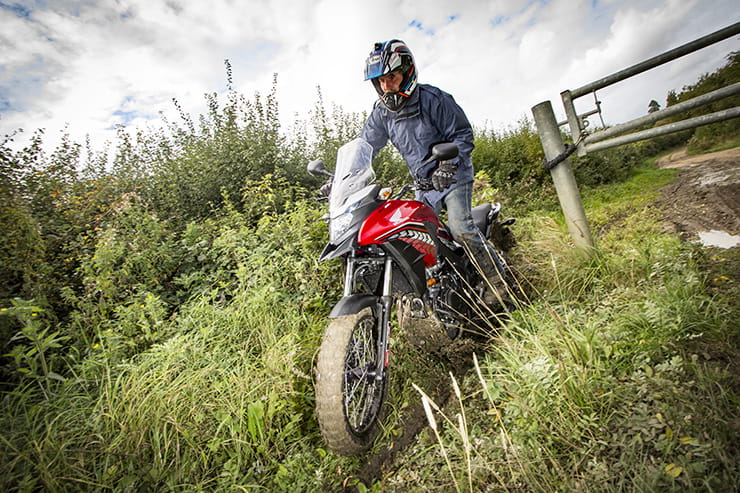 Taking the bike along dirt trails is where the Rally Raid kit starts to make most sense; the bike is simply more suited to tackling rutted, bumpy trails and the kind of conditions you might encounter on adventures to far-off places. The large surface of the foot-pegs give a much firmer and grippier pad than the standard pegs, while the billet triple-clamp allows greater height to the bars for a more natural, upright riding position. Some things still feel out of kilter though; the gear lever and rear brake pedal sit a little too low in relation to the new pegs, so take an adjustment in your foot positioning, while things like a lack of slack in the handlebar cables mean a limit in how tall the bar risers can be.

It's a reminder that this bike started out as a commuter, not as an off-road bike, and so there will always be a compromise and a limit to the transformations that can take place. It'd be wrong then to call this bike an out-and-out off-road machine, but having said that, the machine has been ridden across Australia's notorious Simpson Desert, as well as across America on the Trans America Trail. So it can do it, and at the same time delivering 80mpg and with a steel subframe strong enough to carry all your gear.

The 47bhp CB500X isn't going to appeal to everyone, nor set the world on fire with its performance, but for actual real-world adventures, with the Rally Raid kit fitted, it's already proven itself a capable machine. 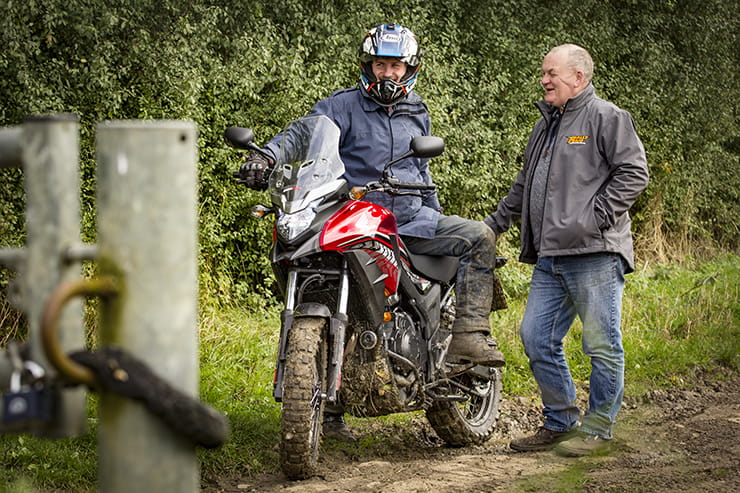 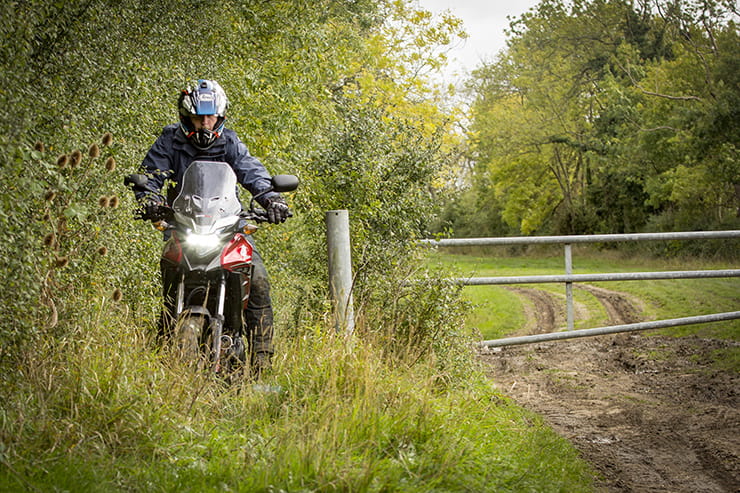 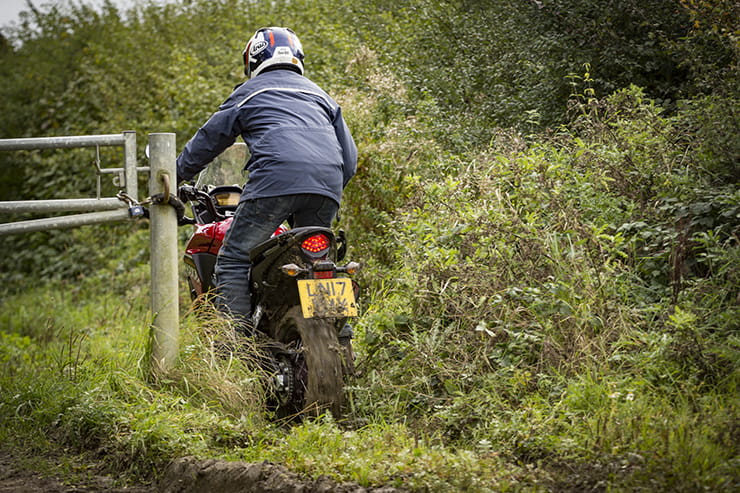 The question is, are the upgrades worth it, as by the time you've bolted all that to a brand new £5,799 CB500X you're not far off the price of a nearly-new Africa Twin, or a Triumph 800XCX?

In outright performance terms, and even in value terms, then no, perhaps not, but the 500X is a different bike, aimed at a different rider. Maybe an older rider, or a shorter rider, or someone who wants the adventure but not the weight of those other bikes. Equally, those on a limited budget could pick and choose the bits they need; perhaps improved Level One suspension and grippier Rally Raid foot-pegs would be enough to feel the improvements. Or they could buy a second-hand CB500X for a touch over £3000 and spend the same on the full Rally Raid treatment.

Either way, this is an interesting project by Rally Raid, backed up by John's sound engineering and enthusiasm. It's a model the manufacturers couldn't build themselves because they'd always look to compromise on quality for the sake of cost. Here there is no compromise on component quality, and given the extra dimension given to the CB500X, it'll be interesting to see what Rally Raid does with the BMW G 310 GS it’s currently working on. Watch this space.