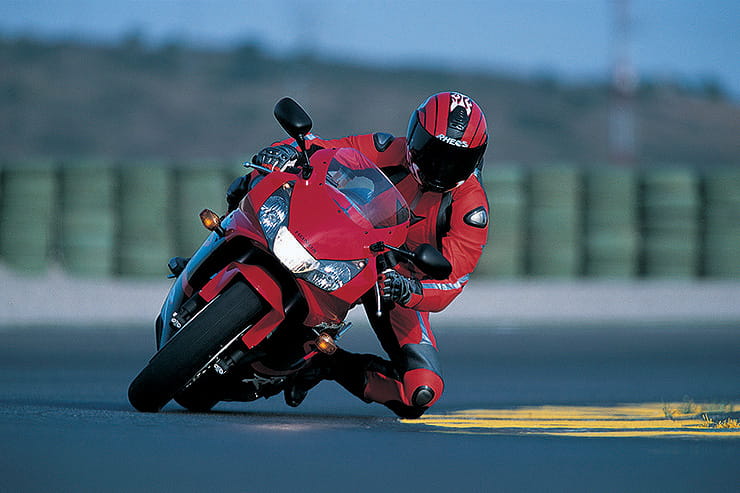 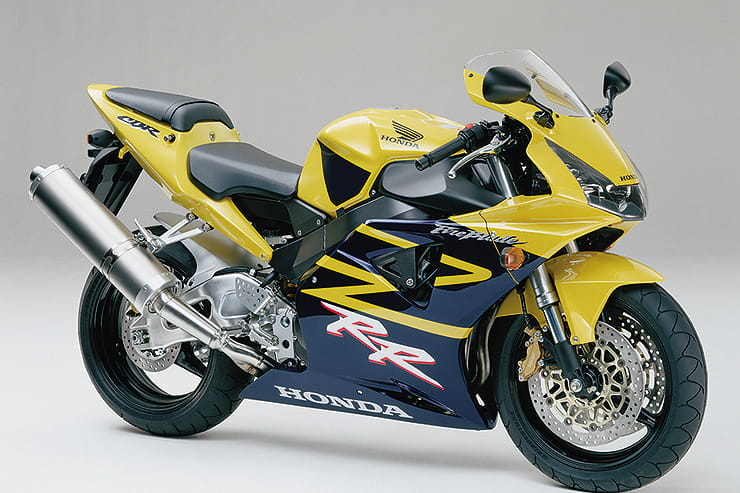 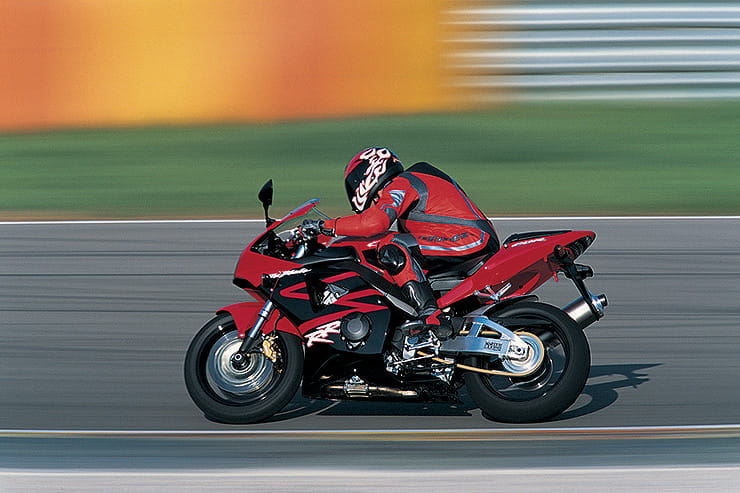 To many (FireBlade creator Tadao Baba included) the 954 is the best FireBlade ever built and is a fitting culmination of eleven years of time and effort. What makes it so special? After piling on the pounds and losing its way in the 1990s, this bike returned the Blade to the sharp end of the sportsbike battle thanks to its philosophy of ‘total control’. One of those bikes that as soon as you throw a leg over it you just can’t help but enjoy, the 954 hits the magic balance between sporty and practical (it even has a hinged pillion seat with ample underseat storage) and is just plain fun to ride as well as being built at a time when Honda lived up to its reputation for quality. The 954 is, quite rightly, regarded as the quintessential FireBlade model.

Annoyingly, due to the fact that the 954 is so highly regarded (much like the Suzuki GSX-R1000 K5/6) prices have become over-inflated as ‘future classic’ status is attached to it. There are a few bargains to be had in private sales, but dealers tend to ask somewhat optimistic prices. There is often little difference between a 2002 and 2003 model’s price tag (they are identical aside from colours) so look to pay upwards of £4000 for a tidy one in a private sale with dealers asking for just short of £5000. You can pick them up for closer to £3000 but the mileage will be over 30,000 and really you are better off saving up a few more quid to get a good one. The older FireBlade 929 model may tempt you as it is cheaper, but the bigger capacity 954 motor is much better and worth paying more to have.

With a 1mm bigger bore taking the 954’s capacity up to, err, 954cc from the 929’s (can you guess it?) 929cc the later bike is noticeably more powerful in its midrange. Honda claimed 152bhp with 76lb-ft for the 929 and 155bhp with 78lb-ft on the 954 but this small peak increase doesn’t tell the whole story and it is in the mid-range the 954 is really boosted. Low-revving compared to a modern litre bike and more than happy to pull top gear from right down in the rev range, riding the 954 is a far less frantic experience and that makes it a brilliant road bike that is fast without demanding to be going at over 100mph everywhere just to get its motor on song. The fuel-injection system isn’t great and certainly benefits from a bit of dyno time and a fuelling module to reduce the snatchy throttle response, but overall it is a wonderful engine.

Thanks to some excellent Honda engineering the 954’s engine and gearbox is very solid indeed with only a very few owners reporting second gear going astray. There are a few comments on forums about the usual reg/recs, alternators and generators failing but this is to be expected on a bike that is getting on for 20 years old now. The gearbox should be nice and slick and if it isn’t then that can be a worry but other than ensuring there are no warning codes on the dash (items such as the cam sensor can be surprisingly expensive to replace) you should be safe. One major worry is the exhaust, which has Honda’s H-TEV exhaust valve (it’s an EXUP by another name) and likes to seize shut if the bike is left standing. Always ensure it is opening and shutting freely and again, watch for a fault code that indicates it might be seized as it can be a nightmare to free up. The valve-clearance service is due every 16,000 miles so be wary of a rattily engine as that could be a worn top end or a cam chain tensioner requiring changing. 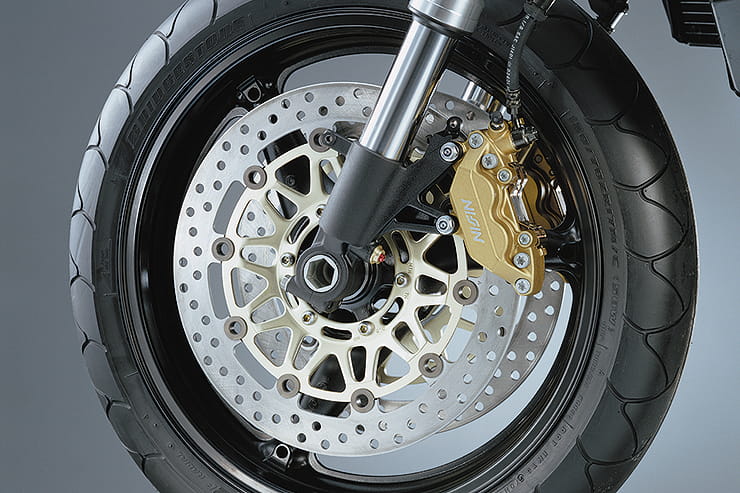 Considering it is a sportsbike, the Blade is pretty easy on the fuel and you should be able to record mid-30mpg figures due to the fact you aren’t thrashing the motor thanks to its low-end power. Figures just over the 40mpg mark are also fairly achievable.

Throw a leg over the 954 and you will feel instantly at home as it just seems to fit all shapes and sizes of riders. This model returned Honda’s sporty side to the Blade line-up after some fairly bloated mid-1990s examples and when you hit the bends on a 954 it is a really lovely experience. Fast turning and agile, the 954 can be a touch flighty over bumps, so fitting a steering damper is most certainly recommended and always check the head bearings aren’t worn, however it is this slightly lively nature that makes it far more engaging and enjoyable to ride than some more modern examples of the Blade. The suspension works well (watch out for cracks in the fork legs around the pinch bolts) and is fully adjustable so can be fine-tuned to your own weight/riding style to make it even better. As you would expect on a fairly old bike you need to ensure the fork seals aren’t leaking (wipe them with some tissue after a test ride) and that the shock isn’t duff but overall, there is little not to love about the 954’s chassis.

With radial brakes still to hit the mainstream motorcycle world, the Blade gets Nissin’s four-piston conventionally-mounted calipers – and there is absolutely nothing wrong with this at all as even the SP-2 had the same stoppers! By now they will be in desperate need of a set of braided lines and probably some high friction pads as they will be starting to show their age, but aside from worn discs needing replacing there is little to fear and lots to love about this set-up. 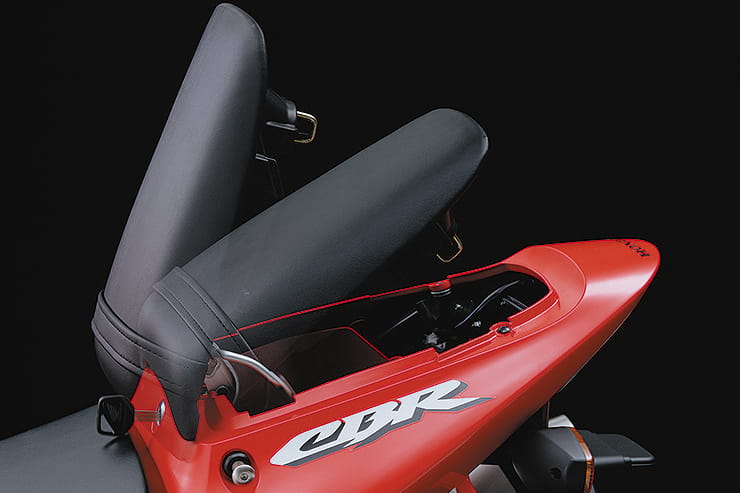 Obviously the Blade is a sportsbike and that means quite a narrow spread on the swept-back clip-ons and also they are reasonably low-set, however it is far from uncomfortable and if you add a taller screen the Blade is very practical. You can easily fit a lock under the seat for added security and a lot of riders go with throw-over luggage for a weekend away. Yes, it’s a sportsbike, but it is also a very good all-rounder.

There are no rider assists on the Blade so the major worry in terms of electrics are poorly fitted, or aging, alarms. Theft was rife in the early 2000s and most Blades have an alarm/immobilisor fitted which while a good idea are very often faulty by now. Get it removed and if you are worried, replace it with a modern system that will be far more reliable. Other than this, the only thing to upgrade a  954 Blade with is a steering damper and taller screen if you cover lots of miles. These attached, just fill it up with fuel and enjoy!

There is an argument that the 954 is over-priced considering it is a fairly old sportsbike, but it is costly for a reason. A simply lovely bike to ride, the 954 is beautifully built, totally reliable and still fast enough to thrill. This was the last of the ‘old-style’ FireBlade models and it feels like a thoroughly developed machine that has evolved over the years into a very special final product. Over-priced? Maybe. Worth paying extra for? Definitely. 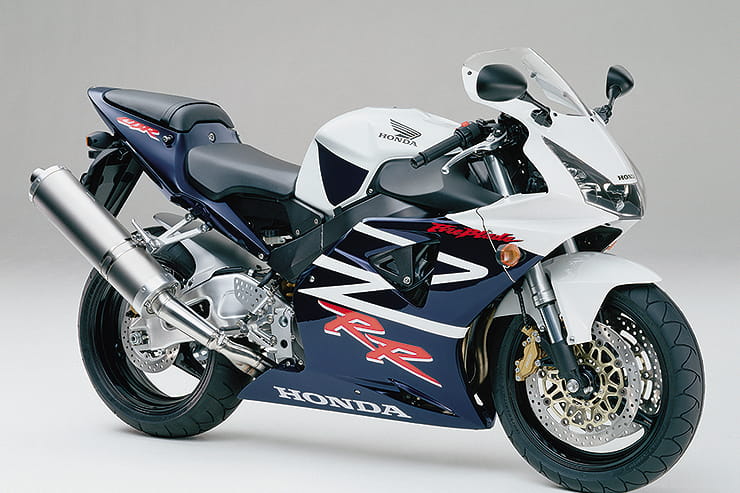