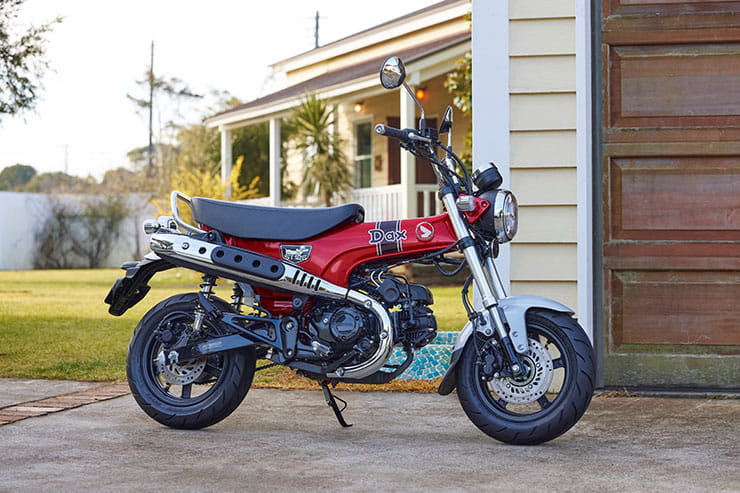 Way back in December 2020 BikeSocial revealed that Honda was planning to introduce a new ST125 mini-bike that would revive the Dax name that became an icon of the 1970s. More than a year on and Honda has done exactly that.

Our original story was sparked by Honda’s decision to trademark the term ‘ST125’ as well as the ‘TrailSport’ name previously used in the American market on the 1970s ST90 Dax. The ‘Dax’ name used in Japan and Europe was coined following suggestions that the original ST50’s small wheels and the long, nearly horizontal main frame spar resembled a dachshund. The idea was reflected in a logo showing a helmet-wearing dachshund with wheels instead of legs – something that’s carried over to the new ST125 Dax model.

Honda’s decision to revive the Dax comes on the heels of the success of its MSX125 Grom mini-bike and the newly developed Monkey 125 combines the Grom’s engine with a classic look from half a century ago. The Dax does the same thing, and just as the original ST50 Dax happily sold alongside the Z50 Monkey through the 1970s after its launch in 1969, the new model is distinct enough from the current Monkey 125 to have an appeal of its own even though both machines share the same mechanicals and hark back to the same era.

The Dax’s history dates back to 1967 and the introduction of the Z50M Monkey in America, which led to calls for a larger, more comfortable version capable of carrying passengers. By 1969 the ST50 and ST70 Dax models were ready for launch (the larger model was to be called CT70 or Trail 70 in the US market).

Like the new model, those initial Dax machines had an unusual pressed-steel spine frame that housed the fuel tank, as well as a centrifugal clutch.

In 1972 the larger ST90 was introduced as the Mighty Dax, or TrailSport in the US market, complete with larger, 14-inch wire wheels and block-tread tyres, plus a four-speed transmission instead of the original three-speed, but it was short-lived, disappearing from the range in 1975.

The original ST50 and ST70 lived on until 1981, and that was the last time the Dax was seen in Europe, but Honda kept returning to the idea. The US-market CT70 lived on until 1982 and made a comeback from 1991-1994, to be followed by a revived version of the ST50 for the Japanese market, on sale from 1995-2003. Those models were all effectively the same as the 1969 originals, with just a few tweaks, but the 2023 ST125 Dax is a genuinely new machine despite its retro style. 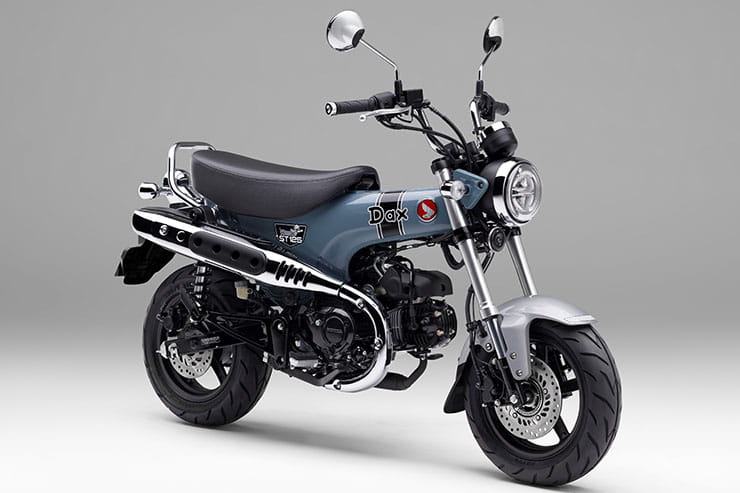 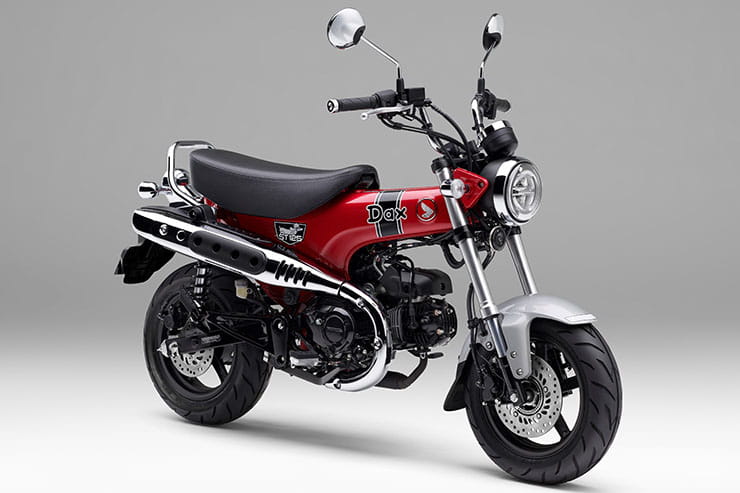 If you’re in the market for a Dax you’re not expecting superbike power, but for the record the ST125 achieves a peak of 9.25hp comes at 7000rpm.

Max torque is 8lbft, arriving at 5000rpm. The figures are within a whisker of the Grom, Monkey and Super Cub 125, which all share essentially the same engine, although for the sake of comparison the Dax’s 9.25hp power is identical to the Monkey’s but fractionally lower than the Super Cub and MSX125 Grom, which both make 9.7hp. 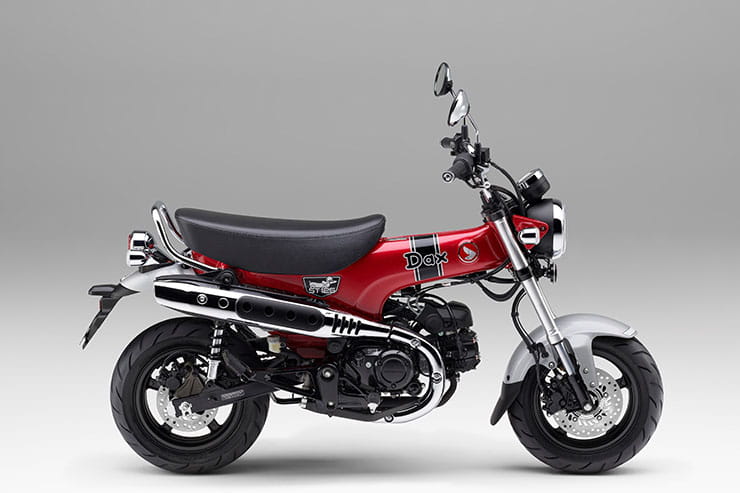 The new ST125 Dax gets its power from the 124cc, SOHC, air-cooled single that’s also found in the Super Cub, Monkey and Grom. It might look familiar, but the 2021 Grom introduced a new 50mm bore and 63.1mm stroke – replacing the previous 52.4mm and 57.9mm – and got a host of other changes to suit Euro 5 emissions rules. The Super Cub and Monkey followed suit for this year’s models.

A big difference between the bikes comes in the transmissions, though. Where the Monkey uses the conventional clutch and 5-speed box from the Grom, the Dax gets the centrifugal clutch and 4-speed transmission from the Super Cub 125. It’s a transmission that has connections to Hondas of the past but also offers a halfway-house between the visceral interaction of a manual change and the convenience of a twist-and-go. You still stomp into gears and get to choose when the ratios are changed, but the centrifugal clutch means stop-and-go traffic is easier to cope with.

Like the original, that exhaust is a high-mounted, long pipe with a perforated chrome heat shield to avoid burning your right calf. 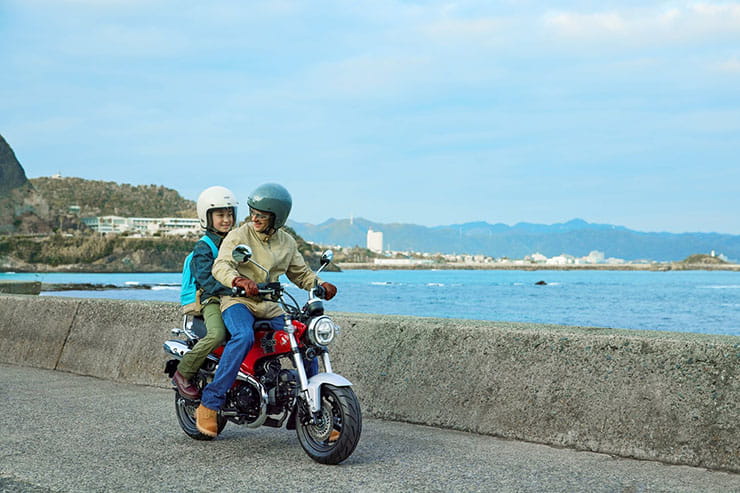 In terms of dimensions, there’s little to split the Dax and Monkey. The former is a little longer at 1760mm against 1710mm, reflecting its longer seat, but its width and height are within a centimetre of the Monkey. The seat height is identical at a low 775mm, and the rake and trail are close – 24.9 degrees of rake and 84mm trail for the Dax, 25 degrees rake and 82mm for the Monkey. At 107kg wet, the Dax is 3kg heavier than the Monkey; close enough to be unnoticeable in real-world use.

Despite the similar dimensions, the Dax’s frame is completely new, reviving the pressed steel, T-shaped look of the original model with the fuel tank hidden inside the chunky top rail.

The suspension spec is also similar to the Monkey, with upside-down forks at the front and twin shocks at the back, while the Dax borrows the Grom’s five-spoke alloy wheels instead of the Monkey’s 10-spoke design. While they’re still 12-inch wheels and the same width as the Monkey’s, the Dax has slightly lower 70-profile tyres instead of the 80-profiles of its sibling. 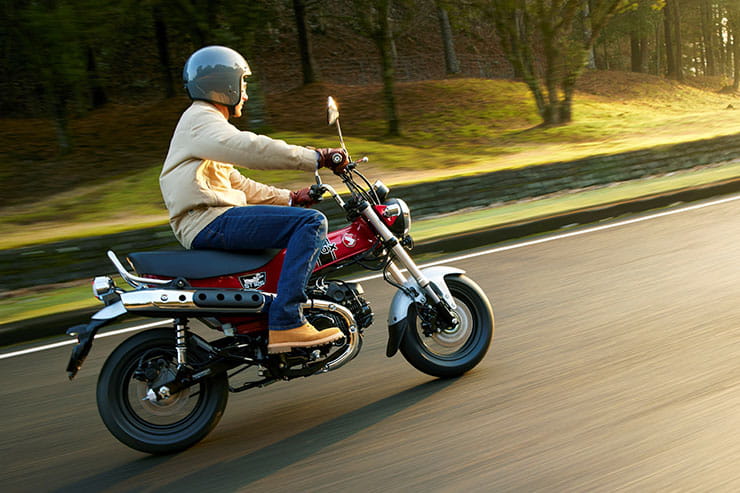 With no separate tank like the Monkey, the Dax’s fuel capacity is rather smaller – 3.8 litres compared to 5.6 litres – but even so the bike’s parsimonious fuel consumption of 180mpg means it’s theoretically good for 150 miles between stops if you’re brave enough to try. That’s likely to be at least three hours in the saddle – probably more if you’re eking out the range – and even though the Dax targets bigger riders than the Monkey is aimed at, that’s going to be on the brink of masochism.

Unlike the single-seat Monkey, the Dax also offers provision for a passenger, with a chrome grabrail behind its relatively long seat, and there’s a hint of practicality in the covered drive chain that keeps it clear of loose clothes.

As on the Monkey, the brakes are discs at both ends – a significant upgrade on the cable-operated drums of the original Dax. At the front there’s a single 220mm disc with a two-piston caliper, while the rear has a 190mm disc. ABS, something else that would be inconceivable on the old Dax, is also standard, using the same IMU-based system that debuted on the 2022 Monkey. 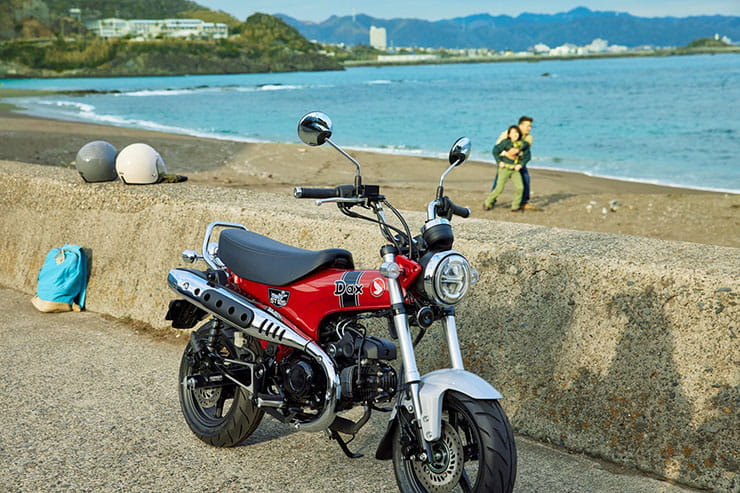 There might be an IMU (inertial measurement unit), but that doesn’t mean the Dax has the sort of six-axis movement measurement and the resulting cornering ABS or traction control modern superbikes often benefit from. Instead, the IMU is simply monitoring the bike’s attitude, helping prevent rear-wheel lift when you hit the brakes hard; like the Monkey, the Dax has a short wheelbase and high centre of gravity, and the IMU is there to prevent the unintentional stoppies that combination could otherwise lead to.

Other 2020s tech appears in the form of full LED lighting, and you can even spec heated grips as an optional extra.

Officially, the Dax is a 2023 model year bike – making an early start on Honda’s new machines for next year. It’s set to be offered in two colours, pearl red or pearl grey.

While there were plenty of machines from rival companies to compete for the Dax’s market back in the 1970s – stuff like the Suzuki MT50 and Kawasaki KV75 – today’s road-legal mini-bike market sees the main competition come from the Dax’s sister models. Anyone considering one is also likely to have the MSX125 Grom and Monkey 125 on their shopping list, while the semi-auto gearbox also means the Super Cub might be under consideration.

Other manufacturers have little to compete with it. Benelli’s TnT 125 is one of the few alternatives out there, but it’s more of a Grom rival really. That means if you want something like a Dax, the only real choice at the moment is… a Dax. 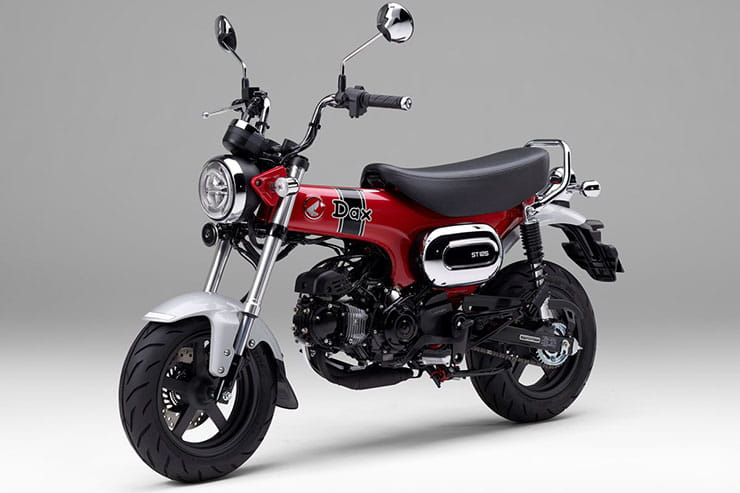 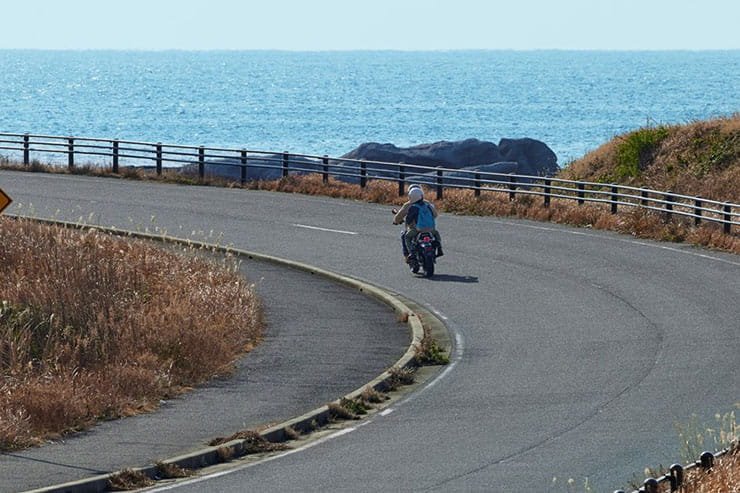