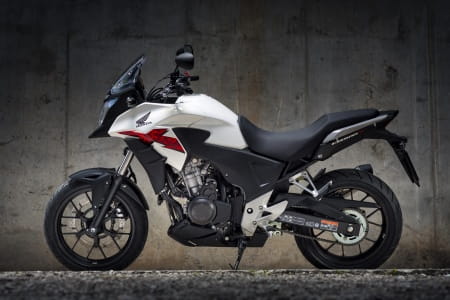 Honda certainly aren’t daft when it comes to tapping into an emerging market, or making the best use of their tooling, cash and engines. The CB500 range is a good example of how to make one bike and turn it into three very different machines to make it appeal to diverse customers, a lucrative and very clever business concept.

The CB500X was the third A2 class bike to be launched in 2013 as part of the new CB500 range and it features the same basic engine, chassis and cycle parts as the CBR500 and CB500F. Three well-built, great looking bikes all for around £5000, an absolute bargain. The CB500X is the perfect machine to tempt novice riders on to two wheels, its cheap enough, has enough power to take full advantage of the A2 licence regulations and looks like a proper adventure bike - albeit slightly smaller and much less intimidating to ride. It’s low, light and nimble so should appeal to anybody new to riding, but will also suit riders looking to downsize, or returning riders who want something capable for not a lot of money, and let’s face it, £5000 isn’t a huge lump sum to find for a brand new Honda, albeit one built in Thailand.

Up close the new bike is every bit as good to look at as it is in the photos, Honda haven’t skimped on build quality to keep costs down. The bike is well finished, stylish, modern and comes with ABS as standard. The riding position still retains that adventure bike feel with an upright riding position, which gives you a good view and a feeling of control. It’s not too tall though (seat height is 810mm) so it shouldn’t put novices off and at 5’10” I was able to touch the floor easily enough. 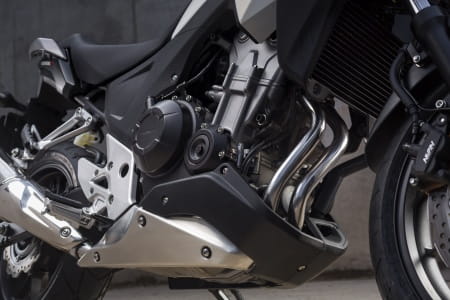 The CB500X may not be large in capacity but it has a fairly strong engine with a linear power delivery so it pulls well enough. Keep it in the right gear and the bike powers along quite nicely, hit 6,000rpm and you’re rewarded with a nice induction roar and it’ll quickly get up to the redline. Get your head down and you’ll see 107mph on the LCD clock, so it’s not too slow and you can still have plenty of fun. MPG is quite a big selling point these days and during our ride around sunny Spain the classy looking on-board computer was reading at 5.2 litres per 100km, which works out at a little over 47mpg. This was whilst riding hard though, spending most of the time in third and fourth gear because of the twisty roads, so I’d expect to improve on that significantly if I wanted to conserve fuel/money, rather than enjoy myself! Honda claim 76.3mpg.

The brakes are superb, loads of feel, plenty of bite and they also have the Honda ABS system to back them up, I never felt it cut in during my time on board but the Honda system is so refined that it’s hard to notice it anyway, it’s just there to help if and when needed without getting in the way of the riders enjoyment. The 500X comes with Pirelli Scorpions as standard and on the dry roads they stuck like glue, no cause for complaint there. Suspension is another area worth complimenting, the X has a bit more travel then the rest of the CB family, as you’d expect from an adventure bike but it felt very good around the mountain roads and believe me the whole bike got a thorough work out during our day in the saddle.

As far as I’m concerned this bike, (or at least the CB500 family), gives the perfect blend of big name manufacturer, great build quality, low price tag and decent performance rolled into one (or should that be three?) perfectly good A2 licence friendly package. If you don’t need superbike performance but want a dependable and stylish bike on a budget then the CB500X is one bike to have a closer look at.